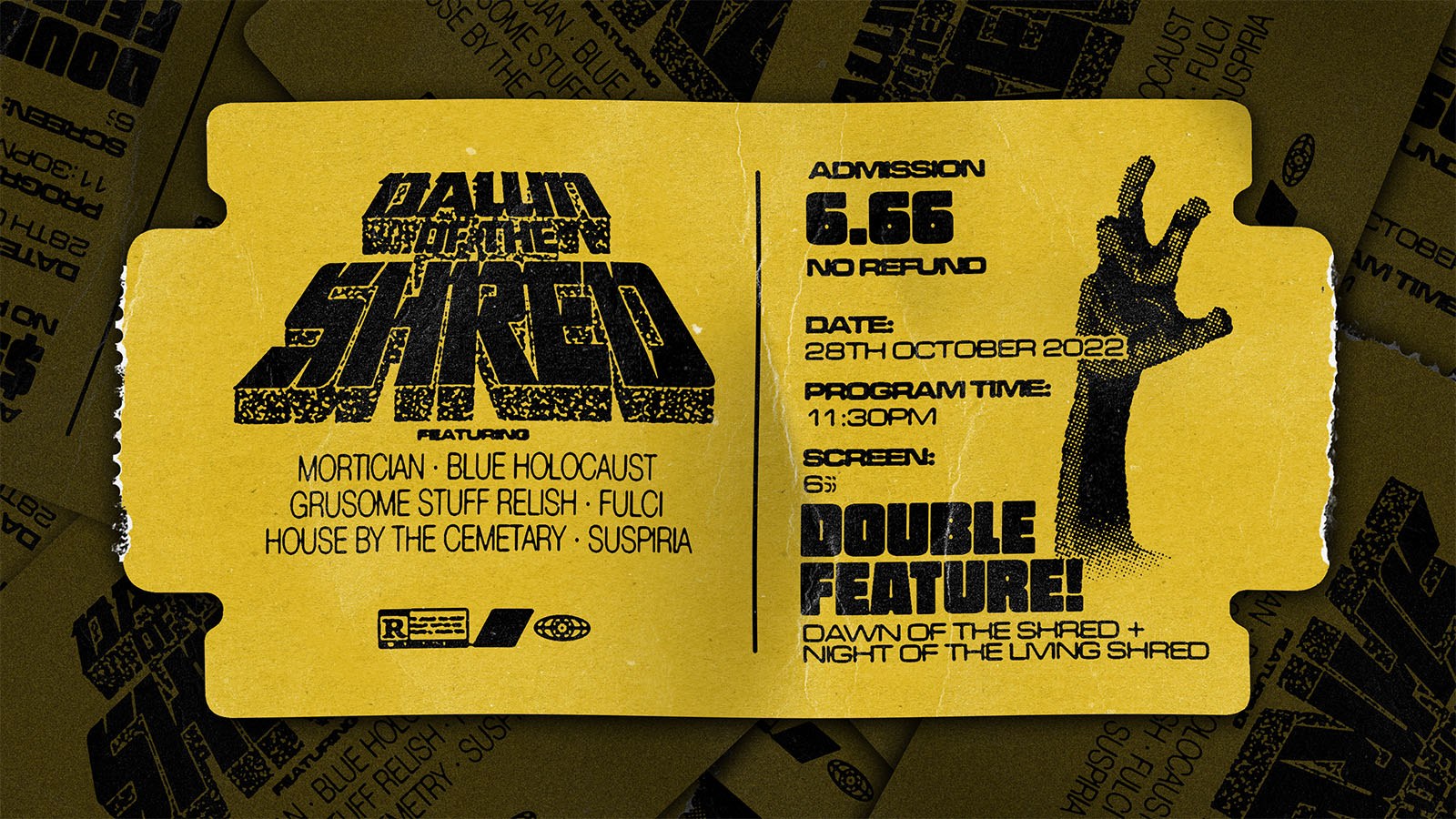 Sometime in the 1960s, Mario Bava’s anthology film Black Sabbath (1963) trickled its way into the cineplexes of working-class Birmingham, England, where it was seen by Geezer Butler. Butler was the bass player for a heavy, blues-based rock band called Earth, but when they kept getting mistaken for another group bearing the same name, they rechristened themselves Black Sabbath. Thus began heavy metal’s long and fruitful symbiosis with Italy’s Giallo cinema. Black Sabbath wasn’t quite a Giallo in the modern sense, and the music Black Sabbath played wasn’t yet being described as heavy metal back in 1970. But both Bava and Butler’s band would soon come to define their respective genres.

As the ’60s gave way to the ’70s, a generation of Italian directors, including Bava, Dario Argento, and Lucio Fulci, gave the Giallo its identity. Their movies were visually striking, lurid horror films that moved with a deftness that belied their gruesome subject matter and often convoluted plots. Bava’s A Bay of Blood (1971) and Blood and Black Lace (1964); Argento’s Deep Red (1975) and Suspiria (1977); and Fulci’s Gates of Hell trilogy (1980-81) helped define the Giallo for the international moviegoer. A subsequent generation that included Michele Soavi (Stagefright, 1987), Lumberto Bava (Demons, 1985), and Joe D’Amato (Anthropophagous, 1980) pushed the Giallo even further in directions both absurd and abhorrent. Giallo may have begun as a distinct subgenre of Italian horror, but it soon became a catch-all term to describe any movie that displayed the boundary-pushing instinct the country’s filmmakers all seemed to share. Metalheads could relate to that impulse.

Black Sabbath may have started the relationship, but the explosion of death metal in the late 1980s made horror and metal practically synonymous. The first track on Seven Churches by Possessed—often thought of as the very first death metal album—is “The Exorcist,” and it samples the iconic Mike Oldfield keyboard motif that haunted William Friedkin’s film. Two years later, Death would initiate the genre’s Big Bang with Scream Bloody Gore, a dizzying barrage of warped thrash riffs and maniacal vocals. Notable among its horror-obsessed track list is “Regurgitated Guts,” a song whose lyrics recount the plot of Fulci’s City of the Living Dead (1980). (“Suicidal preacher hangs himself/ Unfaithful servant goes straight to hell”—spoiler alert!) Giallo had officially, explicitly infiltrated death metal—and the bands who would follow Death down that path took that kinship even further.

Soon, a wave of death metal bands whose obscure horror movie samples were nearly as important as their riffs would emerge, and many of them had a particular fixation on Italian splatter flicks. Other bands would turn to the scores of synth masters like Fabio Frizzi and Claudio Simonetti for inspiration. The Giallo movement had mostly petered out by the ’90s, but new bands have continued to form around their appreciation for one of the world’s great horror traditions.

No one pushed death metal’s horror-sample fetish further than Mortician, whose songs frequently allowed minutes of dialogue from a gore flick to play uninterrupted before a single note of music came in. Though by no means exclusively fixated on Giallo, the band has sampled Fulci and Argento extensively and shined a light on lesser-known filmmakers like Antonio Margheriti (Cannibals in the Streets, 1980) and Bruno Mattei (Rats: Night of Terror, 1984). Mortician’s nightmarish samples give way to some of the most guttural, brutal death metal ever committed to tape, and their stomping, hardcore-adjacent sound has been a key influence on rising stars like Sanguisugabogg and Mutilatred.

Spain’s Gruesome Stuff Relish called their first album Teenage Giallo Grind and their members took on stage surnames of Deodato and Argento. Suffice it to say they’re fans of Italy’s splatter cinema. Their gurgling, squelching brand of goregrind is heavily indebted to Carcass’ Reek of Putrefaction, but instead of focusing on medical anomalies, Gruesome Stuff Relish sing primarily about Italian horror. They’ve been on that same tip for 20 years; Teenage Giallo Grind is the obvious starting point for their discography, but last year’s Kill Baby Grind kept the carnage coming with tracks like “Giallo Nightmares” and “A Cat in the Brain,” named for a 1990 oddity by Fulci.

Gialli were frequently retitled for release in international markets, but fortunately, the French band Blue Holocaust are dedicated film conservationists. Their name comes from the lesser-known title of D’Amato’s grim Beyond the Darkness, and the title of their debut album, 2004’s Twitch of the Death Nerve, was the much better original moniker for Bava’s A Bay of Blood. Like Gruesome Stuff Relish, Blue Holocaust play a particularly raw and brutal permutation of goregrind. The film history lesson you get with your bludgeoning is an added bonus.

Named for Argento’s 1982 murder mystery Tenebrae, Italy’s Tenebro head up a vanguard of newer death metal bands who are turning to Giallo cinema for musical and lyrical inspiration. Their debut, the crushing L’inizio di un incubo, just came out earlier this year. Clearly influenced by Mortician and Impetigo, as well as the menacing lurch of early Cannibal Corpse, Tenebro are emblematic of the back-to-basics approach that’s dominating the old-school death metal revival in 2022. L’inizio di un incubo is no less effective for its simplicity. Songs like “Necrofilia” and “Demoni” are ghoulishly effective exercises in death metal precision, with riffs that cut to the bone.

FULCI take the Giallo theme a step further than most of their peers. Every one of their albums is a concept record based on a different film by Lucio Fulci. After tackling City of the Living Dead with 2015’s Opening the Hell Gates and Zombi 2 (1979) with 2019’s Tropical Sun, the Italian band based last year’s Exhumed Information on a much less-seen Fulci joint—his 1991 ghost-story Giallo Voices from Beyond. They teamed up with the synthwave project TV-CRIMES for the album to evoke the film’s pulsing, electronic score, but it’s still crunching, old-school death metal that lives at the center of the FULCI sound. They’re a high concept project, but they can swing the hammer with the best of them.

House by the Cemetary

House by the Cemetary is a Rogga Johansson band. For the uninitiated: Johansson plays in—and this is not a joke—no fewer than 50 bands at any given time. (Paganizer is probably the most famous one.) Rise of the Rotten, House by the Cemetary’s [sic] ripping debut, is as good a place to start with Johansson as any. He was a teenager in Sweden as bands like Entombed and Dismember were defining the sound of the country’s death metal scene, and you can hear that in his guitar tone and melodic phrasings. House by the Cemetary are named for the balletic closing chapter of Fulci’s Gates of Hell trilogy, and while their death metal is perhaps less atmospheric than the film that is their namesake, it’s every bit as terrifying.

The newest band on this list just said, “fuck it” and went and named themselves for the most famous Giallo of them all. Lawndale, California’s Suspiria only have one demo under their belt so far, but it’s an inspired flash of the blade, drenched in the red light of Argento’s masterpiece. They eschew death metal for a Devil Master-style metalpunk, but their existence only confirms the long shadow of the classic Gialli—and the pliability of their inspiration.