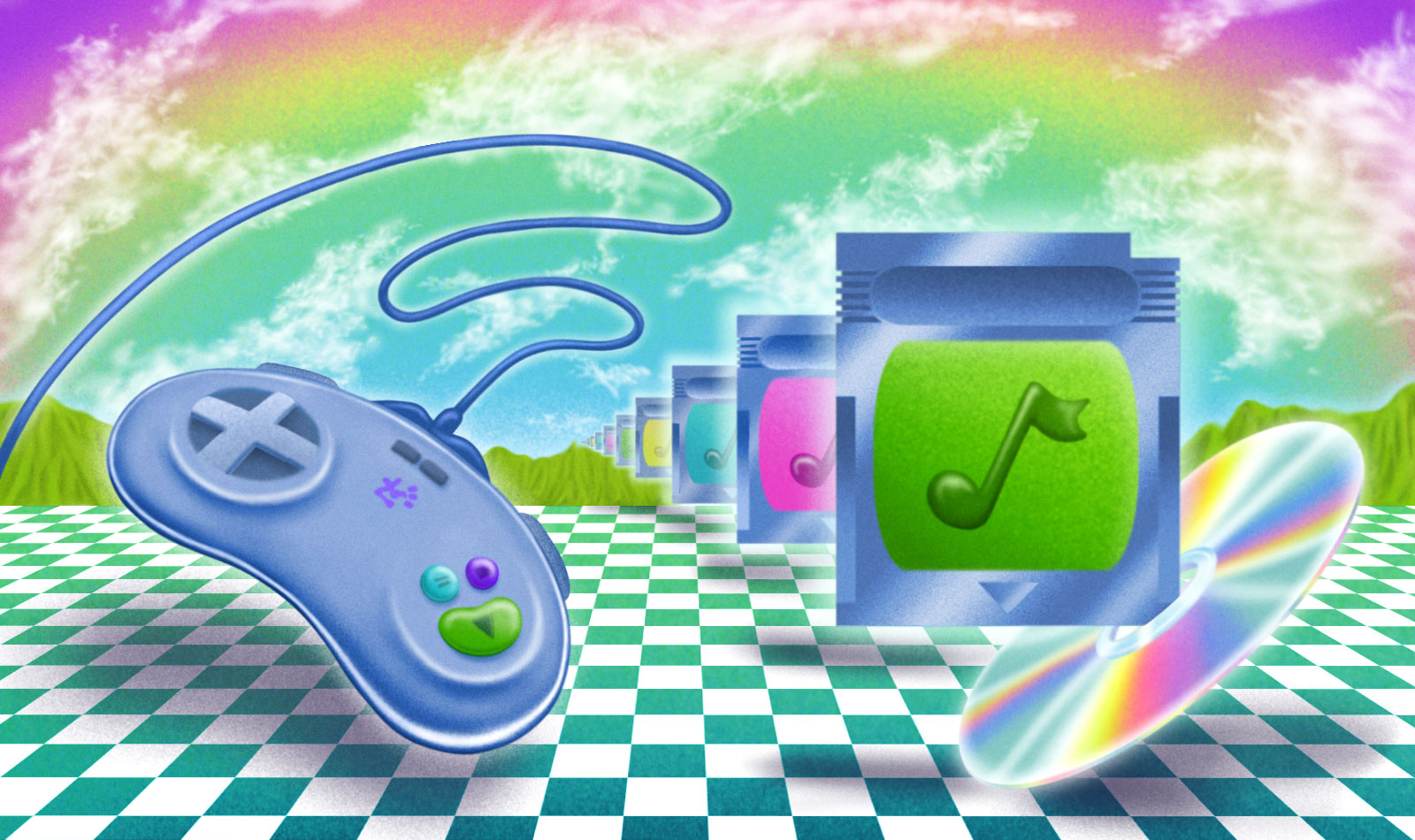 With the meteoric rise of virtual reality and Twitch, the arrival of (and subsequently overwhelming demand for) souped-up, ninth-generation consoles, and the rapidly expanding indie renaissance on platforms like STEAM, the world of video games encompasses one of, if not the, dominant forms of cutting-edge global entertainment. What was once the stuff of geeks has expanded into a cultural canon in its own right, inspiring movies, visual art, memes, and of course, music. Simply put, in 2021, gaming (and by extension, video game music) is synonymous with innovation. Denis Karimani, otherwise known as the VGM wizard Remute, belongs to a new generation of artists who have found inspiration not from the medium’s future, but from its distant past, taking physical cartridges from early systems (the Sega Genesis, Super Nintendo, and Gameboy being the most popular) and and filling them with original music.

A “born geek” from Hamburg, Germany, Remute’s background is in techno: Prior to his 2019 pivot to making video game music full-time, he spent 15 years recording for notable techno labels like Tresor and Ladomat 2000. He was always inspired by both video games and video game music, but was unable to fully integrate them into his sound due to the technological limitations of the time. “Back then, the only thing I could do was sample some sound effects here and there and try to sound like some video games, but I wasn’t able to make music directly from the game console.”

That changed in the early ‘10s, with the advent of tracker programs for the MegaDrive and Super Nintendo, which engage directly with the consoles’s sound chips. As Remute explains, “It’s not that kind of music programming where you directly communicate with the sound chip; it’s more like coding than making music. This code gets saved onto the chip of the cartridge. When this software became available, I was able to directly communicate with the sound chip and not only record sounds here and there, I had a direct connection to the console.” Unlike chiptune—a popular style of synthesized electronic music created by manipulating the sound chips of old-school consoles like the Game Boy—Remute’s musical spectacle doesn’t stop with the notes themselves. Instead, he seeks to capture the holistic experience of the medium as we remember it; a painstaking process of replication which necessitates assistance from coders, graphic designers, and other 8-bit wizards.

Just like playing a video game, the process of composing and programming music for a decades-old piece of equipment boils down to trial and error. For The Cult of Remute, the first-ever plug-and-play music album for the Super Nintendo, he started off the traditional way, using digital audio workstations and sequencers and jamming on keyboards and synthesizers. These PC recordings were then transferred to a formatted chip that could be read by the console. “It’s like writing music in your mind,” Remute explains. “Of course, there’s a lot of trial and error in the beginning, but after a time, you begin to hear the sound in your mind—and then when you write it down in the program, it’s almost exactly like you heard it in your mind.”

The end result, which resembles a gussied-up version of the sound test menus on most classic titles, is a deeply rewarding listening experience that feels like a game in and of itself—probably because, in some ways, it is. “It’s definitely a different music listening experience than putting on a record or streaming something, because you have to turn on the console [and] put the right cables into the TV set,” Remute explains. “I think it’s kind of an adventure for some people to get the album running.” He laughs, and adds: “In the end, they’re rewarded for their work.” That the music’s power hinges on active engagement, rather than passive listening, is precisely what makes it so special to Remute and his peers. “It’s probably a more rewarding listening experience than the convenient way…it definitely shapes the enjoyment factor of the music when you’re rewarded with some sounds at the end.”

Below, Remute walks us through some notable artists and labels translating original music to video game cartridges. From experimental noise floppy-discs designed to be run on old PCs, to soothing vaporwave albums playable for the Game Boy Advance and Sega Genesis, there’s something for everyone. (For those who don’t have an old-school console on hand, fear not; all of these releases are available digitally as well.)

“Tronimal is an amazing artist from Germany who I discovered a couple of years ago. I think he made the first Game Boy album ever, Hello_World! He’s also an amazing live artist; I saw him a couple times live in Germany. He basically uses a real Game Boy and runs the tracker program Little Sound DJ on it, which allows for live manipulation like changing channels and changing patterns and stuff. It’s very made for playing live: very convenient, very fun to use. When he plays live, he’s just rocking on his Game Boy. He makes much for the Zedex spectrum, an 8-bit home computer from Britain. He’s very talented, and also a very technically gifted guy, and definitely someone I’m looking up to when it comes to gamer music. I think he’s making another album in the next couple of weeks!”

“I’m a huge fan of vaporwave, and I follow a lot of vaporwave artists. This scene is particularly interesting for me, because a lot of vaporwave artists are experimenting with various formats—mini-disks, floppy disks, VHS tapes. And, of course, I really like the music also. One day I stumbled upon OasisLtd.; they’re using Game Boy Advance cartridges, and are also putting videos on [the cartridges], which is pretty amazing. The Game Boy Advance sound chip was, as the name said, pretty advanced; it can portray pretty complex music, like vaporwave. The OasisLtd. releases [designed by artust mingkurray] all have their own style, and I think what’s fascinating here is the mix of video and music. The fact that it gets compressed onto the cartridge is pretty cool; you could probably compare it to a VHS video tape. It’s not the best quality of picture, but on a little Game Boy Advance…who cares? It’s an amazing audio-visual experience. They’re putting out so many cool releases, and they sell out super quickly, but if you follow them, they’re always putting out cool stuff.”

“Basically, every song on this album has its own minigame, which is totally amazing. You can play every song—literally! I also like the music style. It’s not so catchy, but super experimental and funky, and also playful, which fits in with the gamer theme. [Laughs] I also like the overall graphic design, and the fact that he’s producing real chiptune, communicating with the sound chip and coding the music. It’s sort of similar to my approach. It’s a really interesting audiovisual mixture and an exciting artistic concept.

“If you compare it to the albums on OasisLtd., they use pre-recorded sounds produced the classical way, with digital audio workstations and synthesizers, and then recorded as an audio file and transferred to the cartridge. It doesn’t communicate directly with the sound chip, it just gets played back. But on the other side, the music from myself and Mike is just note information data that gets saved in a code on the chip, and then gets played back in real time by the sound chip. Every time, it sounds different. When you give some sheet music to a band, each time they play it, it’s not going to sound exactly the same. Of course, with an electronic device, it mostly sounds the same 99 percent of the time. But that remaining one percent is always different.”

“Diode Milliampere is a very special case. Obviously, he’s not releasing music on cartridges; he’s using floppy disks instead. What’s very interesting about his music is that he’s producing music for the Sound Blaster sound card, which was the first sound chip ever used in PC games. The Sound Blaster sound card is very similar to the sound card on the Sega Megadrive; it uses the same Yamaha sound chip, so the music from Diode Milamperre sounds pretty Mega Drive-like, but runs on a PC. As far as I know, he uses the same technology as myself and Mike; he writes the music on a tracker and the code is generated in real time. Furthermore, the music is just amazing: the sounds he generates from the Sound Blaster are so varied, so colorful, and so interesting. He makes a pretty big range of dance music on the Sound Blaster, and I think I have all of his releases. Very amazing guy.”

“I’m a huge fan of the Commodore 64. It was the first computer I got as a five-year-old from my parents, they told me, ‘Hey, become a programmer,’ so I did. [Laughs] I have pretty fond memories of the C64, and use a lot of C64 programs at home. Of course, I’m following the C64 scene pretty closely, and I stumbled upon this label, DataDoor. DUBCRT was made by a popular C64 artist from Sweden named Goto80, so I had to check it out, because I’m a huge fan of that stuff. The music on DUBCRT is very trippy, very glitchy…I think a lot of the music is getting randomly created, and sounds slightly different every time. It just makes for a unique listening experience every time you turn it on. It’s modern music, a kind of art piece you can turn on any time you’re into it, and enjoy it.”