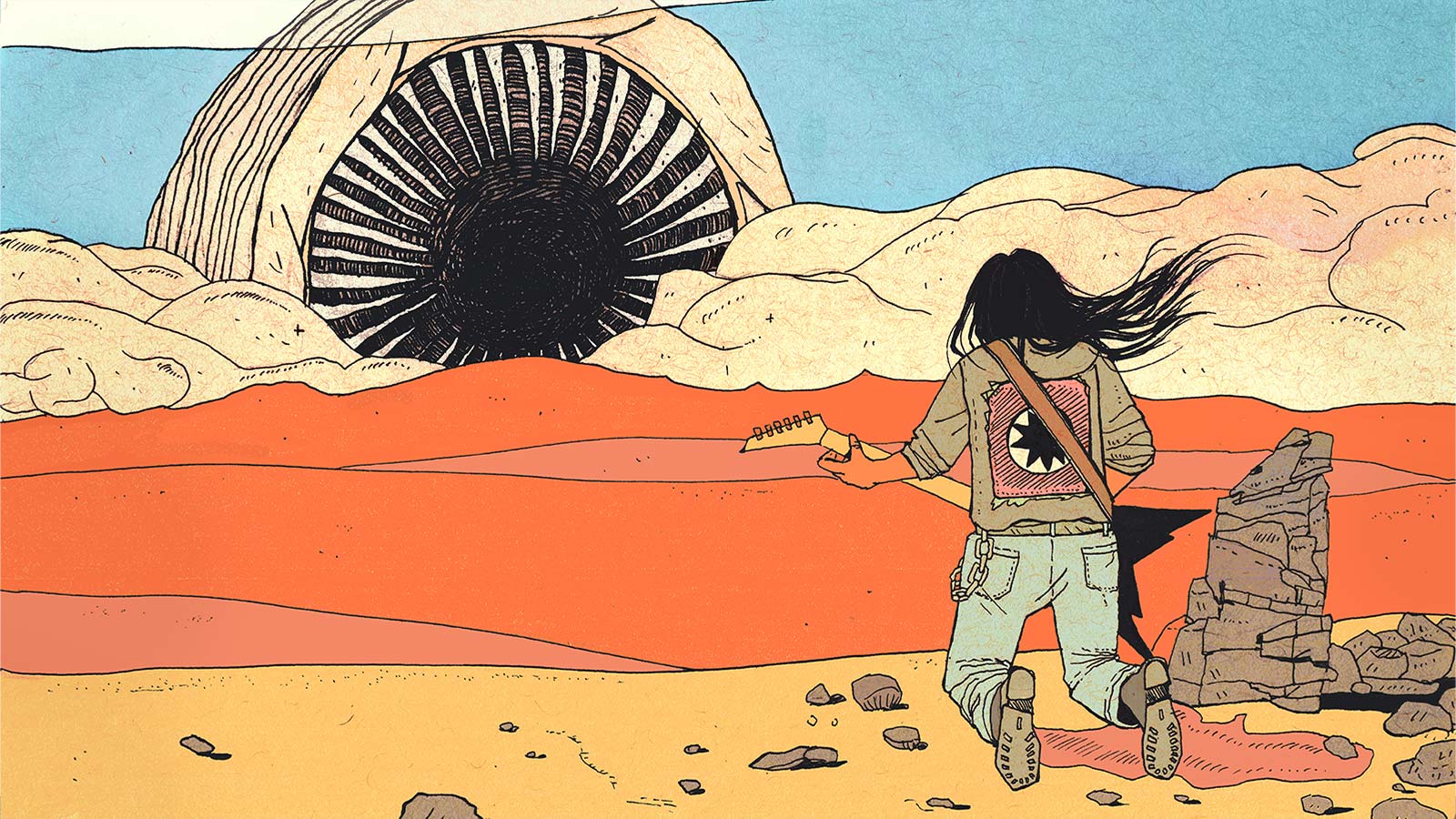 Dune, Frank Herbert’s fantasy tale of intergalactic feudal houses, giant space worms, and blue-eyed desert warriors is one of the most groundbreaking works of science fiction ever written. First published in 1965, the novel went on to spawn several other follow-up books, movies and TV-shows, and its themes, topics and characters would influence countless films, artists, and musicians for years to come.

Set on the desert planet of Arakkis, Dune follows the journey of Paul Atreides, as his family move from their ocean world of Caladan, to oversee the desert planet of Arrakis, the home of the much-sought after Spice Melange. Following the death of his father at the hands of the evil Baron Harkonnen, Paul joins a tribe of desert warriors known as the Fremen, a cast of nomads who are addicted to the psychoactive spice, and who worship the planet’s giant worm-like creatures.

Looking to subvert classical science fiction tropes, Herbert set out to write a book that was about the human condition, rather than just futuristic technology and alien planets. Through the actions of the primary characters’ interactions, Dune details the perils of idol-worshipping, as the protagonist’s story arc grows from that of being a chosen leader to one that is fanatically idolised throughout the galaxy, fuelling Jihads throughout the universe.

Arrakis is a planet full of Middle-Eastern symbolism and religious artifacts, tools Herbert uses to create a complex and alluring world. It’s these depictions of mythology and nomadic life, along with the imagery of giant sandworms, that are referenced the most in contemporary culture. Many of these references are found throughout the metal and desert rock scene, with many artists taking influence from Herbert’s imaginative world building.

With a new film adaptation of Dune by Denis Villeneuve set to be released in late 2021, it’s the perfect time to get familiar with the metal bands that have embraced the the ideologies of Frank Herbert, incorporating his themes and concepts into dark, progressive sounds. Looking beyond bands that have just used the book as an inspiration for their band name, we’ve selected a mixture of new bands that have fully grasped Dune’s deeper notions, to create visionary progressive and black metal sounds.

It goes without saying that Scottish progressive post-metal quintet DVNE have been heavily influenced by Frank Herbert’s work. Starting out as an instrumental three piece, the band were trying to figure out what message they wanted to get across through their music, while coming up with their name. “It felt like we were trying to tell a story, and the best kind of story with us would be something out-of-this-world,” explains singer Victor Vicart, recounting the band’s beginnings.

Drawn in by Frank Herert’s mysticism and mythos, the band took the name Dune, before changing it to DVNE to avoid any confusion with the book. Their first EP, Progenitor, fused a classic desert-rock feel with elements of sub-Saharan bands such as ‎Tinariwen. In 2017, the band released Asheran, a record that toyed with themes of ecology and nature, mirroring the cli-fi (climate fiction) principles within Dune, while retaining a unique narrative of their own.

The band’s latest LP, Etemen Ænka, takes it a step further. “With Dune, you imagine the desert, the Fremen, the Spice, and you kind of feel like you’re somewhere in the Sahara,” says Vicart. The album is a healthy mix of real-world symbolism and science fiction, drawing upon narratives and imagery steeped in Middle-Eastern heritage and fantastical lineage. It’s an album worthy of Dune’s legacy.

Big fans of the Dune saga, Seattle-based doom rockers Sandrider ended up naming themselves after the Fremen wormriders of Arrakis, whom they felt embodied the heavy direction of their music. “Thematically, a little desert warrior surfing a massive sand worm fits the sound of the band pretty well,” says singer Jon Weisnewski.

Throughout the band’s music are lots of references, nods, and little winks to the Dune series. The title of their 2013 LP, Godhead, pays homage to the fourth book in the series, God Emperor of Dune, while “Crysknife,” and “Voices,” two tracks off their debut album, explore the ancient weaponry of the Fremen warriors and the controlling force of the Bene Gesserit witches, respectively. “Not all our songs are about Dune, but when they are, I lean in pretty hard,” Weisnewski jokes.

Sandrider’s other band members, drummer Nat Damm and bass player Jesse Roberts, are responsible for the band’s imagery, which also nods to Dune lore. “The Godhead art is Jesse’s phenomenal interpretation of Leto II as the sandworm-hybrid from God Emperor of Dune,” explains Roberts. “The overall packaging is definitely inspired by the classic paperback novels from the series, and the font choice for our band name is deliberately leaning into that look.”

French stoner-rock band Wormsand were so attracted to the power and force of the giant desert worms of Arrakis, they decided to name their band after them. “We were looking for a band name referring to something massive, and powerful,” explains guitar player and vocalist Clément Mozzone. “And at the same time we also wanted it to be something majestic—something people could worship, too.”

The band’s first self-titled 2019 EP honors their love of Frank Herbet through the record’s artwork, depicting several giant worms writhing through the desert sands. It also mirrors the band’s powerful desert rock, something which is reflected in the band’s lyrical content. “To create our universe, we were also inspired by a lot of futuristic novels, including 1984, Brave New World, Soylent Green, and by dystopian universes in general,” says Mozzone.

In 2018, Denver-based metal band Necropanther wrote and released a concept album based entirely on Dune’s story. That LP, Eyes of Blue Light, plays out as a quasi-space-metal-opera, with singer Paul Anop’s deathly howls touching upon key storylines and terminology from the book. (The album’s title is itself a direct reference to the appearance of the Fremen.) Amongst the tracks, there is the blistering assault of “Gom Jabber,” which tells the tale of Paul Atreides’ pain initiation in brutal fashion, while “Feyd-Rautha” brings to life the Harkonnen warrior who challenges the hero in his bid to become emperor.

The record’s cacophony of double kick-drums, epic shredding and frantic pacing helps conjure a grandiose and operatic soundtrack to the world of Dune. “We wrote lyrics from the points of view of different characters, and the instruments and parts stand in for different themes,” says guitar player Joe Johnson. “Heroes and villains, betrayal and revenge, swordplay and weddings.”

As one of Johnson’s favorite books when he was younger, Dune influenced his outlook on the world and the future of humanity. “The hero’s journey is unique in that it’s his study and application of technique that leads to his fantastic powers,” explains Johnson. “That’s a metaphor for the practice of music, as far as I’m concerned. But then again, what isn’t a technique?”

Chicago producer Luca Cimarusti’s one man black metal project, Annihilus, is rooted in science fiction and fantasy. The guttural, lo-fi, and unsettling music plays with cathartic melodies to create a unique, blistering  wall of noise. In 2020, Cimarusti released his second LP, Ghanima, an explosive yet melodic odyssey which leans heavily on Frank Herbert’s work. The album’s title itself is Fremen for ‘spoils of war’.

The themes from Dune play heavily throughout the LP, from the rasping outpouring of “Wormsong” to the bleak tones of “W.T.W.B.” (“watching the world burn”). “I wanted to bring the massive, lived-in feel of Dune to the sounds I created for Annihilus,” Cimarusti explains. “I try to channel the grimy underworld and the grandiose, epic universe to build songs you can get fully immersed and lost in, just like the Dune tales.”

Ghanima is an album that swings from quiet moments of ambience to brutal moments of darkness, something Cimarusti has done intentionally to reflect the storytelling of Frank Herbet. “I always try to find some sort of balance between light and dark with Annihilus, and I pull a lot of that influence from Dune, since that theme hangs so heavy over the whole story.”