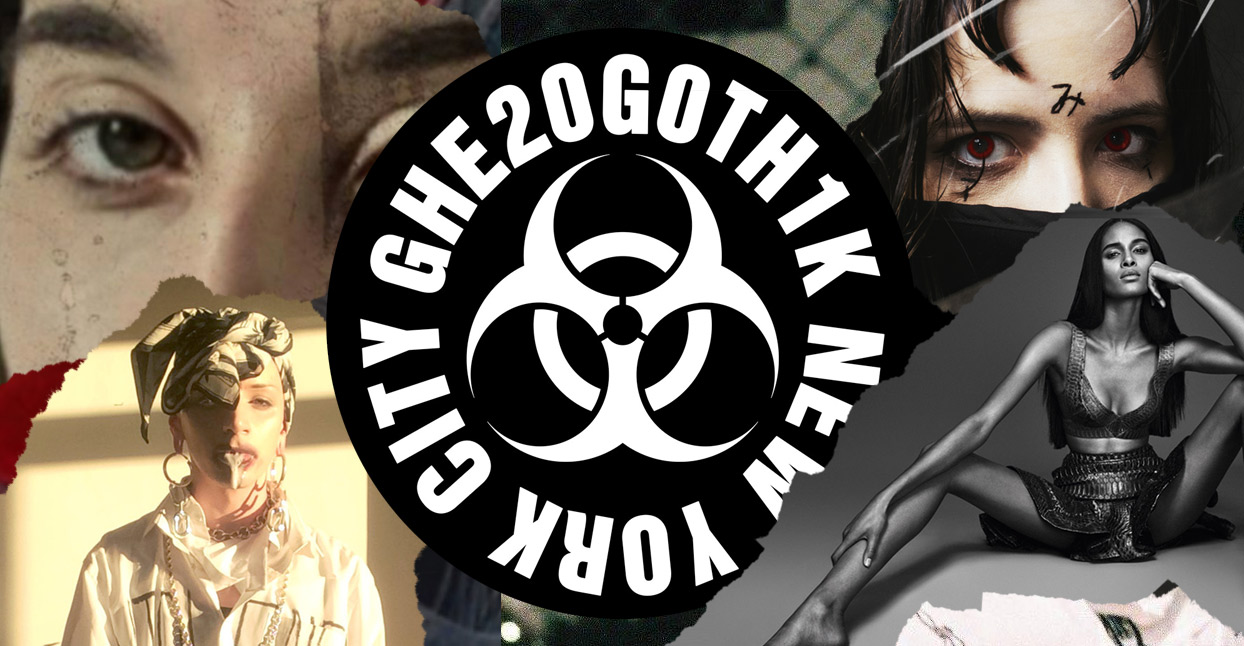 Deconstructed music, also known as “post-club,” was born in a sweaty New York basement where a mix of voguers, punks, and fashion kids gathered to channel their anger and frustration, during a party named GHE20G0TH1K. DJ Venus X and Shayne Oliver, the fashion designer behind Hood by Air, started the night in 2009 as an outlet for their collective feelings of confusion and dispossession in the face of a predominantly white, hetero, and highly formulaic nightlife.

Within GHE20G0TH1K, a new sound and style of DJing was created. The collective reimagined what a party could be, coupling that freewheeling spirit with a radical political attitude that empowered black, Latinx, and queer people. Their mixing style was born out in the CDJ era, using Loop and Cue functions to create outlandish blends. The MP3s they used had a crunchy, cruddy texture when broadcast over a big soundsystem, which came to define their aesthetic. Each member of the collective came from a different background, but they incorporated those differences into the mix, galvanizing a mélange of Jersey club, Baltimore, footwork, and punk, alongside elements of house and techno.

If you think of house and techno as modernism, then deconstructed music and post-club are essentially the equivalent of post-modernism. The genre breaks away from dance music tropes like four-on-the-floor beats, stable tempo, and constant mix with gleeful anarchy, proposing a sonic locus where ballroom breaks, field recordings, rap a cappellas and heavy metal are reconfigured into dancefloor fodder. Post-club feeds off of shocking transitions. Its vision is dissonant, dystopian, and dissident, using a mix of high- and low-brow cultural signifiers in order to reclaim the club floor co-opted by mainstream electro-pop and EDM.

The disruptive element of the mix and its wide dynamic range, alternating between atmospheric breathers and high-BPM paroxysms, keeps listeners (and dancers) on their toes. Artists such as Arca and Chino Amobi used to attend the GHE20G0TH1K parties, as did Asmara (Nguzunguzu). Physical Therapy and Total Freedom were regulars in the booth.

What GHE20G0TH1K was doing touched a nerve in DIY electronic music culture across the globe, offering a new way of doing things that brought with it a sense of freedom and inclusivity, elements sorely missing from the industry. “It’s the pain and the pleasure of modern life under the thumb at the same time, and that’s why this music comes from people who have had those experiences with so much more eloquence and freshness,” says journalist Adam Harper in a Resident Advisor audio documentary.

By 2016, the party had morphed into a music and fashion label. Collectives and labels such as NAAFI in Mexico, Staycore in Stockholm, and No Shade in Berlin have expanded the sound to a global scale, while platforms such as Creamcake are connecting the dots between representation and activism with an interdisciplinary approach. The new club sound is a mainstay on London’s online radio NTS, and that channel’s “play everything” ethos has permeated the dance music spectrum, making sets more elastic and playful. Tracks by LSDXOXO, Air Max ’97, and Bearcat are being integrated into the sets of DJs like Eris Drew and Violet.

The radical stance of the movement still makes it hard to pin down, often being lumped into the larger “techno” category or labeled as “experimental.” While pop bootlegs and borderline techno tracks still represent the vast majority of productions, a new generation of female and non-binary artists, queer and trans, have been using the creative liberties of the music to push it to fascinating, raw, emotional ends. As Harper so beautifully puts it in the documentary referenced above, this is “people that are crying out for a new world making music that expresses beauty and terror.” Here are a few deconstructed/post-club releases we love.

From the crushing pain of heartbreak and loss to healing and freedom, the void created by love’s absence is an overarching theme on Odete’s Amarração. On this autobiographical release, she explores “feeling the broken heart of a rejected trans girl.” Hailing from Portugal, Odete is a multi-disciplinary artist, part of the local trans collective Çirca. Amarração is the ritual of binding through love in Portuguese and Brazilian culture, symbolism Odete uses to build a fantasy space for healing. Her sonic universe is fleshed out with aquatic sounds, from water samples to heavily distorted synths, and bound by translucent vocals. Odete uses her own voice, in a departure from the sample-heavy Matrafona, which results in a cutting sense of vulnerability. The otherworldly elements of her sound are most audible on single “First, It Takes Your Words,” where her pitched-up vocals, juxtaposed over looped bird cries and sword sounds, create an apocalyptic anime alter ego.

Themes like identity and vulnerability are also central to Ariel Zetina’s Organism. While vocals have always been a part of the Chicago producer’s work, this is the first time she plays with the sound of her own voice. Organism also finds Zetina, a playwright by trade, digging deep into her literary roots, incorporating her own texts alongside those by Brazilian artist Paula Nacif. The ocean is a presence here too, evoked through water imagery and atmospheric samples that Zetina folds over house beats and structures, evoking both the Floridian coastline where she grew up and her family’s Belizean home. Performance artist and producer Jesus Hilario-Reyes, aka MORENXXX, lends his talents on “Putamaria,” a ballroom-inspired track, where the hook is a looped sample of a group of catcallers.

Hailing from Sydney, Australia, Elizabeth Gale, aka ZEFGIRLCLUB, is one of the freshest voices on the global deconstructed scene. Her productions are dense and personal, graciously mixing infectious melodies and bubblegum vocals with world-shattering beats. Hers is a darker aesthetic, building a dystopian world where machine music, the Blade Runner soundtrack, and R&B are mixed to create the music of struggle and liberation. DELIVERANCE is brief but impactful, clocking in at under 15 minutes. Opener “Faith in Lies” sounds almost like a pop song, with Gale singing about a seduction that turns increasingly dark, gun and blade samples included. “Possession” is a catchy empowerment song, with a sharp shamizen sample that Gale playfully raps over, using tongue-in-cheek goth references like crimping her hair.

Frankfurt producer Johanna Odersky, aka Iku, divides her time between music and sculpture. Working with physical volume helps her give her music the heightened sense of space that it has; she playfully balances ambient elements with thumping club beats for a high-ceilinged sound. Body Horror, her second EP on Berlin label Creamcake, is a haunting exercise, exploring the material and the immaterial. Single “À Tes Yeux” beautifully captures this theme, creating a fascinating mesh of poetic French lyrics, hypnagogic piano progressions, alien insect sounds, and horror movie soundscapes.

LOFT
and departt from mono games

LOFT (pronounced ell-oh-eff-tea) is the alias of Aya Sinclair, a Manchester producer pushing U.K. dance music into unexpected territories. There is great humor in LOFT’s work, cleverly threading the line between terror and levity. “And Eats Itself And Eats Itself And Eats Itself” is a playful vogue break track with the “huh” vocal snippet looped over and over, bringing to mind a twisted take on the “Ha” ballroom subgenre. “That Hyde Trakk” reassembles hardcore into a cathartic shape-shifting cacophony of breaks, bass, and ambient that holds together despite its lack of traditional structure, making its energy feel almost magnetic.

If there was ever a release that captures Oakland collective CLUB CHAI’s sound and vision, it’s EUCALYPTUS, by label cofounder and producer 8ULENTINA. With Lara Sarkissian, aka FOOZOOL, the collective explores shared Middle Eastern heritage. EUCALYPTUS is fast and chaotic, combining breaks, Middle Eastern instruments, and hypnotic melodies with reckless abandon. This results in mesmerizing, slippery tracks that can still move a dancefloor. “Soiled” perfectly captures this elusive, hectic energy, with its spastic drums and addictive hook.