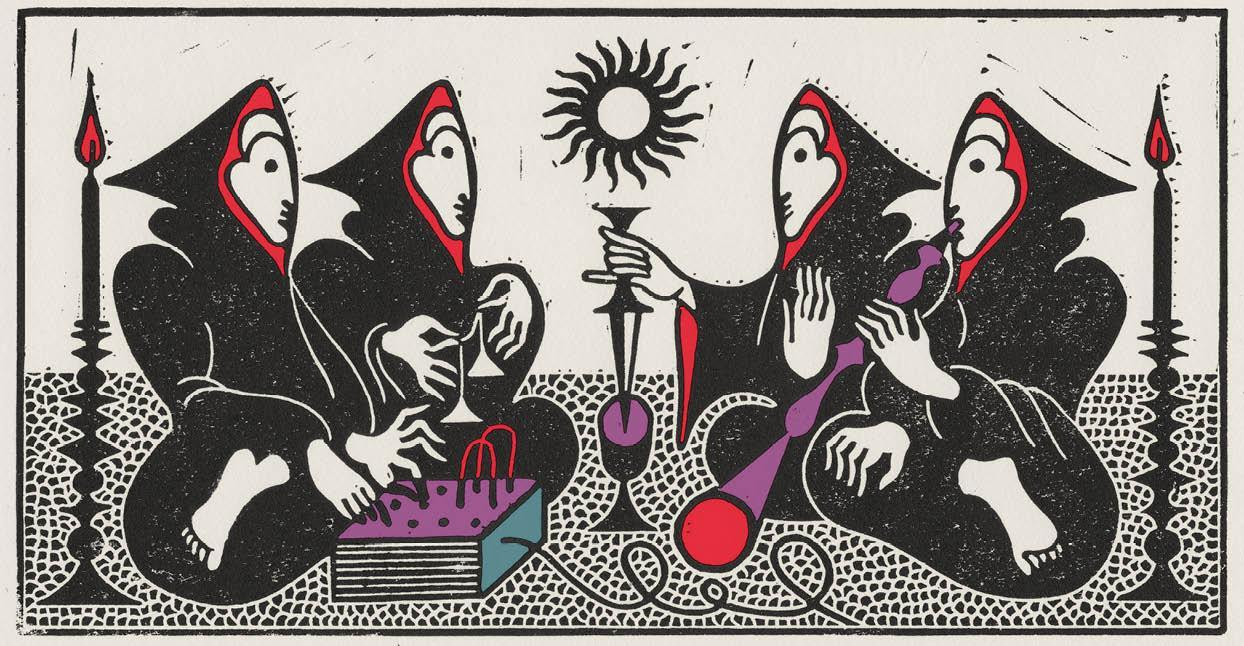 The notion of pairing music with ritual practices dates back centuries. In traditional societies, singing and music-making was often a communal affair, and it served a number of purposes—like communicating traditions, or strengthening community bonds. In other cases, music is used to achieve more mystical ends: Native American and ancient Greek societies believe that music can have healing properties, and Buddhist and Hindu cultures use chants and mantras to aid meditation.

That concept of “ritual music” continues to the present day, with many artists—particularly in the realms of dark ambient and drone—seeking new ways to combine their haunting sonics with spiritual energy. In the early ‘80s, bands like Psychic TV drew inspiration from paganism, Buddhism, and the writings of occultist Aleister Crowley; they even boasted their own affiliated magickal fellowship, Thee Temple ov Psychick Youth. Peter Christopherson’s Coil drew Buddhist temple music to radical queer ends. Their first record, 1984’s How To Destroy Angels—a bleak soundscape of ringing gongs and eerie drones—was subtitled “ritual music for the accumulation of male sexual energy.”

Where Psychic TV and Coil led, other early ‘80s groups like Lustmord, Nocturnal Emissions, and SPK followed, exploring aspects of shamanism, Satanism, and paganism as a route to enlightenment. Much modern dark ambient owes its sound to these early experiments. But as Rudolf Eb.er, Austrian sound artist, shaman, and devotee of Dzogchen explains, those spiritual pursuits can fulfill a deeper purpose. “Speaking as an artist, I’d say it is of profound importance to know how your mind and your creativity works,” he says, “for not just poking in insignificant bullshit.” In short, this is music—but it’s also something more.

Below, we shine a light on a number of contemporary and historical releases on Bandcamp that explore a post-industrial take on ritual music—from animist drone collectives letting the spirits speak through them, to cowled choirs, finding dark transcendence in the heart of ancient Buddhist chant.

Founded by Alexei Tegin in Moscow in the mid ‘90s, Phurpa draw on the ancient currents of Bön, a Tibetan faith both related to, but thought to be older than, Buddhism. Part band, part choir, Tegin and his collaborators stage murky recreations of ancestral Bön rituals, their guttural throat singing augmented by traditional instruments like dung chens horns and damaru drums. At times, it is fiercely minimal, just massed voices rumbling at an inhumanly low pitch. Experienced at length, though, Phurpa’s recordings attain an unmistakable power.

“Clubs are the new temples,” says Aïsha Devi. Born in Switzerland but with family roots in Nepal and India, Devi began her career under the name Kate Wax. But when she discovered meditation around 2010, she reverted to her birth name and began to pursue a new style of electronic music consciously inspired by her spiritual heritage. On Of Matter And Spirit, her debut LP under the Devi name, she emerges as a sort of contemporary shaman of the club, singing in a mix of English, Sanskrit, and “magic” vocalising, her soprano voice refracted through spiralling synths and deconstructed rhythms; “1%” is a rebuke to Western greed, “Aurat” tackles the way language is used as a tool of repression. But this is healing music, says Devi, its frequencies and rhythms forming a roadmap to enlightenment.

John Balance and Peter Christopherson’s long-running project Coil repeatedly drew inspiration from ritual music throughout their two-decade lifespan. But let’s focus on the group’s 1998 side-project, Time Machines, one of the most striking and unusual releases in their catalog. A series of numinous, vibrant drones plotted by Coil member Drew McDowall, the album drew on Tibetan sacred music and the effect of psychotropic drugs to create what Balance called “temporal slips”—moments in which the listener has the sensation of falling outside of time. “With Time Machines, we were careful not to reference existing ritual methods directly, but to find our own way to access those spaces via a trial and error,” says McDowall. “It was having an affinity and an appreciation for the way other cultures approached trance-inducing, ecstatic music, rather than incorporating that music directly.”

Much ritual music is rooted in ancient human traditions, but few delve back quite so far as Paelowolf. This mysterious solo project from Belgrade, Serbia sets out to imagine an age before written history, where humans were hunter-gatherers and gigantic beasts roamed the Earth. Whether this mix of shamanic chant and craggy dark ambience bears any relation to the music of early man is a moot point. But from the icy tundra chants of 2017’s Megafauna Rituals to the sweltering tropical drones of this year’s Primal Earth, the project certainly evokes an ancient atmosphere.

“We are vessels,” says Rob Fisk, spokesperson for the dark ambient ritual collective Common Eider, King Eider. Rooted in the philosophy of animism—the belief that plants, inanimate objects, and natural phenomena have a living soul—their recording sessions are literal rituals, making use of guitars, percussion, and more unusual items like soil, spit, and blood. Fisk describes the group’s music as a process of channelling: “Often times, we are instructed during ritual what to do regarding ritual. Often times, voices sing through us. We are just there for the energies to use as they see fit.” Common Eider, King Eider’s respect for nature also manifests in activism. The group advocate for environmental protection and indigenous land struggles, donating proceeds from their music to worthy causes, such as the Oceti Sakowin Camp at Standing Rock.

Matt Bower’s Skullflower project grew out of the power electronics scene, a misanthropic, frequently profane splinter of industrial music that developed in the U.K. in the early ‘80s. But Skullflower always remained something of an odd band out. For one, they preferred shrieking guitars to squalling electronics, with an approach that blended unmistakable malevolence with a sort of white-out transcendence. Later releases prove Bower’s vision has only intensified over time; see the so-called “temple musicks” of Tramo Drak, which blends scorching guitars with chime-like sounds and a sonic canvas that feels cosmic in its breadth.

By day, Brian Williams works in the movies, where the California-based Welshman has completed soundtracks and sound design for blockbuster films including Street Fighter and Mighty Morphin Power Rangers. By night, though, he is Lustmord, godfather of dark ambient and a seasoned collaborator with industrial names from Current 93 to Chris And Cosey. Williams’s music takes in cavernous, inky-black drones, haunting field recordings, and subliminal effects—this is ambient music, but with an unmistakably visceral presence. It’s at its best on The Word As Power, a so-called “exploration of ritual music without dogma,” that features a number of chants, mantras, and invocations.

Om Kult: Ritual Practice of Conscious Dying Vol. 1 finds Rudolf Eb.er exploring the Vajrayāna Buddhist practice of phowa, a form of meditation designed to transfer consciousness to a higher realm at the moment of death. “To shoot the psychic energy at the right time out the right hole, to explain it a bit sloppy,” says Eb.er. Recorded between 2016 and 2018, its unsettling ambience—a mix of piercing sine waves and cryptic field recordings—draws on sound sources including creeks and waterfalls, haystacks and dirt piles, and maggots and flies feeding on decomposing carcasses. For Eb.er, repulsion and transcendence are closely intertwined. “Disgust stands very at the beginning of serious research and work,” he says. “If you won’t expose yourself to disgust, you never expose yourself to anything completely, hence never experience something completely. In my own experience, I was exposed to such disgust that at one point something in my head switched and I suddenly saw all the overwhelming beauty at once.”