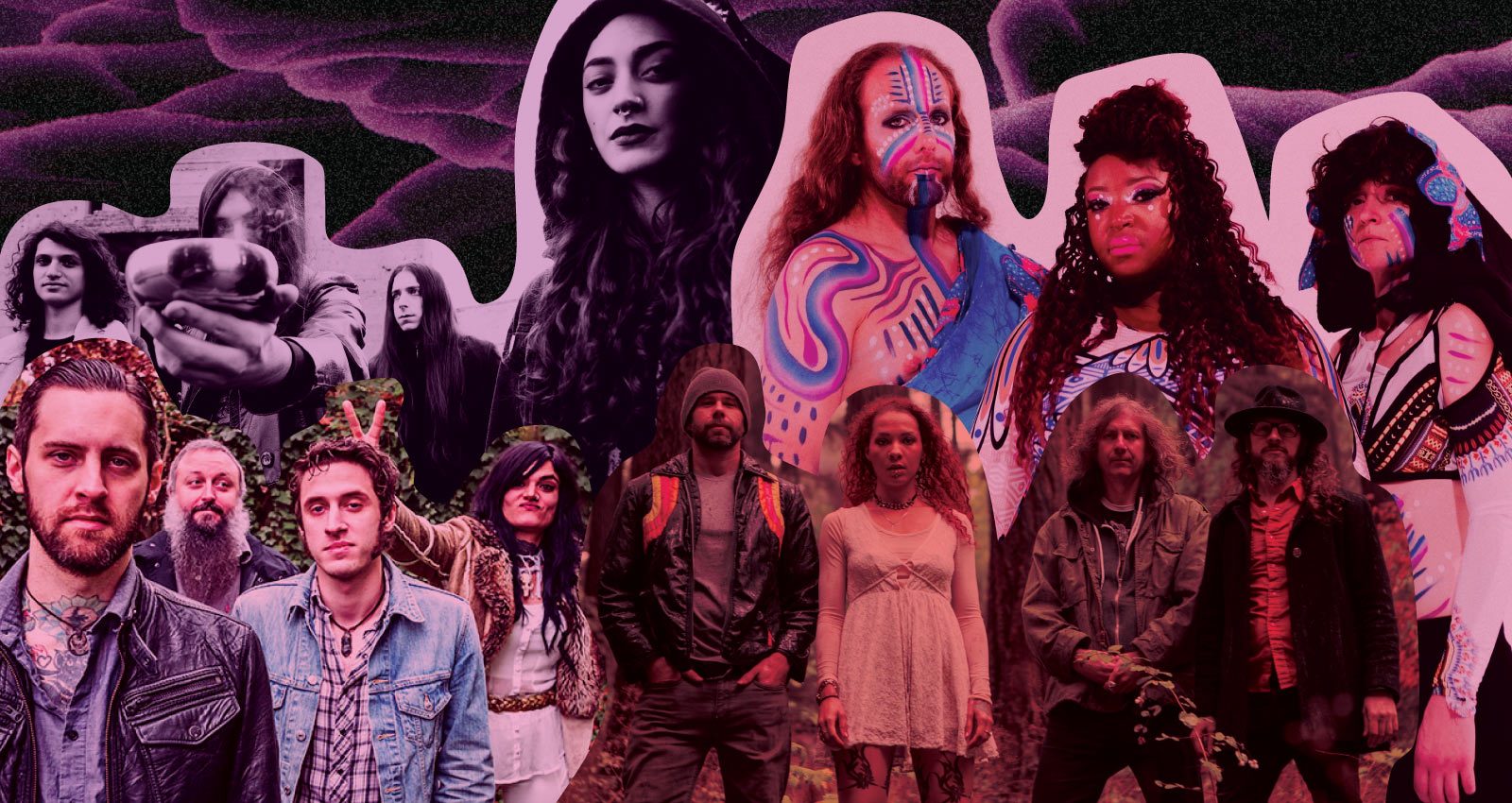 In today’s metal world, “clean singing” is often seen as an ornament, a quick respite mostly used to add contrast to the core growling, screaming, or shouting of a song. Yes, it’s hard not to love that metal has evolved to the point that there’s a specific, almost pejorative term for a vocal style that, in most other genres, is simply known as “singing.” But how many of us were lured into metal not just by its journeys into darkness, but the way those depths were illuminated by the operatic, powerhouse vocals of greats like Ronnie James Dio, Bruce Dickinson, and Rob Halford?

While there’s no shortage of trad-metal revivalists doing respectable emulations of those three (or power metallers doing their own, less heavy thing), a look through today’s most forward-thinking and innovative metal bands might leave you wondering: Has modern metal simply evolved past soaring vocal virtuosos? No! Like a rainbow in the dark, there is a newer generation of vocal virtuosos pushing the genre into the future, screaming for vengeance with incredible new voices of their own. Hallowed be thy names!

The London trio’s fusion of fuzzed out guitars, polyrhythmic drumming, and Aretha Franklin-adjacent powerhouse vocals is a powerful mix, and a little bit off-the-beaten-path for metal. Why haven’t millions of bands tried this approach before? Probably because singers as good as Chantal Brown (aka Oya) are hard to come by in any genre. On their debut album Possession, a drier vocal mix makes songs like “Mawu” memorably jarring, but the more varied palette of 2018’s Ascend makes it undeniable that Oya’s R&B influences are in truth a natural element of doom.

So too are the roots she invokes on songs like that album’s “Spirits Past” and “Started From,” which go beyond mere surface occult trappings to channel an ancestral history of anti-colonial rebellion and the West African Vodun religion.

As one of the vocal hallmarks of the much-maligned post-grunge sound, it’s probably hard for the baritone-voiced belters out there. It’s also probably hard when your band is as likely to drop a few bars of Yes-esque guitar twang as it is a pummeling sludge barrage—that is, unless you possess the charismatic vocal talents of John Carbone. Like the rest of Moon Tooth’s fleet-footed yet muscular prog metal sound, Carbone invokes a kaleidoscopic array of influences that in most other hands would sound all over the place, and condenses them into a fist pump. From leading the winding barrage of “Trust,” to crushing the metal balladry of “Through Ash,” Carbone’s exhortations make 2019’s Crux the perfect pump-up for workouts, mosh pits, and direct actions against police violence alike, especially on the anti-bigotry anthem “Musketeers,” which feature some of the best-sung “motherfucker”‘s you will ever hear.

As frontperson of the absurdly huge-sounding Belgian trio BRUTUS, Stefanie Mannaerts’s distinctly inflected voice sails across sweeping post-metal avalanches of guitar and mountainous bass rumble. (She’s also the drummer, providing the group’s driving hardcore beat.) Perhaps one way to tell the good clean singers from the great is on how well they can pull off their “YEAHS,” and on “Django,” the stomping second track of breakthrough sophomore album Nest, Mannaerts is in the finest form one can be. While her trademark is a classic rising and falling wail, she’s as flexible as the music demands, moving from almost new-wave harmonies to decimating shouts on “Techno.” Best of all might be “War,” which is a worthy addition to the world of metal multi-part epics despite sounding nothing like the group most famous for them, Iron Maiden. If you need more proof, just watch it performed live.

While they draw mostly from the classic heavy metal well, the sadly defunct Christian Mistress clearly put their own stamp on the sound. The expertly crafted riffs could have been pulled from some lost ‘70s masterpiece, but listen to how singer Christine Davis leads the band’s galloping charge, her every word cutting through with a gruff, world-weary edge. On barn-burners like “Open Road,” off the band’s 2015 album To Your Death, you can all but see Davis’s motorcycle blazing the trail ahead, while slower burns like “Ultimate Freedom” and the title track from 2013’s Possession, offer the kinds of dynamic showcases for her vocals such prowess requires.

The problem with saying that a metal band is “jazz-influenced” is that it could mean basically anything. Often, said influence manifests as “doing a lot of different things very quickly.” In the case of Messa’s self-described brand of “Scarlet Doom” though, don’t think cacophonous complexity but rather, noir atmosphere. The Italian group’s fuzzed-out doom riffs and NWOBHM-esque leads are given cavernous reverb. There are seriously splashy cymbals, and what is probably the most natural-sounding use of a Rhodes piano in metal history. Vocalist Sara (she doesn’t use a last name) is as adept at adding to the smoky atmosphere with dreamy crooning as she is letting loose operatic cries. Check out “Leah,” from their latest album Feast for Water, which transitions effortlessly between guitar-led doom and keyboard-led ballad, or “The Seer,” where Sara’s ascending vocal lines drag the band up through the depths of their own sonic haze.

When Cammie Gilbert took over as the singer of the prog-minded, Texan doom band Oceans of Slumber, it was hard not to be entranced from the first track she appeared on: the group’s epic take on the Candlemass classic “Solitude.” Where Johan Längqvist’s original vocals channel the immense experience of confronting the unstoppable force of nature, Gilbert’s voice is so massive that it sounds like the very ocean in the band’s name is waking up. And on the covers-focused Blue, closer “On The Turning Away” shows she’s equally compelling in a more intimate setting, guiding the band forward through the progressively heavier layers of the searching Pink Floyd power ballad until finally arriving at a lighters-up, multitracked choral finale.

Swiss-American musician Manuel Gagneux, has made waves with his Zeal and Ardor project, even outside the usual metal circles, for its fairly unprecedented combination of ”African American spirituals, blues, and black metal.” But sometimes lost in all the well-deserved hype is the acknowledgement that this experiment wouldn’t resonate nearly as much were it not for the fact that Gagneux can sing. If you’re here because you can’t listen to black metal rasps or howls for even a second be warned: he does those too—but his real forte are his rich, raging blues pipes. By turns chilling, as on his debut album’s title track “Devil Is Fine,” and explosive, as when furiously inciting rebellion on “Servants” off of follow-up Stranger Fruit, Gagneux’s extreme metal spirituals further the lineage of metal belters.

Witch Mountain is a Portland doom metal band with a very distinguishing feature: in the last decade, their obliterating blues riffs have been lit aflame by not just one, but two great metal voices. From the start, Uta Plotkin commanded the band through its Southern gothic shadow realm like an otherworldly traveler giving voice to all that haunts her (see: “Veil of the Forgotten”). But when she amicably left the band in 2014, no one could have predicted how quickly her successor would pick up the torch and run it right back to the peak.

With a more overtly theatrical style backed up by an incredible range, Kayla Dixon tears apart songs like “Midnight,” flexing and twisting and stretching each syllable. Alternately soaring, crushing, snarling, piercing, and otherwise depleting a writer’s reserves of synonyms for “extremely powerful singing,” Dixon uses her technical virtuosity to dig deep into the darkness, and shakes up some tectonic plates in the process.