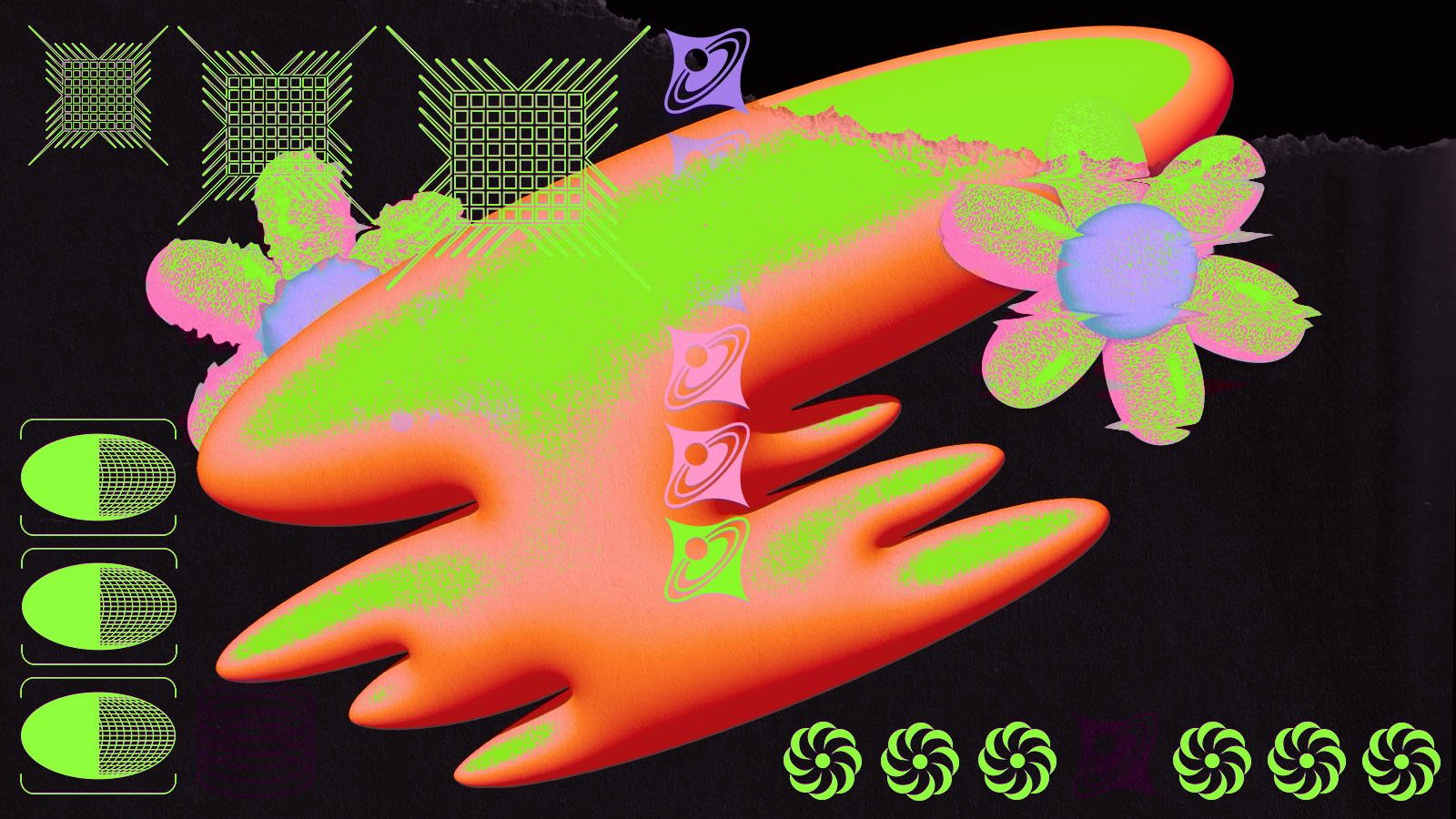 If the sound of nostalgia in the early 2010s was the chopped ‘n screwed muzak of vaporwave, its parallel in recent years might be what some are calling “breakcore.” Inspired by artists like Machine Girl and goreshit, a contingent of internet musicians have taken to speeding things up rather than slowing things down; the Amen break and anime and video game aesthetics are their tools of choice for whipping up Y2K sentimentality.

Use of breaks does not breakcore make, however. Some feel that the term has been diluted to the point of pure aesthetic; throw breaks over atmospheric synths, slap some Serial Experiments Lain fan art on the album cover, and boom, you have a “breakcore” banger. “The bending of the breakbeat, glitching it out or incorporating different sounds,” says Mike Hollis, aka x.nte. “It feels like this has been lost.” Much of the confusion revolves around breakcore’s nominal similarity to hardcore breaks, a subgenre whose musical lineage is related but parallel to breakcore’s. Machine Girl’s 2014 album WLFGRL straddled the two (along with footwork and jungle), and may have been the beginning of this elision of genres; by the time people were calling controversial producer Sewerslvt’s music breakcore, the term seemed to have swallowed anything atmospheric with fast-paced breakbeats into its scope.

According to a 2006 documentary, breakcore’s origins date back to the mid-’90s, the “bastard hate child” of an alphabet soup of genres including jungle, happy hardcore, ragga, grindcore, punk, and IDM. Venetian Snares popularized the sound in the mid-2000s, along with labels like Peace Off who pushed the sound in France. Emerging alongside digital hardcore with Alec Empire’s Atari Teenage Riot, breakcore was often explicitly anti-fascist and political in its ethos. Compared to the colorful Y2K aesthetics and cookie-cutter drum & bass that characterizes some of contemporary “breakcore,” this was a completely different genre. “Internet culture has captured the genre—making it less of a statement and more of a meme,” says Hollis.

“The internet culture thing isn’t a huge problem in itself but it does bring about toxicity,” he continues. Miya Lowe, whose genre-hopping music as evaboy dipped into breakcore, had to take a step back from the nascent scene as a result of that toxicity. “I have zero regrets leaving and distancing myself from it,” they say. “There was so much stressful and awful drama.” But as Andrew Whelan’s ethnographic work suggests, internet culture, along with its baggage of “edginess” and toxicity, was always bubbling at the corners of breakcore. Like the hardcore punk that came before it, breakcore’s existence at musical extremes has sometimes led to political and personal contradictions within its scene.

Nevertheless, there are breakcore artists who use the subcultural signs of anime and video games to push the style forward at both URL and IRL parties. Labels and collectives like Death by Sheep, Kitty on Fire, 909 Worldwide, Norm Corps, Landline Collective, Suck Puck Records—to name a few—have been at the forefront of this revival, often bringing together hardcore breaks and breakcore in a convergence of the subgenres’s parallel trajectories. Here’s some highlights.

Golden Boy
I Never Meant For This To Happen

Paris Alexander, aka Golden Boy, was a singular force in the breakcore revival. Artists and fans mourned her tragic passing last year; “I felt like she was de facto leader of a new generation of ravers across the U.S.,” said Machine Girl in a social media post. Her tracks connected newer fans to the potpourri sound of breakcore’s origins, sprinkling in bits of internet culture and video game references between gabber kicks and bent breaks. Founder of the Norm Corps label, she brought the breakcore revival from URL to IRL with 909 Worldwide at a secret show in Portland featuring Lil Kevo 303, 99jakes, Deejay Chainwallet, and other prominent producers.

Elevation and x.nte, both based in Atlanta, have been close collaborators and friends ever since the two linked up at a noise show that the latter was doing. Bonding over rounds of Tekken, they collaborated on Angel 993 for Never Normal Records, an Afrofuturist project that included a M.U.G.E.N.-based fighting game and tournament.

On their latest record, they bring a skittish, jazzy brand of breakcore to Death by Sheep. “I met Sweet (A&R of Death By Sheep) recently at the local Machine Girl show. We started talking about music and eventually this happened,” says Hollis. Singularity Fallout is a peek into the creativity bursting in Atlanta’s underground, with cover art from nohighs and contributions from NO EYES, among others.

A must-listen for those who spent their childhood days immersed in the muted cathode ray environments of ‘90s JRPGs and pixelated worlds of mid-aughts MMOs. 909 Worldwide affiliates Casper McFadden and MANAPOOL chew up old game soundtracks and spit them out with them out with breaks and kicks that occasionally push 200 BPM. “Another World” recontextualizes the seascape atmosphere of Chrono Cross’s “Dream Of The Shore Near Another World,” while “secret of the forest” reengineers Yasunori Mitsuda’s earlier work in Chrono Trigger for a 2300 AD rendition of 600 AD sounds. Completing a three-hit combo of nostalgia, “MissingYou” is a remix of the sylvan songs in MapleStory’s Ellinia dungeons.

A sampler of the breakcore revival in 23 tracks. Curated by Golden Boy before she passed, BREAK CORPS 2 outlines the shape of breakcore to come, featuring newer artists alongside veterans. With tracks like CDR’s mangled Think breaks in “VacuumPro x Breaks,” bye2’s machine gun kicks and Central Asian samples in “kötü tavşan,” and NANORAY’s 4×4 rave anthem “Bikkuri!,” this compilation demonstrates the range of the breakcore-to-hardcore-breaks continuum in the 2020s.

Landline Collective embodies the nostalgic side of the breakcore revival scene. Consisting of VAPORCHROME, Windowshopping, DJ KLAPTRAP, bye2, vertigoaway, NANORAY, s0cky, and purity://filter, Landline Collective deals in sounds that dip in and out of the breakcore spectrum: jungle, footwork, juke, hardcore, noise, ambient. As heard on VAPORCHROME’s “Ether,” the compilation’s opening track, they often use distortion and lo-fi stylings to emphasize a feeling of twisted nostalgia, like playing Mega Man Battle Network on a Game Boy Advance with its screen cracked and LCD fluid leaking around the fissures.

Joining forces with Landline last year, 5ubaruu juxtaposes aggressive break slicing with twinkly synth swells, creating a unique atmosphere that wavers between bliss and unease. This tension comes to the fore in final track “nihilism and sublimity,” which interrupts an ambient progression with head-smashing gabber kicks at 200 BPM.

Mexico-based label MAD BREAKS has been cataloguing some of the newer players in the breakcore revival, having released their first compilation in the middle of 2021. This compilation sees some fresh musical fusions, including Harmful Logic’s incorporation of funk carioca beatboxing and bassline in “C-C-Come On” and Sophiaaaahjkl;8901’s high-octane gabber and footwork-inflected mangling of K-pop in “1 JUST W4NN4 B YR D0G!!!”