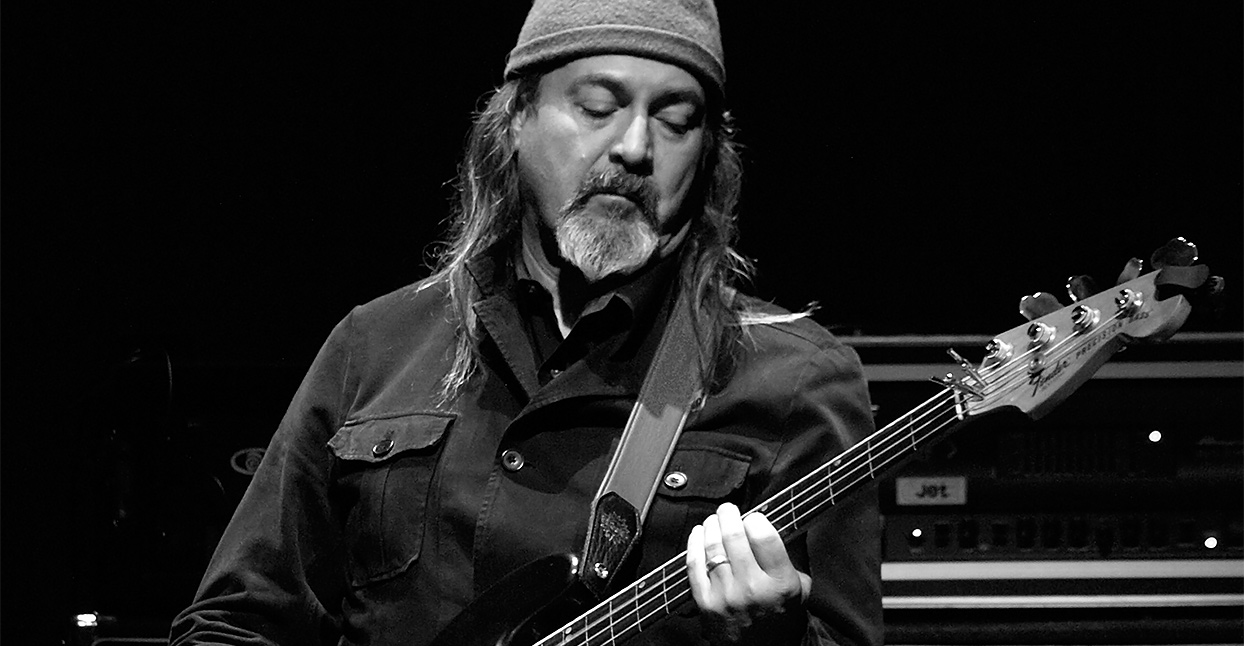 Bassist and producer Bill Laswell was pretty much a one-man industry in the 1980s and 1990s. He first came to prominence working on albums like Brian Eno’s On Land and Eno’s collaboration with David Byrne, My Life In The Bush Of Ghosts. Working with small labels like Celluloid and Enemy, he made crazily eclectic albums with his musical collective Material, pulling tricks like putting free jazz saxophonist Archie Shepp and a then-unsigned Whitney Houston together on a version of Soft Machine’s “Memories.” Beginning in the mid ‘80s, he came into his own, producing Herbie Hancock’s massive hit “Rockit,” Mick Jagger’s solo outing She’s the Boss, and PiL’s Album. He also worked with Motörhead, the Ramones, Iggy Pop, and White Zombie as the decade continued, while forming the fearsome noise/jazz/metal improv quartet Last Exit with saxophonist Peter Brötzmann, guitarist Sonny Sharrock, and drummer Ronald Shannon Jackson.

In the 1990s, Laswell’s cultural stock was at an all-time high, and he launched the Axiom label through Island Records. He put out albums by international artists (L. Shankar, Simon Shaheen, the Master Musicians of Jajouka), rock legends going in new directions (Ginger Baker), avant-garde jazz pioneers (Henry Threadgill, Sonny Sharrock), and his own projects Material and Praxis, not to mention compilations that explored his interests in dub, hip-hop, and whatever else crossed his radar. Laswell has always been an evangelist for what he calls “collision music,” combining players from a variety of backgrounds and traditions and seeing what emerges. With Axiom releases, you might get something hypnotic and breathtakingly beautiful, or you might get dub with tablas and some underpowered saxophone on top. At the same time, though, he was able to spend Island’s money traveling internationally to record traditional music with modern equipment.

The label went under in 1997 when Island founder Chris Blackwell resigned from the label’s parent company, Polygram. When Blackwell founded his next company, Palm Pictures, Axiom re-emerged, but the virtually unlimited budgets of the past were gone, and only a few Axiom/Palm releases ever appeared. But now, many of the label’s best and most fascinating releases are reappearing here on Bandcamp, via Laswell’s own page. Here are six great entry points to the Bill Laswell soundworld.

This 1989 collaboration between Laswell and company and William S. Burroughs was a beat-driven blend of North African music, hip-hop (samples of Eric B. & Rakim can be heard on the opening “Ineffect”), dub, and more. Burroughs reads text from his 1987 novel The Western Lands over the music, which includes contributions from Indian violinist Lakshminarayana Shankar, Palestinian-American oud and violin virtuoso Simon Shaheen, legendary reggae drummer Sly Dunbar, and Gambian singer Foday Musa Suso, among others. At times, Nicky Skopelitis’ guitar work heads into folk/blues realms resembling Bill Frisell’s dusty-road version of Americana, but adds storms of distortion. The Western Lands is a dark, death-haunted book; in its pages, Burroughs confronts his own mortality and that of the human race, contemplating Egyptian mythology about the afterlife, fears of a nuclear holocaust, and his own failings as a writer. Tracks where Burroughs isn’t present, like “Equation,” maintain the mood via cryptic vocal samples from other sources (and a Megadeth riff). The album, with its equally cryptic grooves, is an ideal accompaniment to the fragmentary, multifaceted meditations of its literary inspiration.

Henry Threadgill Too Much Sugar for a Dime

Originally released in 1992, this is a dense, complex, but exciting album by the Pulitzer Prize-winning composer and alto saxophonist. The arrangements favor electric guitars and upper-register basses that jangle, clang and scorch; clattering drums; and French horn and multiple tubas to hold down the low end. Threadgill’s saxophone solos are raucous but logical, jumping off from Ornette Coleman’s blues wails into a slightly harsher zone, but then retreating to let the band make it all pretty again. On a few tracks, violins and oud add mood and atmosphere, and on “In Touch,” two female singers repeatedly interrupt with haunted harmonies. The groove can be hard to pin down at first, but eventually this music crawls into your bones.

In 1991, Laswell produced guitarist Sonny Sharrock’s Ask the Ages, which featured free jazz legend Pharoah Sanders. Two years later, the producer and the saxophonist traveled to Morocco together, to collaborate with Gnawa musicians; the result was this blaring, hypnotic, explosive album. Gnawa music is built around intricate percussion patterns, a male vocal chorus, and the boom of the guimbri, a three-stringed rectangular lute that sounds like an upright bass being played by someone wearing boxing gloves. Sanders’ wall-shattering sound on the horn, balanced by his deeply spiritual approach to music-making, which had incorporated sounds from across the globe since the early 1970s, was a perfect match for the Moroccans’ fierce, hypnotic roar. At one point on “Hamdouchi,” a male vocalist begins a call-and-response with Sanders, roaring at him like a bear, only to be answered with a firewall of overblown saxophone. There are some tender moments, too, though; “Peace in Essaouaria” is a beautiful ballad dedicated to Sharrock, played almost unaccompanied save for some percussion so subtle it could be the wind, and—in the piece’s final minute—some dubbed-out guimbri.

This 1995 two-CD set is a P-Funk album by another name. It features George Clinton, Bootsy Collins, Bernie Worrell, Eddie Hazel, Michael Hampton, Garry Shider, Gary “Mudbone” Cooper, and Jerome “Bigfoot” Brailey, alongside Herbie Hancock, former James Brown collaborators Maceo Parker, Fred Wesley and Bobby Byrd, and Sly Stone, making one of his only appearances on record since the mid-’70s. Recorded at multiple sessions beginning as early as 1989 (“Tell the World,” featuring Stone on keyboards and some vocals, is a haunted, otherworldly ballad, his contributions seemingly captured without his knowledge), it’s got all the freaky fervor of Parliament’s and Funkadelic’s best 1970s work, with long guitar jams (these were Hazel’s final recordings before his death in 1992, and the 12-minute “Orbitron Attack” proves his power was undiminished), only seemingly nonsensical chants, crisp horn charts, and irresistible rhythmic drive.

Released in 1996, this compilation reveals Laswell’s continuing fascination with hip-hop, which began in the genre’s earliest days, when he worked with Afrika Bambaataa, Herbie Hancock, and Rammelzee. The 14 tracks here run a wide gamut—squiggly turntable wizardry courtesy of Q-Bert and the Invisibl Skratch Piklz (with whom Laswell’s funk-metal group Praxis would later record an astonishing live album), a typically moody DJ Krush piece, and remixes of tracks from the Axiom Funk disc, to an early appearance by Spectre, aka Skiz Fernando, who would soon launch his own WordSound label on the Axiom model. There’s also a piece featuring novelist, composer and vocalist Liu Sola, singing atop a backing track composed by Laswell and DJ Rob Swift that sounds like a RZA production, with its kung-fu samples and minimal scratching.