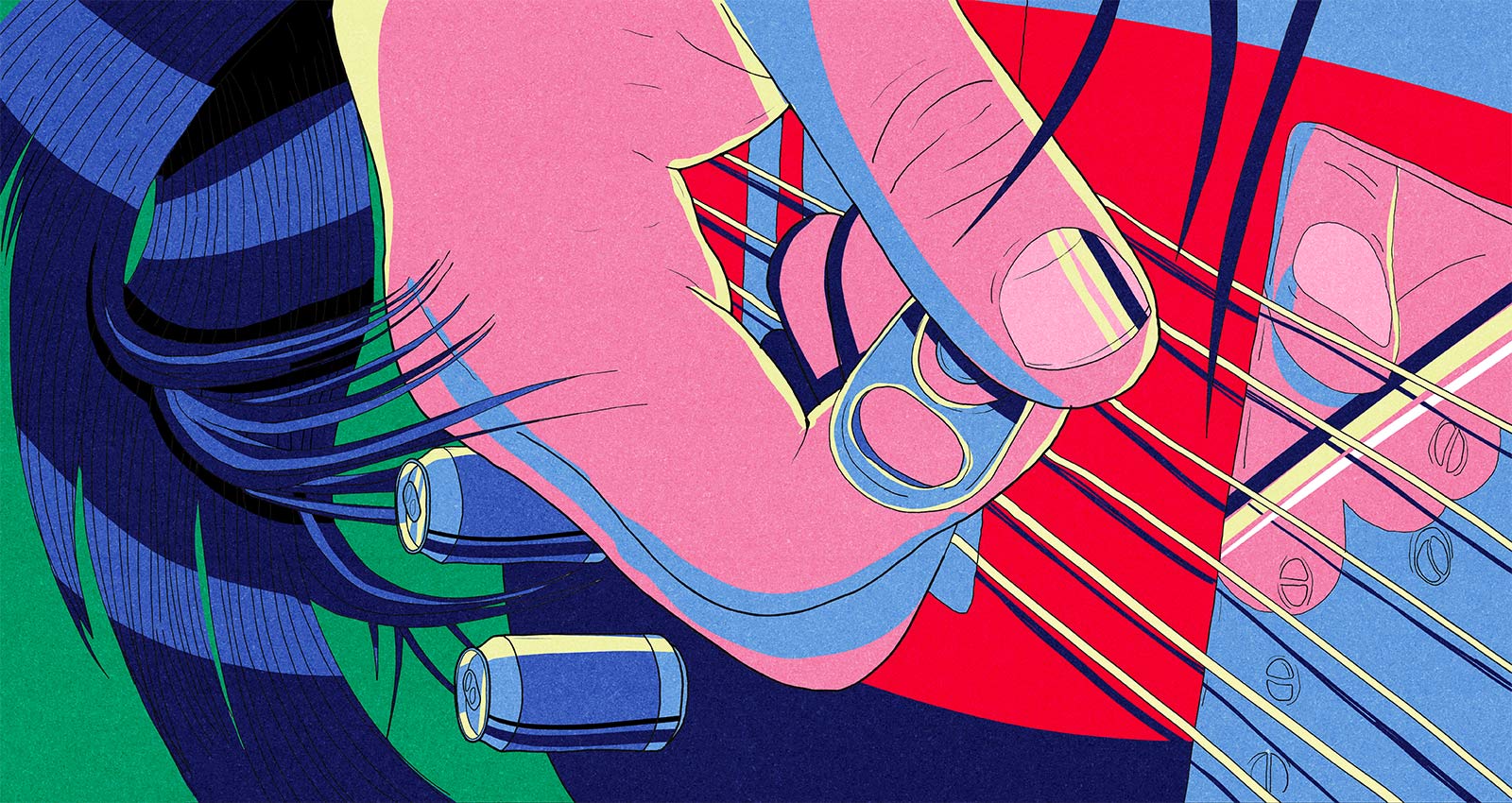 The spiritual bond between beer and heavy metal runs deep. Sure, there’s the most basic level: Drinking beer is fun, listening to metal is fun, and doing both at the same time is a lot of fun. Beyond that, the two subcultures share a real symbiosis. There’s a powerful sense of community among devotees of both. Both are fundamentally nerdy concerns, with hyper-informed fans who obsess over details that seem arcane to outsiders. Both place an emphasis on craft, on the hard-won perfection of a skill that only comes with time and practice, be it nailing a shredding solo or perfectly showcasing a punch of hops against a nuanced canvas of malt. Metal album covers and beer labels can both serve as a canvas for visuals that richen the experience. But yeah, ultimately: cranking metal while pounding beers is a blast.

This is not going to be a list of metal bands who have collaborated with breweries. That list has been done to death, and frankly, a list of metal bands who have not collaborated with breweries would almost be more interesting at this point. Instead, I’ve chosen bands with lyrics about beer from eight countries with great brewing traditions. Who represents their national beer scene the best? Crack a brew (or non-alcoholic beverage of your choice, we’re all friends here) and find out below.

The United States doesn’t boast the centuries-old brewing culture of many European countries. There was that whole Prohibition thing that reset the count of legal American breweries to zero back in 1920. But American brewers have been making up for lost time, especially in the last 40 years or so. The craft beer revolution that has swept the globe kicked off in earnest in California, home of influential breweries like Sierra Nevada and Anchor. California is also home to the old-school hardcore band Trappist, a beer-obsessed supergroup featuring current and former members of Spazz, Despise You, and Infest. Named for the only order of monks who fund their ministries by brewing beer, Trappist are singularly focused on their pet lyrical theme. Their debut full-length, Ancient Brewing Tactics, sounds like Discharge jamming with D.R.I. after splitting a 30-rack. Most of its 21 songs are shotgun-length, but its best (and, for our purposes, most instructive) track is a slow sipper. “Giving the Boot to Reinheitsgebot” clocks in at nearly four minutes, and it doesn’t waste a second as the band thoroughly rejects the archaic German purity law, equating the Bavarians who decreed that beer could only include water, hops, malt, and yeast with the literal Nazis. As anyone who follows a few American breweries on Instagram can attest, brewers on this side of the pond tend to agree. In their aggressiveness, their sense of humor, and their rejection of outdated brewing traditions, Trappist are pure American craft beer, through and through.

If you want to talk about British beer culture, you have to start in the pub. West Yorkshire’s Alehammer started in the pub, and by the sound of Barmageddon, they may have never left. The band’s crusty, groovy debut album sounds like what happens after closing time at the place where Grandad gets his Sunday roast. Needless to say, there won’t be mushy peas. In the UK, cask ale—or real ale—is the currency of the beer kingdom, and long-standing financial arrangements between real ale brewers and the places that serve it ensure that the enduring image of beer-drinking in England is friends gathered at a neighborhood pub. It stands to reason, then, that all of Alehammer’s songs take place within the walls of one of these essentially British watering holes. On the darkly funny “Last Orders,” the band are “tanked up on real ale and booze,” leaving no doubt where they’re doing their drinking. Barmageddon is a gas, but the hangover it leaves will be no joke.

Germany’s brewing tradition is one of the oldest in the world, but the Hamburg slam band Jaycephalic Doctority don’t seem especially interested in jolly abbots in brown frocks passing around stone jars of hefeweizen. The guttural assault of their brutal death metal has more in common with the modern brewing scene in Berlin, a scene that takes a lot of its cues from the American craft beer movement. C2H5OH would probably pair better with a hazy IPA from the nomadic brewers at Fuerst Wiacek than it would a Bavarian dunkel. The tongue-in-cheek song titles on the album refer to beer with the same faux-clinical tone Carcass used to apply to medical topics, but the most beer-inspired element of Jaycephalic Doctority’s music is unquestionably in the vocals. Not to put too fine a point on it—they sound like burps.

Finland’s most significant contribution to world brewing knowledge is the farmhouse ale called sahti. It’s a strong, dark beer with low carbonation, flavored with juniper and fermented with a strain of yeast that produces banana-like flavors. I don’t know if Korpiklaani were drinking sahti when they wrote “Happy Little Boozer,” but whatever they were drinking, they had a lot of it. The Finnish folk metal band represents all the joy, fun, reckless abandon, and stupidity of getting drunk, without any of its consequences. There is no sequel to “Happy Little Boozer,” where the title character has a sad little hangover, but that makes Korpiklaani’s music feel all the more festive, and drinking sahti when you have an American palate can produce a similar effect. Sahti is not a Christmas ale, and Korpiklaani isn’t a Christmas-themed band—but if you give yourself over to them, the warm feelings of yuletide just might come into focus.

If you’ve ever spent a night drinking beer in Sweden, you know that partying with Gehennah is going to get expensive. The Värmland quartet’s most recent album, the brilliantly titled Too Loud to Live, Too Drunk to Die, will make you feel immortal—at least until you check your bank account in the morning. Songs like “Low on Cash, High on Speed” and “All of the Decadence, None of the Success” acknowledge the high cost of getting loaded in beautiful Scandinavia, but when Gehennah implores the listener to “live life like a fuckin’ bulldozer,” it’s hard to care. They started as a Venom cover band before deciding to write their own songs, and their swaggering, rough-around-the-edges black ‘n’ roll betrays that early influence. And hey, if we’re going broke anyway, can I recommend the Stockholm brewery Omnipollo? At their bar in Södermalm, they’ll top off your glass with a little dollop of frozen soft-serve beer. It’s dumb but awesome, which makes it a great pairing for Gehennah’s music.

1000 Bombs hail from Pilsen, the birthplace of one of the world’s great beer styles. Their music certainly sounds like it was written under the influence of a few cold pints of Pilsner Urquell. “Don’t Trust the Aliens” is the only song on the thrashers’s lone full-length, Peace Is Dead, that directly mentions beer, but it’s a powerful narrative. Extraterrestrials invade Pilsen “not for oil, nor for petrol” but to steal their “prized life-hop fluid”: beer. By song’s end, it’s not known whether the Czech citizens have successfully warded off the alien threat, but it’s clear that their pilsner being imperiled united them in a way nothing else could have. Thrash in general feels like beer music, but 1000 Bombs’s defense of their hometown’s famous golden liquid is downright inspiring.

Brazil is the third-leading nation in beer consumption, trailing only China and the United States. Unfortunately for hobbyists, most of the beer sold there—an estimated 98% of market share—is bland, adjunct-brewed lager from a handful of interchangeable brands. The dudes in Anesthesia of Beer, a brew-themed thrash band from Rio de Janeiro, were most likely drinking the fizzy yellow stuff when they made the chaotic, punk-infused Altars of Drunkenness, but at least it sounds like they were having a ton of fun doing it. Sometimes it’s any port in a storm, and on a pristine Brazilian beach, are you really going to be asking the swim-up bartender if they have any imperial stouts? Grab a can of Skol, put on Anesthesia of Beer’s “Drunk Cyco Vision,” and rock out like it’s 1989.

Most serious beer lovers will tell you that the greatest brewing culture on earth resides in Belgium. It’s home to more Trappist breweries than any other nation, and its traditional lambic makers produce what many consider the world’s finest sour beers. Surprisingly few Belgian metal bands celebrate their homeland’s brewing tradition, but Ghent grind veterans Leng Tch’e do provide a sobering buzzkill with their song “Cirrhosis.” If one were to indulge in too much of Belgium’s greatest export over the course of many years, they could very well succumb to that terrible disease of the liver. If you’re not in the mood for that level of realness, here’s a bonus recommendation from Belgium—the lone album by ’80s speed metallers Breathless was just reissued by Dying Victims Productions sublabel, Relics from the Crypt, and it’s a backyard barbecue ripper that goes great with a responsible amount of Stella Artois.