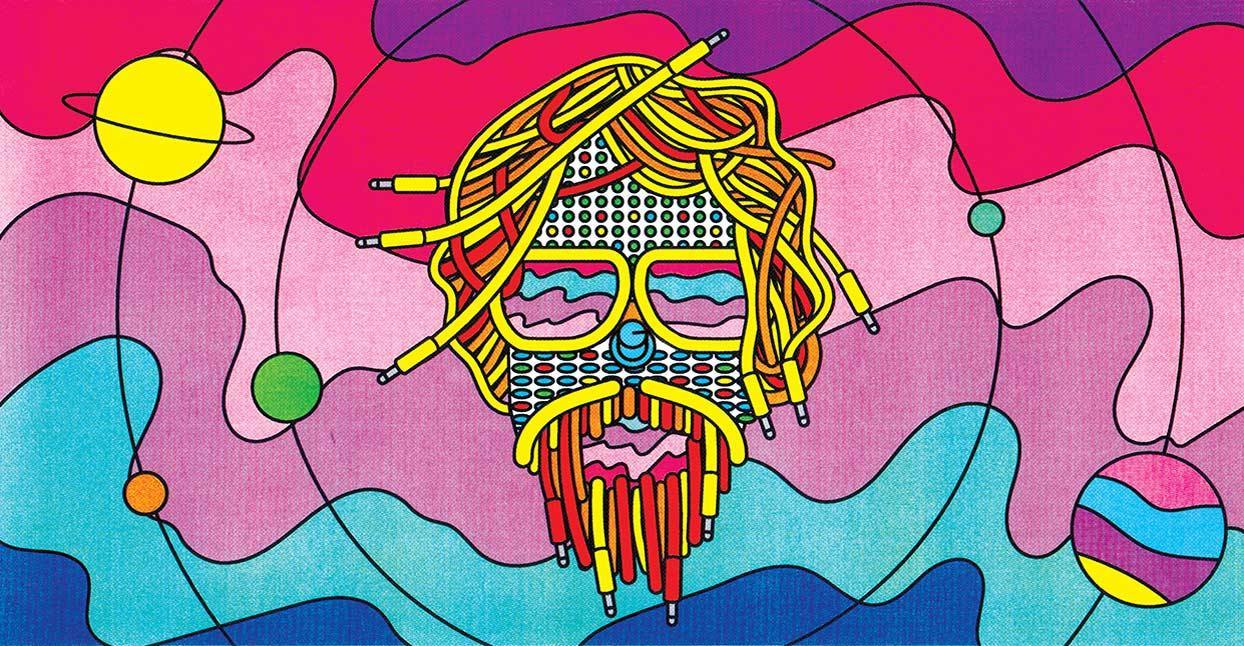 The history of modular synthesis is so long and tangled that it’s difficult to pinpoint any one creator. But any realistic history of the instrument must include Don Buchla. Buchla’s electronic instruments never achieved the market penetration of widely available models from Moog or Roland. Just take a look at the Buchla 100, the model he built on commission for the San Francisco Tape Music Center with a $500 grant from the Rockefeller Foundation in 1963. A hefty silver cabinet studded with cryptic dials, multi-colored sockets, touch-sensitive panels—and, shockingly, no keyboard—it resembled something you’d find on the deck of the Starship Enterprise rather than what you’d find on stage or in a recording studio.

To understand Buchla synths, you need to know about Don himself. A former NASA engineer and a peer of west coast hippie icons like The Grateful Dead and their sound tech Owsley “King of LSD” Stanley, Buchla was at the center of a burgeoning California counterculture dedicated to breaking down boundaries. Whereas the instruments that Robert Moog was simultaneously creating on the east coast were streamlined and user-friendly, made with commercial imperatives in mind, Buchla’s inventions were open-ended and unpredictable—bewildering to the amateur, but opened up a universe of possibilities to those willing to tune into its wavelength. “Anything is possible,” he told Keyboard magazine in 1982. “We’re not limited by technology, we’re not limited by the computer. We’re limited only by our mind-sets.”

Buchla never sold out. His equipment remained boutique rather than mass-market, and he was still designing and refining ideas up until his death in 2016. But the instruments he made—such as the Buchla Music Easel, a gorgeously designed performance synth launched in 1973—remain highly prized, having been discovered by a new generation of musicians including Kaitlyn Aurelia Smith, Alessandro Cortini, Kali Malone, and more.

The Berlin-based Italian composer Caterina Barbieri encountered a Buchla system while studying at the KMH in Stockholm in 2013. “I think that for me what was really special in the first place was the physicality of this instrument and the possibility to experience music through active and continuous gestural activity,” she says. “That machine taught me a way of listening to sound that years of classical training never revealed—a deep listening. A sort of microscopic perception of sound in its physicality, beyond its extrinsic cultural references. When it’s hard to guess the source behind a sound you are forced to engage with a more active listening, reliant on the intrinsic properties of sound as a physical object rather than the extrinsic properties of sound as a cultural object. And that’s something I am very interested in.”

Read on for some of the best Buchla-powered albums available on Bandcamp.

Hailed the “Delia Derbyshire of the Atari generation,” Ciani met Don Buchla while studying at Berkeley and, entranced by her early experiments with his instruments, began working directly with him, soldering circuit boards and taking on other tasks related to the instrument. Eventually, she acquired her own Buchla 200 system. Later, she funded herself through corporate work, using the Buchla to create jingles and effects for Coca-Cola and Merrill Lynch, and temporarily became the public face of the instrument—she even showcased it on The David Letterman Show. But Ciani was in it for the art, and her 1982 album Seven Waves—recently exhumed by Finders Keepers—is a masterclass in Buchla composition, its serene, pastel-shaded melodies and wave-crashes of white noise projecting a sense of deep inner calm. Ciani packed up her Buchla in the early ‘80s, carving out a respectable career as a New Age pianist, but in recent years she’s returned to the instrument, and Sunergy, her collaboration with Kaitlyn Aurelia Smith, confirms she remains one of the instrument’s most skilled practitioners.

If Suzanne Ciani could be said to have a spiritual successor, it might be Kaitlyn Aurelia Smith. Raised on the remote Orcas Island 100 miles north of Seattle, Smith trained in classical guitar and composition. But the lack of a local orchestra posed a problem for Smith—until her neighbor, a music professor, introduced her to his Buchla 100. “I would spend days upon days exploring one module and all of its capabilities,” explains Smith. “This process taught me enough about modulars to then approach it the way I would approach any other instrument.”

While the Buchla remains fundamental to Smith’s composition, there’s much more at work here. Take her breakthrough 2016 album EARS: a dense, colorful fantasia of sound and texture on which Smith winds a woodwind quartet and her own processed voice through the distinctive sounds of a Music Easel. “Modular in the beginning is like learning a new language, until it becomes familiar that you are able to express yourself through it, she explains. “To me the goal with composition is to express yourself, share your perspective, and more importantly to intend towards connection.”

Philippe Petit
Descent Into The Maelstrom

Perhaps it’s a hangover of the instrument’s hippy provenance, but the cliché of a Buchla musician is a dreamy, long-haired sort weaving an atmosphere of bucolic calm. Descent Into The Maelstrom offers no such reverie. Its maker Philippe Petit—a student of electroacoustic music at the CNRR Conservatory of Marseille—describes himself as a “musical travel agent.” Here, though, he’s going to the very edge of the map. On these three tracks, he uses the Buchla Music Easel as a portal into a churning soundworld characterized by swirling whirlwinds of electronics, jagged mountains of feedback, and a constant sense of dynamic action. Recorded in a single unbroken take, it demonstrates how well-suited the Buchla is to improvisation, even as it shucks off all formal musical structure in favor of a mood of fluid, fearful abstraction.

Dntel
Hate In My Heart

One half of Sub Pop emo-tronica duo The Postal Service, and the sole creative force behind Dntel, west coast producer Jimmy Tamborello has amassed a healthy, well-respected body of work. But around 2017, Tamborello found himself in a dark place, distressed by the fraught political climate and suffering from a case of writer’s block. The cure, it turned out, was a Buchla Music Easel, which he set up in his living room, hooked up to a delay and looping pedal. “I would try to sit down at it every day and just improvise for a while with a minimal setup… I’d usually do around 30 minutes, like a meditation,” he explains.

These sessions eventually spawned Hate In My Heart, a collection of instrumentals that explore a dreamy, meditative headspace spiked with occasional moments of bubbly turbulence. “I like the romance of a synthesizer built in a suitcase,” says Tamborello, effusive about the Music Easel’s myriad possibilities. “I can’t play piano at all, but with the Easel I can get into jams that sound like I know what I’m doing—especially the combination of the arpeggiator with the flat, touch-sensitive keyboard. You can just kind of slide your fingers around while it arpeggiates and it feels really musical. The keyboard is also pressure sensitive so when it’s patched right you can get really organic expression out of it with subtle changes in pressure.”

Born in Colorado but based in Stockholm, Kali Malone is one of a small community of affiliated young artists with ties to the Swedish capital’s state-funded sound laboratory EMS Elektronmusikstudion. Malone works in the field of drone, with a special focus on fusing modular synthesis and acoustic instrumentation. On Cast Of Mind, we find her seated at a Buchla 200, unfurling shimmering tones that mesh and intermingle with sounds played by a small cast of collaborators—Yoann Durant on alto sax, Mats Äleklint on trombone, Isak Hedtjärn on bass clarinet, and Gabriella Varga Karlsson on bassoon. It’s a simple idea, but in it Malone finds rich textures and moments of deep, rumbling resonance, creating a sound that feels solemn and considerate of space and silence, even as it doggedly refuses to sound any note of compromise.

Caterina Barbieri describes her first encounter with a Buchla 200 synthesizer at the Conservatory in Stockholm in terms of a personal revelation. “For the first time it felt like it wasn’t me playing the music, the music playing me,” she says. “Discovering how the activity of one module could invisibly determine the activity of the other was like discovering how different layers of our being are invisibly connected and integrated in complex way. Thinking back to those days, I can say that my experience with the Buchla was better than any psychotherapy!”

Lena Andersson is not the name of a composer but a collaboration—a meeting of minds between Berlin-based Japanese artist Kyoka and Irish producer Eomac that took place at Stockholm’s EMS. It began with the pair collaborating on the studio’s in-house Buchla system, producing a collection of source material that the pair would record and take for further work at Etopia studios in Zaragoza, Spain.

The resulting album, Söder Mälarstrand, features rather more sound sources than pure Buchla—Kyoka brings to the party a variety of neatly filleted field recordings, while Eomac contributes the sort of unsettling, askew machine rhythms familiar to fans of the Raster catalog. (One track, “Middle Of Everywhere,” even features a credited appearance by Mike Watt, although where punk’s bass hero appears within its cryptic, off-kiter swing is ripe for speculation.) Still, there’s a thickness of texture and vibrancy of sound here that seems to indicate those initial acts of synthesis were fundamental to Söder Mälarstrand’s design.

The Oregon composer Todd Barton won deserved acclaim for the recently reissued Music And Poetry Of The Kesh, an album he created in collaboration with the science fiction author Ursula K. Le Guin to accompany her 1985 novel Always Coming Home. For that album, Barton designed and created a number of invented instruments, working closely with Le Guin to create an entire musical language for the Kesh, an imaginary tribespeople inhabiting California’s Napa Valley in the distant future.

Music And Poetry Of The Kesh was quite the artistic feat, but Barton’s other musical endeavors merit shine, too. Multum in Parvo, released 2018 on Blue Tapes, collects a number of improvisations performed on the Buchla Music Easel and Epoch Hordijk Benjolin. Abstract, wild, but possessed of a benign spirit, its bubbling electronics have a distinctly organic feel, as if a microphone has been thrust deep into a rock pool to capture the activity of some hitherto unidentified microfauna.