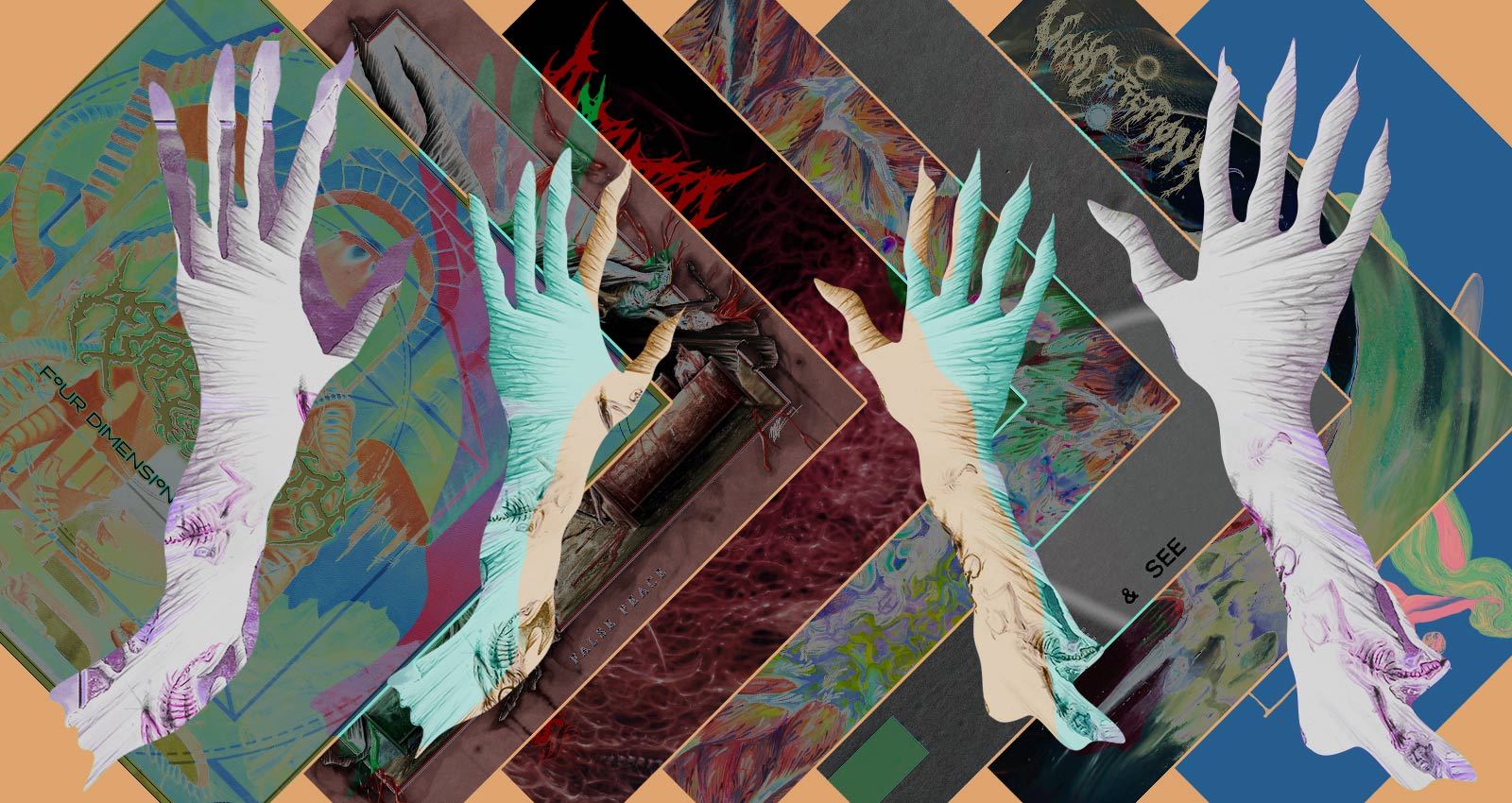 Can you believe death metal is almost 40 years old? For a musical style that often displays a willful, even perverse immaturity, that’s pretty amazing. But it’s true. The Bay Area band Possessed are often credited with inventing the style on their 1984 Death Metal demo tape (not to be confused with Mantas’ Death By Metal, which was also released in 1984 by a band who would later change their name to Death).

In the last 36 years, death metal has metastasized to encompass dozens of sub-subgenres and niche styles. The foundations—meaty, face-punching riffs, blasting drumbeats—remain pretty much mandatory; but beyond that, it’s anything goes. It can sound like four people who stole some instruments and wrote some riffs last week, or like the product of musos who’ve spent a decade practicing sweep picking in 11/8 time. And often, the weirder death metal gets, and the farther afield it wanders from its guttural, grimy origins, the more interesting it is. The seven albums below run the gamut from so-called “technical death metal” to stuff that’s, well, only technically death metal. Some of them feature traditional “Cookie Monster” vocals, while others are entirely instrumental; some will make you want to pump your fist and bang your head, while others will make you want to sleep with the lights on. But all of it will reinforce the idea that metal is far from monochromatic: in fact, it’s often bafflingly weird. And that rules.

Afterbirth were a relatively typical gore-and-blasphemy Long Island death metal act in the vein of Suffocation or Pyrexia when they first emerged in 1993. But they broke up quickly, and when they reunited in 2013, they’d gotten a lot weirder and more interesting. Four Dimensional Flesh is their second full-length, after 2017’s The Time Traveler’s Dilemma, and while it’s a death metal record to the core, there are a lot of subtle touches drawn from fusion, noise rock, and even Krallice-style black-metal-as-prog. Vocalist Will Smith (no, not that one) gurgles like a human plumbing emergency; drummer Keith Harris, briefly of Helmet, throws off-kilter rhythms at the listener, using tiny chiming sounds and unexpected tom rolls as punctuation. Two instrumental tracks, the two-minute “Girl In Landscape” and the 73-second “Minimum Safe Distance,” take things in surprising directions. The former brings in soft washes of synth and prog-rock dynamics, while the latter could almost be a late ’80s Sonic Youth track. “Never Ending Teeth” is almost sci-fi thrash, and David Case’s bass has a psychedelic, post punk quality on “Rooms To Nowhere.”

Portland, Oregon quartet Aseitas released their self-titled debut in 2018. Kevin Hufnagel of Gorguts and Dysrhythmia delivered a guest guitar solo on one track, which should provide a hint as to their particular brand of weirdness. Their follow-up, False Peace, is a head-spinning album that takes a death metal chassis and starts welding things onto it until it resembles an apocalyptic nightmare vehicle straight out of Mad Max: Fury Road. There are concussive electronic noise sections; Opeth-y growled vocals and soaring prog-fusion riffs; massive, crashing drums; impenetrable mathcore sections straight from the Dillinger Escape Plan/Coalesce/Cave In book; and an overall sense of unquenchable rage that’s more than a little welcome in summer 2020. But there’s a space and openness in their music, too. “Horse of Turin,” creates just enough breathing room in the form of clanging-but-clean guitar harmonies and drums with real room sound around them: a subtle cushion of air that makes the eventual impact feel twice as punishing. The 14-minute epic “Spite/Sermon,” clearly the album’s heart, reprises the same dirty tricks, but never feels like a slog or a death march; in fact, it’s glorious at times.

Believe it or not, Defeated Sanity started as a family band. In 1993, drummer Lille Gruber started DS with his father, Wolfgang Teske, on guitar and his brother Jonas Gruber on bass. Jonas only played on the band’s early demos and left in 1998; Teske stayed another decade but died in 2010. Members have come and gone since, with Lille Gruber the only constant. On this, the band’s sixth full-length, he’s pulling double duty on drums and guitar. Since he’s the primary songwriter, too, his only limitations are what he’s capable of playing, and that turns out to be a hell of a lot. The music here is so intricate, it’s almost chaotic; on “Conceived Through Savagery,” chugging, down-tuned riffs clash with flurrying kick-drums, off-kilter guitar structures, and sudden bursts of bass that add a jazz fusion feel to an otherwise-crushing metal assault. “Insecta Incendium” is even more esoteric, like Return To Forever with more distortion pedals and almost inhuman, pinpoint precision. Gruber’s blast beats always have a little air in them, though, allowing the listener to hear every strike.

You can come into a metal album with lots of different expectations, but a cover of Charlie Parker’s “Anthropology” is still going to come as a surprise. Mamaleek, a San Francisco-based, anonymous duo of brothers, pulled exactly that trick on their second album, 2009’s aptly titled Fever Dream. Come And See, possibly named after one of the most harrowing war movies of all time, is their seventh album and their first to be recorded with a full band. As a result, it veers sharply in the direction of “folks in a room, making a racket,” where previous releases were in “sound collage” territory. The aforementioned Charlie Parker tune aside, they’ve gone further into jazz and even blues than ever before on this record, which is partially inspired by Chicago’s infamous Cabrini-Green housing project. One of the brothers delivers the vocals in a horrifying howl, while the music clangs, lurches, and clatters along, somewhere between the swinging noise-rock of the Jesus Lizard and the big-band grotesqueries of Scraping Foetus Off The Wheel. The nine-minute “Cabrini-Green” moves through multiple movements, dragging the listener down one darkened hallway after another. Based on this evidence, these guys should be soundtracking the upcoming Candyman remake.

Pyrrhon’s brand of sophisticated, crushingly heavy death metal owes at least as much to the agonizing doom of Khanate as it does to other New York-area bands like Immolation or Suffocation. They don’t care whether you headbang or not; they want to make you suffer as you ponder the futility of existence, and the impossibility of an ethical life under capitalism. The vocals are an anguished howl; the riffs and drums roll out like boulders tumbling from the back of a truck into traffic; and periodic samples of movie dialogue hammer home the message that we’re all fucked, that in Bruce Springsteen’s words, we owe debts no honest man can pay. Sometimes the desperation grows so overpowering that actual songcraft falls entirely to the side, as on “Overwinding,” which features a rant from an enraged employee over seemingly random guitar and drum noise. The following song, “Human Capital,” combines pinched squeals of guitar with martial drum barrages, chugging riffs, and a hectoring vocal assault to deliver a merciless beating that’s equal parts Eyehategod, Unsane, and Morbid Angel.

Titan To Tachyons is a new power trio fronted by guitarist Sally Gates (formerly of Gigan and Orbweaver) with Matt Hollenberg, (a member of Cleric and several John Zorn projects), on bass and Kenny Grohowski—of Secret Chiefs 3, Imperial Triumphant, and also a member of the John Zorn company of players—on drums. The first track on Cactides, “Morphing Machineminds,” sets the tone for the whole thing: it’s a complex, multi-part instrumental that juxtaposes crunching King Crimson-esque stomp-riffs against melodies that recall Japanese improv-psych wizard Keiji Haino, but more melancholy. As the album progresses, tempo sometimes breaks down entirely as Gates and Hollenberg toss disjointed phrases back and forth as if hoping the other one will pick up an idea and run with it. Still, Grohowski’s massive drumming, which combines an improviser’s creativity with the discipline of classic hard rock and metal, keeps everything in line. One-third of the way through “Tycho Magnetic,” a hypnotically off-kilter riff emerges, underpinned by an almost Latin groove, but soon enough, Grohowski lays the hammer down with Bill Ward-ish power and swing.

VoidCeremony have existed for nearly seven years, but have only released EPs until now; ERC:DU is their first full-length. Along with Afterbirth, they’re the most conventional death metal act on this list, delivering skull-scraping guitar riffs atop relentless machine-gun drumming, with the hoarse, guttural vocals typical of the genre. Indeed, these guys are such traditionalists they’re practically trading in throwbacks, an impression that only grows stronger when the bass comes bouncing in. The album features fretless bass performances by guest Damon Good, who’s in a bunch of other bands, including Mournful Congregation. His work here blurs the line between metal and jazz-rock fusion, much as players like Steve DiGiorgio, Sean Malone, and Tony Choy did on early ’90s albums by Death, Atheist and Cynic, pioneering this style in the process. VoidCeremony take their music even farther out than those bands did, though. The nearly nine-minute “Empty, Grand Majesty (Cyclical Descent of Causality)” begins with two minutes of hyper-complex instrumental interplay, with continually shifting dual guitar riffs suspended atop a bubbling, bouncing fretless bass. Even when the vocals come in, the song holds tight to melodic and rhythmic tangents, delivering the perfect mix of escapism and immediacy.