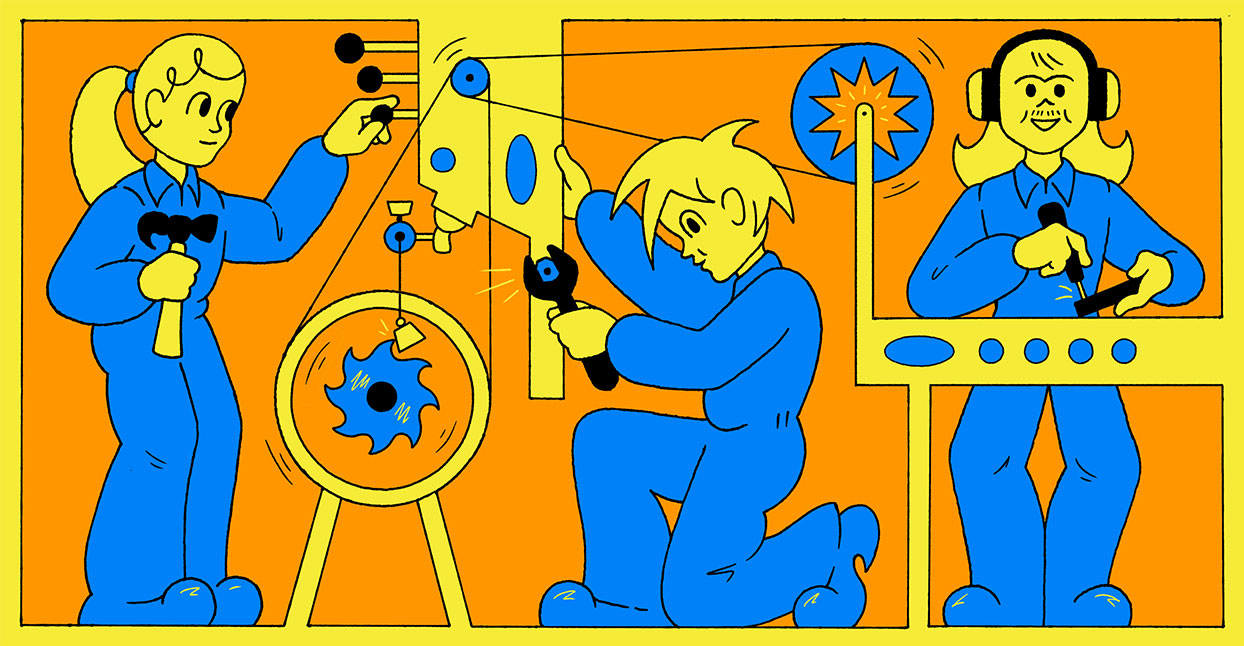 There are DIY artists—the kind who shun industry structures in favor of managing every aspect of their career themselves—and then there are artists who take DIY to the extreme. Not only do they home record and handle their own booking, they also build their own instruments from scratch. From an artistic perspective, that kind of independence can be liberating.

“If you start totally from scratch and really engage with every step of the process, you are bound to come up with something uniquely your own,” says Jason Sidney Sanford of the band Neptune. Sanford’s instruments are like functional sculpture, made from sheet metal, repurposed VCR cases, and metal chairs. “The drawback is that it takes a lot longer—there are no off-the-shelf solutions. The reward is that you come up with music that no one else could ever have made.”

Other artists prefer making music with found objects, or by circuit-bending discarded electronics. Those options are cheap—most garbage is free—and they’re environmentally friendly as well. “Electronic gear contains a lot of toxic, non-biodegradable, destructively extracted materials,” says John Hardin, the mastermind behind Electric Earth Music. “I love what electronics can do with sound, but because of their high environmental cost, I feel that electronic gear should be made to last a lifetime. The proliferation of disposable electronic toys bothers me. The idea of circuit-bending discarded toys into unique musical instruments appeals to me.”

But working with trash has drawbacks, too. “I’ve discovered that a large percentage of electronic toys that get donated to thrift stores have been urinated on,” Hardin says. “A Bratz brand toy drum machine that I circuit-bent had been urinated on, and that corroded the circuit-board. I cleaned it up as best I could, and got it to work for a while. Eventually, the pee killed it.”

The artists on this list do everything themselves. They create functional art, discover non-traditional sounds, keep an eye on the environment, and don’t seem to mind getting their hands dirty.

Jason Sidney Sanford started building instruments while studying sculpture at the University of Massachusetts, Amherst, in the early ‘90s. He was dissatisfied with the static nature of most sculpture and wanted to make something more interactive or useful. His first attempts were successful, and so he held a performance featuring his creations. “At first I thought it would be just a one-off,” he says. “But the musicians that I got together elicited a kind of lumbering, disjointed musicality from the instruments. One performance led quickly to more, and Neptune was born. Before long, we were making records and going on tour.”

Sanford’s instruments include somewhat conventional wire-frame guitars, electric thumb pianos, otherworldly oscillators, and unique inventions like a feedback organ, which generates feedback at various fixed pitches via a series of mics, foam tubes, and speakers. “I always strive to be in dialogue with my materials,” he says. “That means listening to what the materials want to do, and paying attention to mistakes. The instruments that I make are quirky and imperfect. But Neptune, as a compositional strategy, seeks out those quirks and employs them.”

King Pawns 2, by Hans Reichel and Kazuhisa Uchihashi, is an album of duets for guitar and daxophone. A daxophone is a small, resonant piece of wood that is mounted onto a box and amplified with a piezo pickup. It is played with a violin bow and a woodblock that is pressed onto the mounted wood to change its timbre and pitch. Its tones range from a deep, voice-like sound to high-pitched electronic-type bleeps and blorps. Reichel invented the daxophone years ago, although Uchihashi has been playing it for decades as well. “He first gave me a daxophone in 1996,” Uchihashi says (Reichel passed away in 2011). “It has a lot of possibilities for many different kinds of music. It can play melody, rhythm, noise, or whatever.”

Uchihashi invents his own instruments, too, including a resonant harp guitar—it looks like a type of electric autoharp—and he also plays prepared guitars, which are guitars modified in a manner similar to the way composer John Cage modified pianos. “I am an improviser,” he says. “I think making my own instrument is the most exciting part of being a musician. My idea is there, and the instrument should be updated as my idea is updated.”

La Resonante BasuBand is a Spanish collective of musicians and educators. They host regular workshops and encourage their students to build instruments from household items and trash. They make a variety of contraptions, although most of their projects are handmade versions of traditional instruments like pan flutes, thumb pianos, mini drum kits, and guitars.

Their goals are ecological—they encourage people to reframe the way they see waste—as well as social. They run programs in schools throughout the year, play festivals in the summer, and sometimes perform with student “orchestras” (as in 50-plus kids banging on boxes, shaking sand-filled water bottles, and blowing through plastic pipes). Universónica is a collection of accessible folk melodies performed on instruments made out of things like fruit boxes, copper tubes, PVC pipe, cans, and other found objects.

Electric Earth Music is an album of dance grooves built around a rhythmic, driving electric didgeridoo. Let that sink in for a minute. Those grooves are enhanced with an assortment of instruments made from found objects and recycled materials. The project is the brainchild of John Hardin, a musician and documentary filmmaker. Hardin went off-grid about 20 years ago, which was integral to the development of his approach. “I bought a couple of PV solar panels, a charge controller, battery, and inverter, and started making my music out of sunlight,” Hardin says. “This had a major impact on how I think about gear, because suddenly the amount of power a device required became an important factor in deciding what kind of gear to buy. Loud, tube-driven, guitar amplifiers, for example, were off the table.”

Hardin lives in the remote forests of Southern Humboldt County, California, and builds his instruments out of everything from the abandoned debris of former local marijuana growers—like cooking utensils, vehicles, and even buildings—to old electronic toys he fiddles with and circuit-bends. But the process isn’t without its frustrations.

“Sometimes, when things are not going well, I wonder why I spend so much time and effort trying to coax music out of garbage,” he says. “Other times, these instruments sing as though that is all they ever wanted to do. We live in a very noisy time in history, and in a world littered with an abundance of exotic materials with interesting acoustic properties. I feel that the music I make with these instruments is appropriate to our unique place in time, and that it reflects the discordant, unhinged, and apocalyptic qualities of a culture in collapse. What more can you ask of music?”

Sleeping Dogs Lie is the home recording project of indie rocker Eric Guenette. Most of his music is recorded using conventional instruments, with the exception of his 2008 release, Trieste, which started as an attempt to break out of a rut. “Trieste was born out of my frustration of recording with a drum machine,” Guenette says. “I wanted to make a more organic recording, but I am not a drummer, so I built a drum set from scratch out of five-gallon buckets, with garbage bags and a shower curtain as heads. I used bungee cords and a golf ball for the kick mallet and an old silver platter for a cymbal. I practiced on the kit for a few months, but realized that the sound of the kit would not be best with real instruments.”

Guenette’s solution was to write an album using only found objects and handmade instruments, like “guitars” that used twine, fishing line, and wire for strings, and bolts for tuners. “Nothing came from a legitimate musical instrument source,” he says. “The tones helped guide the writing and composing process, because tuning was sketchy and chords were damn near impossible to play. For example, going from one guitar to the next can evoke different moods and feels, which allow for a different writing experience. But making an instrument and composing on it really pushes that boundary. Creating music from an instrument of your own creation is quite a revelation.”

SMOGMA is a collaboration between Parker Weston (PKWST) and Vic Void. Their music is free improvisation, recorded live as it’s created, and their instrumentation includes prepared guitar, found objects, and handmade sound sculpture.

“It goes wrong more often than not,” Void says about the frustrations of working with functional sculpture and homemade instruments. “Sometimes I think, ‘All this looks better than it sounds.’ But it depends on the night—on the bits and pieces cooperating with one another—on the sound guy…” But for these Arizona musicians, the real benefit of working with homemade instruments is the community it fosters. “This sort of approach in music is rare, especially in Arizona,” Weston says. “It’s a desert in more ways than one. I feel blessed to be able to play the venues, galleries, and festivals around the state, and our tight circle of heads here encompasses more than a few varied projects. Whatever configuration you may see live here, it is all representative of our noisy family.”