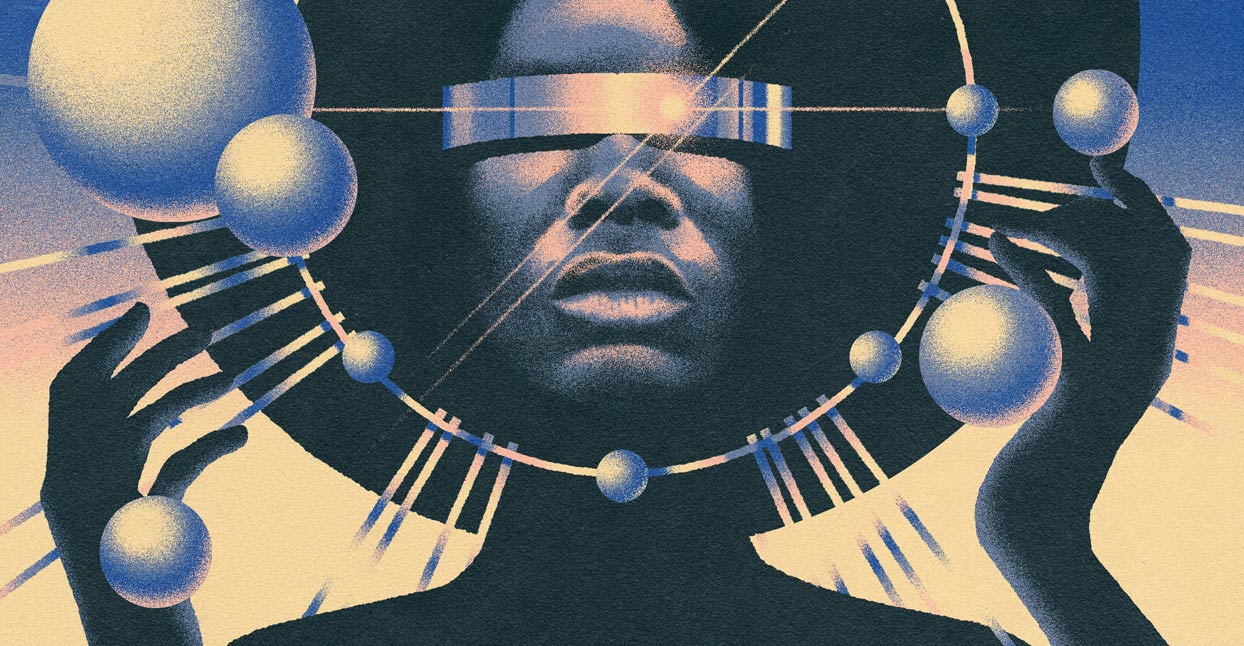 In the ’90s, R&B and hip-hop music videos by groups like Blaque, OutKast, and Missy Elliott burst out of the hive with the vibrancy of ritual, referencing everything from atmospheric independent African diaspora films, like Daughters of the Dust to Star Trek. These videos were high fantasy—but with the ubiquitous ‘90s video sheen of exaggerated colorwash and fisheye-lens effects.

Also during the ’90s, the term Afrofuturism was coined to discuss the rising interest in surreal, fantastical, and futuristic Black literature (from the likes of Samuel Delany, Octavia E. Butler, and Charles Saunders), and its connection to other forms of Black art (music and visual art in particular) that married science fiction tropes and ideas with Black radical politics, spirituality, and lived experiences. The idea then was to project idealized forms of Blackness into the future without eschewing any of the aesthetic markings that made Black existence in a post-colonial world unique. Artists imagined urban habitation adorned with updated ritual practice, the ghetto as space station geared out in chrome, and general narratives about space travel to coincide with the ecstasy of the music: the layered, heavy beats and hazy, jazz-inspired productions that were the norm of the time. This gave way to the explorations of Erykah Badu, Kendrick Lamar, and Janelle Monae.

The idea of Black music reaching into the pockets of the future is a real one. From Sun Ra to Alice Coltrane, from Funkadelic to Afrika Bambaataa, Black music has often appeared to be nonlinear, simultaneously calling upon the ancestors through ASR-10s, sound systems, and now even cell phones. This practice is a key aspect of Afrofuturism. While detractors or skeptics might call Afrofuturism simply “sci-fi with an ankh for the dash symbol,” it’s about more than just coating science fiction with the trappings of a Pan-African aesthetic, more than just Luke Skywalker in a dashiki. For Afrofuturists, particularly in music and the visual presentation of that music, it is the insistence that, because of consistent Black struggle against oppression, that the possible future is often more desirable than the well-known present.

Black Panther came out in February of 2018 and absolutely destroyed box office records, becoming the first comic book film to be nominated for an Academy Award for Best Picture—it’s since become a reference point for a pop culture vision of Afrofuturism. Certainly Black Panther‘s success has opened the world up to the possibility of Afrofuturism, of Black people being involved in creating alternative fantasies, projecting those fantasies into the real world through sustainable self-determination. Much like the film’s fictional African country Wakanda, there’s a sense that before Black Panther, Afrofuturism was a niche interest, shut off from the rest of the world outside of academia and literature and the underground, only to be revealed to mainstream pop culture in grand, fully-realized form. Well, that is only partly the case. It’s certainly true that Afrofuturists have always been visionaries, but the artists working with these themes today often dismiss trends that other musicians they’re grouped with are mired in. It’s a movement, not a monolith.

The argument persists: Is futurist Black music marginalized because the mainstream favors what it views as Black mundanity or negativity, or is it less acknowledged because the communities involved in making that music tend to revel in their rebel status? As always though, there’s often more than just what’s on the surface. Finding one’s community and finding one’s tribe is essentially a continuous journey, and the paths to liberation, like the ongoing civil rights movement that both inspires (and is inspiring to) Black art, music, and culture, are multifaceted, offering multiple answers to that argument. There isn’t an essential scene of musicians creating Afrofuturism as a genre; it’s a nebulous idea with its own trappings but not locked in a specific sound. Elements of Afrofuturism can be found in many movements, from the emergence of house music in the queer Black dance clubs of Chicago to the formation of the truly futurist vanguard sounds of Detroit techno. More important than fixing a genre or sound to the concept of Black futurity is the journey it takes to get there, the path that Afrofuturism helms towards liberation.

Here are seven steps to an Afrofuturist revolution in sound.

The epiphany is the initiation, the first step towards what we’ll call “Afrotopia.” This moment is where the creative takes a step outside of their comfort zone and experiments with shaking up the status quo. Divine Styler’s Spiral Walls Containing Autumns of Light is a wild, noisy hodgepodge of transcendent beats, punk rock edge, and ecstatic lyrical spellwork. Often heralded as the first noise-rap record—indeed, there is a ton of feedback on this recording—Spiral Walls represents Divine Styler’s not-so-subtle movement from the boom-bap hip-hop of previous outings into a stranger, more daring, future-forward headspace.

Moor Mother is a legend among noisemakers, with her Fetish Bones album gaining worldwide acclaim. Her hometown of Philadelphia already knew her genius well; on her early material, she crafted strange, witchy screeds tracing a nonlinear path of African ancestry to the present day. Finding the ancestral map, understanding a lineage that connects the past to all timelines, is essential post-epiphany praxis for any Afrofuturist.

Elucid’s Osage album is a blistering, 16-minute track that unfolds in 10 parts, wrapped in dark beats and chaotic glitches, the perfect soundtrack for a rebellion. Dedicated to Osage Avenue, a street in Philadelphia bombed by the police in 1984 in an attempt to rid the city of a group of Black radicals named MOVE, the Osage record is pure anger, channeling reality as lived apocalypse. Elucid laces lines like, “I was raised on thug poetry / Broke loops and coded roots” with vocal samples from MOVE members and ghostly, violent-sounding production RZA could be caught head-nodding to. Anger and outrage is an essential part of the Afrofuturist milieu, and Osage delivers it.

After the revolt comes dystopia—the uncertainty, the cracked neon lights, the fractured husks of armored cars that litter the ghetto landscape as a reminder of some catastrophe narrowly averted. Okanex’s Summons is the perfect record for navigating this possible future. These are lush, synth-drenched beats; stammering 808s and gated reverb ride over simmering melancholic chords like the ephemera of a cyberpunk dreamscape. An instrumental record, it’s the perfect soundtrack for night driving or battling rival gangs for control of the dirt.

Mourning [A] BLKStar
The Possible

When it is time to rebuild, Mourning [A] BLKStar, a Cleveland Afrofuturist R&B/jazz collective, will provide the hypnotic backbeat. This record soothes, conjures, and uplifts, crystallizing the past (the soulful gospel of “Wanders”) and pointing towards the future (the dirge-y crunch of “Shine Sails Again”).

Alien Cartoon is a frenetic, Afrobeat-laden celebration, a rare instance of Black boy joy unfiltered and uninhibited by hip-hop machismo, electronic music’s pseudo-intellectual posturing, or by normative patterns of rhythm. Initially designed to be the soundtrack for a bizarre fashion show, Ibaaku creates music for Miles Morales, the current Spider-Man, to swing to after the revolution. Moving from dense, drum-heavy tracks like “Yang Fogoye” to romantic, slow-plucked elegies like “Monkey Boy,” Alien Cartoon gives us a vision for what life will be like unfettered by struggle, never forgetting what got us there.

Wizard Apprentice, I Am Invisible

Ah, we made it, traveler! We have shed our corporeal bodies and have become one with the ether. Let’s listen to Somewhere to Decent to Live, by electronic dub musicians Space Afrika. A duo from the U.K., they have shied away from the Afrofuturist label in interviews, despite their name and despite tracks like “Gwabh” evoking the power of said name. The subtle tribal rhythms of West Africa weave a path underneath sparse, droning sounds that don’t so much as envelope the listener as they seem to constantly be opening doors and pathways to larger spaces. With Somewhere Decent to Live, we have finally transcended genre, we’ve shed material fiber, and we’ve come back into the whole. Proponents of Afrofuturism’s adherence to the movement’s roots in African traditions and nonlinear expression will say that we are back where we started, back where we’ve always been.