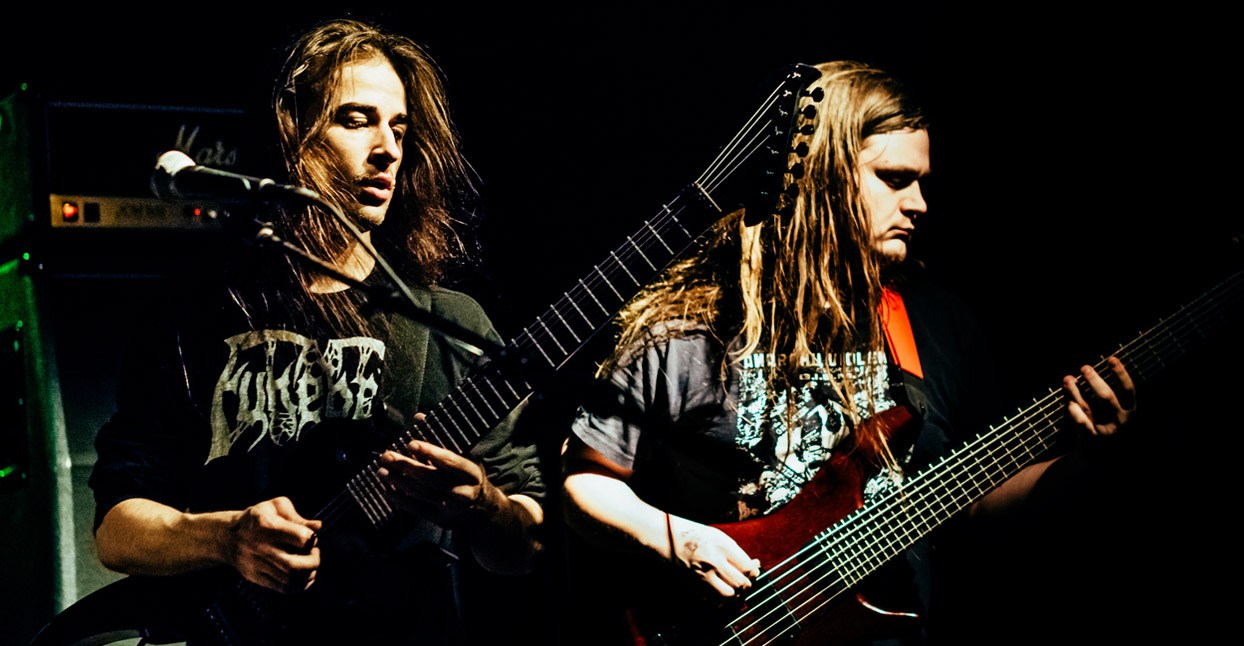 Believe it or not, the basics of music—like the way an instrument is tuned, or even what’s considered “in tune”—is not an exact science. It’s not even objective or universal. Systems vary from people to people, culture to culture, and have a tendency to change over time. In Western music, the current tuning system—at least according to some academics—dates back to 1917 with the publication of William Braid White’s Modern Piano Tuning and Allied Arts. The system became standardized around then, and Western artists came to rely more and more on a set of fixed pitches spaced at equidistant intervals, as on the keys on a piano. But even though a piano keyboard represents a rigid arrangement of fixed pitches, your ears can discern another 20 pitches or so between each key. And those notes—the ones that fall in the cracks—are called microtones.

Microtones are nothing new. The blues—and by extension every genre derived from the blues, which is just about every popular style—is steeped in microtonal inflections and embellishments. That’s why instruments like guitars and saxophones are so important—you can use them to bend notes and play pitches that don’t exist on a piano. Vocalists sing microtonal tones all the time, too.

However, in general, microtonal blues-based embellishments—usually called “blue notes”—are intuitive. Most artists play them by feel, and don’t use a system or formal notation. Most probably aren’t even aware that they use them.

But that’s changing. For the last 50 years or so, composers and performers have been exploring ways to play microtones on purpose. They are building new instruments, developing new systems of notation, writing new music, and now—even better—uploading them to Bandcamp.

The approaches are varied and diverse. Some, like EDM artist Sevish and the metal band Cryptic Ruse, use microtones to get weird. They explore new tonal relationships and tones that vibrate in unnatural ways. The results are jarring and uncomfortable, but that’s probably the point. There are acoustic artists like Fat Knuckle Freddy who use microtones to play pitches accurately—as they occur in nature—and to transcend the inherent limitations of fixed tuning systems. Others, like bands Consider the Source and King Gizzard & the Lizard Wizard, use microtones to incorporate non-Western scales and sounds into their music.

Microtonal theory is for serious music nerds—and some may find it challenging—but don’t let that deter you. Microtones deal with musical fundamentals that are not genre-specific; new tonalities can be found from say, stoner metal, as they can in EDM. Give microtonal music a listen—one of the artists featured here could be speaking your language.

Flying Microtonal Banana is the first album King Gizzard & the Lizard Wizard released in 2017—they released five albums last year—and, as the title implies, it explores microtonal scales and melodies. “I have a few unusual, especially Middle Eastern, instruments around,” King Gizzard frontman Stu MacKenzie told me last year. “In a lot of different musics not originating in Europe—even from piece to piece—the tonality can shift. Not in the sense that we’re used to, where it goes from major to minor or from one key signature to another, but the actual arrangements of the notes, where they’re placed or where the frets are, can change.”

In order to play microtones, MacKenzie convinced his bandmates to modify their instruments. They added additional frets to their guitars and basses, adjusted a keyboard, tweaked a harmonica, and created an album that sounds, well, different.

Start with “Rattlesnake,” the first track. Even if you’re not a musician, you can still hear that something is off. That “off” may just be your Western bias, but cultural prejudices notwithstanding, you are hearing notes most Western artists avoid (because to Western ears, they sound out of tune). Those are microtones. Microtones—as used here—create dissonance, tension, and give Flying Microtonal Banana its somewhat Middle Eastern twang.

Dywane Thomas Jr., otherwise known as MonoNeon, is a virtuoso bassist, guitarist, and lo-fi iconoclast. He is also one of the last musicians to work with Prince, who died in 2016. Thomas studied at the Berklee College of Music, where he met up with guitarist, composer, and microtonal advocate David Fiuczynski of Screaming Headless Torsos. Fiuczynski piqued his interest in microtones—Thomas calls himself a “microtonal dilettante”—and he often incorporates microtones into his funky, idiosyncratic music and recordings.

“D’s and P’s Microtonal” is a microtonal arrangement of Prince’s “Diamonds and Pearls.” Thomas plays a quarter-tone bass—the instrument has twice the number of frets as a standard bass—and that enables him to play one note in between every note on the fretboard. Not to get too geeky, but if each fret on a standard fretboard represents what music theoreticians call a “half step” (the smallest step between notes on, say, a piano), then Thomas’s bass is set up to play “quarter steps.” Listen carefully to how Thomas works quarter tone lines. He plays lengthy phrases that weave in and out and yet still sound like they’re within the space of just a few notes.

Sean Archibald, aka Sevish, creates electronic dance music, but programs his keyboards to various microtonal scales (which he calls xenharmonics, or xen for short). Archibald doesn’t use non-Western scales or tunings. Rather, he divides his octaves into equidistant parts (the standard division, otherwise known as the chromatic scale, is divided into 12 equal parts in what music theorists call “equal temperament”). His 2017 release, Harmony Hacker, uses 10-, 15-, and 22-EDO (equal divisions of the octave)—plus other tunings as well—which create angular and somewhat jarring melodies.

Archibald’s tunings are artificial—they don’t necessarily correspond to the way sounds vibrate in nature—but that’s their appeal. Instead of consonance or impeccable intonation, his songs feature sounds that vibrate against each other in unusual ways. It’s unnerving at first listen, but—similar to ultra-spicy hot peppers or extreme fitness—strangely addictive.

Check out “Moisturize The Situation” from their 2013 release, F​*​*​k It! We’ll Do It Live. Marin plays the opening riff and extended solo on a fretless guitar and—similar to the sound of King Gizzard’s Flying Microtonal Banana—hits notes not found in traditional Western scales. That gives Consider the Source’s music its subtle Middle Eastern lilt. Later in the song—and with the help of a guitar synth (and MIDI interface)—Marin also uses his fretless guitar to play a microtonal “trombone” solo.

Jen Shyu is a composer, vocalist, and multi-instrumentalist. She incorporates traditional Asian instruments like the Taiwanese moon lute, Korean gayageum, and Japanese biwa—along with traditional scales and tuning systems—into her compositions. Those influences are microtonal and give her music its distinct non-Western flavor. Song of Silver Geese is a complex work, expansive and almost dirge-like in places yet aggressive and confrontational in others. It is a showcase for Shyu’s vast timbral palette. Her ensemble also features Mat Maneri—son of microtonal composer and theorist Joe Maneri—on viola.

Multi-instrumentalist Killick Hinds plays what he calls “Appalachian trance metal,” but don’t expect “Dueling Banjos” or Slayer covers—Hinds’s music is out there. His approach is free and improvisational and he purposefully works to obliterate traditional forms, meter, and harmony. In that spirit, his many recordings—including the recent release, Beiger’s Build—also embrace microtones, which add rough edges and unusual textures to his music.

“On a guitar in standard tuning, the G-to-B strings are a nightmare because it is always out of tune,” Giusto explains, referring to equal temperament. “If you go from open E to G on the sixth string, most guitar players then bend that note up to the sweet spot. But it’s not the sweet spot, it’s the actual note. You’re just shooting for that pure minor third, because that’s what actually happens in nature.”

Technically, every tuning system is an approximation. The history of Western tuning is the attempt to tweak enough notes so that different keys sound in tune in relation to each other. None of the fixes are perfect, but for most people, they are close enough.

But for Giusto, as evidenced on Sweet Requiems on a Hot Summer Night—and with the help of a slide—he has his cake and eats it, too. “For example, if I am playing an open E chord and I slide to a B-flat, I will play that B-flat a little sharp,” he says, explaining how he tweaks tones on the fly. “I won’t be at the sixth fret, I will play a little past it. Or if I want the A-sharp, I play just behind the sixth fret, which is a little flat.”

Last Sacrament might be the heaviest microtonal band on Bandcamp. They use modified guitars that, similar to Cryptic Ruse, have additional frets spaced at equidistant intervals (16 per octave) and it’s those modifications that give their music its unique tuning and tonality. According to their website, Enantiodromia, released in 2013, is anti-diatonic, which, they claim, reverses the way your ear perceives things like major and minor. That might be a stretch, although it’s not a stretch to say that their unusual tunings make their music more abrasive—I mean that as a positive—and add an extra dimension of heavy.