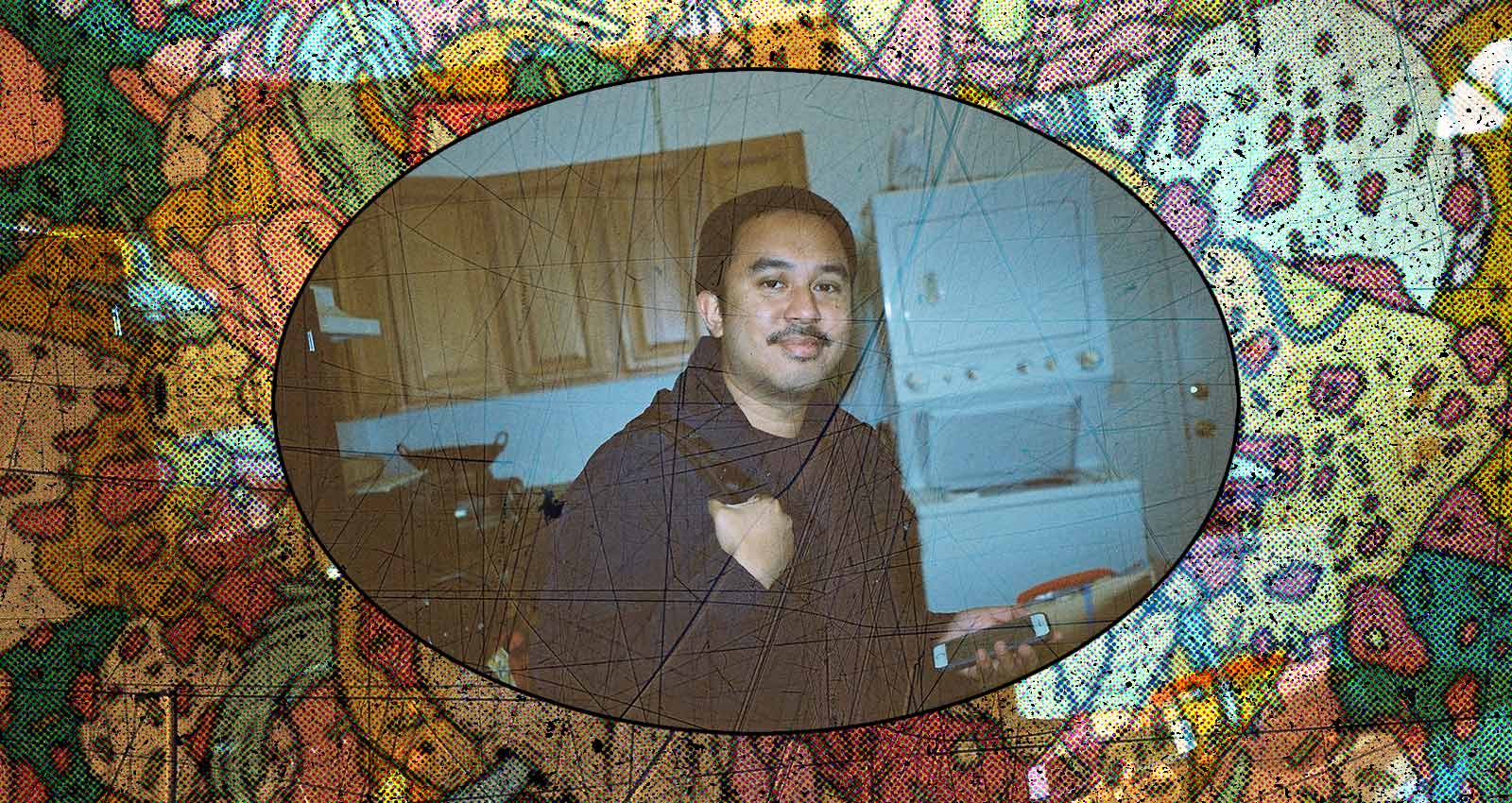 The producer 10.4 ROG has quietly amassed a robust discography of solo and collaborative work that draws on his love of adult contemporary R&B and ‘90s hip-hop. An hour-long conversation with the 35-year-old reveals deep appreciation for The Foreign Exchange, Da Beatminerz, and Herbie Hancock. These influences turn up in his beats, which center big electronic drums, buoyant synth chords and occasional samples, evoking the L.A. beat scene and nostalgic soul in equal measure. It’s the rare kind of music that fits everywhere, due to the broad sonic palate that ROG has spent years cultivating.

Born Roger Habon, Jr., 10.4 ROG started making mixtapes in the sixth grade, which he used to compile on a hand-me-down CD/cassette player combo that he got from his older brothers. “I would take my CD collection and dub it on to tape, then I would take skits from other CDs and begin to make my own skits,” he says. “Just by forming sentences from some of the spoken areas—like a pause tape process. Then I’d put songs in between, just for fun.” A year later, he downloaded a demo of the Fruity Loops music production software and began crafting his own beats. The audio samples and drum breaks came from the songs he pirated from Napster.

At his mother’s urging, ROG took piano lessons. “She was really insistent on me learning an instrument, and my brothers had a keyboard at home that I would mess around with,” he says. “I never really took it seriously.” His mother passed in 2008, when he was a senior in college. He moved back to his hometown of Renton, Washington once he graduated. “My brothers had moved out, so it was basically me and my dad in the house together,” ROG says. “I didn’t have too much going on, it was the recession, so it was impossible for me to find a job. I just stayed home and made a lot of music. I dedicated myself to learning the piano a bit better.” He also started meeting fellow musicians in the Seattle area. “Before coming down to California, a lot of my roots are back in Renton and Seattle, working with artists locally,” he says. “Eventually, I uploaded my stuff and connected with people on the internet, and it’s become what it is now.”

It’s common to hear ROG’s music praised alongside the likes of Swarvy, Kiefer, Suzi Analogue, and Linafornia. Here, he walks through his career and Bandcamp discography.

“I was still doing sample-based stuff, I was still working out of Fruity Loops. I was basically just working full-time and kind of keeping at it. And a lot of my goal in those years was to expand my range as a musician, to create arrangements that are still steeped in the sound of what you might call the beat scene. You’ll notice there’s a little postscript that says it was submitted for something called ‘see attached.’ My partner and I were part of this small group of creators, which was just doing things on the internet to invigorate some sort of creative process—no matter what we did.

“I think the group at the time was mostly Filipino-American creators just trying to get us to find some sort of unity. It became this little game of telephone, where someone would make something, and then others would react to that. The ultimate output was aggregated in a blog that we had. My offering was scrapped; it’s basically a bunch of beats that I made mostly over a July 4th weekend. Just really short loops and things like that. It was inspired by the big beat tapes at the time.”

“There was this huge gap between 2011 and 2015 [when this project was released]. I was working different jobs. I was a mover, I was in the back of a Goodwill, stocking books and shipping. A lot of that time, I was still listening to and making music and thinking about it—thinking about how to get better, thinking about how to get to a place where I can make records eventually. So that period was full of study. Even in that time, I think around early 2014, I had applied to and got into a graduate film school program in [San Francisco] State. My girlfriend had also applied for a job in Oakland, California, and we moved down together. In the middle of my first year of school, I was still making music and The Vibe Continuum kind of came out of that process.

“In terms of the length of the songs, it was like, ‘Alright, I really want to make something listenable, that someone could play and gather something from.’ So I was listening to a lot of music at the time, doing a lot of study, and doing a lot of practicing. I really don’t consider myself a strong playing musician. That record contains a bit of me challenging myself and doing switch-ups in an arrangement. I saw it as a personal challenge.”

“I was in film school, probably foregoing my studies sometimes and even opportunities to connect with my cohort because I was making so much music. So I had a lot of these little things that led to the beats from ::hoopdreams::. I decided to release this off the heels of that project. I struggled with putting it out, just standard self-doubt stuff. I hit up Bstfrnd for the cover art in the fall of 2017. He completed it not long after. I think I had all of the assets for it by early 2018. After ::hoopdreams:: had such a good reception, I was like, ‘OK, well maybe, hopefully people will like this.’ So off the strength of that, I decided to release these beats.”

“When I structured The Hand Drawn Rhythm Machine, I was thinking about it narratively. Some of those beats are from 2013—if you just look at the track list, like ’51st State,’ that was something that came out as a free track in 2015. I decided to make it part of this narrative for a cassette tape. It’s not a novel idea, but I wanted to make two sides that someone can listen to at their own discretion. I feel like it’s definitely less popular because of the commitment that it requires. But at the same time, I wanted to give listeners that experience of hearing it uninterrupted.”

“I was in L.A. working full-time and just trying to stay committed to a schedule of productivity, despite having to make ends meet and living my life. And so, with for a tension, I felt like I was carrying the sensibility of growing up in Washington state; it’s such a moody and dark record, and a lot of it had to do with what I was gravitating to at the time. I was really into things that didn’t take on chord changes as the basis. I was playing things where I personally couldn’t identify the chord while I was playing it, things that were sort of off of that traditional register. I was making noises that were more evocative of tense feelings. And so I had a collection of this music and I wanted to arrange and present it in a way that had beat tape sensibilities but was also a long-playing record. I still wanted it to be listenable, but I also recognize that it’s going to be an acquired taste because a lot of the stuff is very, very dark. My goal with that record was to write towards that title.

“A lot of my stuff is kind of punny or whatever—like treblemaker and for a tension are sister projects in that they play on words. A lot of it was addressing these personal conversations with myself about why I do music. I was asking myself, ‘Is this the reason why I do it? For attention?’ I have these ideas, and they’re probably self-manufactured, of being an older artist and whether my stuff is connecting with anybody. Or whether it’s out of touch because of my age. And so a lot of this was just an investigation of those questions about why I make music. I think for a tension, as it’s spelled for the record, allowed me to work through that.”

“I think a lot of the stuff was generated during quarantine, so I was just making music. I was investigating new processes, new ways of making music, messing with new software that I had bought right around quarantine, and dealing with the fact that I had lost both my jobs right when quarantine hit. I was thankful. I’m thankful to be living together with my partner because, otherwise, I wouldn’t be able to create. I would probably have to put everything on hold. And yeah, I was in a situation where, because I was working those jobs, I was able to get unemployment. While we were quarantined, I scrambled to do what I could to make steps towards being a full-fledged, working artist or producer, what have you.

“Chris Keys once tweeted something like, ‘We got to give love to treble in music.’ And both he and I have these conversations about lo-fi music and the problems that we have with it. There are a lot of really important producers doing great work who get overlooked, or they’re not making the living that some of these lo-fi artists get. So a lot of this has to do with championing treble or hi-fi as opposed to lo-fi. I wanted to make a beat tape that sort of showcased my appreciation for high-end music. My straight-up aesthetic goal was to make the kind of beats that featured high-end in different flavors. And that’s probably the reason why I made it so short. I didn’t want that experience to be too long for folks because it can be fatiguing.”

Jumbo Street (as one-half of Figmore)

“JUICEB☮X was a friend who I met through another friend, a guy named Wes Wax who had recently moved out here and was doing music. Wes and I were making music together for months, when he told me that his best friend had moved out to California as well. And so, one night he arranged for us all to get together. That’s probably the first time I met Juice and he was playing me some records. Towards the end of the night, Juice was showing me stuff that he was doing on his own. He showed me a record that he was singing on and I really gravitated to a lot of that stuff. Juice and I wanted to do an album in the context of hip-hop but also in our own way, in our own voice and within our abilities.”