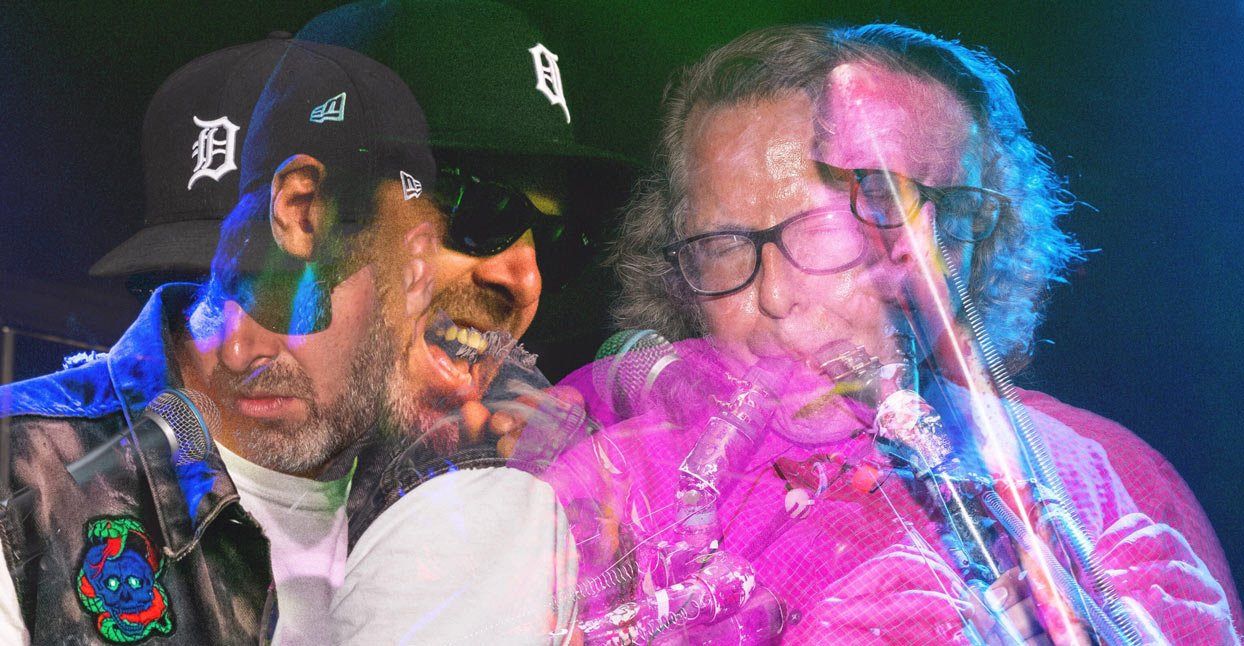 “A song becoming definitive when an artist decides to hit record isn’t really the case, man,” says Nate Young, founder of noise project Wolf Eyes. “It’s never the definitive version, especially with the kind of music we’re dealing with.” For 23 years, that’s been a guiding principle in Wolf Eyes since it began with Young splicing a found tape loop from an answering machine with Paul Winters’s new age/smooth jazz release Wolf Eyes. He gave one copy to friend, and soon-to-be bandmate, Aaron Dilloway, called it “Wolf Eyes,” and almost immediately began amassing what is now one of underground music’s deepest catalogs.

Young met Dilloway after a Galen show—he had been blown away and wanted to meet the guitarist and vocalist. Galen was an anxious mixture of rock, no wave, and noise, with records on Dilloway’s own Hanson Records. For Young, Dilloway became a constant stream of underground music—“weird shit, punk, electronic music,” he recalls. Young never had much of an archival impulse or a serious record collection, unlike Dilloway or long-term bandmate John Olson, who linked up with Young and Dilloway around 2000.

Over the phone with Young and Olson, Young recalls the moment the latter became a full time member of Wolf Eyes. “We were playing with Hot Hot Heat, who asked Wolf Eyes to play. Dilloway and I show up, and the stage is just littered with sheet metal and spray-painted trash. We’re like ‘Where’s John? His shit’s everywhere.’ So we tell John that we—Dilloway and I as Wolf Eyes—are going to do fifteen minutes, and we want him to come in after.

“So fifteen minutes in,” he continues, “John starts throwing sheet metal around the stage, and this piece of aluminum siding gets thrown at me, cuts my jeans and slices my leg open. I was bleeding pretty bad. We end the set, and I notice there’s a lot more blood around the stage and John’s nowhere to be found.” He turns to Olson. “I guess you got cut up pretty bad?”

“I had so many bad cuts everywhere,” replies Olson, “and had to be driven home. If we hang out in person, I could still show you the scars. I passed out from the blood loss.”

Young laughs. “So, Dilloway and I just looked at each other like…‘I guess he’s in the band.’”

Since then, the Wolf Eyes roster has changed every handful of years. After Dilloway split from the group for Nepal in 2005, Mike Connelly of Hair Police and Clay Rendering played in Wolf Eyes from then until 2012, James Baljo (A.K.A. Crazy Jim) from 2013 to 2017. These days, Mark Morgan of Sightings is sitting in on guitar.

The Wolf Eyes saga is rollicking, inspiring, relentless and hilarious. In their more than 20 years of existence, they’ve put out hundreds of releases (CD-Rs, tapes, mini-discs, lathes, LPs, and beyond)—thousands, if you include solo releases and associated acts. There were periods when the band would tour, wake up, dub the previous night’s performance on tapes, then each band member would record a solo tape, dub them, make artwork, then head to the next gig. “It’s not important to own [the complete discography],” Young says. “It allows each listener to have their own interpretation of the band.”

Even though Wolf Eyes is one of the U.S.’s quintessential underground noise groups, they managed to put out releases on labels like Sub Pop and Third Man Records, reaching visibility that few acts performing fairly impenetrable music can admit. Records like Burned Mind and I Am A Problem: Mind In Pieces, records that gained significant attention, are also clearly still Wolf Eyes. But to know Wolf Eyes is to engage with the ephemeral. This list seeks to show important moments in the band’s history as well as its more obscure corners. Thanks to the archival efforts of folks like Dilloway, Henry Bent, and Forest Juziuk, much of Wolf Eyes’ catalog has been digitized and uploaded to Bandcamp.

Early Vol. 1 is a Hanson Records reissue of the first solo Wolf Eyes tape Young made. The a-side features the original tape loop collage with Paul Winters’s Wolf Eyes playing behind it. The b-side is Aaron Dilloway remixing it, “running the recording through reverbs and tape delays,” Dilloway says, “and adding some plucking of some old wire.”

Less of a deep cut than an essential stop-over, Dread is an early Wolf Eyes LP, which was reissued in 2018 on their Lower Floor imprint, and it was recorded out of an amplifier. “Nate had this Roland stereo keyboard amp,” says Dilloway, “So we were all going into that and out into a mini-disc player. We just did a couple takes of each song, trying to get the mix right, and that’s how we recorded that. I think ‘Burn Your House Down’ is kind of a dubbed-out mix that Olson did—it’s got some added delay on it. Somewhere I have a lathe cut we did of the [original]. Olson did a couple different dub mixes of the recordings, and the only one that ended up on the recording was ‘Burn Your House Down.’” The CD version of Dread also included Sandpapered Eyes, which Olson and Young call the most extreme noise in the Wolf Eyes catalog.

“Snake Transmitters is one I really like,” says Dilloway. “It was on the radio in Davis, California, and it’s got the Wolf-Etts doing back up vocals. They do back up howls. That was live on the air. That was a really fun one.” On this recording, Chiara Giovando and Rose Meyers provide backup vocals to Wolf Eyes. “We had played this Mexican restaurant earlier that day,” says Olson, detailing the intense West Coast tour on which Snake Transmitters was recorded—“We were playing two shows a day.” On this tour, Wolf Eyes also got to meet legendary Californian noise outfit Smegma. (Young talks about attending a Smegma gig where everyone was completely naked. “Yeah, man, this is a Smegma gig,” was the response he got when he asked why.)

Olson says that if Sandpapered Eyes is the most extreme noise in the Wolf Eyes Catalog, Mugger comes second. The artwork for Mugger was appropriated from a NWOBHM band called Shock Treatment, who had a 7” called Mugger. Dilloway took that artwork, slapped a “Wolf Eyes” above it, and the rest is history. Comprised of five nauseating gut punches of noise with throbbing low end, Mugger was sourced from Wolf Eyes recording sessions and then arranged by Dilloway, ending up being one of the last Wolf Eyes arrangements he made before parting ways.

A Mast On No Shore

A Mast On No Shore is one of the last Wolf Eyes releases featuring Mike Connelly, and was recorded at the group’s Ypsilanti, Michigan rehearsal space (shared with silk-screening operation VG Kids, where Olson worked), located above “a literal blood bank.” “I basically lived there,” says Young, “and Olson would finish work, [and] then we’d grab 40s [of beer] and start jamming.” Accordingly, A Mast On No Shore is a squelching, jammy endeavor that sounds featuring ominous, chant-like vocals from Young, and pronounced, skronky sax from Olson.

“Dilloway and I were into environmental records, and Droll Yankees was a Providence label that put out environmental records that didn’t have talking,” says Olson of the Droll series. “Nate owned like six records. One was [NYC art-rock band] Big Stick, and the rest were environmental records… when we were living in Ferndale, Sunday was the jam day. Nate would program beats, and I’d jam along, having developed a casual play-along style, circuit bending out. We’d be at it for hours.” Young remembers the Droll sessions slightly differently: “John would be spray-painting a release in the garage, leaving his handheld recorder on, and coming in and out of the house while I was programming. A week after, he’d give me a tape of my programming and his wandering and tell me he had released it.” Wolf Eyes is set to reissue some of the Droll material soon.

Not a Wolf Eyes release, but a substantive representation of the group’s development. Though Young began his journey into experimental music out of pure curiosity, as he evolved, started to learn music theory, and modular synthesis,. Volume One: Dilemmas of Identity didn’t fit with his solo project Regression, a project rooted in Italian library music, and though Young still utilizes much of the same gear—his modular equipment as well as tapes and homemade materials—this record has much more of a soundtrack-style composition. Dilemmas of Identity oscillates between moving and melancholy segments to more pummeling, experimental recordings.