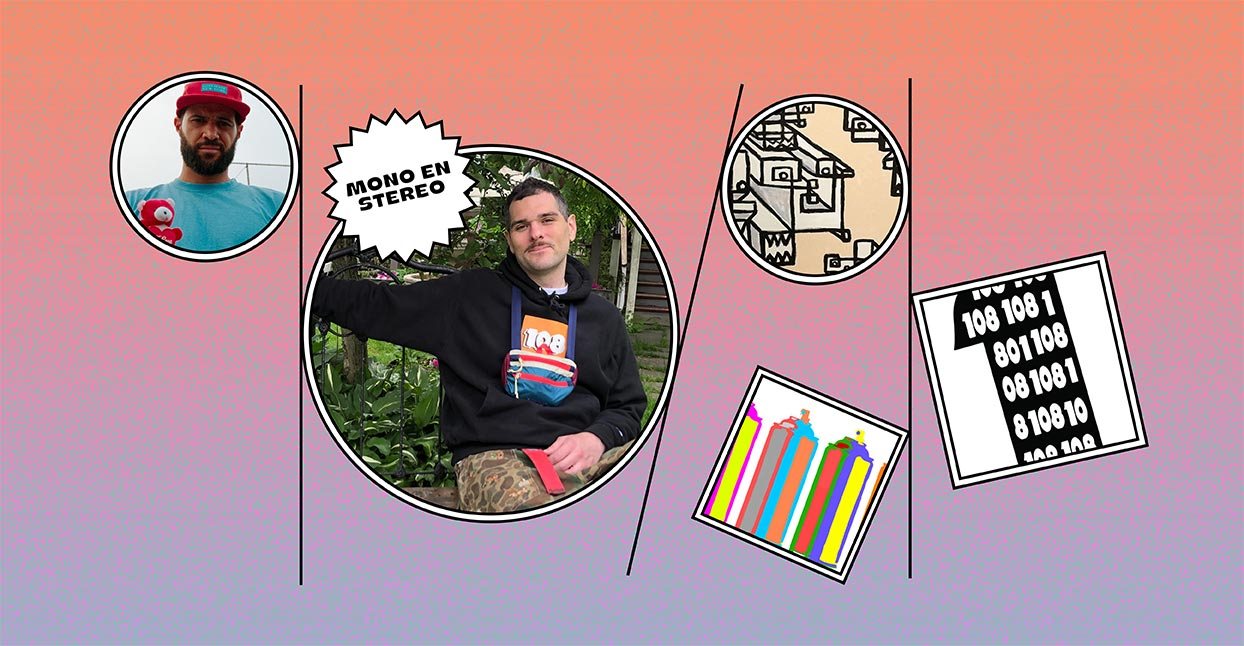 “I don’t think I’ve ever told this to anybody before, but the first beat I ever did was influenced by DJ Premier’s production for the Notorious B.I.G.’s ‘Ten Crack Commandments,’ where he’s cutting up this Les McCann record,” says El Richard Moringlane, the New York City beatmaker who produces under the handle Mono En Stereo. The track Moringlane is talking about is “Show Me Your Gratitude,” which he produced for the rapper L Fudge. After the song was included on Rawkus Records’ iconic 1997 indie rap compilation Soundbombing, the kooky high-pitched flute loop Moringlane based the track around wormed its way into the consciousness of a generation of underground hip-hop heads. Moringlane’s first beat may have been influenced by Premier—but it announced his arrival as a producer with an innate talent for chopping up loops in a hypnotic fashion.

Since that time, Moringlane has gone on to rack up a list of rap clients that includes De La Soul, Action Bronson, and Mos Def. He’s also forged ongoing creative relationships with acclaimed artists Homeboy Sandman and Your Old Droog, two MCs for whom he crafted entire projects. Along the way, Moringlane has become renowned for mining jazz and rock samples, and sculpting flashes of wavering electric guitar and slinky infusions of brass to create entrancing hip-hop productions.

“Writing to Mono beats is like meditating,” says Homeboy Sandman, who worked exclusively with Moringlane’s beats his latest album, Dusty. “I get swept away. The pen moves itself. I open up my eyes and I’m someplace I’ve never been before.”

Along with producing Dusty and dropping his latest soul-packed instrumental album (Lost At Home), Moringlane also created tracks for the late Mobb Deep rapper Prodigy, which he hopes will soon see the light of day. (Also unreleased: a full album with longtime MF Doom cohort Kurious.) While Moringlane readies his next wave of projects, here’s a brief guide to digging through the vast depths of his Bandcamp vault.

Moringlane first met New York City rhymer Homeboy Sandman in 2007, at an anniversary show for DJ Sucio Smash and Timm See’s WKCR college radio show. “They were kind of the guys that took over the Stretch [Armstrong] and Bobbito [Garcia] time slot, and they invited all these MCs up and had people play live beats,” he recalls. “But it wasn’t until some years after that Homeboy Sandman and I really started jamming.”

In 2013, Moringlane was enlisted to produce all eight songs on Sandman’s Kool Herc: Fertile Crescent. The release was intended as an homage to the essence of old school hip-hop—and his production work on the album recalls the immediate thrill of hearing a block party DJ spinning breaks. “Oh, The Horror” rolls along with a deep, bubbling bass line and sultry snatches of Latin-tinged electric keys; “Dag; Philly Too” is all swaggering electric guitar lines and fuzzy Rhodes; ”My Brothers” backs the MC’s tricksy flow with a cowbell-powered beat. Sandman himself describes Morninglane’s beats as the perfect distillation of, “soul, warmth, texture, funk, and knock.”

Morninglane worked with Your Old Droog for the Brooklyn MC’s 2014 self-titled debut at a time when he, “felt really comfortable with what I was doing in terms of my musical voice.” The production is anchored by rugged, syncopated drums, bluesy piano loops, and boisterous blasts of brass—a combination which bolsters the MC’s husky tone and whip-smart punchlines.

Droog helped shape the productions by picking out tracks from a couple of beat tapes named Sam and Keith that Moringlane had given him. “At the time I started giving batches of beats random names,” Moringlane recalls. “Sam was after a character in Wes Anderson’s Moonrise Kingdom, and Keith was ’cause I’d just read the Keith Richards autobiography.”

Once Droog had ear-marked beats on the tapes, Moringlane says the rapper asked him to “hone in on a certain part,” and would tell him “to extend it or bring this part in.” Reflecting on how the songs on the album adapted from the original beat tape sketches, Moringlane adds, “Droog really knows how to sequence and select stuff the way he likes.”

Released in 2016, 108 Part 1 is a homage to the positive effect J Dilla‘s music had on Moringlane. “I was falling out of love with hip-hop at one point, but then J Dilla’s beats kinda brought me to another place and really made me happy again,” he says. Fittingly, the album moves in a sweeter, more melodic direction than other pockets of Moringlane’s discography. Opening cut “Overwhelmed By Beauty” feels like a shimmering slice of ’70s jazz-fusion; “On Our Way” sashays along with honeyed disco influences; and “Open Up Your Heart” is built around harmonious keys and a hazy vocal sample.

Beyond inspiring 108 Part 1, digging into Dilla’s production techniques also caused Moringlane to switch up his beat-making philosophy. “I always bug out how, on the Busta Rhymes album Anarchy, Dilla sampled a Stereolab record [on “Show Me What You Got”] which had probably only come out a year before,” he says. “Something like that used to seem so taboo to me, like I’ve got to dig for an obscure record to sample something. But Dilla was almost saying, ‘Man, if it’s dope, it’s dope, I don’t care when it came out, I’m gonna rock it.’ Little things like that really opened me up.”

The number 108 that features in the project’s title—and across many more of Moringlane’s releases—also represents a personal outlook on making music. “It breaks down as something, nothing, everything,” says Moringlane. “When I got cool with Prodigy from Mobb Deep, he told me the stuff I was making was like shit that’s not dated and could last a long time. That’s what it’s about—I like music from the past, I’m living in the present, and I want the music to live way beyond me.”

Uptown Painters Union is inspired by Moringlane’s early days as a graffiti artist, growing up around Dyckman Street in Manhattan. “It was a big part of my life, and I’d go out on little missions and I used to write the name Krez when I was a kid,” he says. “It’s something that’s carried with me. I always say graffiti is the purest aspect of hip-hop, because it’s guys risking their freedom every time they go out. And there’s no pay behind it really—it’s all about the rush and the art.”

The 11 songs that make up the 2016 project reflect the environment it is meant to mirror. The syncopated percussion running through “Smooth Talker” feels like the rattle of elevated subway cars; the open hi-hats pulsing through “Woodchuck Chuckin’” sound almost uncannily similar to blasts of a spray can; and the deftly-chopped loops and changes of pitch on “Snake Bite (Pear Cider & Guinness)” feel like a high-speed chase through city streets.

(Very Extra) Ordinary People showcases Moringlane’s approach to remixing songs by spotlighting some of the producer’s more experimental beats. “I wanted to go in a direction that’s a little left,” he says. “It’s hard sometimes for me to get people to rhyme over some of my more bizarre shit, so this was, like, a self-fulfilling release.”

The project sparks to life with a flip of Gang Starr’s “DWYCK” that backs Guru and Nice & Smooth’s upbeat party-starting rhymes with a classic funk breakbeat slowed down to syrupy effect. Busta Rhymes’s “Ill Vibe”—which was originally conceived by Q-Tip, J Dilla, and Ali Shaheed Muhammad’s The Ummah production unit—is transformed from low key dusky mood music into an infectious melange of psychedelic keys and punchy drums. Common and Sadat X’s “1999” is broken down into two separate beats: Common’s verses are paired with a spacey backing track, while Sadat’s nasally-flow comes to life over abrasive drums, topped with a demonic piano loop. “I could never match both MCs on the same record so I decided to chop it up that way,” explains Moringlane. “This goes to show how amazing a guy like [original producer] Hi-Tek is—that he can have Common and Sadat on the same record and it makes sense.”

2017’s Welcome Mistakes is Moringlane’s statement about producing music—and creating art—in the modern age. “Because of digital recording, there’s a very small zone to make errors,” he explains. “If you’re recording something digital and it goes into the red, it’s going to distort. But in the ’90s, if you were recording in an analog capacity and something went into the red, sometimes it was really great, and gave it an extra punch, especially if you were recording drums. On an SP-1200, I’d always have the volume going to the peak level with the snares and kicks to give it extra power and crunch. So on this project, I wanted to take the approach that the mistakes are always needed.”

This mentality makes Welcome Mistakes feel free and unfettered. ”L’Elephant” is a melange of electric guitar and brassy growls, both of which compete for space; “The Ruby Biscuit Tray” spotlights drums that hit with a beautifully distorted crackle; and “Heart Of Night” is a raw, bluesy piano loop that would happily host verses from Droog.

Morginlane’s approach to the record was philosophical. “I almost like to think the mistakes are the universe talking back to you, like do this and do that. So I started to accept some of the mistakes I was making as challenges or workarounds, like maybe I should listen outside of myself. Mistakes can be good.”

“Having Mono En Stereo captaining an entire full length was a long time coming,” says Homeboy Sandman. The chemistry between the MC and producer gives the project a seamless feel, with thick bass lines and warm melodic loops proving a natural foil for Sandman’s smart, intricate verses. “I think I’ve worked with some of the best people to ever be an MC,” says Moringlane, “and when I think about Homeboy Sandman, and the pockets and the patterns that he creates, and the vocabulary he has, it’s crazy. When I think about writing a good rhyme—what he does it takes it to a place that’s like, ‘Wow.’”

The natural blend between producer and MC comes to a head on key cut “Far Out,” where Sandman lyrically coasts over a soulful backdrop of fuzzy keys and gently rolling drums that radiate a positive aura. “It made me happy to hear this one—it sincerely put a smile on my face,” says Moringlane. “I feel like music is accomplishing its highest purpose when it’s soothing and brings forth peace.”