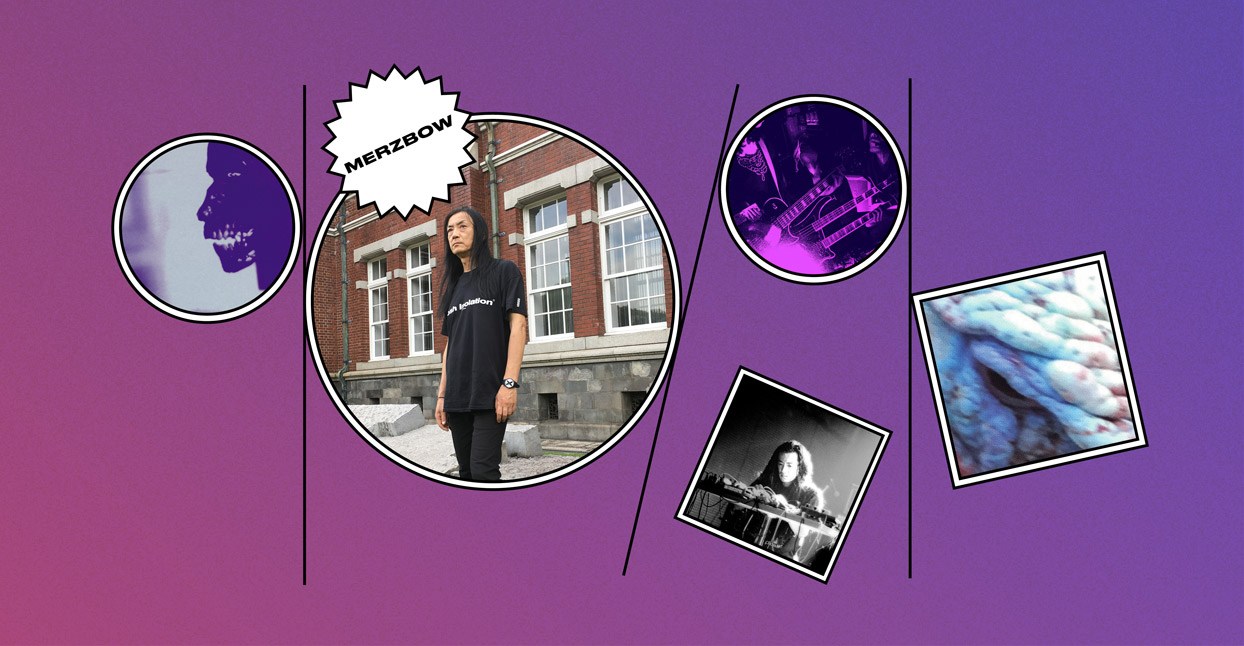 Forty years after he first started recording as Merzbow, Masami Akita’s music is no easier to categorize. Though his creations are perennially pigeonholed as noise music, anti-music, and even über-music, the sheer magnitude of his output will always present an obstacle to easy classification. Consider Mike Connelly’s comments in the opening episode of Merzcast, one of two recently launched podcasts attempting to scale Akita’s entire discography—which currently towers at 432 releases and counting: “Like, what is he thinking when he’s doing this?!”

Connelly’s question will likely go unanswered, as interviews with the man himself have often muddied the waters further. In Brett Woodward’s Merzbook, Akita is quoted as saying, “When I use words, say album titles, they are not chosen to convey any meanings. They are merely selected to mean nothing.” And yet, when this committed vegan dedicates tracks to an endangered species and utilizes manipulated samples of the animal in question, the results prove as loaded as “Meat Is Murder” by The Smiths.

Merzbow’s methodologies have also been elusive. After a period of abandoning analog techniques in favor of a supposed allegiance to digital purity, handmade or modified stringed instruments crept back into Merzbow’s equipment lists, along with synths and effects pedals, used in combination with computers.

Merzbow’s style is infamous for its excess, sheer extremity, and unapologetic harshness, but the din is more nuanced than meets the ear. His (anti-)music also makes deft use of space, flux, flow, movement, and detail—qualities that few of his noisy imitators have managed to master. Much like narcotics, Merzbow’s music affects different people in different ways and, even in small doses, can have a different impact on the individual each time they experience it. It can induce alarm or elation. Sometimes it feels overwhelmingly suffocating; other times it can be meditative or cathartic.

It is certainly not monolithic. While Merzbow’s uncompromising noise aesthetic is used as a punchline in some quarters, the idea that Merzbow releases all sound the same is faulty. Maybe that’s what led the cultural critic Greg Hainge to claim in his book Noise Matters “Any attempt to render Merzbow’s music in words will necessarily be inefficient.” Still, we’re up for the challenge. Here’s a streamlined guide to the many, many shades of Merzbow.

Merzbow got a commercial boost in the ’90s thanks to Release Entertainment—an affiliate of the esteemed metal label Relapse—who released his albums Venereology (1994), Pulse Demon (1996), and Tauromachine (1998). The imprint’s storied reputation and generous distribution reach made a crossover all but certain for this formerly underground artist, as did the hellish artwork for Venereology, which appealed to the grisly tastes of metalheads. (The sticker on its front cover proclaims the full-length as “The most extreme recording you will ever own!!!”) Ostensibly Merzbow’s interpretation of death metal, Venereology is actually more in the black metal vein, thanks to its nightmarish swirls of shrieking noise.

“That’s not music; that’s just noise!” It’s a timeless accusation that has been used to undermine both free jazz and, naturally, noise music. That the two genres share an affinity, then, hardly comes as a surprise. One of Merzbow’s jazz-sampling albums, Strange City is built around rare material from the Sun Ra archives, spliced here into a clattering cacophony, complete with mutated horn parps rising in and out of the maelstrom.

Criticisms of Merzbow’s collaborative endeavors frequently (and given the nature of his craft, understandably) center around the minutiae of sonic space. Place Akita too high in the mix, and his gravity will inevitably obscure the other players; place him too low, and he fades into the background, becoming a non-entity. Solving that problem is Gensho, one of several joint albums with drone rockers Boris. Each act’s contribution appears on a separate disc so the listener can play the material simultaneously on two different devices, adjusting the volumes as they see fit.

Merzbow is a vegan and animal rights activist whose T-shirt slogans have included “Don’t Kill Dolphins” and “Pigs Are Not Ours To Eat.” As such, he’s a perfect match for Oaken Palace Records; the profits from all the label’s releases go towards an environmental cause of the artist’s choosing. Named after an endangered parrot, Merzbow’s contribution to the label supports the Kakapo Recovery, and offers two sides of bristling white noise layered on top of underlying drones that add a disarming tenderness to the recording. As much as industrial, metallic, and electronic terms are used to describe Merzbow’s music, it’s worth remembering how much it shares with the extraordinary noises of the natural world. There’s the howling of the wind. There’s the splashes, crashes, burbles, repetitions, and ripples of tempestuous waters. And there’s the chirps, cheeps, clicks, croaks, squeaks, hisses, barks, and oinks of our bestial brethren.

Though the idea of “mellow Merzbow” might seem like a contradiction, he did once release a boxed set called Merzbient. And besides, any “extreme” sounding music from Napalm Death to industrial techno can be repurposed as an ambient experience if the volume is low enough. Furthermore, it’s obvious that certain Merzbow releases are calmer than others. Despite being released on another metal label (this time a sub-branch of Hydra Head), 2001’s Dharma is noticeably more tranquil and airy than Merzbow’s ear-battering Relapse releases. Its penultimate track stands out for its use of a discernible piano motif whereas the 32-minute concluding piece, “Frozen Guitars And Sunloop,” sits in that elusive limbo where harsh walls of noise become a meditative sedative.

Even more accessible than Dharma is Merzdub, for which Akita submitted raw material to musician/producer Jamie Saft, who then transformed them into the gentlest and most chilled-out offering in the entire Merzbow repertoire. With its languid piano chords and skanked guitar technique, “Slow Down Furry Dub” is more like something from Lee “Scratch” Perry’s Black Ark studio than anything that’s erupted out of Merzbow’s Munemi House base in Tokyo. Noise purists needn’t be put off, though. “Skinning JLO” retains an industrial edge through its use of echoing percussion while “Kantacky Fried Dub” shoves Merzbow’s signature blizzard-like scrawls to the forefront.

A Merzbow By Any Other Name…

The difference between Masami Akita and Merzbow is not entirely clear; his prolific career as Merzbow hasn’t stopped him from releasing items under his own name. Wattle by Masami Akita contains two 18-minute sides of effects-laden, ear-scraping malice. It’s like hearing a malevolent cyborg scraping their aluminum fingernails down a sheet of rusty metal while stamping on a detuned radio. The actual message Akita would like to convey is more considerate, as brusquely explained by the album’s accompanying message: “Turkey is beautiful animal and do not eat them.”