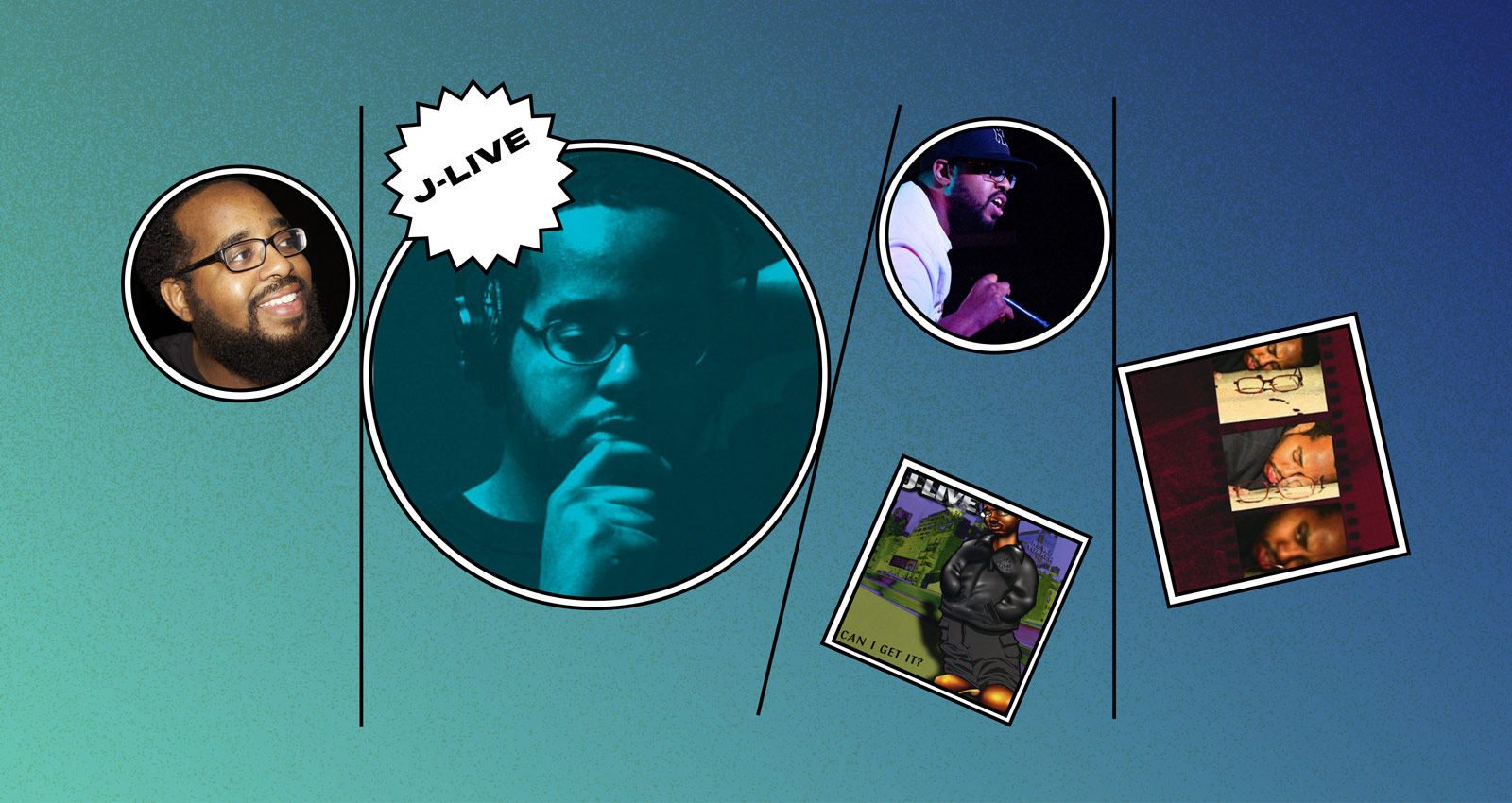 Back in the mid-‘90s, J-Live announced himself to New York City’s fabled independent hip-hop scene as a triple-threat—an artist equally skilled at commandeering the mic as he was crafting jazz-influenced boom-bap productions, and scratching records on turntables with clinical precision. His debut single “Braggin’ Writes” was fueled by a raw, stripped-down break that was cut up and reassembled to form a gnarly musical backdrop. “I displays my credentials over instrumentals/ And my potential increases at a rate that’s exponential,” the MC rapped, previewing the booksmart braggadocio that would come to characterize his work. “It’s detrimental questioning my thesis/ The penetration’s exact, like amniocentesis.”

Major label industry woes delayed the release of J-Live’s debut album, The Best Part, until the tail end of the ‘90s, but since then he’s prospered as a bastion of the indie scene. Over the course of 25 years, J-Live has faithfully delivered his trademark mix of true school hip-hop gospel and incisive socio-political commentary alongside an esteemed list of collaborators that includes De La Soul, DJ Jazzy Jeff and Pete Rock.

In honor of one of the scene’s best, here’s a deep dive into seven of J-Live’s mighty hip-hop releases.

All Of The Above

“The thing I was trying to do differently from my debut was to handle a third of the production myself, as well as having a limited number of producers to make sure everybody has their imprint on the record,” says J-Live of his 2002 sophomore album. “I wanted to make it sound a little more cohesive in that regard.” DJ Spinna forms the core of the compact producer roster, contributing six tracks, including the essential “Satisfied?” Over a hazy, dub-inspired backdrop embellished with eerie echo-afflicted organ, J-Live lets fly with a scathing post-9/11 takedown of the American dream—”a fat wallet still never made a man free.” As J-Live’s enlightened vitriol picks up steam, he lands lines that sound as prescient as ever: “It won’t make a difference in a two-party country/ If the president cheats to win another four years/ Now don’t get me wrong, there’s no place I’d rather be/ The grass ain’t greener on the other genocide/ But tell Huey Freeman don’t forget to cut the lawn/ And uproot the weeds ’cause I’m not satisfied.”

“Can I Get It?,” the follow-up to J-Live’s debut single “Longevity/Braggin’ Writes,” dropped in 1996 on Raw Shack Records—an indie label run by producer Georges Sulmers, for whom J-Live had previously interned. The title track documents a day in the life of an up-and-coming artist heading out to perform a show. “It was a summer morning at the age of 18/ I start the story in the shower singing ‘Microphone Fiend,’” relays J-Live over tough, breakbeat-driven production. Soon, he’s regaling the crowd with his turntable mastery: “Torturing the fader, the Tech 12 freaker/ The bass from the amps shake the stickers off the speaker.” The maxi-single also includes the slinky, xylophone-embellished “Hush The Crowd.” Produced by journalist and DJ Chairman Mao, the song  features J-Live delivering a list of hip-hop performance etiquette do’s and dont’s; there’s also a spacey DJ Spinna and DJ Joc Max remix of “Braggin’ Writes” backed with stony ’60s garage rock drums. “I met Spinna through Georges and we’ve been cool ever since,” recalls J-Live. “The remix beat is incredible. To this day, people consider it one of Spinna’s best remixes and he’s done some incredible remixes from De La Soul to you-name-it, so that’s a banger for sure.”

How Much Is Water

The liner notes to 2015’s How Much Is Water presents it as a social experiment of sorts. J-Live invites listeners to, “consider how much music is worth in today’s landscape.” Having witnessed all the industry’s paradigm shifts firsthand—namely the rise of streaming—the inquiry was only natural for him. “The monetary value of a stream is very little,” J-Live explains. “We use music to sell everything but music! I just wanted people to think about it like water: it’s not a luxury, it’s a necessity. Life without music would be pure shit, you know?” There’s a genial and relaxed jazz influence bubbling through the album’s nine tracks. Opener “Warm Currents” coasts along with tranquil keys and shimmering cymbals; on “Feel This,” J-Live explores the dynamics of hip-hop battling over bluesy piano; and closer “How Much Is Water” builds on the idea of placing monetary value on societal essentials. Standout “Kings Just Rule” nods toward one of J-Live’s formative influences by building on a line from Boogie Down Productions’ anthemic “My Philosophy”—”Teachers teach and do the world good/ Kings just rule and most are never understood”—to spotlight the crucial but overlooked role educators play in the world. “I like to make the kind of music that gives people the chance to think about how society prioritizes things, whether it be materialism, celebrity worship, political ideas, or just the nature of what we place value in,” J-Live says.

The travails of the music industry delayed J-Live’s highly anticipated debut album, so it was somewhat inevitable that certain tracks would end up being bootlegged. “I took it with a grain of salt,” he says. “On the one hand, you have this major label deal and things kinda fall apart. But on the other side, you have this record that kinda breaks out and gets its exposure and becomes this urban legend.” Officially released in 1999, The Best Part pairs J-Live’s percipient lyrics with a royal roster of producers, among them 88 Keys (the maudlin guitar-infused “Don’t Play”), Pete Rock (the scratchy “Kick It To The Beat”) and Prince Paul (“Wax Paper”). Lyrically, the album peaks with “Them That’s Not,” where J-Live delivers a spellbinding rhyme in perfect parallel with the tempo-shifting beat provided by Grap Luva. “The original ‘Them That’s Not’ was verses that would later become the song ‘Epilogue’ [also on the album], but once I heard the beat slow down and speed up and slow back down again, it gave me an idea to turn these verses about people who don’t write their own rhymes and people who bite into a whole story,” he says. “The narrative arc went with the tempo of the beat.”

In 2005, J-Live released The Hear After: an album he says, “didn’t quite turn out as well as I wanted, because we were limited to samples only from within the Rykodisc catalog, and it didn’t necessarily have the flavor I was looking for.” Consequently for 2008’s Then What Happened (released on the UK-based BBE label), he went “back to what would be considered my roots, the period of music I like to sample from and the style I like to use.” It was a savvy retreat; the 13-song album is carried by melodic, mid-tempo, jazz-based loops provided by a cast that includes DJ Jazzy Jeff, DJ Nu-Mark, and DJ Evil Dee; the latter contributes the smoldering, staticky “Be No Slave,” a searing deep-dive into America’s racial politics. Then What Happened also gave J-Live the opportunity to collaborate with Posdnuos from De La Soul, an MC he cites as a huge influence. The track in question, “The Upgrade,” is powered by a chunky soul-packed Oddisee production that’s bolstered by fanfares of horns. ”Oddisee is one of my favorite producers too, and he was young and upcoming at the time,” recalls J-Live.

“People considered me a triple threat—a producer, a DJ, and an MC—so I had this idea: what if they all had different personalities and split up?,” explains J-Live, explaining the concept behind 2010’s Undivided Attention EP. (That theory was fleshed out even further on the following year’s full-length, S.P.​T​.​A. Said Person of That Ability.) The results flex every resource in J-Live’s arsenal: the melancholy “Calculations” showcases J-Live the producer, crafting a ruminative backdrop carried by moody infusions of flute; “The Way That I Rhyme” co-stars MC Boog Brown and includes J-Live cutting up lines from Rob Base and DJ EZ Rock’s classic party-starter “It Takes Two”; and the jubilant “Fitness” gives the MC the chance to test his lyrical prowess against fellow advanced-level wordsmith Homeboy Sandman. Singling out the sprightly title track as a recommended entry point to the project, J-Live recalls writing the song to “get things off my chest in terms of the political climate at the time”—which includes slamming, “I’m still not satisfied/ ‘Til all them necessary laws get ratified/ To bring my people to a social equality.”