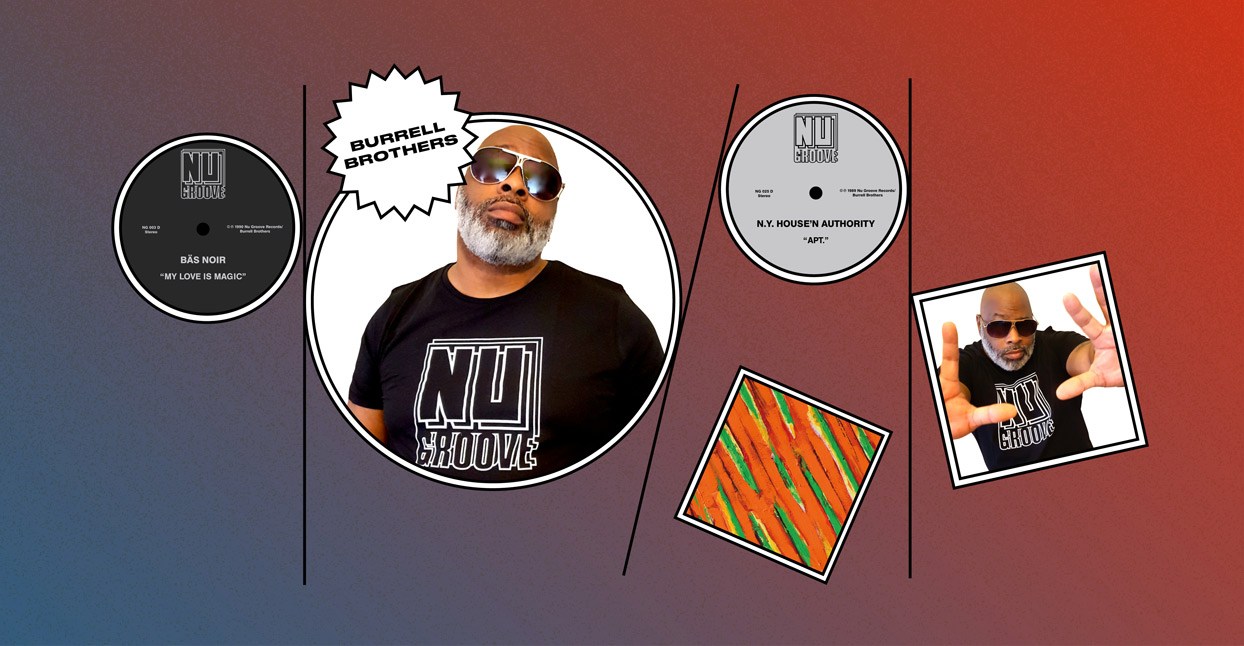 Twin brothers Ronald (Rhano) and Rheji Burrell first fell in love with music when they were children. “When I was in 10th grade, a guy just came up to me and said, ‘I heard you playing keyboards. Want to be in a band?’” Ronald recalls. “I went to the audition, and my brother came with me. The guy who invited me to the rehearsal asked my brother, ‘Well, what do you do?’ and my brother said ‘Everything that he does!’”

The duo soon began working on their own demos in their mother’s basement. With the Roland Doctor Rhythm drum machine providing the pulse, the brothers crafted a series of recordings that showcased their unique take on soulful dance music. Eventually, the duo signed a deal with Virgin Records, releasing the album Burrell in 1988. Though the Burrell brothers saw some success with Virgin, their style of soulful uptempo dance music didn’t exactly find a home on commercial R&B and hip-hop radio.

“The setback was that no Black radio station or pop radio station knew what to play us with. It wasn’t disco, it wasn’t R&B really. It was kind of hard to play what we did behind a Luther Vandross record,” Rhano remembers.

After splitting with Virgin, the brothers found a home for their productions at Nu Groove Records, an indie house music label co-founded by Karen and Frank Mendez who had heard one the brothers’ demos playing in Vogel’s Records. The move from a major label to producing underground tracks suited the brothers well. “We always loved the demos better than the “produced” versions anyway. I like polished, but I love raw,” Rheji adds.

Free of the demands of the major label machine, the brothers spent the next few years working under various pseudonyms and crafting a catalog of rough, anthemic tunes that embodied the sound of ‘90s East Coast house. With tracks like “Angel Of Mercy” (released under the pseudonym Metro) and the classic NY House’n Authority, the Burrell Brothers and Nu Groove carved out a unique sound that predicted contemporary microgenres like lo-fi house.

Throughout the ‘90s and ‘00s the brothers dipped their toes back into the world of mainstream label music, writing and producing for a litany of pop and R&B acts, working with superstars like Aaliyah and co-creating classic R&B jams like Total’s 1996 smash hit “Tell Me.”

“Roland Clark took a tape of our R&B material to Vincent Herbert [producer for Destiny’s Child and Lady Gaga among others] and he put us on. We went multi-platinum from there!”

Today, the Burrell brothers continue to work on new music. But these days, they’re most interested in finding and developing new acts to write and produce for. We’ve selected a few standout tracks and projects from Ronald and Rheji Burrell’s massive catalog.

“My Love Is Magic”

Consisting of vocalists Mary Ridley and Morie Bivins, Bas Noir was a Jersey-based house music duo who released one album on Atlantic Records in 1992. In 1988, the duo tapped the Burrell brothers for their single “My Love Is Magic.” Driven by a prominent vocal house piano, an energetic lead vocal and dense harmonies, “My Love Is Magic” is an uplifting slice of classic vocal House.

Anchored by a deep, syncopated synth bassline and relentless kick drum, “Archives Vol. 2” is the standout cut from this single released on London’s FBNM label. Gorgeous chords leave enough room for a synth lead to flesh out the song’s beautiful, melancholy melody.

Originally released in 1989 under the moniker NY House’n Authority, this six-track EP is a quintessential representation of the Burrell Brothers/Nu Groove sound. Anchored by the classic underground tune “APT 3A”, APT is a rough, soulful, and uniquely East Coast take on deep house. The project’s sleeper cut “APT 3B” positions a gliding flute melody above buttery synth chords, capturing that free, optimistic feeling that only the best house music can evoke.

A standout in the Burrell catalog, “Amazin’” is the 1995 single from North Carolina-based MC Omniscence. The slick wordplay in Omniscence’s second verse was strong enough for him to win The Source’s coveted Rhyme Of The Month. Although both brothers are well known in the dance music world, “Amazin’” is a reminder of the duo’s versatility, as Rheji lays down a thick slice of brass-heavy, mid-tempo boom-bap.

The product of one of the Burrell’s more ambitious monikers, Metro’s $1.15 Please shows off the brothers’ broad stylistic range. Built around congas, a repeating flute motif, and squelchy synth bass, “Rush Hour” occupies a curious space between deep house and acid. “Straphanger” is a funky dark electro-pop while “Brownstone Express” is a dreamy, ambient-leaning house tune.

“When Can I Call You”

Originally released in 1990, Lisa Lee’s Ronald Burrell-penned tune “When Can I Call You” fits in right along the era’s more well-known classics like “Let The Music Play” and “I Wonder If I Take You Home.” Complete with telephone dial tones, synth strings, and a bouncy beat, “When Can I Call You” is a fun and accessible jam that captures the full spirit of dance music in a little over five minutes.