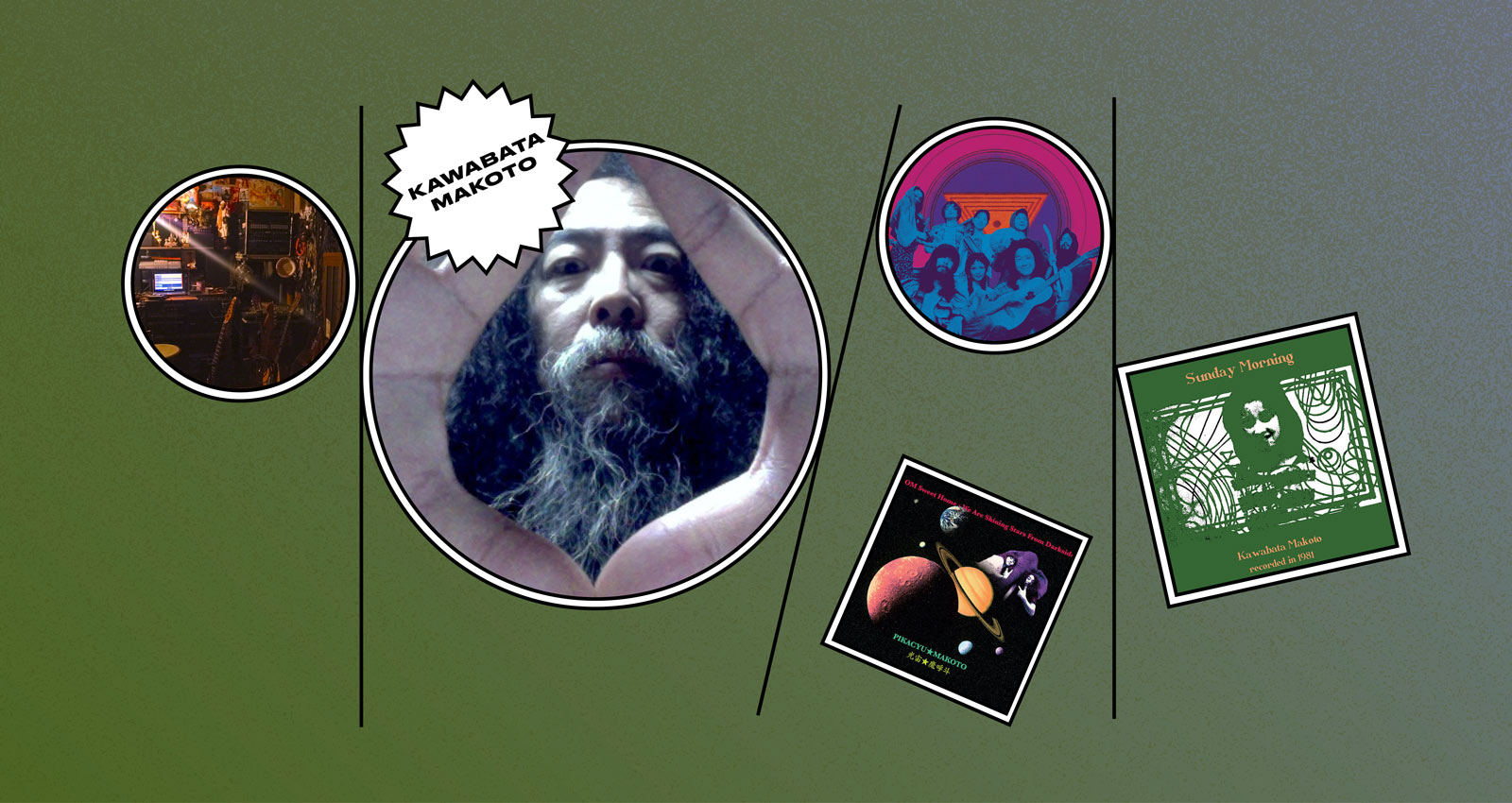 Kawabata Makoto is not a cult leader, but he’s been mistaken for one before. His best-known project, Acid Mothers Temple, first germinated as a “soul collective” jamming in a big shared house in Nagoya, Japan. That lasted until his neighbors reported them to local authorities under suspicion of being members of Aum Shinrikyo, the doomsday cult behind a deadly 1995 subway attack in Tokyo. They weren’t, but he lost the house nevertheless—and the association stuck. Twenty years later, his solo tour of China was canceled due to an anonymous report of Kawabata’s suspected ties to cult activity.

Admittedly, the self-taught guitar guru’s worldview can be challenging to parse. He cuts a memorable, if enigmatic, figure on stage: a gentle face framed by an uncombed mane of curls and a gray-veined beard he’s been growing since the early ’90s. An 80-question FAQ on the Acid Mothers Temple website touches on UFOs, 17th-century Dutch missionaries in Japan, Indian classical music, Trout Mask Replica, and various facets of a cosmic mind-frame that brushes against Buddhism but ultimately resembles no organized belief system.

If there is one belief gluing Kawabata’s several-hundred-title catalog together, it’s a conviction that he’s a corporeal tuning fork, a radio receiver transmitting psychic noise from his mind to the outside world. He suffered from tinnitus as a child and believed the constant ringing was a message from extraterrestrial intelligence. Around age 11, he heard the music of Karlheinz Stockhausen on a late-night radio show, and something clicked. “If this is a kind of music, my ringing may be music too,” he thought. A year later, he discovered rock ’n’ roll, was viscerally attracted to The Who’s rhythm section, and later wandered down the rabbit hole toward Zeppelin, King Crimson, and Deep Purple. “One day, I got an idea,” he says. “If my two favorites, Stockhausen and Deep Purple, played together, what great music they would play! I tried to find music like this, but I couldn’t… [so] I decided to start playing music [myself].”

The initial compulsion to externalize the ecstatic ringing in his own headspace became a decades-long habit that shows no sign of abating. In 1978, he formed his first band, Dark Revolution Collective, experimenting on a gifted Roland System 100 synthesizer and a collection of handmade instruments; he couldn’t afford anything else. Kawabata ultimately settled on the guitar as his tool of choice, jamming in ad hoc ensembles before establishing Acid Mothers Temple as a loosely structured collective improvising spaced-out, prog-psych opuses in the lane of Magma and Gong, but without the costumery or high-minded concept. “I’m not interested in so-called psychedelic [music],” Kawabata demurs when asked about the long, strange road he’s still traveling. “I’m only interested in music that takes people to another stage.”

For the last 15 years, Kawabata has lived alone in a small Buddhist temple on top of a mountain in Asuka, two hours from his birthplace of Osaka. The actual Acid Mothers Temple is about as off-grid as a place can be these days: only three families live in the vicinity, there’s no internet, and it’s often hard to get a cell phone signal. The remote setup—a rarity in densely populated Japan—allows him to crank up the volume and jam late into the night, a priority outranking everything else. (“I choose a good situation for making music rather than a convenient life,” he says.)

If there’s one thing Kawabata might enjoy more than playing music in his hermetic noise shrine, it’s playing music everywhere else. With Acid Mothers Temple, a band that’s cycled through dozens of members over the years, he has toured exhaustively across Asia, Europe, North, and South America, spending at least two months out of every year on the road. Naturally, he hasn’t been doing that in 2020. “I’ve seen my neighbors only three times in five months!” he exclaims, adding that he’s seen plenty of deer, raccoons, foxes, and wild pigs during his months-long COVID-19 isolation.

The 55-year-old artist launched a Bandcamp in June to compensate for the lack of touring, his primary source of income. Each week he’s uploading two albums from his extensive back-catalog—he says he has enough to do this for a year and is in the process of putting together a separate Acid Mothers Temple Bandcamp, which means another 100+ titles. Here are seven releases that showcase different phases of Kawabata’s far-traveling career.

Among his most recent recordings, made during COVID-19, Rising Ultimate Buddha is one of two quasi-devotional drone albums dedicated to Buddhist deities. This unit is dedicated to Vairocana, a figure especially prominent in Chinese and Japanese Buddhism. It sounds like the background music of an esoteric initiation, with sporadically crashing gongs punctuating a quavering, high-frequency drone achieved with guitar, synth, tape loops, and an electric version of the shō reed instrument—all of it performed by Kawabata. Another in this series, Ultimate Dark Buddha, is dedicated to the red-skinned, six-armed, three-eyed deity Rāgarāja, and probes darker, jammier territories with a plodding, dirge-like drumbeat.

This is the earliest recording that Kawabata has made available via Bandcamp. Initially released as 1981 as a cassette on his own R.E.P. label, it showcases an early interest in musique concrète stemming from Kawabata’s chance encounter with Stockhausen as a kid. Already present in these two tracks is a sense of Kawabata’s spiraling curiosity, a distinctive sonic cosmos shaped here on “2 cassette decks, a half-broken radio cassette-corder, tapes of field recordings and something else and a synthesizer.” It’s not his first recording—hopefully, we’ll get more cuts from the Early Works 1978-1983 box set as he continues to curate his history on Bandcamp—but it’s a reliable foundational document laying out a rough blueprint for the diverse array of sounds to follow.

Mellow Out (with Mainliner)

Around the same time that he founded Acid Mothers Temple, Kawabata also lent his guitar to this cult classic album by the legendarily blown-out heavy psych unit Mainliner. He’s credited as playing “motor psycho guitar” on this, perhaps the most misleadingly titled album ever, alongside bassist/vocalist Asahito Nanjo of the equally unchained heavy psych group High Rise, drummer Hajime Koizumi, also the first drummer of AMT. The whole thing sounds like it was recorded on one broken mic positioned far too close to the dialed-at-eleven amps, and it documents some of Kawabata’s most sublime, unfettered shredding. It still holds up as an audacious testament to the guitar genius of a man who twice saw the near-mythical, Velvets-inspired ’60s Japanese rock band Les Rallizes Dénudés and found them too tame (“just the same atmosphere, boring songs, and a loud, super-boring guitar solo…”).

Though his discography is vast and his collaborations are myriad, it’s Acid Mothers Temple that remains Kawabata’s best-known, most-loved project, the engine that’s driven his incredibly packed tour schedule over the last few decades. It all started with this self-titled album, on which he plays guitar, synth, recorder, “cosmic ring modulator,” and sārangī, a bowed Indian instrument. The band’s debut remains one of its strongest statements of purpose, a lodestar lending heft to the sprawling morass of unrehearsed jams to come. It’s a highly satisfying dose of vintage psychedelia that could have been unearthed from a time capsule buried at the precise moment when the orgiastic excesses of the ’60s began to meet their violent demise. Kawabata’s Bandcamp page features numerous AMT-adjacent projects, including Hot Rattlesnakes by Kawabata Makoto & The Mothers of Invasion (one of many spinoff groups), and NANI∞GURU, a duo formed by Kawabata and current AMT drummer Satoshima Nani.

You Are The Moonshine

Among the most recently uploaded albums on Kawabata’s page is his first solo guitar album, recorded in his temple in 1999. The sound skews more restrained, his instrumentation limited to only guitar. Three soft, sustained drones are gently coaxed out of the ether with an ebow throughout this lunar-themed recording, an alter-ego to the freewheeling, wild-haired bandleader one hears across the Acid Mothers Temple discography. For more in this vein, check out Under Your Moonshine, a sequel to You Are the Moonshine recorded a few years later, and I’m In Your Inner Most, a minimalistic, tambura-droning ensemble piece featuring spare and ethereal vocals from French musician Audrey Ginestet.

Other collaborative releases hew closer to the Acid Mothers Temple sound. The spacey, panning vocals on this track will be instantly recognizable to fans of Afrirampo, a noise-pop duo that’s toured with Sonic Youth and Lightning Bolt. Afrirampo’s drummer and vocalist Pikacyu, a fellow Osakan, has collaborated with Makoto several times, including on this album, whose title and cover art signal shared cosmic vibes between the two. The jagged and jangly no-wave arrangement on standout track “Oscar No Hope” represents the rare under-one-minute track on Kawabata’s discography. Fans are also advised to check out the duo’s collection of Live & Rare nuggets.

Another one churned out in the COVID-19 era—and for now, a Bandcamp exclusive—Vanishing Dream in Mirage Space collects Kawabata’s most recent work on electronics and synthesizer. Since the beginning, these tools have been in his repertoire and have never left, despite his ostensible preference for guitar. On this recording, a simple rhythm box pumps out a driving bass throb, which grounds a wiry, arpeggiated, at times quite harsh skitter of high-pitched synth screams that sound like they could be collating communications between distant satellites. “I try to be a good radio tuner, to catch sounds from my cosmos, pose my body, and reproduce this exactly as music by hands,” Kawabata says of his overall approach, from 1978 to today. “I have become a better tuner, year by year. I can catch more details of sounds now. When I was a child, I could catch only a few, that’s why I felt it was ringing [in my ears]. If I can’t catch any sounds from my cosmos, then I should stop playing music.”