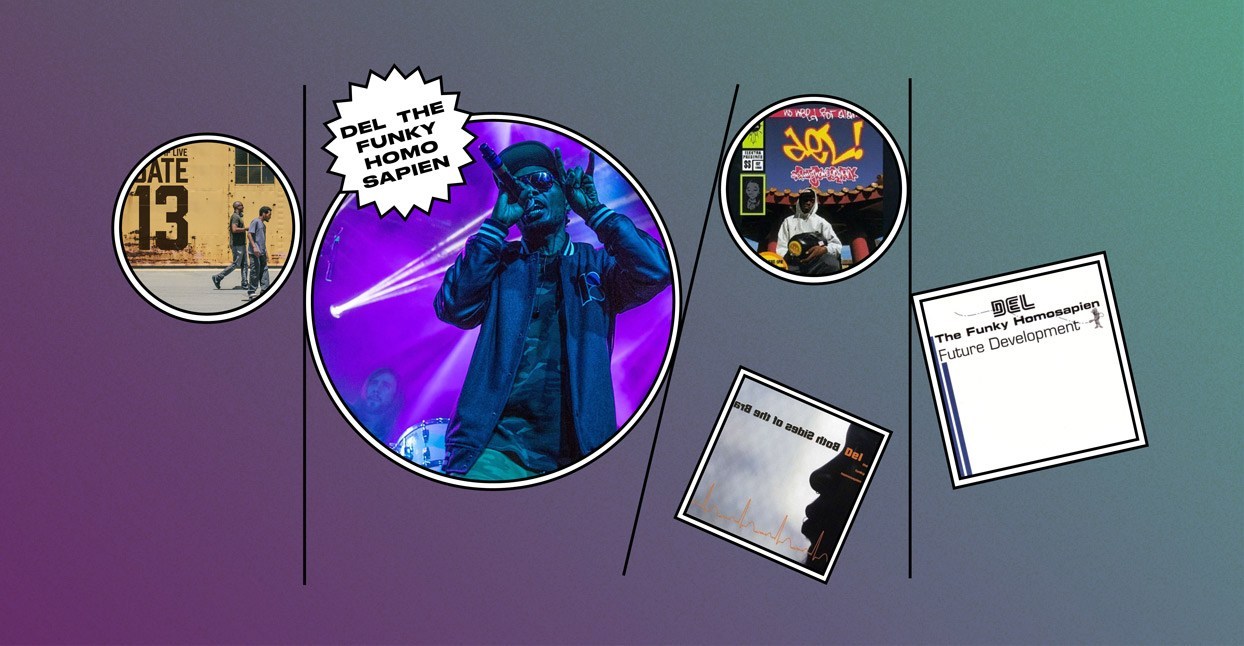 Del The Funky Homosapien first appeared during hip-hop’s fabled golden age, announcing his talent with a breezy flow and a steady stream of animated lyrics. On his debut, 1991’s I Wish My Brother George Was Here, the Bay Area MC’s style felt like a smart and refreshing counterpoint to the commercially dominant gangsta rap coming out of California. Since then, Del’s racked up one of the most vibrant rap discographies around, including solo releases on major and indie labels, prescient sci-fi concept albums, and frequent collaborations with the Hieroglyphics crew.

Del has always been intrigued by poetry; when he was younger, he found himself drawn to a copy of the children’s book The Cat In The Hat. “I guess I was into Dr. Seuss’s rhyming,” he says. Then he heard Melle Mel rapping on Grandmaster Flash and The Furious Five’s “The Message,” a pivotal slice of rap reportage credited with bringing a socio-political dimension to hip-hop lyrics. “I could relate to it—like, yeah, I see the broken glass outside,” he says, referring to a classic lyric depicting urban blight. “It wasn’t just a song about, ‘Oh, my mom hates me.’” Having been writing haikus since he was in fifth grade, Del graduated to rap lyrics, eventually snagging some songwriting duties for his cousin Ice Cube before pursuing his solo ambitions.

With a recording history that spans nearly three decades, Del’s become renowned for continually updating his musical style in a bid to sound fresh. “I’m not stuck on doing stuff the way I was doing stuff 20 years ago,” he says, mentioning that he’s been studying humor writing to make sure his punchlines hit home, and his concepts are conveyed clearly.

Speaking from his Bay Area home base, Del walked us through seven crucial releases in his vault.

I Wish My Brother George Was Here

Del’s debut is a kaleidoscopic hip-hop record comprised of buoyant samples from Parliament and the P-Funk All-Stars. His cousin Ice Cube, who was already rapping over a lot of funk breaks, claimed the role of executive producer. “P-Funk hella informs the way I play music,” says Del. “It’s a lifestyle, and certain ideals you go by. It’s saying it’s OK to have your own vision and go your own way, even if other people might not understand that.”

The album is spearheaded by the single “Mistadobalina,” which adds to the sample-heavy style by incorporating a vocal loop of a Monkees song that Del originally captured via holding a “big ass kinda tape cassette recorder to the TV to record it.” He adds, “I noticed when ‘Mistadobalina’ came out the Monkees had a little wave. I hella love the Monkees, ‘cause they never tried to sue me for that sample!”

Del’s writing throughout the album—which he admits was partly inspired by “doing psychedelics and fooling around”—has an endearing, youthful quality to it. On the piano-fueled “The Wacky World Of Rapid Transit” he kicks a tale about the trials of riding the bus (and, eventually, missing his stop and having to trek 15 blocks home). “Sleepin’ On My Couch” is about freeloading friends taking advantage of his hospitality. “It was fun back then,” he says. “Everything was new and I was happy just to be coming out—I hadn’t yet dealt with the pressures and the red tape. It was way more easy—but I was a kid, too.”

No Need For Alarm

Del casts his 1993 sophomore album as a reaction to the stresses of the music industry. “At that point, I felt like I had a lot of problems, and I don’t think I really understood where they were coming from,” he admits. “I just had a funky attitude in general.” Del adds that he also felt “peers around me were unsupportive,” maybe due to “jealousy and the way my [debut] album came out with the P-Funk and shit, and they didn’t approve of it as hip-hop listeners. I think they thought [Ice] Cube forced me to do it, like I was going pop or some shit.”

Fueled by some degree of ire, No Need For Alarm dials back the production to a mix of stripped-down drum loops, dusky jazz samples, and a few eerie atmospheric touches, with beats provided by Hieroglyphics crew members Domino, Casual, and Jay-Biz, industry A&R Dante Ross’s SD50’s production unit, and Del himself. It’s a transition that mirrors the change Del’s East Coast contemporaries De La Soul and KMD experienced between their first and second albums, where a positive and optimistic attitude became soured by the music industry and inspired music with a darker vibe. As part of this transition, Del’s rapping is feistier and angrier, taking pride in disposing inferior rappers (“Wack M.C’s”) and teaming up with his Hiero pals for the vicious posse cut “No More Worries.”

While recording Future Development, Del found himself dropped by his major label, Elektra. He remembers record industry executive Sylvia Rhone visiting him in the Bay Area: “I wasn’t selling hella records as far as they were concerned, maybe something like 200,000 copies, but I guess she thought I was cool. We had a meeting and she told me, ‘Let’s see what we can do to keep you on the label. What do you think about rapping over DJ Premier’s beats? What about Pete Rock?’ I’m like, yeah, but I do what I do, why would I want to go with that? I guess I was feeling myself. I just kinda flubbed the whole thing, and basically I got dropped from the label.”

At this point, Future Development entered rap lore as one of the genre’s great unreleased albums—until Del took the innovative approach of selling cassette copies direct to fans via the Hieroglyphics website in 1998. “The songs aren’t even mixed, it’s just what I had before I was finished,” he says. “I was gonna do some shit with De La Soul, I asked Redman to produce for me, but it never got to that point.” The tone of Future Development feels like a midpoint between Del’s first two albums, bringing back a little of the funk and veering towards sunnier ‘70s soul samples (“Stress The World”). Addressing his industry issues, “Del’s Nightmare (Slave Master)” is a warning for upcoming artists: “You get signed, you’re thinking this is great / But wait, you never knew what was at stake / Creative control they withhold, you sell your soul / When you sign on the dotted line, hoping to go gold.”

Both Sides Of The Brain

1999’s Both Sides Of The Brain is a gem in Del’s discography. Now contentedly recording for the Hieroglyphics Imperium indie label, there’s a futuristic, almost cyberpunk aura to the project, which blends seamlessly with Del’s luminous flow. In “Proto Culture,” Del and guest K.U. craft one of the most glorious video game-themed rap songs of all time, namechecking a litany of rare import titles over an ebullient beat that samples from the Darkstalkers game.

Outside of the Hiero camp, Both Sides Of The Brain features a couple of notable collaborations. Prince Paul contributes “Signature Slogans,” a piano-helmed track recorded on an Akai DPS personal studio, which Del says the iconic producer hipped him to: “He was the first dude I seen with one of those, and we did the song and I was like, ‘That’s it, we really recorded it, we don’t have to go to the studio?’ I looked at Domino [his manager] like, ‘I’m gonna get one of them and I never have to go to the studio again!’”

El-P also produces and adds guest raps to “Offspring,” which is all jittering drums and dystopian sci-fi ambience. Del hung out at El’s house for a few days to create the track. “I was tripping off how he was making stuff,” he says. “El-P has a rock sensibility to his stuff, but also a hard angular hip-hop roughness too that hella resonated. Of course, I had to have him on the song rapping, too; I used to be blown away by his raps, like, ‘Damn, dude really is like this genius lightweight neurotic, always thinking about shit.’”

Deltron 3030 is a sci-fi concept album released in 2000, recorded by Del alongside producer Dan The Automator and turntable wiz Kid Koala. The story casts Del rapping as his Deltron Zero alter ego in a battle against nefarious monolithic corporations who control a “post-apocalyptic world / Morbid and horrid.” The idea came from the MC’s interest in “Japanese manga and Robotech and giant mecha type stuff.” Domino was working with Automator at the time and suggested he team up with Del: “Dan was down, gave me a few beats on a cassette tape, they was all tight, and I think ‘Virus’ was the first song we did.”

Backing up verses packed with what Del calls “robotic futuristic references,” Automator’s production elevates Deltron 3030 into essential territory: There’s a breakbeat basis to his compositions, which are topped with cinematic, sweeping strings and orchestral flourishes that bring to mind a grand space opera. “Dan’s a violinist so he knows music and how to compose for real,” says Del. “He uses live instrumentation but it’s still formed from a sample.”

When Canadian mixtape maestro Chong Wizard had the idea to put together a tribute to A Tribe Called Quest, he called Del and asked if he wanted to be involved. “I picked ‘Lyrics To Go’ as that’s one of my favorite Tribe songs ever,” recalls Del. “I’m a huge Tribe fan, I know Q-Tip, he was a big influence on me, so I knew that song well enough to take that flow and use it. That was hella fun for me just to be able to rap like that.”

This updated version of “Lyrics To Go” is underscored by a tweaked beat from the producer Bidimridim, and Del expertly replicates Tip and Phife’s cadences from the original while adding new lyrics. It turns out Del’s rhymes were actually meant to be something of an apology. “Me and Tip kinda kinda drifted away and there was times when I thought I offended him,” Del confesses. “One of the times I was at his birthday party and I got so wasted, like dumb wasted, I’m rolling down the steps out into traffic somewhere and Dres and Molecules [from The Legion] swooped me up before some cars hit me. Damn, I fucked up his whole shit! Tip said he wasn’t tripping, but from what people were saying, he was tripping, and I never really forgave myself for that. So on this song I was trying to connect to him and let him know it’s all good.” Asked if Tip’s heard his apology rap, Del pauses then sounds uncertain: “Maybe!”

Recorded in tandem with producer Amp Live, who also makes up one half of the Bay Area hip-hop group Zion I, 2018’s GATE 13 is all about futuristic funk beats that boast a bewitching range of influences: “Wheel Of Fortune” starts out with clipped drums and spacey synth riffs before dipping into a dub-inspired midsection; the abrasive rhythms of “Run Free” bring to mind N.W.A.’s sonic onslaught; closing cut “Lateral Thinking” is a beguiling mix of wobble bass and dreamy ambient keys. Over this shapeshifting production, Del airs out a series of verses that, he says, channel a new style of “being more minimalistic in my approach.”

After recording GATE 13, and discovering the chemistry between himself and Amp Live, Del teases they might team up to form a full-on live band. “Me and him are both pretty good musicians so we’ve been testing the waters to see how it would work,” he says. “I’ve got a vision on how we can become a band because I wanna be able to go on the road and play stuff and not just have to be on stage rapping all the time.”