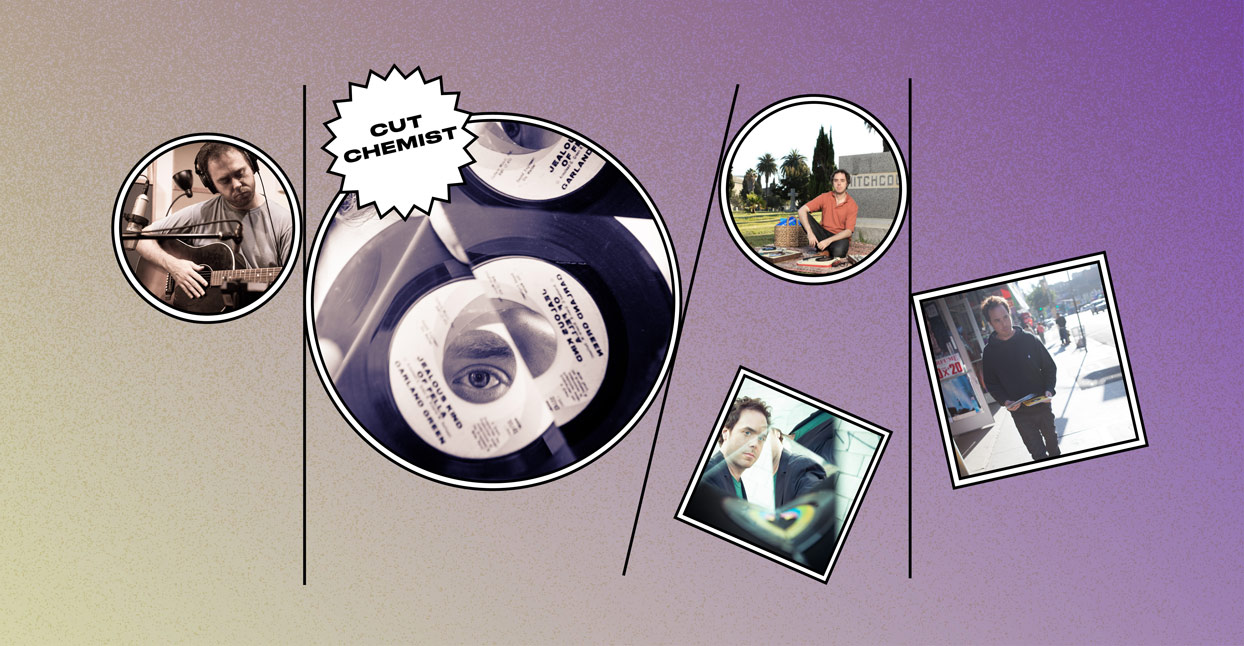 “The first record I ever came across was the Star Wars soundtrack, which my parents gave me in 1977,” says Cut Chemist, the Los Angeles-based hip-hop producer, renowned DJ, and record collector. “I guess that started me on my journey right there,” he says.

After becoming smitten with vinyl records as a kid, Cut Chemist eventually graduated to becoming a key part of the grassroots Los Angeles indie hip-hop scene of the mid ‘90s. As a producer, he crafted funky, breakbeat-heavy tracks for the group Jurassic 5, whose ensemble cast of MCs invoked comparisons to the harmonized rap styles of old-school crews like the Cold Crush Brothers and the Furious Five. He also branched out to join the Latin funk crew Ozomatli, whose songs earned critical acclaim for their infectious melange of hip-hop, salsa, jazz, and funk.

Beyond his roles in Jurassic 5 and Ozomatli, Cut Chemist has built a sterling reputation as one of the savviest DJs and record collectors around—and his solo projects and mixes speak to his crate-digging instincts. His endless hunt for down untapped sample sources and fresh micro-genres has resulted in a discography that spotlights Ethiopian jazz, offers soulful disco retrospectives, and delivers compilations of overlooked post-punk French synth groups.

Here’s Cut Chemist’s guide to the deepest globe-trotting and genre-hopping releases in his Bandcamp vault.

Sound Of The Police

2010’s Sound Of The Police followed Cut Chemist’s The Hard Sell live mix collaboration with fellow hip-hop producer and crate-digger DJ Shadow, which the duo performed by spinning 45s on eight turntables and a loop pedal. “I wanted to do something that was the opposite of that, so just one turntable and a loop pedal,” he explains. “I wanted it to be really minimal.”

After he was approached to perform a set before Ethiopian jazz artist Mulatu Astatke‘s inaugural Los Angeles live show, Chemist had the idea to use Ethiopian tracks to form the core of the mix. From there, he branched out to include, “Afro-Latin music and straight African music inspired from other places around the world—like Nico Gomez who is European but whose music has Latin and African influences—plus also some Colombian and Nigerian records.” The title of the project refers to the way many Ethiopian bands used to be comprised of military and police personnel, along with a nod to KRS-One’s classic anti-police brutality rap anthem “Sound Of Da Police.”

Split into “East” and “West” sides, the project is brimming with fiery and radiant Ethiopian jazz and funk, which Chemist deftly stitches together by stacking samples on top of each other. He calls Sound Of The Police, “the hardest mix I’ve ever done,” adding, “Each of the 20 times I’ve performed it, I’ve warned the crowd to expect some sort of exclusive fuck-up. People are always excited to see this balancing act and see where I might mess up and it would be imperfect—which is part of a mix’s charm.”

Disco Is Dead came to life when Cut Chemist was asked to spin a set at a screening of the iconic disco movie Saturday Night Fever at Los Angeles’s Hollywood Forever Cemetery, an event organized by Cinespia. A longtime fan of the John Travolta flick—which he originally saw at a drive-in with his parents—Cut Chemist spent several weeks sourcing and sequencing a retrospective focused on soulful disco cuts. The nearly 52-minute playlist kicks off with songs by Claudja Barry, Donna Summer, and Barry White’s Love Unlimited Orchestra, runs through jazz- and funk-influenced tracks by Roy Ayers and the Salsoul Orchestra, and climaxes with a Michael Jackson dancefloor filler.

“They said it was the best one they’d had, because everyone really danced,” Cut Chemist says. “People brought their dancing shoes—it was quite a party in the cemetery.” To date, it’s his most played mix.

The project’s title is a pun on the location of the set, but he says that disco’s popularity started to fade because of “just a natural progression of the trends in music.” He cites Chic’s 1979 “Good Times” as a watershed moment: “Things turned into something a little more mid-tempo and four-on-the-floor, and things also turned into Cameo and P-funk rather than Moroder and Donna Summer. Plus, hip-hop was coming into the fold.”

In 2004, Cut Chemist traveled to Italy for a Red Bull Music Academy event. He went to see a record dealer in Milan, and began searching for his usual sample sources—library records and European funk tracks. When the dealer recommended something that “looked like an ’80s record,” Cut Chemist gave it a spin and came across a song titled “Megamix” by the French synth group Vox Populi!, which he describes as “sample-based post-punk, with psychedelic elements and drum machines.”

Cut Chemist wound up sampling “Megamix” on his first studio album, The Audience’s Listening, and contacted Vox Populi! via MySpace to see if they had any more music they could send him. The relationship resulted in the release of this 2013 compilation.

The 20 tracks are defined by stripped-down electronic production that allows the experimental synth work to take center stage: The eerie “Chair Morte” hums like a power station; “Funk Off” is all cascading riffs that sound like they escaped from an ‘80s video game; and “Ma Douce Ami” employs meditative squelching effects like some sort of lost ambient acid house record.

“I would consider Lesson 6 to be my Beethoven’s 9th,” says Cut Chemist. The epic song took him two years to construct, and was originally released back in the mid ‘90s. It’s an intricately crafted audio document in the lineage of Double Dee & Steinski’s pioneering series of cut-and-paste productions, but built around snatches of sampled dialogue that sound lifted from instructional science lessons and music theory reports. (“Do you think that Led Zeppelin and Frank Sinatra would go together,” asks a voice at one point.) The coarse and funky beats and breaks that underscore the footage constantly shift and morph, and tonal changes are prompted by sharp cuts and scratches.

“Making it was something experimental, something where I could be completely myself,” recalls Cut Chemist. “It was my little late night jam session, away from the Jurassic 5 stuff I was working on at the time. I wanted to try new things using music theory—like time signature changes, which nobody was really doing in the DJ world like that. It’s wild. I always hear engineers and musicians telling me it’s this great journey.”

When Cut Chemist released a remastered version of “Lesson 6” in 2016 to celebrate the song’s 20th year anniversary, he also included a 15-minute series of sonic sketches that showcase experimental off-cuts and ideas that never made it into the finished track. “It’s just an entire side of a tape of me trying things, raw footage if you will,” he says. “It’s a peek inside the time capsule of putting together the song.”

After unearthing a series of gems on a record-shopping jaunt to Colombia, Cut Chemist teamed up with his assistant, Mike Styles, and decided that an innovative way to share his love of the country’s sounds would be via a remix project. “I wanted to get some of these global up-and-coming producers to remix some of this stuff, ‘cause I just wanted to hear it in that context,” he says. The range of remix styles run from Co. Fee’s boom-bap-boosted hip-hop flip of Los Corraleros de Majagual’s “La Burrita de Eliseo,” to Atropolis’s hazy deconstruction of Julio y su Combo’s “Lamento Cumbiambero,” to Barcelona-based Los Chicos Altos infusion of smoky dub vibes into Los Hermanos Tuiran’s “Lluvia.” “The El Dusty remix of ‘Mi Chola’ dismantles the song to where you can’t recognize its source material, but then Dance Kill Move’s ‘Ritmo Sabroso’ just very tastefully adds frequencies to the song,” he says, describing the wide array of approaches represented by the collection.

Cut Chemist wanted to reinvent himself on his 2018 sophomore album Die Cut. Working with an expanded roster of collaborators—including drummer Deantoni Parks, singer Laura Darlington, the synth sounds of Vox Populi!, and MC foils Edan, Chali 2Na, and Myka 9—Chemist used the project as a way to hone his skills as a songwriter.

The tenor of the album reflects its ensemble guestlist: “Die Cut (Theme)” boasts furious drum & bass rhythms commandeered by Parks; “Home Away” uses Darlington’s breathy vocals to steer the song in a moody new wave direction; and inimitable golden age hip-hop icon Biz Markie shows up on the playful “Moonlightin’ With Biz,” which is as charming as the soundtrack to a trippy ‘70s cartoon.

“I’ve known Biz for a long time, and we’d meet up and go record shopping and finish up at the house with a freestyle and just mess about,” says Cut Chemist. The song sums up the collaborative ethos of the whole album. “I was playing him beats and he said, ‘If you sample this little snippet here and make that the song, I’ll rap over it.’ So he had a hand in producing the song, and he freestyled the whole thing, one take. That’s just how it is with Biz.”