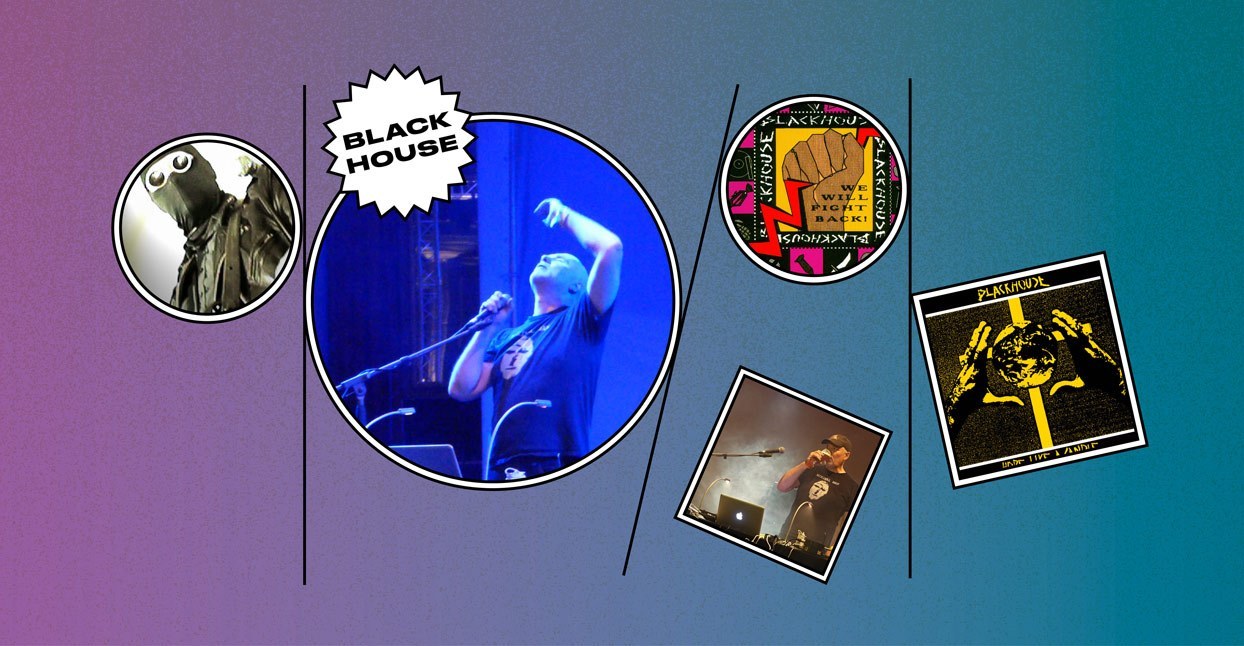 “I saw Jesus’s face,” says Brian Ladd of pioneering industrial/power electronics project Blackhouse, recounting an event from his early life in church. He was five years old and bored, when he thought he saw a familiar face in a high window. “I tugged on my dad’s sleeve, and said ‘Hey, I see Jesus up there! I saw Jesus.’ And he said, ‘Oh man, they just do that to fool kids. They have somebody up there with a big picture of Jesus,’ as if it were some kind of joke or a put-on. My dad told me that because he thought I was probably nuts.” Ladd backed away from religion at a young age, but as he matured into a young man able to think for himself, he became more convinced that he had seen the real face of Jesus Christ.

At 18, another event spurred his conviction. “I was partying with my friends at our apartment in Champaign, Illinois,” he says, “and I heard some banging at the back door. I went and looked. Some guy was trying to break in, twisting the door handle trying to get in. I kicked his arm, and he backed up and shot twice. It hit me in the stomach. There was no blood. I put my hand down there. I got walloped, and there were welts down there. The cops came and they found the casings and said that they were defective bullets. The guy goes ‘The Lord has saved your life. You should do something with your life.’”

Amidst all of Ladd’s religious underpinnings, he had another love—industrial music. Whitehouse, SPK, Throbbing Gristle, the usual suspects. He noticed that Whitehouse, and other projects with shocking visuals and lyrics were getting pushback for that imagery, but he thought he would up the ante. “I thought what would be even more offensive was a Jesus band,” he says, “especially when it sounded like hardcore noise, so I was getting back at the scene for all the terrorists and stuff that they put on those record covers, the naked dead people, the Holocaust camps—the negative imagery—I wanted it to be a positive thing, being a Jesus industrial artist. So I created Blackhouse.”

Talking to Ladd is like checking boxes from a list on the industrial culture credibility rubric. Blackhouse’s early catalog was unequivocally influential, and he’s got the CV to boot with records and cassettes released through RRR, Steinklang, Staalplaat, Le Syndicat, and his own Ladd-Frith label, which featured contributions from Minimal Man, The Haters, Vox Populi!, The Gerogerigegege, Controlled Bleeding—the list goes for days. He also ran the zine Objekt and reviewed experimental records from around the world, and played in the abrasive electro-rock project Psyclones.

We looked through the discography of one of industrial music’s most enigmatic producers, and spoke with Ladd about noise, faith, and what happens five minutes after you die.

Originally released in 1984, Pro-Life is the first Blackhouse release and it’s the album that most overtly references and even mimics Whitehouse (if it isn’t obvious by now, that’s the band that inspired the name Blackhouse). Ladd’s trademark rhythm box isn’t used on Pro-Life—instead, he utilizes crashing waves of feedback and screeched vocals, just like William Bennett of Whitehouse did. “I originally made the first tape and sent it out,” Ladd says, “not letting people know it was me, and everyone said ‘This is great,’ even William Bennett, so I decided to keep going, but switched from noise to rhythm box-based stuff.” Pro-Life is the most abrasive Blackhouse record, and the most noise-centric. It was originally self-released on cassette, but Le Syndicat from France did a cassette run as well. Later on, the record got the deluxe reissue treatment from Steinklang Industries.

Hope Like A Candle came out only a handful of months after Pro-Life but was already a huge leap forward, featuring heavy beats and vocals that run the gamut from screeches to incantations. Tracks from Pro-Life and Hope Like A Candle were hand-selected by Ron Lessard of RRRecords for Blackhouse’s vinyl debut, Hope. Though an early vinyl release, Lessard and Ladd conspired to give the catalog number RRR 777. An elaborate release, Hope was created by hand—Lessard and Ladd each spray-painted and collaged to create the album’s visuals. Amazingly, Hope Like A Candle was also a study in streamlined creation. “I took the tape recorder and would do a song,” Ladd says. “Eventually I’d hit pause, then change the rhythm boxes, and record more. So they’re all connected. The whole album Hope Like A Candle was finished in an hour. Straight shot right through. Stream of consciousness.”

Five Minutes After I Die

“Where will my spirit be five minutes after I die?” Ladd whispers on the album’s title track, a creeping, subdued dirge that stands out as an evocative, atmospheric number in the Blackhouse discography. Five Minutes After I Die is an exercise in serendipity. “When I first moved into the house I still live in,” Ladd says, “there was a thing on the door from Jehovah’s Witnesses, and they wrapped it around the doorknob with a big card. It showed a picture of crying Jesus—that’s what I used for the cover of Five Minutes After I Die. It had words like, ‘Oh marvelous grace that has rescued me, oh joyous moment when Jesus I see, oh happy day when like Him I’ll be. Five minutes after I die.’ Little poems. I thought, ‘Damn, this is meant for me. It’s perfect. It was on my door! Somebody delivered these lyrics to me.’”

The second Blackhouse LP on RRRecords, Holy War was a co-release with RRR and Ladd-Frith. Ladd released the cassette version and Lessard put out the LP—this time, the art was not handmade. There’s overt musicality and influence from both hip-hop and the Wax Trax catalog on Holy War. The album’s rhythmic element is more complex than previous releases, occasionally veering close to techno. On the album’s opener “Make A Choice,” guitars and basslines are prominent, and feature repetitive motifs, providing a backdrop to Ladd’s wails. Unlike the previous album Five Minutes After I Die, Ladd wrote all the lyrics for Holy War, and although Ladd’s delivery loses some of the hymnal qualities of previous albums, songs like “Satan + His Demons” do feature choral components.

We Will Fight Back!

A step further into EBM, We Will Fight Back! was originally released on the influential Staalplaat label. Ladd was contacted by Staalplaat to submit a record this time around, rather than having a record he was shopping to labels. “Not all of that material got on that record,” he says, “and the rest became Stairway to Heaven.” The original cover, which is not visible on Bandcamp, featured the shocking image of a crucified rabbit. “I didn’t know they were going to do the cover like that,” he explains. “They just told me they had some pictures, and told me I’d love it. Then I got the record cover and thought, ‘Aw man, Christians are gonna hate this record! I’m screwed!’” We Will Fight Back! is a marked step up in terms of production for Blackhouse’s early work, but also takes a deeper dive into melody, featuring guitar chords and even sung melodies, like on the industrial dance number “Totally Gone.”