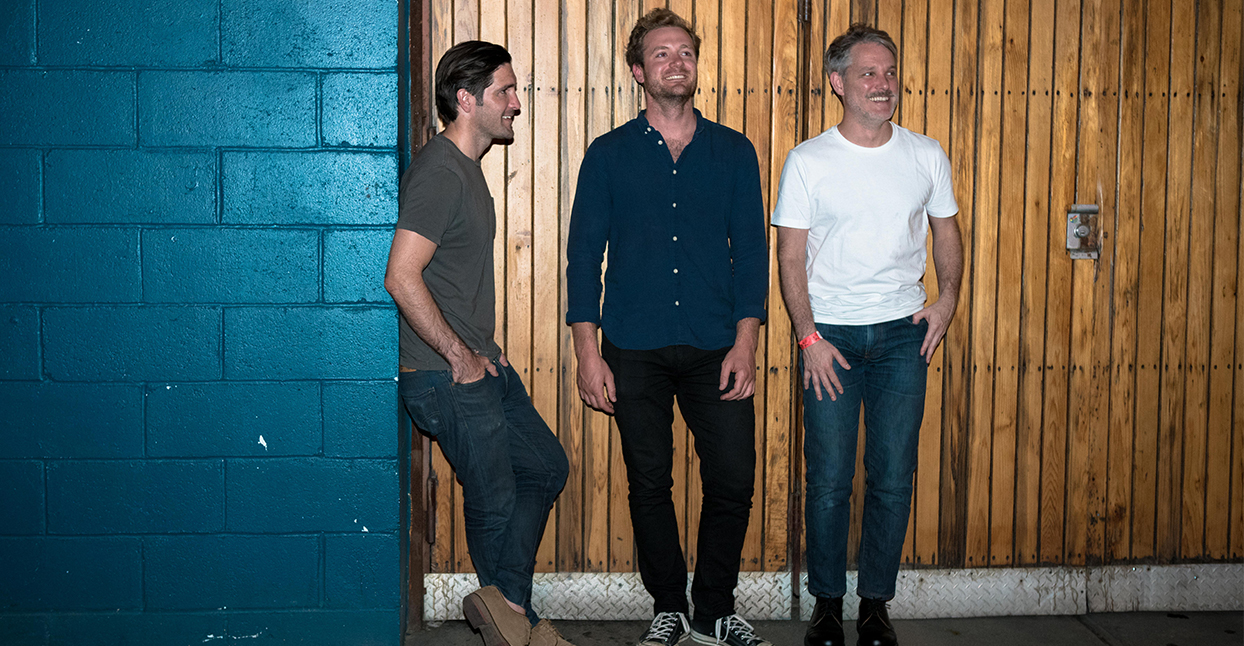 The first thing you’ll notice when you walk into Wharf Cat Records’ office in Greenpoint, Brooklyn, NY is that it feels like a home. That’s because it is one: the old stairs lead directly into a railroad apartment where one of the co-founders, Doug Warner, resides. It’s a clean space, flowers lining the stoop. Inside, there’s an intimate living room, a bright kitchen. A large grey cat hops from table to table. Posters of artists—on the Wharf Cat roster, and off—crowd the walls.

Wharf Cat’s presence makes sense here—the community-oriented art-punk label is dedicated to releasing music that’s both defined by and transcends the current moment. The men behind the label, brothers Doug and Trip Warner and their pal Leland Drake, couldn’t care less about trends. That mindset is working. With the recent success of New York post-punks Wall (now on the third pressing of their debut EP) and the increasing critical attention paid to Ukraine’s Bichkraft, their roster is quickly generating buzz around the city and beyond.

We sat down with the trio to discuss the label’s origins, and to hear about some of the releases that sparked their growth.

How did Wharf Cat start?

Trip: It started as an art project with the artist Sam Falls [in 2011]. We were pretty obsessed with bands from Florida, all of them surrounding the band Merchandise—Dads, Cult Ritual, Neon Blud. We really wanted to pair Sam’s art with releases by some of those artists, and it just went from there. Our second release ever was Dads’ “Bubular Tubes” 7”. It sold out really quickly and sparked up more stuff.

It seems like some of your newer releases are New York-focused.

Trip: One thing we try to be is globally diverse. We have [the] Kiev band, Bichkraft, from the Ukraine. We work with Trust Punks, who are from Auckland, New Zealand and Sydney.

Doug: What happened was everyone from Florida moved to New York.

There isn’t a specific ‘Wharf Cat sound,’ but there tend to be aesthetic similarities in your artists. Is that intentional?

Doug: It’s a combination of both. I always respect other labels who know what they like, and are able to do what they do without getting pigeonholed or painting themselves in a corner. We just don’t want to have one sound.

Leyland: We’re hands-on with the visual [aesthetic] aspect. One thing we do with all of our releases is make sure there are no words on the cover. It’s always a fun obstacle to overcome.

Tripp: That was a huge cult hit. For all of the bands that we work with, it was a really formative 7”. We even did a reissue. It’s still one of our biggest sellers. It’s just a perfect song. It’s one of those songs you can just listen to over and over and over again.

Doug: Back to Florida! Tampa-via-Providence.
Tripp: We met them because we were working with the Ukiah Drag guys. That album came together really quickly—the artwork is amazing. The guy who did the art goes by the name of Sultan. It’s just a great punk record.

Doug: Ancient Sky was a band we used to see play live. We were good friends with them. We did a 7” and a record with them, All Get Out. They toured Europe on that record. I think Mosaic was a reaction to All Get Out, because they were one of my favorite bands to see live in Brooklyn—really tight and really heavy. All Get Out was cool, and more experimental. They took some production risks. Mosaic was an attempt to capture their live sound. We recorded it in a church in Hudson, New York with Ben Greenberg (The Men, Uniform). It’s a really heavy record.

Leland: That was a band Trip, Doug, and I were obsessed with for years. We always thought of them as very unapproachable until we reached out to them and realized they’re the sweetest guys. Austin’s [Sley Julian of the band] father recorded the entire record.
Trip: They’re the best live band in New York.

Trip: We’re friends with Austin [Brown] from Parquet Courts, who recorded the 7”. Before the [Wall] EP was mixed, he sent us a copy of it, and we were enamored very quickly. We met with them as quickly as we could and made a plan. We just hit it off. We just repressed it for the third time.

Trip: I saw them at Silent Barn [in Brooklyn] and they just ripped this incredible set. They toured with Cottaging and Naomi Punk, Nu Sensae, bands we loved. We had a lot of friends in common, and then they recorded this amazing record which hits as hard as a hardcore record but is still really textural. The songs are really brilliant.

Trip: We all love their last album, Discipline. They’re a great band from New Zealand.

Leland: They sent us a demo and we sat on it for like a month. We finally listened to it and it was unbelievable.
Doug: I think Le was the first to say, ‘This is really cool.’ I was like ‘I’ve been thinking that since I listened to it.’ I have to say it’s one of my favorite records we ever put out.