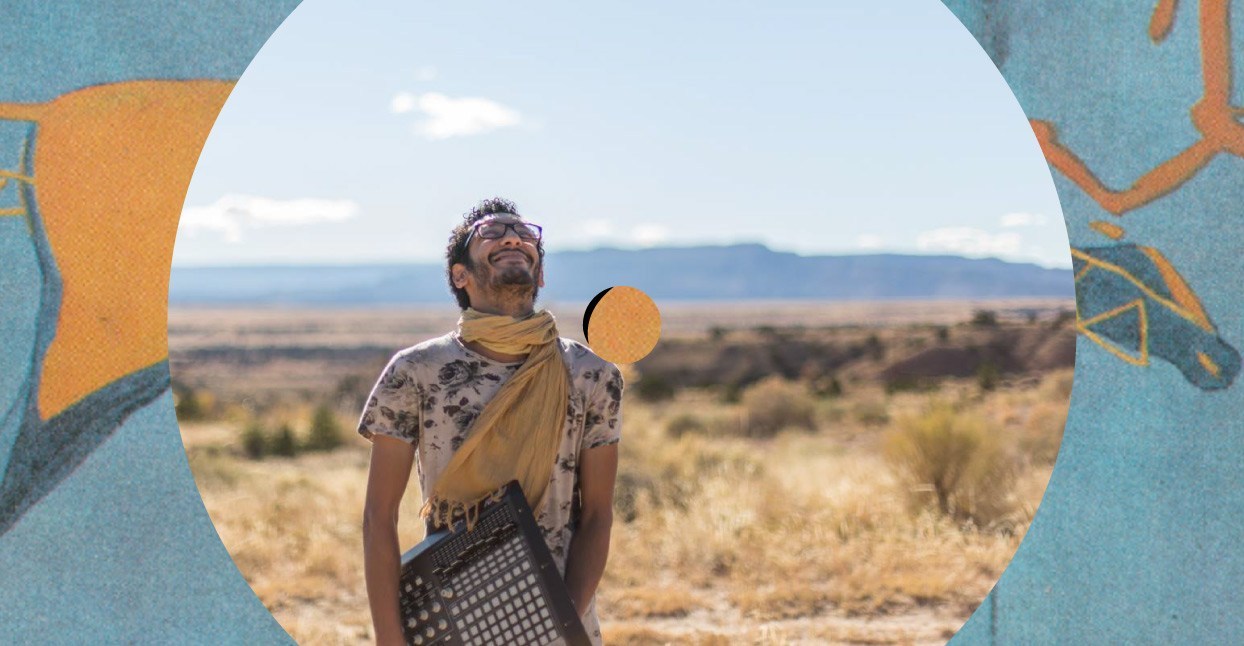 The label Unexplained Sounds Group is dedicated to mapping the breadth and depth of experimental music from around the world. The label specializes in compilations of electroacoustic, ambient, noise, and contemporary composition from Europe, the Middle East, and beyond. Its rapidly expanding catalog offers an education in, and an introduction to, a global network of aural disorientation.

Raffaele Pezzella, the Italian founder of Unexplained Sounds, discovered experimental music in the 1990s, when he was in his early 20s. “Pink Floyd’s Ummagumma was one of the albums responsible for that shift in listening to music,” he says. From there he started exploring Brian Eno, John Hassel, and Terry Riley. “A completely different universe opened up before me… a revolution in my mind,” he says.

After graduating from college, Pezzella began working as a sound technician‚ a career choice further evincing his growing obsession with experimental music history. Before long, the man was forging friendships and swapping songs with fellow fans of the genre from around the world, via social media sites like Facebook. Some of these new friends encouraged Pezzella to create a label that would highlight the Italian musicians he was promoting; thus, Unexplained Sounds was born.

“I have an insane curiosity for everything challenging in terms of aesthetic innovation,” Pezzella says. His curiosity has metastasized into a strikingly extensive catalog. Since Unexplained Sounds began in 2014, Pezzella has put out more than 50 albums. The list below highlights some of the most interesting and exciting releases.

In addition to owning the label, Pezzella makes music himself; accordingly, his label has released several of his own albums, under the name Sonologyst, including one 2016 release called—just like the label—Unexplained Sounds. Pezzella took sounds without clear origin from VHS tapes, cassettes, and YouTube videos, collecting what he refers to as “strange noises and sounds that science still can’t explain.” Next, he amplified and manipulated these otherworldly findings to create the eldritch final product: an unsettling swath of ambient soundscapes. “Unknown Sound in Finland” highlights a strobing, scratching echo, while “Mermaid” records a distant elephantine bellowing, framed by hiss and static. The album doubles as a wry commentary on Pezzella’s own dedication to exploration; across these tracks, he brings back noises from as far away as Canada or Andromeda to amaze as well as provoke.

Pezzella’s initial idea for Unexplained Sounds was to release “reports of the current year of music production in a specific country. It was like a magazine made of music instead of reviews.” The label’s first album was a 2015 survey of Italian experimental music, drawing on Pezzella’s own knowledge of his country’s musical output. Alessandro Rizzo’s “Introspection – An Intimate Journey,” a clattery, bubbling electronic track that inhabits the border between psychedelia and noise, is one standout. Another is A.B.D.’s “Reminiscenza,” a wonderfully odd, six-minute feat of low-end muttering that sounds like a group of monks partaking in plainsong as they drown in the abbey basement.

After doing a number of one-year country surveys, Pezzella started plotting more ambitious projects. “I try to have a wider perspective in time and space,” Pezzella says of these new compilations, “and focus much more on the connection between the new music and the folk tradition.”

The first of Unexplained Sounds’ broader surveys was a 2016 collection of ambient primitivism from Russia in the 2000s. Many of the comp’s songs unfold as spiritual explorations, shaping the listening experience into one of unified meditation. The opening track sets the reverent tone: the remarkable 2004 composition “A Sound,” penned by Artemiy Artemiev (son of Tarkovsky soundtrack composer Edward Artemiev), features a commanding performance from Polish overtone singer Mirosław Rajkowski.

“It was completely clear to me that in Tehran there was a very creative scene of experimental musicians, working on electroacoustic improvisation, dark ambient, [and] drone music. But they were almost unknown to the Western audience,” Pezzella says. It’s very difficult for Iranian musicians to get their work before the public; Pezzella even had to tweak the title of the anthology, because PayPal blocked some payments for the music when it was clearly labeled as Iranian.

Visions of Darkness is, as Pezzella says, mostly focused on dark ambient and drone. Within that, though, there’s a range of approaches, from the delicate keyboard New Age-y improvisations of Limen, aka Nariman Aliakbar, on “Wherefore the Worm Universe,” to the eerily repetitive post-rock of “(For a Film)” by Crows in the Rain.

Unexplained Sounds’ Russian and Iranian anthologies were organized around fairly coherent genres. This 2018 exploration of Beirut’s experimental music scene is in contrast wildly diverse, showcasing the city’s cosmopolitanism. Tony Elieh’s “It’s good to die every now and then” is a spiky, driving composition, with Steve Reich and Sonic Youth clear references for its pulse and squall. Charbel Haber’s “We Dream in the Sun, We Tan When We Can” skews romantic and lyrical, with strings that link it to classical Western composition. Joseph Doumet’s “Collage 1” is, as the title suggests, a collage of gentle banging and mild synth pulses with obvious tape-edit cuts.

Pezzella is extremely, and justifiably, proud of his latest project, a sweeping collection of contemporary music from Africa. “Of course, it doesn’t pretend to be exhaustive of the entire spectrum of new musicians from Africa,” Pezzella points out. “But I think the compilation offers a very exciting miscellany of sonic currents.” Cairo’s FRKTL starts the collection off with the dreamy ambient retro-synth IDM of “Hverfa af himni heiðar stjörnur.” Other highlights include Egyptian singer/composer Ahmed Saleh’s mixture of traditional sinuous Arabic flute and electronic throb, Algerian musician Eryck Abecassis’s abstract, scratchy guitar experiments, and Moroccan producer Abdellah M. Hassak’s “Yearnings Complacency,” which features the traditional Arab singing of Aziz Nadif.

While it’s obviously best known for its nationally focused compilations, Unexplained Sounds has a range of other releases in its catalog as well—experimental, ambient, and electronic single-artist releases, or thematic compilations like this one. Analog 2020, from 2016, is an anthology of experimental work created entirely by acoustic instruments. Ambient aficionados will enjoy the music on its own merits, but it’s also great fun to try to imagine what sort of non-electronic contraptions could possibly have generated the distorted gurgles on Robert Rich’s “Particles” or the shimmering drones of Jonatan Liljedahl’s “0133A12C-2.”

Spanish musicians Andrés Alonso, Iván Cebrián, Coco Moya, and Jaime Munárriz created this marvelous album of improvised electronic psychedelia. The music is loose without being formless, with a sense of narrative and progression reminiscent of the group that started Pezzelle’s journey, Pink Floyd.