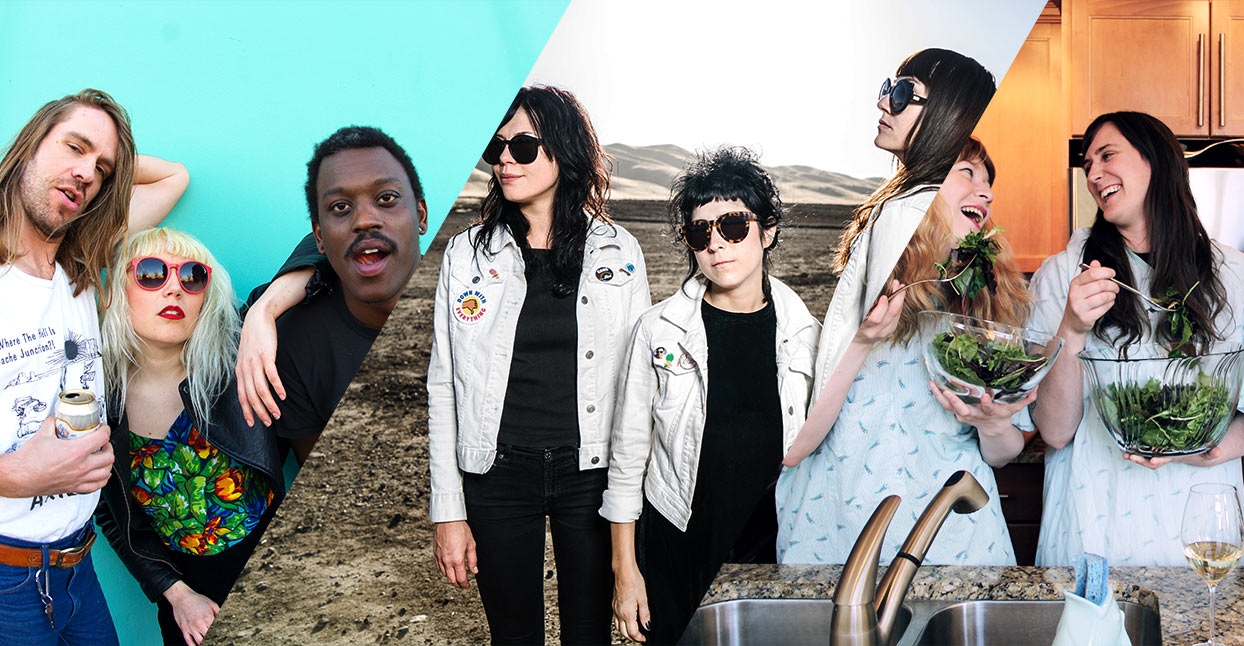 To loosely paraphrase one of the more well-known passages of the Bible, it is easier for a camel to walk through the eye of a needle than for an introvert to start a successful record label. That’s what David Dickenson was up against when he founded Suicide Squeeze in Seattle two decades ago. “If I could go back 20 years and give myself a piece of advice, it would be to learn to have a regular conversation without feeling stressed out of my mind all the time,” he laughs. “For example: I loved Elliott Smith well before I started the label, and I wanted to ask him to do a single. But I was so into his music that I couldn’t bring myself to ask him. I was way too nervous. Eventually, my wife was like, ‘Do you just want me to ask him?’ And she did, and he said ‘Yes,’ and that’s how the ‘Division Day’ 7″ came about.”

That single came early in the label’s lifespan—their fifth release after successful 7″s from Modest Mouse and 764-Hero—but it helped chart a course for the label’s early days. It was an artist Dickenson was passionate about who, like Modest Mouse and 764-Hero, was geographically local and whose music felt distinct and personal. Over the course of the last two decades the label has moved past its Pacific Northwest focus, but the artists on its roster are still defined by their distinct musical sensibilities. They may operate in loosely familiar genres—post-punk, post-rock, surf, and pop—but all of them approach their music slantwise, loading them with unlikely left turns. And while Dickenson is celebrating the anniversary with a spate of reissues, and even a Suicide Squeeze-branded IPA from Fort George Brewery, in the end, his focus has never been on building a brand. “To me, it’s not about Suicide Squeeze,” he says, “It’s about the bands. You want people to respect what you’re doing as a label, but to me, I’d be just as satisfied to know that people are digging the bands.”

With that in mind, we asked Dickenson to talk through some of the releases that have defined the label’s history to date.

The first time I saw The Coathangers play live wasn’t until after we’d decided to do a 7″ for them, which was for “Shake Shake.” A friend of mine turned me on to them—this was during the MySpace days. So I hit them up over MySpace and asked if they wanted to do a 7″ for us. I didn’t hear from them, so a week or two later, I sent them a follow-up message and we talked on the phone. A couple of years later they told me that the reason they didn’t get back to me at first was because they thought my MySpace message was a joke. The Coathangers came at a time where I felt like I was dealing with a lot of managers and business-type stuff, and I was looking for a band that wanted to do something purely for the love of music. I’m just happy I was able to meet them, and we were able to work with them. To see the growth in their songwriting and live performances with each album has been incredible. And to have this record come out during our 20th year, and for it to be the first time they made the Billboard Top 200 and the first time they got late night TV—it feels like a ‘proud dad’ moment.

Minus the Bear, Menos el Oso

This was a turning-point record for the band. It’s our best-selling record to date. It also features “Pachuca Sunrise,” which is the best selling track in the band’s catalog. It’s just a massive record for me. A lot of the great stuff that came to the band—this record is opened a lot of doors for them, and also was just another sign of continued growth for the label in general. The period from Menos El Oso to Planet of Ice was just an exciting time for me. The band had management, everyone expected big things from the record—including me. We were growing at the same time the band was growing, in terms of what we were learning, and starting to understand what was expected of us. It got to a point where the size of the band eclipsed the size of the label. We were hand-in-hand up through Planet of Ice. When they left us for Dangerbird Records, that’s when I took a step back and started thinking, ‘What made this exciting from the beginning?’ And the answer was, ‘Finding bands that are just starting out—younger folks that are hard working and want to do whatever they can, because they love music.’

This Will Destroy You, Another Language

This Will Destroy You had a moment where two of their members decided they were gonna step away from the band, so [founding members] Jeremy [Galindo] and Chris [King] were figuring out what their next move was gonna be. It came at a time that was pretty dark for them on a personal level. They were added to our SXSW showcase, and that’s when I became a fan. It got me thinking, ‘These guys haven’t done anything in a while. I wonder what the deal is?’ So I sent them an email, and their manager said, ‘Crazy timing, the band just finished recording an album’—which is what would become Tunnel Blanket—‘and we’re getting ready to send it around to labels.’ I liked the music, I thought it was an amazing album, and I also felt like it was gonna be a tough one for a lot of their fans to wrap their heads around, because it was quite a departure from the bright, melodic stuff that they had done on the earlier releases. It was heavier, darker material. But I loved it and I wanted to release it, regardless. Another Language was the perfect combination of their earlier stuff and Tunnel Blanket, and I felt like people really picked it up right out of the gate. With this album, they started playing bigger rooms, and were able to sell them out. That was really nice growth for them as a band.

VHS are our latest signing, and I’ve known about them since they started playing music. It was one of those things where I was hearing the demos and the early cassette and 7″ releases, and I thought that the stuff was cool, but it didn’t grab me in a way that made me want to step in and try to release it. It wasn’t until I heard these songs, the demos for what would become the album, that I got really excited about what they were doing and the progress they’d made. The process came together fairly quickly—sometimes when you’re working with a band that’s brand new, it’s gonna be a tough road to hoe. I think that these guys deserve to be heard. I think that if people actually take the time to sit down and listen to the record, there’s a lot here to like. They put on a fantastic live show, too. There are so many records coming out, there’s so much great music out there and, unfortunately, you don’t always get the time to hear it right away. And that’s where a band like VHS suffers. They weren’t a ‘buzz band’ coming with all of this blog hype. It’s just some people that were working hard in their basement, making music, playing local shows, and trying to hone their craft.

When the Aislers Set did their West Coast tour to celebrate the anniversary of the band, we had Childbirth open for them. We were kind of keeping an eye on them—from a label perspective, but also as fans. So when we heard that they were working on new material, we hit them up and asked them if they wanted to get together. Shortly after that, we decided to work together, and they went into the studio to record this album. They’re some of the sharpest people around, and they’re funny as all get out. Sometimes I just sit back and listen to them interact with each other, and it’s hilarious. It’s like watching TV. They’re just great people, and this is a record that I’m proud to have on the label.

For Guantanamo Baywatch, they’re a band that needs to be seen live. I love their first record, but you really need to have seen the band live and be into what they’re doing to want to throw that on the turntable. Whereas with this record, Darling It’s Too Late, they made massive strides. They didn’t want to release a polished ‘radio record,’ but the songs are definitely cleaned up a bit, which makes it easier for people to understand what they’re trying to get across. I’ve just been proud of the way the band’s grown, and what hard workers they are.

I’ve had a working relationship with Michael [Nau] and Whitney [McGraw] dating back to [their band] Page France. Paranoid Cocoon is one of my favorite releases they’ve done together. It has some of my favorite tracks of theirs on it, and so I wanted to include it in this list. I feel like the Bandcamp fans have been really interested in all of their projects, whether it be Page France or Cotton Jones. For me, regardless of that, I wanted to showcase the fact that this is an artist we started working with when they were just out of high school. It’s neat for me to see them grow as a couple, to see them get married and have kids and for the label to be able to be there throughout a lot of those life-changing experiences.