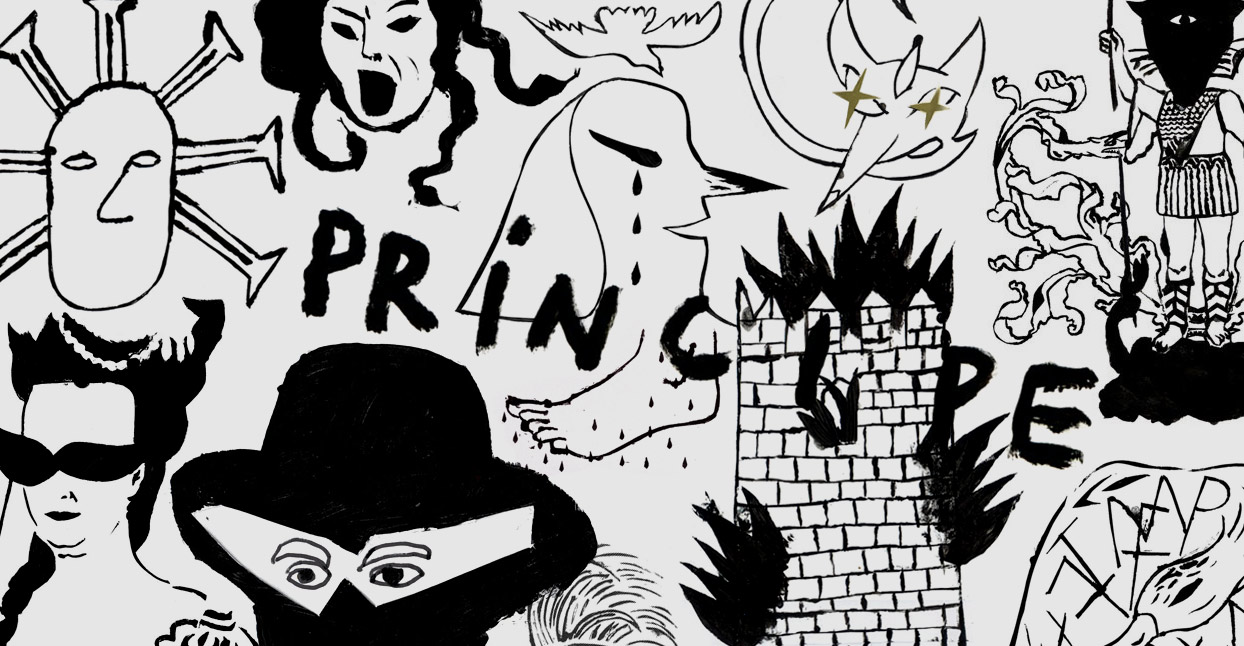 A collage of Principe Records graphics from album covers and posters.

“It started off as a diverse genre—if I can even call it a genre.” Jose Moura, one-quarter of the brains behind Lisbon’s Príncipe, is trying to define the music his label has spent the last five years introducing to the world.

“The producers we work with are divided between three styles. You have Batida, which is a simple word meaning ‘beat.’ Batida is usually fast, around 140 bpm. It’s the instrumental version of the Angolan vocal style Kuduro. The other big, recognizable sound is Tarraxo; that’s a nervy, darker version of a hugely popular African style called Kizomba, which is a slow, mainstream sound for dancing. Kizomba is brighter, happier, and blatantly romantic—it’s a bit like zouk, which was really commercially popular in the ’80s. Tarraxo started off close to Kizomba, but is getting increasingly dark and synthetic. There’s a third sound rising—afro house—and I’d say that Batida is losing a bit of ground to Tarraxo and afro house.”

The producers Moura is talking about are first and second generation African immigrants, predominantly from Angola and Cape Verde, who have spent the last decade formulating a rhythmically complex, addictive take on dance music. From the ’70s to the early ’00s, refugees travelled to Lisbon, fleeing the war-torn former Portuguese colony of Angola. In a wearily familiar piece of urban engineering, Lisbon’s town planners decided to shuttle these refugees out of sight, housing them in decrepit projects known as bairros on the outskirts of the city. Isolated from Lisbon by scant public transportation and taxi services (drivers often assumed that going into a ‘bad’ bairro was an invitation to get robbed), the immigrant community had little choice but to come up with their own entertainment.

As a result, local DJ crews started setting up speakers around the bairro and hosting block parties. The sounds they played were a mix of contemporary hip-hop, R&B and international EDM, but also—crucially—the percussive pop music of Angola, the frantic sounds of Kuduro, and the mid-paced, syrupy ballads of Kizomba. Around 2004, in Quinta do Mocho, a project on the North city outskirts, a young DJ called Nervoso started playing his own minimalist mutation of Kuduro and Kizomba. Rather than just relying on the vocal heavy Angolan originals, Nervoso was producing his own renditions, stripping out the lyrics to leave a skeleton of percussion, all melody ceding the floor to propulsive rhythm. If Kuduro was disco, Nervoso was creating the techno response; a hot, hypnotic lock groove that inspired instant movement. Nervoso often tells stories of parties where he could play a single locked groove for hours on end, and the dancers would literally climb the walls in chaotic delight.

As word of Nervoso’s sound spread, a scene sprung up around him. At first, it was localized to Quinta Do Mocho, but it soon grew to contain other, similar crews spread around the outskirts of Lisbon. Slowly but steadily, the sound consolidated. By 2010 the Príncipe label, established by a group of record shop staffers, music enthusiasts, and promoters, caught wind of the fact that something remarkable was happening at the edge of their city. Rather than rapaciously swoop in, the Príncipe crew started hanging out at the bairro parties, familiarizing themselves with the names and faces. After a couple of years of immersion, they began releasing records. The first was from DJ Marfox, a young DJ who’d learned his craft watching Nervoso, and was now creating a high tempo sound collision of his own. It was Marfox who popularised the term “Batida,” which he specifically translates as “the beating of your heart in a car crash.” After Marfox’s debut, Príncipe released 12”s by Blacksea Nao Maya, DJ N***a Fox, Nidia Minaj, DJ Lilocox, DJ Maboku, and more, all of them beautifully packaged in hand-painted sleeves. They also released more typical-to-Lisbon house and techno sounds of artists such as Photonz and Niagara—meaning that for the first time, the music of the immigrant community wasn’t being ghettoized, but was instead being released on the same label as acts respected in Lisbon’s thriving electronic scene. It was a move that demanded the African artists and their Portuguese counterparts be treated with parity—and it paid off.

The records quickly gained cult status, selling out in days on Bandcamp (some now command up to $100+ online). Significant interest was generated abroad, particularly in London, where grime fans noted the similarities between the frantic, inner-city assault of noise cherished by both scenes. Now, six years on and their catalog numbers creeping into double digits, Príncipe finds itself the unofficial (and, to a degree, unwilling) spokespeople for the hybrid sounds of the Lisbon bairro. Since 2015, they’ve signed tracks over to the UK’s iconic electronic label Warp, and worked with award-winning UK grime photographers Tim & Barry on a documentary about the scene. The documentary, titled Sons Do Gueto, premiered at Lisbon’s film festival this October. At the same time, the label announced releases from Niagara, which Moura describes as “very physical and raw,” and scene king Nervoso (“I think the Nervoso is going to be popular because that Batida element is still very present”). Príncipe has become more visible than ever, and the upshot of this international acclaim is that skeptical Portuguese natives are finally paying attention to the sounds just beyond their doorstep.

“There’s the tradition here, especially in music,” Moura says. “If an artist gets some exposure abroad, then it reflects back on their popularity here. That’s been happening for as long as I’ve been connected with the music scene.”

While it’s frustrating for Príncipe that local appreciation follows international validation, the attention has changed attitudes in Lisbon towards the bairros themselves. As Moura puts it, “Slowly, people are realizing that it’s not by definition dangerous to venture into those neighborhoods. The idea used to be that if you went there, you’d automatically be robbed or mugged, or you’d witness some violence. I can only speak for what’s surrounding this music, but that idea is clearly changing. People are seeing the faces in the press, they’re now thinking, ‘Well, these are regular guys. We can go there, we can interact.’”

One of the places where people can interact is Noite Principe, the monthly club night that Príncipe runs at local venue Musicbox. Noite Principe has become a meeting point, a place where DJs who used to be relegated to block parties can now hear their beats on Musicbox’s formidable soundsystem. And while DJs like Nervoso were once banned from clubs for playing music that ‘caused trouble’—“He always found this strange,” says Moura, “because to him his music is an expression of happiness and euphoria and positivity”—Noite Principe welcomes them with open arms. It’s a celebration of a sound that embraced the furthest edges of a genre and allowed it to grow in front of an appreciative audience. Moura remains enthused by these events.

“The parties continue to be the best testing ground we have,” he says. “The artists can see people’s reaction and improve their skill, and adapt the music to the club environment. From there, we come up with a bunch of new names to release.” The next few months will bring new EPs from Nidia Minaj and DJ Lycox, an album by Txiga (a crew consisting of K30, Puto Anderson, Wayne & DJ NinOo), and a surprise release by an established name.

“We started this as a hobby,” laughs Moura with mock exhaustion. “Sometimes it feels like it’s getting out of control! But, really it’s rolling in a good way for everyone…”  This explosion of activity is testament to just how far batida, taraxxo, and afrohouse—or whatever you want to call the underground sound of Lisbon—has come. Príncipe may have started as an enthusiastic experiment to support underground music; they’ve inadvertently found themselves gatekeepers of a cultural movement.

“We didn’t plan for it to go this way,” Moura concludes, “it’s just that these are by far the most exciting sounds being made in Portugal!” And as the Lisbon underground keeps pushing forward, developing faster than the rigidity of genre names can contain, right now you’d struggle not to agree.