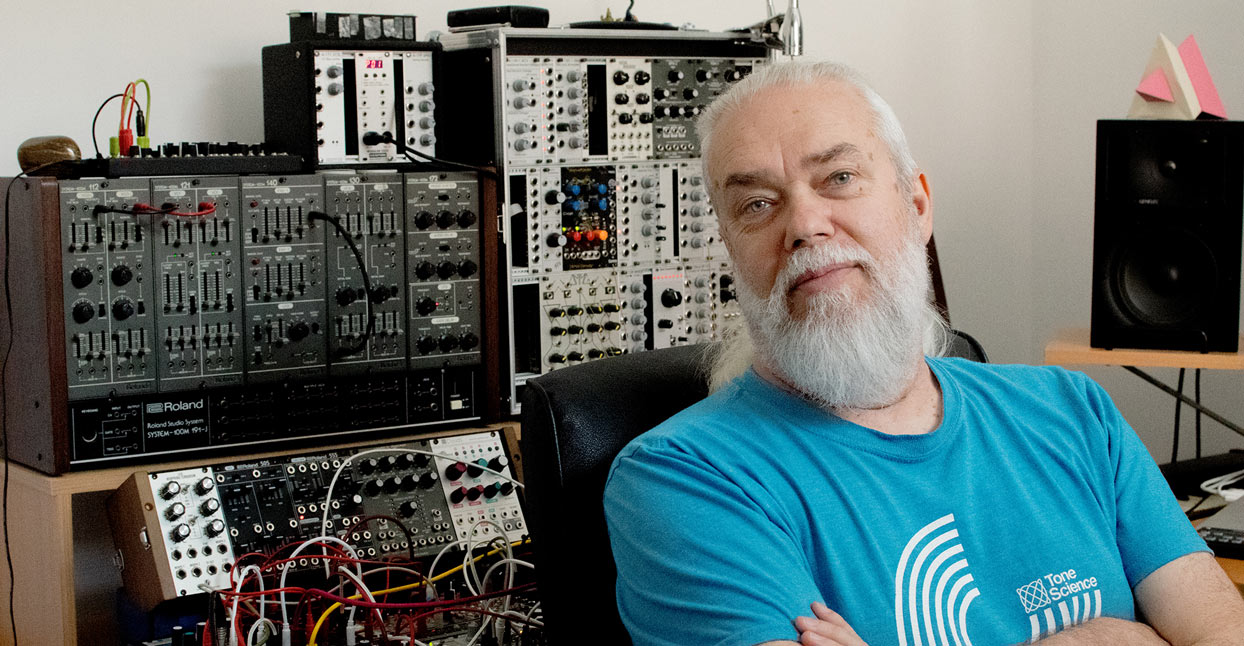 “I wanted to form a bridge between that 1970s Tangerine Dream, sequencer-dominated heritage, and what a lot of the newer and younger musicians now are making on laptops,” says veteran ambient composer and DiN label founder Ian Boddy. “A lot of people my age are so hooked on this old style. That’s all they do. Every album has this Berlin school sequencer chugging along in the background. And that’s fine! But there’s more to be done than just that.”

In 1998, Boddy was releasing music on his private label Something Else Records—a catch-all for self-releases and the odd collaboration that, at the time of its closure, had been in operation for over a decade. The desire to publish music by others and to form a more coherent identity led to the formation of DiN, a more formal label, in 1999. 84 records in, DiN has put out work by renowned composers like Robert Rich, spotlighted on the Index series of compilations; it’s even got its own sub-label, Tone Sciences, which launched in 2018 to spotlight music made with modular synths. From enchantingly elaborate and soothing drumless IDM to unsettling pulsing ambient techno, there’s no one DiN sound—it’s more of a DiN sensibility. With a 20th anniversary celebration around the corner, it’s safe to say Boddy has been successful building that bridge from the past to the present.

DiN was established at an ideal time—the rise of digital distribution allowed for niche and obscure music communities, such as the one DiN caters to, to really thrive. Of course, the streaming age has its own drawbacks, which Boddy is mindful of. As it becomes easier for DiN to reach its target audience, the significance of physical releases—the label was founded around the idea of limited physical runs of its releases—falls. “I make a conscious decision on Bandcamp to not allow any of the tracks to be streamed or bought independently,” he says. “That’s where I have to draw a line in the sand as an artist: if you want this track, you have to buy the album, because the project was conceived as an album. It’s like buying a book and only wanting to read one chapter!” What arises is an adapt-or-die situation, where Boddy seeks to make the physical releases integral to the experience. They’re collectables.

As for the label’s future? “To be honest, it might sound facetious, but I just want to keep going and doing what I’m doing,” he says. “I’d like to grow the label, try to get some more attention, and just keep releasing pieces of music on physical mediums.” There’s a real earnestness to his wish—DiN has served as a hub for alternative electronica for a stretch longer than many labels get to exist. In its current state, it offers an incredibly varied assortment of ambient electronica from artists of many different stripes, influences, and philosophies; continuing to thrive is all one could ask from such a project as passionately crafted.

Below is a selection of essential releases picked from the DiN catalog.

In 2001, DiN began a tradition of compilations that’s been upheld in the 18 years since its initial manifestation. INDEX01 was an album comprising the best of the first nine releases, kicking off a series of sampler records releasing once per set of ten for free. Fittingly timed to celebrate the upcoming 20th anniversary, the sixth in this series follows in tradition; it features tracks across the latest releases from Bluetech, Node, Erik Wøllo, ARC, Parallel Worlds, and more.

The second and newest installment on DiN’s new modular sub-label, Elements and Particles is a whole and rewarding listen. Showcasing the result of nine artists’ adventures within the world of modular sound design, Elements and Particles is artificial and gritty at points (“Your Strange Glitter”), minimal and meditative at others (“Overtone”), and a thoroughly engrossing experience throughout.

Altair is the latest single-artist album release on DiN at the time of writing, a live album which Boddy is understandably proud of. “Altair is a live album taken from my trip to Philadelphia last year, a really big trip for me,” he says. “On the night of this concert I played an hour and a half in the church, then we took all the gear down, drove over to the radio station, set it all back up again, and then I did an on-air show.” The division between the two parts (titled “The Gatherings” and “Star’s End,” respectively) is instantly noticeable. “The Gatherings” leans more into ambient techno conventions, while “Star’s End” is much more subdued and moody.

Télégraphe is another recent addition to the DiN catalog, the debut record of U.K.-based duo d’Voxx. The pair were discovered by DiN through a submitted demo, one which caught Boddy’s attention within the opening moments of the first track “Opera.” “Opera”’s initial disorienting soundscape clears the floor for a sole arpeggio which develops throughout the track, supported by growly bass undertones and a dry and groovy electronic drum kit. It’s only uphill from here. The record’s peak is its sixth track, “Akalla Söder,” a minimal and glitchy IDM cut that fuses chirpy and energetic lead synths, smothered in reverb, with deep and distorted kick samples.

ARC is the collaborative project of Boddy and fellow British ambient artist Mark Shreeve. The pair have been putting albums out under the ARC moniker since just before DiN’s creation, mostly focusing on a signature fusion of trance, drone, and IDM. Fleet is the 10th record tied to the project, with the same bones as previous ARC work but a brighter, livelier overall sound.

U.K.-based ambient four-piece Node released one album in the ‘90s, took 19 years off, and returned in 2014 with this gem of a second album. The work on this record retains their trademark style—extended, glitchy epics where moods can change at the drop of a hat, but they’ve been updated with a modern hi-fi mix sound and more complex melodic sequences. There’s a certain irregularity and lack of balance across the album that gives it a very live feel, which works in its favor.

Bakis Sirros, aka Parallel Worlds, teams up with Node member Dave Bessell for Morphogenic, a heavenly collaboration. Bessell incorporates naturalistic, grounded but often unsettling features into his music, a perfect counterpart to Parallel Worlds’ dissonant harmonies and coarse, demanding synth textures. Altogether, Morphogenic is the perfect encapsulation of DiN’s focus, the bridge between ambient styles, serving up a collection of cuts that are as satisfyingly grainy as they are fascinating and otherworldly.