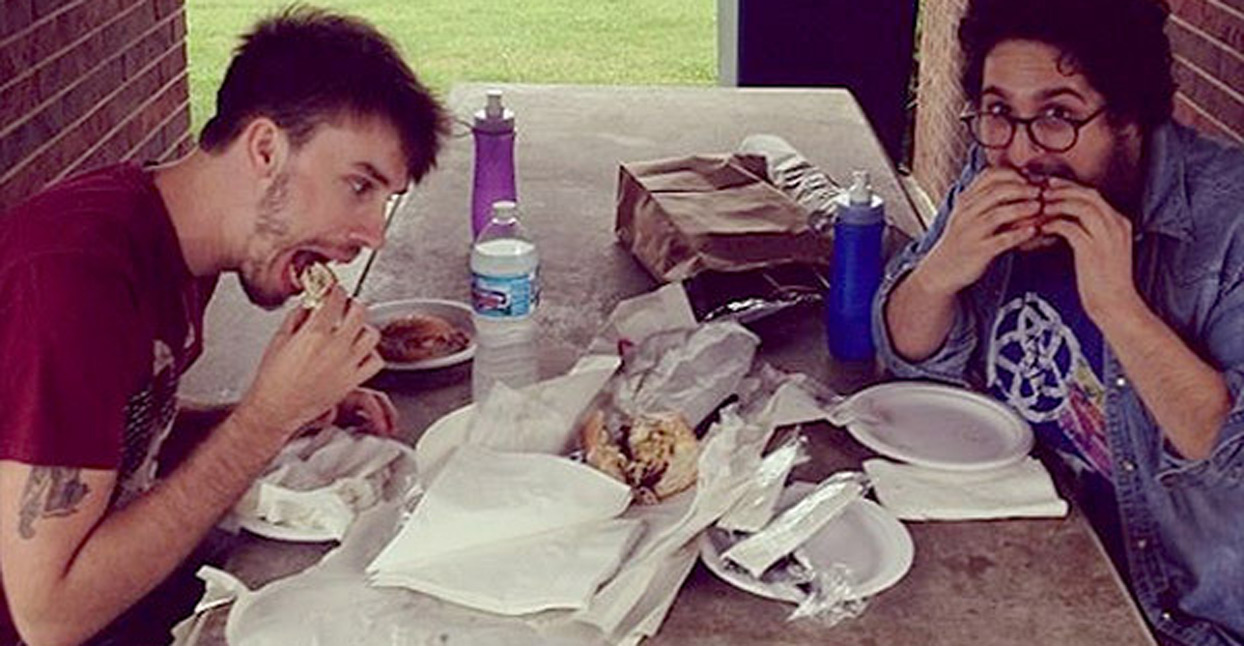 “It’s like if video games had flesh—like, if you played them on an analog flesh console.”—Doug Kaplan

If the Chicago label Hausu Mountain hadn’t spent the last four years building a formidable catalog of oddball electronic music, they could just as easily have turned heads as visionary graphic designers. The covers for each of their 40+ releases, roughly half of which come from label cofounder Max Allison, are woozy, color-drenched affairs, full of deep detail and unsettling scenarios. If M.C. Escher had lived long enough to design video games for the Nintendo Entertainment System, these are the kinds of worlds he might have come up with.

On the cover of the latest album from Bang! Bros, a miniature king, trapped in a mirror, kneels praying to a stack of digitized cans. On Good Willsmith’s Snake Person Generation, a cluster of cartoon sea monsters are impaled by a stack of exploding green planks.

“It captures the fine grain of the sound,” says Allison. “A lot of our releases use these sizzling and crackling sounds, and that’s what I’m thinking about when I’m designing.” Indeed, much of the music Allison and partner Doug Kaplan have released does sizzle and crackle—but it also groans, sputters, hiccups and weeps. Roped Off’s Is Waiting For Your Challenge may open with sound effects from Mike Tyson’s Punch-Out, but it’s quickly flooded by eerie, sticky synths. Khaki Blazer’s Moontan Nocturnal, one of the most brain-breaking albums the label has ever released, glues millisecond samples of smooth jazz, calypso, and funk to panicky digital beeps. Nothing on the label slots into any easy category; most of it is loosely based in electronics, but none of it falls within the traditional rubric of “electronic music.” Like the two films that give the label its name—Japanese absurdist horror movie Hausu and Jodorowsky’s legendarily trippy Holy Mountain—the music on Hausu Mountain seems to exist in its own galaxy, with its own impossible rules.

“The imagery of those movies evoked the sort of sound we wanted,” says Kaplan. “All of these bizarre things happening all at the same time, in this unified universe.” The majority of Hausu Mountain’s releases are on cassette only, which highlights the artwork and is the perfect format for music that feels like a strange secret, passed covertly from one friend to another.

We asked Kaplan and Allison to give us a tour of their universe, using eight releases that define the label’s sound.

The Big Ship, A Circle is Forever

One of Kaplan’s early bands, which kicked off Hausu Mountain. Unlike the glitchy synthetic sounds for which the label would soon become known, A Circle is Forever is comprised of plaintive, tuneful, acoustic folk music.

Kaplan: This album is important to me, because it was the thing that I was working on that made me think about doing a label in the first place. I think of making this album and making the label as the same event in my memory. The prog-ness of the record makes it Hausu Mountain. Each track unfolds in a surprising way, and they have different textural shifts—they present all of these disparate moods.

Allison: In some ways, it has this larval or fetal vibe – there’s a simple, ambient hypnosis to it. It’s kind of atypical for where we ended up, so maybe in that way it’s an outlier, but it does thematically and spiritually connect with the later work.

Low-lit, ’80s-arcade synth songs that could soundtrack the climactic competition in a straight-to-VHS skateboard flick.

Allison: He’s one of our closest buds. It’s this guy named Zach Robinson. This was his solo project that he worked on in his dorm. He recorded it all on his own, with a really insular production style. He also put in three years as the assistant arranger to Christophe Beck, a Hollywood composer. Through that gig, Zach worked on a bunch of movies – he arranged the strings on all the songs in the movie Frozen. So basically, D/A/D laid out and arranged the strings on “Do You Want to Build a Snowman” and “Let it Go” and shit like that.

Kaplan: We’ve always loved the music and wanted to work on it. He’s a truly inspiring dude.

Kaplan: You could detach this guy’s ear, plug it in, and use it as a flash drive. His music is so surprising and fucked up – he’s able to make these songs that are so danceable and so off-the-wall weird, full of all these bizarre samples. It has a very cheeky vibe to it. You listen to it and think, ‘How are these beats even possible?’ I respect him more than just about anybody.

Allison: He was 17 or 18 when he made these tracks. He has the mind of artist, and he can’t even control how much he makes. He is pouring music out all the time, and is super fickle about his own work. He gave us an album that’s 45 minutes long that’s never going to see the light of day, because he’s moved on. I think of him in some ways in the same school as someone like Arca, but in a different manifestation—a carnivalesque, tripped-out manifestation. He’s someone who’s interested in using digital sounds in these very syrupy, liquidy, gross, almost physical ways.

One of the weirder releases on a label that prides itself on weird releases, Parrot Head Cartridge contains everything from dead-eyed dub to smoky, elevator slow jams to the kind of thumping, rhythmic music that might rally a Martian army before an attack.

Kaplan: Mondo Lava is two people, and they prefer to remain anonymous. They go by Carlos Fiance and Lazarus B. Jones. We discovered them when I was working at Thrill Jockey, and we got this tape that was a split between Mondo Lava and Eternal Tapestry. The Mondo Lava side changed our lives. So we tried as hard as possible to get in touch with them, and they finally answered and were like, ‘Of course we’ll do a tape with you.’ I think the thing that really struck me about them is that their music sounds like video game music from an alternate reality, where electronics are wetware. It’s like if video games had flesh—like, if you played them on an analog flesh console.

The most immediately-beautiful release in the Hausu Mountain catalog, TALsounds is Natalie Chami, who is a member of Good Willsmith with Kaplan and Allison. The music on All the Way ripples gently, with silky ribbons of synth elegantly laced together.

Allison: There’s no better example of our philosophy, in terms of the kind of people we like to work with, than Natalie. She’s one of our best friends, we’ve known her for years, and she embodies a lot of our ideals when it comes to recording live improvisation. She has this very self-contained world she creates using only her pedals and synths, and an almost stubborn adherence to the policy of ‘no overdubs.’ She has a really refined process for figuring out what she wants to release, and what would make a good album. A lot of her work is segmented by times in her life. She can point to a certain album and say, ‘I recorded that in 2014, when I was feeling sad over this.’ She has these very visceral memories. This whole album has this very confessional, diaristic quality.

Kaplan, Allison, and Chami combine for an album of dreamy, droney songs that play out like intercepted FM transmissions from some REM-state radio station, going from bucolic and moody to shrieking and terrifying.

Allison: For this one, we wanted to record quickly, and that definitely motivated the material to be kind of different. We said, ‘Maybe we’ll make an operatic track, we need an opera noise.’ We put those little rules that maybe defined the material differently.

Kaplan: The stuff that we’re doing on the B-side has this Oblique Strategies/Naked City influence, where it’s just throwing out a couple of tiny rules and a couple of buzzwords, and then just going with it. It was fun, because it’s a different sort of improv than our previous projects, which were more mapped out.

If there is a “breakout star” in the Hausu Mountain universe, Alexandra Drewchin is it. RIP Chrysalis was one of 2015’s best records bar none—skin-crawling, digital-age Appalachia that sounds like an old witch singing her spell book late at night.

Allison: People respond to Alexandra really strongly. Any publication, or person who sees her play, not only wants to talk with her, they want to connect with her, and help her, and become her friend. She has this very magnetic quality—this gravitational pull. I really treasure her as an artist, because she’s so deep and cosmic and tripped out. She’s really aiming for this spiritual, maximalist, hippie-cyborg vibe. I think she just works on a lot of different levels that people respond to.

Kaplan: I remember she was talking about how she sees herself as a traveling bard. We got to see her play six days in a row, and every set was completely different. Every time she’d play a song, it would come out in a totally different way, with new words and new parts. It blew my mind.

The latest entry into the HausMo discography is divided between Form a Log’s squelching, split-second electro-panic and Moth Cock’s Ken-Kesey-Does-Merrie-Melodies bonkers animation music.

Kaplan: If we could have put this record out first, we would have. This is very much a manifesto record. Both of these bands represent an apex in terms of having total control of their technology such that they can baffle us into submission, while still being completely good-humored.

Allison: I think some people maybe are turned off by the notion of the band Moth Cock. Like, they really don’t know what the fuck to do with it, especially because it’s called Moth Cock. But to us, it’s the most sacred example of what we want to do. They play live using very rudimentary pedals and gear – basically using equipment that you’d buy for your 12-year-old to start them off on playing music.

Kaplan: They have almost no equipment, and yet they deliver the most genre-mashing, complicated stuff I can ever imagine. It’s so densely packed, with a million billion ideas that reference all these different times, different qualities of sound fidelity – it’s the most textural music of all time. It also brings a huge smile to my face.