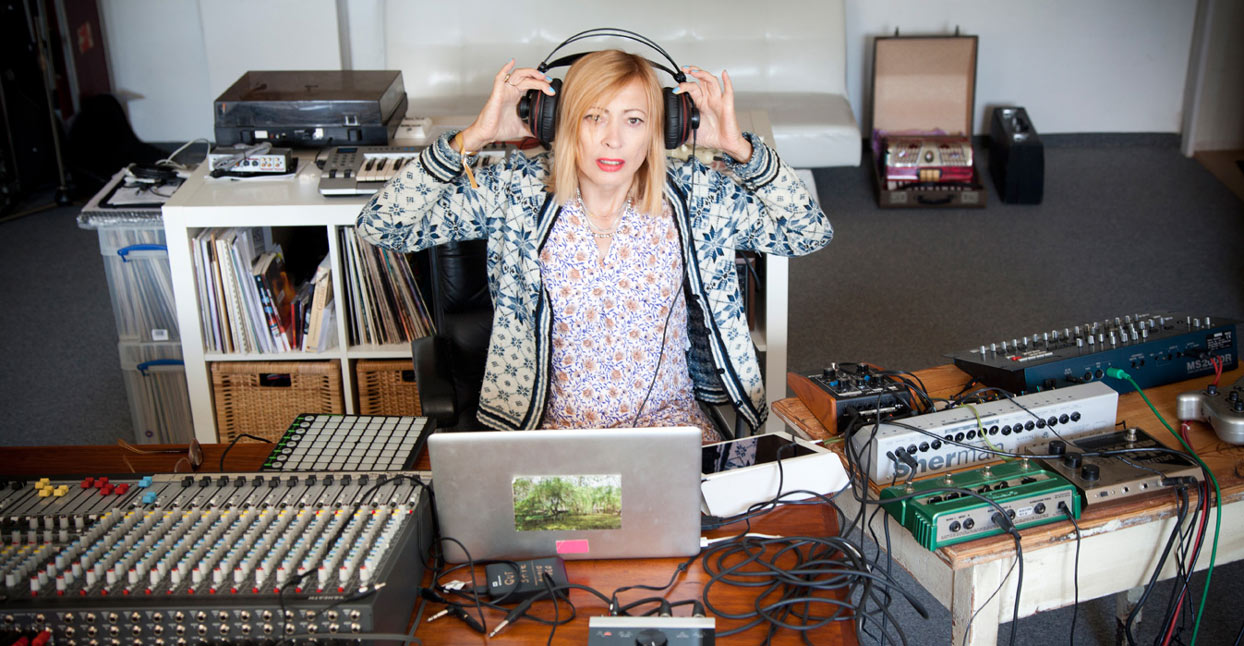 “You could still see the bullet holes in the houses,” Gudrun Gut says of moving to Berlin back in 1975. Far from the gentrified, cultural hub the city is today, she remembers it being a strange and polarized population of “only really students and pensioners” and “nobody between 30 and 50.” Naturally, a burgeoning hive of activity existed among the young people, which she was instantly drawn towards. “There was a big political scene from the students, as well as big communes and a strong feminist movement.” Gut stayed in Berlin, and over 40 years later, has become a venerable figure in the underground scene as a musician, producer, DJ, and label boss.

When she discovered the world of German music back in the 1970s, Gut was sucked in by the motorik of Neu! and the psychedelic grooves of Tangerine Dream, but eventually, like many, felt radicalized when punk hit town. “That was a big deal. That was kind of a revolution, to see that you can do what you want,” she says. While studying visual arts, Gut formed Mania D in 1979, a post-punk group that incorporated free-jazz saxophone explorations, twitchy guitar stabs, new wave bass lines, and multi-part vocals that recalled the spirit and primitive essence of early Rough Trade singles by groups like Kleenex and Swell Maps.

However, a desire to make unique music, and to do so autonomously, had sparked to life some years before, as Gut tells us through a recent discovery she made. “I found this letter from an old boyfriend from when I was 15 or 16. He played guitar and sang and this letter talks about a fight we had because apparently he wouldn’t show me how to play. I was not the girl who would be sitting next to the guy being like, ‘Oh, you are so great.’ I was the girl saying, ‘Show me the chords.’”

By 1980, Gut was also a member of Einstürzende Neubauten, the Blixa Bargeld-fronted group that are now renowned as pioneers of the German avant-garde and industrial scene—Gut played the group’s first ever gig. On the recording, her Korg keyboard parts can be heard pushing through the blistering blasts of guitars and the shrieks, howls, and growls of Bargeld, all contributing to form a hissing cacophonic fury.

Mania D ended not too long after it began and Gut’s stint in Neubauten was short-lived. Just a year later, in 1981, she had formed Malaria! with Bettina Köster. Malaria! had a slightly more new wave bent. While still a deeply experimental project, releases such as New York Passage recalled the pop-tinged punk of groups like Siouxsie & the Banshees, who Malaria! played alongside, as they did many other seminal groups and artists of the time, such as The Human League, New Order, The Birthday Party, John Cale, and Nina Hagen.

The group carried on for over a decade. Their 1991 track “Kaltes Klares Wasser” would later be covered by Chicks on Speed, renewing interest for Malaria! in the early 2000s electro and dance-punk boom. However, by the mid 1990s, Gut craved working outside of the formal structure of a band. “I really loved playing with other people but I had a bit much of the typical band problems. The usual conversations and fights,” she says.

This desire to create things entirely independently was taken to another level when Gut saw German electronic artist Barbara Morgenstern perform. “It inspired me to go solo. It gave me the courage. She was so natural and in those days, it was rare to see a solo female performer doing everything. Maybe it was a singer of a band or the girl who plays bass or something, not a complete solo electronic performer. It really inspired me. I then immediately formed my label.”

The label Gut speaks of is Monika Enterprise. She formed it in 1997, and it’s home to artists such as Barbara Morgenstern, Quarks, Sonae, and Cobra Killer. Named after a suicidal pet fish (“I had a fish called Monika and I didn’t take care of it enough and it jumped out of the aquarium and died”), the label turns 20 this year and, alongside other pioneering underground German labels Karaoke Kalk and Shitkatapult, Monika will be celebrated as part of the Pop-Kultur festival in Berlin, under the banner of SKM60 across multiple events.

The label was born from having “no faith in major labels” and was about “making a statement,” and it has remained a constant presence in Gut’s life. She takes an active role in developing and nurturing artists, something she feels is absent from a lot of contemporary labels. “This isn’t happening with a lot of labels these days, actual A&R work,” she says. “There was no label for the sort of music I wanted to put out; people were still into stadium rock and shit. A whole new music scene started in Germany around then when those other labels set up.”

Whilst Gut by this point had collaborated with the likes of Faust’s Hans Joachim Irmler and Blixa Bargeld once more, this new platform gave her a chance to reflect herself entirely, as the label is also home to much of her own music. “I had no connection to anything else, I wanted to feel myself through the music I was making. This is an important part of pop culture, for me, that it reflects some kind of reality.”

Gut’s own output is mostly minimal electronic explorations, inflected by techno, house, cosmic disco, and 1970s German experimentation. On 2007’s I Put A Record On, she took on the stark Smog number “Rock Bottom Riser,” and gave it an eerie and metallic sheen.

While perusing Gut’s roster on Monika Enterprise, aside from the eclecticism and collaborations, you may also notice that all the artists on her label are women. It is no coincidence. “The music industry needs many more female artists, so I’m happy to be supporting that,” she says, a stance she’s taken since forming the all-female Mania D. “However, we still we have a long way to go. It’s still something like 10% of acts booked at festivals are women.”

The label’s most recent release, Monika Werkstatt, is a collaboration between several artists on her label (as well as some that previously weren’t, such as the excellent Lucrecia Dalt). The record is an end result of them all holing up, collaborating, and creating new work at Gut’s countryside house and studio. “I was a little worried about how it might work because everyone produces their own work, and sometimes solo producers can be pretty diva-esque, but it was absolutely wonderful, it was the best atmosphere.” This has transformed into a live set-up too, and will see the members collaborate as part of the aforementioned Pop-Kultur festival this year. Although Gut says it will be a healthy mix between the prepared and the improvised: “Improv can be so boring, I hate it when they just go on and on,” she says, with characteristic dry humor.

Despite running a label and projects for decades, Gut still feels her work is considered an anomaly or curiosity by some. “This interview is not like this, but 95% of the ones I do, I have to defend myself as a female in the music industry. Always. The question about ‘why’ always comes up, and I’m waiting for the time when that is no longer an issue. I don’t know why I should defend myself for having an all-female record label. Other people should defend themselves—nobody questions someone who has all male artists on a label.”