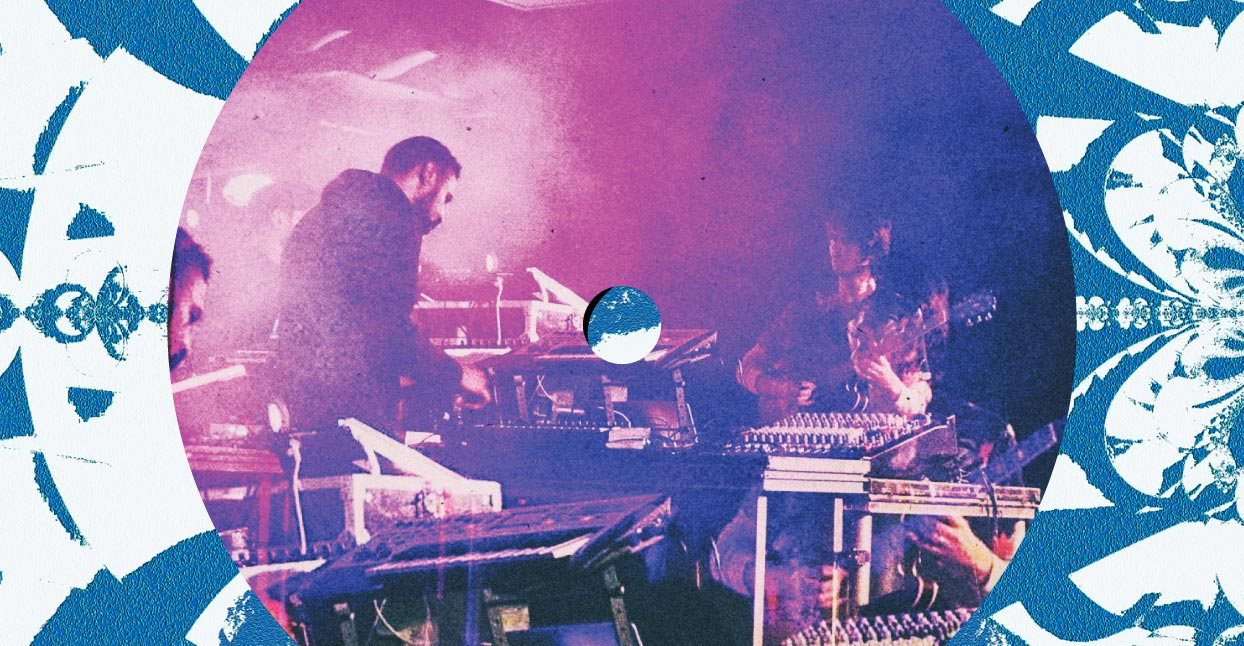 Berlin-based label head, producer, and musician Aybee, aka Armon Bazile, describes his vanguard electronic label Deepblak as an ongoing relationship with the drum. Co-piloted by Afrikan Sciences (aka Eric Porter), Deepblak releases techno, house, experimental, and hip-hop albums, and all of them are rhythmically focused. “We love and live this; it’s not a choice,” Bazile says. “The drums came as firmware, and they will fly no matter the efforts of the operating system. Itʻs the pursuit of the unknowable rhythm.”

Deepblak’s story begins in the late ‘90s, when Bazile was living in Oakland. An autodidact graphic and web designer who started an online mag covering San Francisco nightlife during the web 1.0 period, he found himself inspired by the underground music he was being exposed to. “At the time I was absorbing a lot of scenes in San Francisco, which I enjoyed. But I was hearing something else. Something was missing. It was playing in my mind and would not let me have peace,” he says, “so I started using my DR-660 [Dr. Rhythm drum machine] to get it out.” The mag soon got scrapped, but in 2001, the journey to making music and starting a label began.

“In Oakland, there was an element of call and response,” Bazile says. “Black people don’t come to hear music, we come to participate. So it was conversational. At first, [listeners] did not know what to expect [from the label], but the drums and blues threads linked it.”

In the mid-2000s, Deepblak got their first distribution deal from Groove, out of Chicago. They were about to release the first EP by Afrikan Sciences, Wadada Music. After six frustrating months Groove told Bazile the sales team couldn’t sell it. Devastated, Bazile told Porter, who immediately doubled down: “That just makes me want to go more to the left,” Porter told Bazile. Sensing genius, Bazile immediately made him the co-founder. They’d established the label’s spiritual core.

Porter and Bazile had met through an old bulletin board for fans of 4Hero, so common musical interests were established at the very beginning of their relationship.”That forum was like a homing device for like minds. When I realized that this guy was on the same path as myself, it was a no-brainer that I reach out to him. Finding a home on Deepblak was like getting a passport stamped for the first time,” says Porter.

The references across Deepblak’s catalog are many: the architects of house and techno from Chicago and Detroit, the L.A. beat scene, West London broken beat. Artists like Pursuit Grooves, Damon Bell, Afrikan Sciences, and Octo Octa have no fear of the edge. They are the edge, non-conformists way out in the electronic field, far from algorithmic understanding. “Life is not quantized, nor does it happen at a 4/4 beat,” Bazile says. “No one knows where to put us, they never have, and thatʻs how we knew we’re doing it right.”

For cultural gatekeepers—magazines, distributors, festival bookers, and so forth—who are only focused on positioning black people’s contributions to the art world for financial value (and thus have narrow, predetermined ideas about what constitutes black music), the label can be confounding—and Bazile and Porter are happy not fitting in. “Back in the day, we used to call forward-thinking music ‘that next shit,’” says Porter. “Then somewhere along the line many of us wanted to hone in on cultural identity as it related to progressive styles,” Porter said. “But along the way, terminology gets bogged down and becomes a catch-all for things outside the norm, and eventually clichéd to a point where the innovators may disassociate. Personally, I will always stay on that new new, or next shit—the nexus of ancient and next.”

Here are some entry points to Deepblak’s unconventional world.

“Expanding the boundaries. Harriet Tubman hijacking the USS Enterprise.” That’s how Bazile explains the impetus behind the fully improvised Sketches of Space project he teamed up with Porter for. “We wanted to move with feeling, jazz as life. The only reason the continuum gets slowed is because of market distortion. Jamming the signal.” Billed as a tribute to Miles Davis (the title is an obvious references to Sketches of Spain), it’s not a jazz album; Bazile and Porter take jazz as a methodology here. “Sketches was an exciting endeavor,” Porter says. “It was a look into the unknown, years of us woodshedding together, learning how to co-pilot a journey from beginning to end.”

On their first expedition as Astral Walkers, Bazile and Lars Bartkuhn make house music that merges different kinds of percolating rhythms, referencing the sound of revered long-running party Body & SOUL as well as the spirit of atmospheric drum and bass. Bartkuhn is best known for his work with his iconic Needs Music imprint, which blends electronic sounds with jazz, classical, and funk. Bartkuhn and Bazile met at an impromptu jam performance at the Xjazz Fest in Berlin, where the seeds were planted for their future collaboration. “Lars is a master at layering. Man, he did this solo at Freerotation festival a while back that made time stand still,” says Bazile. “He just sails on that guitar.” Both worked in tandem on drum programming, vocals, and synths, with Bartkuhn also contributing guitar, piano, Rhodes, and live percussion. Jazz/rock bassist Helmuth Fass plays live bass.

“The Odyssey was my most important album because it allowed things to come after Astral Walkers. A lot of folks didn’t get it; that lets me know it worked,” Bazile says. “The process involved using one singular folder of sounds, purposely. It’s the first and last time I will do that.”

These deliberate limitations yield tracks like the retro-future jam “Man Over Machine,” which projects a cold automated existence for much of its runtime. In the last moments, when the acid bassline is pulled back that humanity appears in the form of a well-hidden conga drum. The heavy, metallic friction running through the track, brings together the past and present—mid ‘80s acid house, contemporary experimentalism—for an oddly timeless feel. Detroit producer and DJ Mike Huckaby—techno royalty, really—continuously evangelized the track during his DJ sets around the world and on YouTube. The idea behind the song? “Imagine two human beings talking, but the people who get to see the conversation must be granted access by a machine,” says Bazile. “That will decide what is relevant to whom. A line of code as judge, executioner, and jury. There is the struggle.”

A self-taught multi-instrumentalist, Porter has been recognized and championed by Gilles Peterson and Georgia Anne Muldrow. His work as Afrikan Sciences refuses to draw separations between genres; he’s always tying threads between all the pertinent musical traditions that inform his tracks. He recontextualizes house, techno, and breakbeat with fluid arrangements for an uncanny and unique sound. Porter uses minor chord dissonance, oblique disruptions, and tempo rigidity are used to communicate how our hectic world feels. The four-track Reciprocity EP is a throbbing, beated reminder of the proximity all breakbeat subgenres share with one another; see “Son Shine,” which deftly captures the interplay between house and broken beat. In a field where algorithmic regurgitation has become the norm, Afrikan Sciences remains genuine.