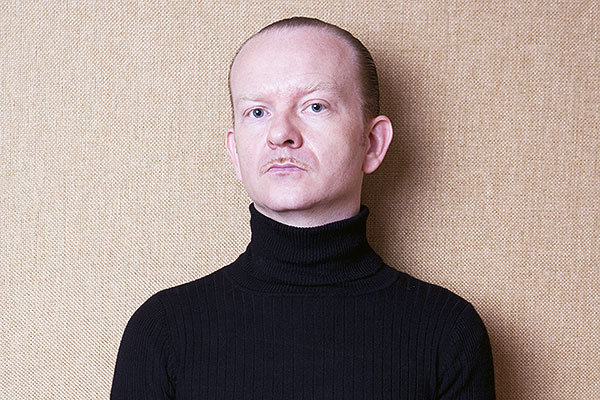 As we move into 2015, Uwe Schmidt celebrates his 25th anniversary of putting out records. In that time, the German electronic musician has released music under a staggering number of aliases and in a jaw-dropping array of styles. He’s best known for the arch electronica of his Atom™ and Atom Heart projects, and even non-electronic listeners may well be acquainted with his Señor Coconut project, which reimagined Kraftwerk’s catalog as electrified salsa and cha-cha standards. (Schmidt, 46, was born in Frankfurt, but has lived in Santiago, Chile since 1997.) Those names barely scratch the surface; consider also Brown, Superficial Depth, 21 Brothers, i, Erik Satin, Replicant Rumba Rockers, and Weird Shit—in all, more than 60 aliases span everything from neck-snapping EBM (Lassigue Bendthaus’ Matter) to starry-eyed ambient and ambient trance (Atom Heart’s Orange [Monochrome Stills] and B2/Atom Heart Live) to bit-crushed Latin experiments (Los Sampler’s Descargas) to the mind-bending rhythmic and timbral fluctuations of Atom™’s 2009 album Muster.

Given that expanse, his Atom™ Audio Archive project might look like something of a fool’s errand. Without ceasing work on new recordings, Schmidt is methodically remastering and reissuing every recording in his catalog. That’s some 1600 tracks, or roughly 150 full-length albums’ worth of material. (Check out the growing collection on his Bandcamp page.)

“Everything started as a process of organizing things,” says Schmidt, who conceived of the project eight or nine years ago. “As one thing led to another, I realized how little idea I actually had about the timeline of my releases.” In the effort to keep track of it all, he began logging his discography into an Excel spreadsheet and converting the master recordings to digital files. It was while converting DATs to AIFF that he realized, he says, “how different—and often ‘bad’—some of the masters sounded.” So he decided to remaster all of it to “homogenize” it—to correct for differentials in volume when playing tracks at random. In what he calls a “symbolic act,” he began the remastering process with his very first release, Lassigue Bendthaus’ Automotif EP and the subsequent LP Matter.

Early on, Schmidt had considered compiling the entire archive as a physical release—stored on a hard drive and, perhaps, encased in a brick-like object to give it extra heft—but he eventually settled on making the archive available digitally online. So far, he has remastered 16 albums, or roughly 10% of the catalog. “I’m very aware of the fact that this project may easily take me years,” says Schmidt, “simply because, in between all the remastering, new productions are coming along as well!”

Bandcamp: The Atom™ Audio Archive sounds like a massive undertaking. What have been some of the biggest challenges?

Uwe Schmidt: I would say that the biggest challenge is time! I have always been pretty organized, technically and practically, so finding and organizing the master tapes was not such a big deal. Neither was the process of digitization a challenge in any way. The real “problem” is that remastering is a real-time process, which means that, working fast, it takes me a day or two per album. You can do the math.

BC: What have you been working from mostly—DATs or computer files?

US: Both, actually. From 1990–1999, more or less, everything was recorded on DAT. After that, masters ended up as digital files. To my surprise, I had really little lost or damaged data and was able to find or restore almost anything. There were only two tracks (out of roughly 1600) that either I could not track down or had corrupted.

BC: Did you keep fairly neat archives of your work, or has this entailed a lot of digging through dusty cardboard boxes to find the originals?

US: Fortunately, making order is probably my second favorite way to spend my time. My entire archive, the DAT recordings as well as the digital files, has always been very, very organized, hence finding the originals was not difficult at all. I spend a lot of time archiving everything I do and over the years have developed quite a good system, which takes little time and effort. I can basically find any track I did in a couple of seconds, even without physically being in my studio.

US: My modus operandi is very much “lust” based. [Editor’s note: In German, to have lust for something means to feel like doing something.] Whenever I feel like remastering an album, I pick one that feels or sounds like it could be fun. I am not concerned with linearity or maintaining the original release sequence. Needless to say, almost every production bears a certain difficulty, and remastering can turn into quite a challenging task itself. Sometimes I leave the “difficult” tasks for another moment, when I feel like I can handle them, and instead opt for an “easier” production.

BC: I’m assuming that some of these recordings you probably don’t even remember making; perhaps some sound better than you remembered, and others worse. What has the emotional experience of doing this project been like?

US: When going through the archive for the very first time, that is, when searching through DAT tapes and CD-Rs, I suddenly realized that I had forgotten about a really large portion of my work. In some cases I had totally forgotten that they existed—the titles/names themselves—while others I could remember, yet had no idea how the music itself sounded. Of course, there were plenty of moments when a very good memory of a production was shattered, but the opposite happened as well, when productions I remembered poorly suddenly managed to surprise me. I have to say that my feelings toward certain productions went through the entire array of possible reactions, positive and negative. To make it even worse, within the very same process of remastering a piece, my opinion would flip 180 degrees, which then led me to the conclusion that I simply could not have an objective point of view on my own work. Since that conclusion, I just try to look at it in the most detached manner, simply trying to remaster it, technically speaking, as well as possible and then just let it go.

BC: Was there anything you decided not to re-release?

US: There are a couple of co-written tracks I hold copyright for, yet decided not to include in the archive simply because they felt more like my co-writer’s work. But that’s the only exception. All the other pros and cons in the end seem more mood-related than objective, so I decided not to take them into account.

BC: Has it been odd, revisiting particular moments in your life?

US: Oh, yes, certainly! Listening to some works felt like opening a diary and made me vividly remember certain moments, places or people. In general, going through an archive like that, which spans roughly 20 years of creating music, has been a strong emotional journey.

BC: Have you gained any insights into your own artistic process or the shape of your career?

US: Probably the most impressive insight I gained was that, as a whole, my catalog appears to be very homogenous. This was a surprise, since throughout all the years I had always been strongly convinced that I was constantly taking very extreme directions within my choices. Now, looking back at it, everything seems logical—that is, every step leads to the next, and I can see small and big arcs that connect certain portions of my work through time. This has been very eye-opening and, as a consequence, has enabled me to work with my archive in a more natural manner—for example, re-sampling/quoting myself to create even more reference points within the catalog. I now think that the archive itself is the composition, not the tracks that make it.