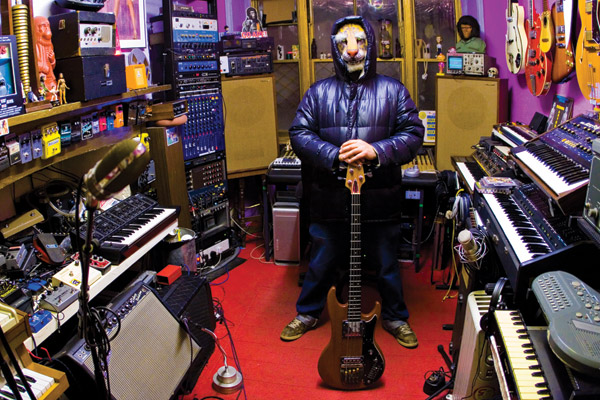 “It’s just meant to have that cheeky, childhood vibe, you know? Like, sneakin’ around the playground, killin’ zombies, and winkin’ at each other.”

In celebration of Bandcamp’s fifth birthday, we’re spending the week focusing on video game soundtracks, a category that has sold nearly a quarter million units to date on the site and pulled in just shy of $1.5 million USD. For this week’s feature story, I hunted down Shawn Lee, the ambling London-based multi-instrumentalist, producer and mastermind behind the original soundtrack (OST) to Massive Black’s new videogame Zombie Playground, which debuted on Halloween.

Lee has a humble and storied career in the music industry. In addition to his own solo work and touring band, he’s worked on tunes with everyone from LA-based singer AM, to the late Jeff Buckley and the mysterious and secretive Clutchy Hopkins. Lee began writing for video games when Rockstar Games tapped him to compose the music for their 2006 game, Bully. He remembers adapting to the new workflow, which was a little bit vague and as hush-hush as his releases with Hopkins.

“[Bully] was so top secret, we worked on it for eight months and even my studio engineer didn’t know anything about the game. He didn’t even know what it was called; it was made on a very need-to-know basis.” Rockstar’s music supervisor gave Lee three DVD’s packed full of reference music, and told him to start from there. According to Lee, at that point there was nothing to do but dive in.

“One of the more obtuse references was that they wanted ‘ambient wrestling music’ – and of course, ambient wrestling music doesn’t really exist. You don’t really think of ambient music working with wrestling at all! Such an abstract concept. But, you’re doing so many cues of music, you just have to start sort of instinctually, and just do it. Sometimes the only way to solve the riddle is just by doing it.”

Zombie Playground was another story. “I had a strong idea of what I wanted to do straightaway,” Lee says, “so I had a meeting with [Massive Black] to discuss where my head was at. They said ‘yeah, we’re on the exact same page,’ so I just started making tracks.”

Before recording though, Lee narrowed down his instrumentation from the impressive arsenal that clutters his personal studio. This helped to create some sonic guidelines and kept inspiration flowing in the right directions. “I like to compose in that sort of way, decide on what the basic sounds are going to be – my meat and potatoes.” In this process of determining a “sound palette” he imagined himself as each discreet and idiosyncratic member in a full zombie band. “The drummer does this sort of thing, the bass player uses these pedals and has this kind of style… I approached it stylistically on every instrument.”

Lee is a gearhead through and through, but he’s adamant that you don’t need to spend all your money on nice instruments. Most of the sounds that appear on the Zombie Playground OST come from funky, consumer-grade keyboards from the ‘80s and ‘90s. Included in his cache, and on the new record: Yamaha PSS-380 FM Synth, Casio MC-202, Crumar, Yamaha 8010 Drum Synth, P-Bass (always played with a pick, usually with a chorus/flanger pedal), Roland Space Echo, piano and a handful of other warped organic instruments. Lee says this final piece is a crucial part of making all of his music unique: “Transfiguring an organic instrument – I find those kind of sounds more interesting. You’re not making a new sound but you’re making a sound ambiguous, so people don’t know quite what it is.”

Lee doesn’t shun computer software — he admits freely that it’s a necessity in today’s working environment — but he’s passionate about hardware, even in the most quirky, low-fi iteration: “You’ve got to see beyond the obvious, you’ve got to realize that there’s a lot of magic in those kinds of instruments… When you have a piece of hardware, the way you interact with it as opposed to something software based, it’s a whole different outcome. It’s so much more playful. There’s a co-op between the musician and the instrument. There’s some sort of symbiotic relationship of you playing the instrument and the instrument playing you. You don’t have that when you’re clicking on a mouse. It’s kind of a cold process.”

“I just heard this clavé with an echo on it, and I was like ‘ah shit, I like that!’ It was simple but very effective, so I made a track that just started with a clavé through an echo, and then I just built the track over it. That became “Janitor’s Jam”.”

Like working for Rockstar, working for Massive Black ,meant only vague storylines to go by. The video game designers would have chats with Lee, give him some images and early shots here and there, but largely they let his imagination run free. With a character like the Janitor, maybe one of the most vivid and exciting visuals of the game, Lee developed a suite with little else but a name.

“I had a rough concept, but I still don’t know that character to this day! I just kind of figured it was the janitor, who became a zombie, kind of lurking around the hallways, you know? And I liked that theme, so then I did the “Janitor Strikes Back,” which was just a variation on it.”

Lee has developed other tricks to give his soundtracks cohesiveness. He recorded all the tunes in a sort of minor mode “home key” for much of Zombie Playground, and confides that you often just have to work in volume, and let the storylines fall into place. “It’s about creating a body of work and then figuring out the best places for things. Even though sometimes I’m specifically composing for certain parts, it doesn’t always mean that’s where the music is gonna’ go.”

To wrap things up, I ask Lee about “Playground Love,” the seventh track on the soundtrack. This being a Zombie game, I was immediately reminded of the lyrics to Air’s soundtrack to the 1999 film The Virgin Suicides: “Yet my hands shaking, I feel my body remains / times no matter, I’m on fire, on the playground, love.” That must have been the inspiration, right?

“No way!” He gives a real-life guffaw, just as surprised as I am. “It’s just meant to have that cheeky, childhood vibe, you know? Like, sneakin’ around the playground, killin’ zombies, and winkin’ at each other.”