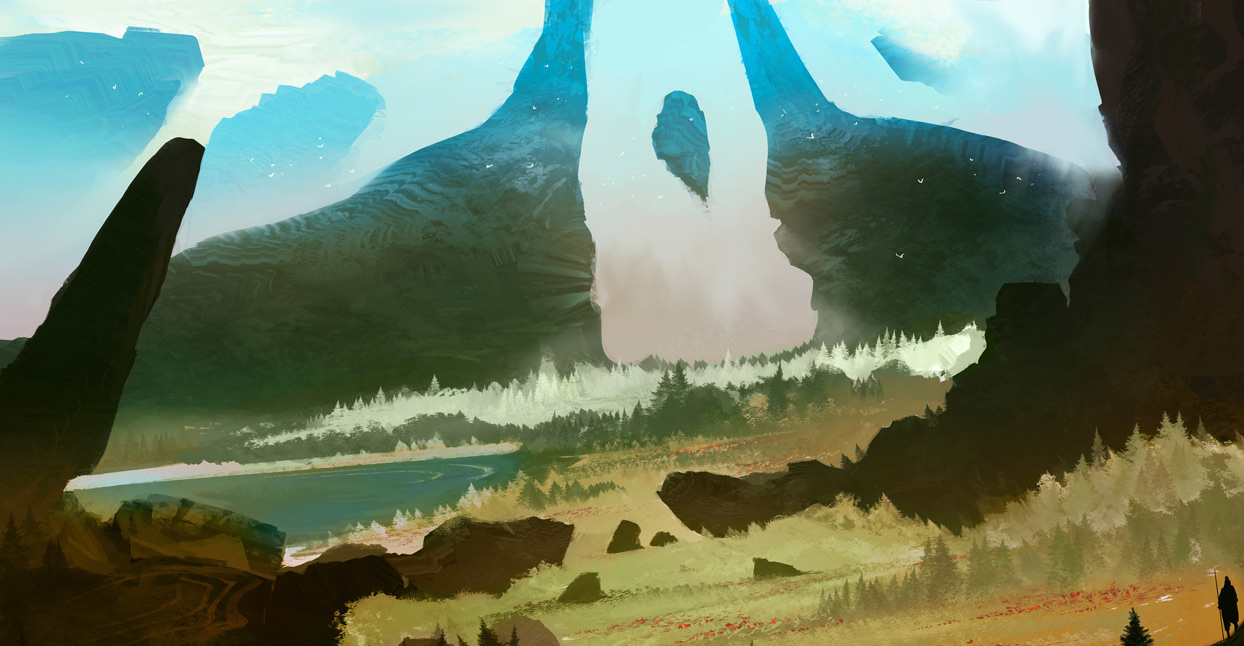 Materia Collective founder Sebastian Wolff doesn’t refer to his company as a record label. Fair enough. With over 150 releases to its name since its founding in 2015—including game music remixes and covers, original game soundtracks, and sprawling community-based compilations—Materia is more of a video game music avalanche.

The company got its start when, on a whim, Wolff organized an 87-track tribute to Final Fantasy VII. From there, extended community around that project continued on as a private Facebook group—which currently boasts over 600 members—that would drive many of the imprint’s subsequent releases. “The natural progression was to do Final Fantasy VIII a couple of months later,” Wolff explains via telephone from his home in Seattle, “and then we got into the swing of things.”

The game soundtrack covers world is a bit of a wild west. Because original game music is often unavailable across music platforms, low-quality knock-offs of popular game soundtracks proliferate online. But Materia’s multi-artist tribute releases—sometimes covering a single game’s soundtrack, sometimes more far-reaching—are refreshingly fan-centric in their approach to game music. Artists pitch songs, albums, and concepts they’d like to pay homage to, and the Materia community—a mishmash of amateur and professional musicians who often collaborate on recordings over the internet—make it happen. “Our community albums aren’t necessarily about commercial viability,” Wolff says. “They’re about finding people that have connections to these songs and these games, and finding a way to reach them and celebrate with them.”

It was in that celebratory spirit that Monica Wang, a quality assurance analyst for an insurance company in Southern California and self-described music hobbyist, came to co-produce a tribute to video game title menu music with Ben Wallace, a professional Brooklyn-based composer and musician working on his doctoral degree with the Yale School of Music. That collection, comprised of 52 tracks from games as diverse as the racing classic Mario Kart 64, the competitive shooter Overwatch, and the breakout indie hit Celeste, was released January 18 as MENU: An Homage to Game Title Themes. It features hypnotic hip-hop beats (Losn’s take on “Break Out” from Ape Escape), finger-picked barn-burners (Joe Zieja’s “Reel ‘Em In, Boys!” from Assassin’s Creed IV: Black Flag), and even a talkbox-fueled G-funk anthem (Peter Jones’s “WAKE UP,” originally from Minecraft). We spoke to Wang and Wallace via telephone about compiling the collection, and about Materia Collective’s unconventional approach to crowdsourced tribute albums.

Can you each tell me about how music and video games crossed paths in your lives?

Ben Wallace: I’ve been playing games since I was a little kid. What I gravitated toward were classic Nintendo games and Japanese roleplaying games. One of the first game soundtracks I ever latched onto was Grant Kirkhope’s score for Banjo-Kazooie, and that remains with me today—it’s so cute and quirky and strange. I stopped playing games for a bit, but when I went to grad school, it all came back. I was in school for composition, and I met a lot of people who were also passionate about game music. I even got away with putting video game music in recitals at Yale.

Monica Wang: Most of my video game exposure was through my brother. I played RuneScape because he played RuneScape; I played StarCraft because he played StarCraft. But Super Mario Sunshine became one of my favorite games of all-time, and the music in that game is really great—it sticks to a theme, but it really explores that theme. And one of the first things I saw that made me think I could get into music was a video on YouTube called “Nintendo A Capella.” I saw that in high school, and it inspired me to pursue musical options. But I’m Asian, and my parents were like, ‘No, music is not a viable career,’ so I went to school for math. In my senior year of college I joined a club that did video game music, which was kind of going around then. While I was a part of that, some members introduced me to the Final Fantasy VII album that Materia was doing. That’s how I got into video game music, just as a fun thing to do.

And how did you two meet?

Wang: We’ve known each other since the first year of Materia. I heard Ben’s version of ‘Redacted’ [from the Undertale tribute album, FALLEN] and I was like, ‘Oh my god, I love avant-garde stuff, please be my friend.’ And he was like, ‘OK, crazy girl from the west coast,’ and we started playing Overwatch together. But we only met in-person two weeks ago, at the Music and Gaming Festival!

Wang: Opening themes are the beginning of a story, and everyone has a starting moment—we all start somewhere. After I joined Materia, it hit me that this analogy could be the basis for an album. I knew that I couldn’t do it myself—it would be too much work; I’m not a professional musician, by any means (although I think I have a decent ear, and I’m good at picking up on cool production and musical moments). But I’m not that well-trained at all, so I asked Ben to help me with it.

Wallace: I thought it was a great idea. Menu themes and opening cutscenes serve the same function as overtures from operas or opening themes from movies. And I think that the same way that your sense of smell is triggered to memory, these opening themes recall people’s actual experience of playing a game, and draw them back into nostalgia in a way that a lot of other game music—which gets covered over and over again—doesn’t.

How did you pitch this project to Materia?

Wallace: There’s a set application process that has evolved over the past few years. People who have been involved in the collective for a while can submit an idea to Materia’s leadership team, who will review it to see if they like it, if it’s marketable, if it’s something people can pull off, etcetera. Monica and I were among the first people to go through that process.

So you asked the whole Materia Facebook group to be a part of the album. Do you remember how many submissions you had at the start?

Wang: We had 85 track proposals. We use Google Forms, a lot of spreadsheets. We asked people a lot of questions, including asking them to prove that their selection was licensable in the U.S., because we didn’t want to do that work. So we eventually narrowed that number down to 60, and people wind up dropping out because of time commitments, so we wound up with 52 tracks. Between Ben and I, I think we know most of the people on this album.

Wallace: Although there were five or six newcomers on this album as well. That was something that we were really happy about. We didn’t know what we were going to get when we opened up the submissions, we just opened up the floodgates. But I think we got a really good collection. And we had a pretty good 50/50 smattering of triple-A titles and indie games: things like Mario 64 and Skyrim, in addition to indie titles like Cuphead and Limbo.

So all the curation is artist-driven. That means you’re at the mercy of the musicians you work with. Is that a good thing or a bad thing?

Wang: I don’t think it’s a bad thing. It would be kind of sad if you had to force people to play music they didn’t want to. The community is about fostering this place where people can do what they love to do. Both people who can’t do that all the time and people like Ben, who have legit composition jobs but occasionally want to geek out over Skies of Arcadia.

Wallace: I do think some limitations are helpful, and they avoid giving people paralysis of the blank page. The one restriction we put on this was that the music you chose had to happen before actual gameplay started. It had to be from an opening cutscene, main menu music, file select music—that kind of stuff.

What are some of your favorite tracks on the comp?

Wallace: We really encouraged artists to shy away from really straight covers of the music, and do something that’s wildly different. People actually took that to heart. The two that come to mind for me are ‘Fever Dream’ from Legend of Zelda: Ocarina of Time by a guy named zykO, which I was just floored by; it’s this creepy, ominous, slowed-down take on the fairy fountain theme with all these exotic string instruments. And then another favorite of mine was Eileen Snyder’s take on the Fire Emblem theme, which turns it into this big band samba thing. It’s this groovin’, burnin’ thing. It’s so unique and fun and funny.

Wang: I love ‘Wishes to Relax & Study To’ from Final Fantasy XIII-2 by Glenntai. I love every track on the album, but if I had to pick a favorite I might pick that one. I love all the scratching in the background, and how the melody really flows. It’s really chill and smooth, it has a lot of vibes, as our generation would say, and gives me the feels. It has great production values that also serve as percussive elements. And the other one I love is ‘Wily’s Mysterious Freaking Intro’ from Mega Man 2. I love the nerd-rap takedown at the end. That’s my stuff.

What happened when a song submission just wasn’t up to snuff?

Wallace: Some people might get too ambitious and bite off more than they can chew. I got to flex my teaching muscles a little. We have a series of check-ins where people submit works-in-progress. So if something isn’t up to our standards, I’ll pull them aside. I gave some composition lessons with this album, which was really nice. That was our way of helping people who needed extra help.

And it sounds like there’s some peer mentoring that happens, too?

Wang: Not everyone [in the collective] knows each other, but I don’t think anyone comes into this group with ill will. Materia is a good place to learn and grow, and it’s one of the rare places where that is free.

Wallace: If you have an idea for a track, we have enough people in the collective to cover pretty much any instrument you can think of. You can throw an idea out there and people will help. If someone asks me to record a little marimba thing, I say, ‘Sure,’ and I put a microphone over my marimba and do it. That’s a resource most people don’t have access to.

Both of you are musicians, and you’ve worked on covering your favorite game music in the past. What excites you about that process?

Wang: Even though they’re programmed, video games make you feel like you’re the author of your own story. And the cool thing about video game remixes is that sometimes they’re total reinterpretations of the original. I think our collective is really good about letting people explore their artistry and musicianship through reinterpretation of existing work.

Wallace: In the ’90s, games were seen as this nerdy, niche thing. People didn’t really talk about them. Seeing game music not celebrated in the public eye was sort of disappointing. And now I can find this music online, find sheet music for it. It’s amazing. Music schools always ask, ‘Who’s your favorite composer?’ When I was interviewing for Rice University, I started listing Yasunori Mitsuda, Nobuo Uematsu, and all these other big Japanese composers, and the guy was like, ‘What do these people do?’ I said, ‘Oh, they’re composers for games.’ And he said, ‘OK, who are your favorite real composers?’ Needless to say, I didn’t get into Rice—and that’s fine.