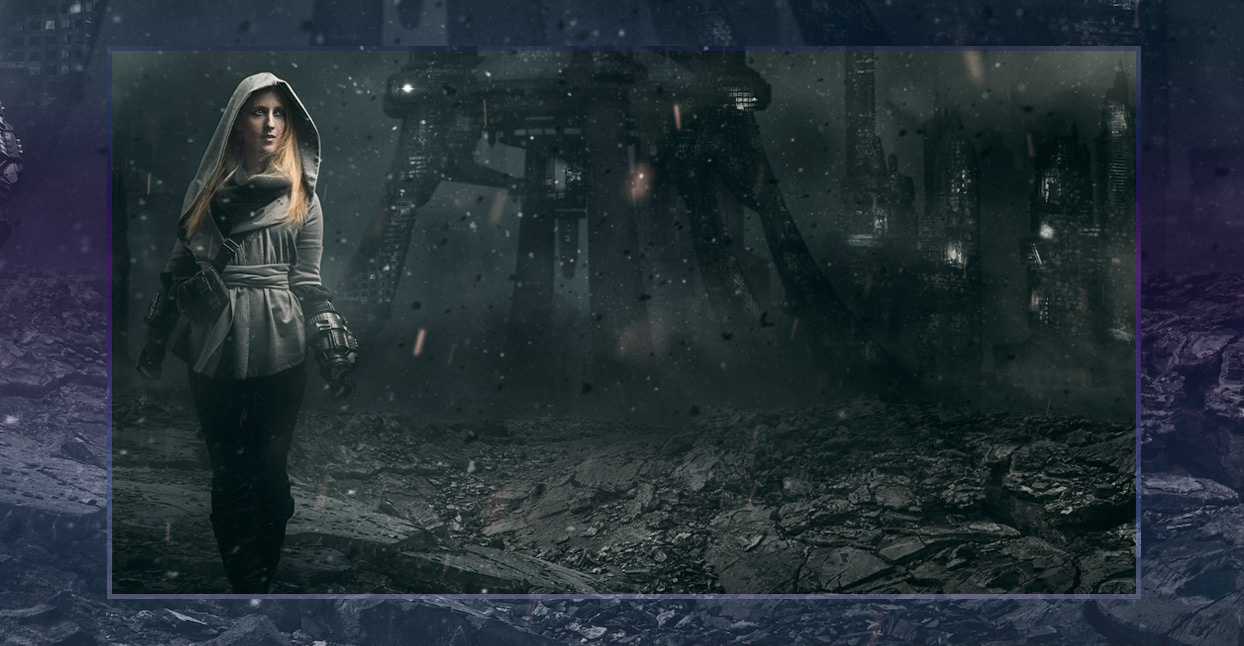 Megan McDuffee is a film and game composer, vocalist, and electronic music artist based in the Bay Area. At 32, she’s too young to remember much of the ’80s firsthand, but that hasn’t stopped her from developing a darkly moody, synth-driven aesthetic associated with forward-thinking bands from the Reagan era. “I’ve always loved ’80s music of all types,” she explains. “My favorite bands in high school were Depeche Mode and Oingo Boingo.”

This inclination toward ’80s-style retro-futurism can be heard in McDuffee’s collaborations with synthwave artists like Mitch Murder and Moonrunner83, while some of her darker and more experimental tendencies are funneled into in the tense and atmospheric music she writes to accompany trailers for horror movies. But increasingly, McDuffee is finding a home in the world of game scoring. Her latest game soundtrack is for a forthcoming tactical shooter called Hostile Takeover, from the one-man upstart studio Whispering Spider Games. While the game itself has yet to be formally announced McDuffee’s pulsing, layered synthwave soundtrack serves as an extremely intriguing preview. We spoke via telephone just after its release.

What came first: your love of music, or your love of video games?
For me, definitely music. I started singing when I was in kindergarten. It went from there: I started taking piano lessons when I was eight. I always did talent shows and musical theater, and did some amazing choir stuff all the way through college. I got to travel with that, which was really epic. I didn’t discover video games until middle school. I was probably 12 or 13 years old and my dad bought a Nintendo 64. That was my first console. It still holds a dear spot in my heart. And I still play some of those games. Zelda: Ocarina of Time is one of my all-time favorites, and of course Mario 64 is great.

Were you paying attention to the music back then?
I paid attention in the sense that I really liked listening to it, and found it engrossing. But I didn’t make the connection that this was something I could pursue until much later.

But you went to school for music.
Yeah, my focus at the university, and beyond, was film-scoring-oriented. That’s something that I definitely wanted to do, and it kind of shifted a few years into my professional career. It was maybe 2014, and I wasn’t getting a ton of film work, but I was still playing video games and enjoying game music. I thought, “Why aren’t I doing video game music? This is silly.” The gears started turning, and I switched focus.

How did you first approach game music?
I decided that I wanted to get into game scoring, and I thought ‘Probably I should start at [the Game Developer Conference] and meet a lot of people.’ And I did that, five or so years ago. I wound up sitting next to a guy from Portland, Oregon. We talked before the ceremony started. He was working on a little app-game. He scrapped that game, but started working on a new one. Lo and behold, that was my first game, Mimic Arena.

Keeping your previous film experience in mind, was it like to jump into game scoring?
The obvious difference is that games are much less linear, from a composing standpoint. You have to keep in mind that things are going to loop and make a music arc that is not going to be annoying for people to listen to on countless repeats—but also interesting enough that people don’t get bored and turn off the music. Mimic was interesting because they wanted lots of little tiny loopable segments that could stack on top of each other and mix and match at random. So I had to keep everything in the same key and the same tempo, but keep the pieces interesting enough that they stood out from one another. So that was challenging.

You’ve also worked pretty extensively on horror movie trailers. What makes a good horror trailer?
It’s kind of nice in a way, because trailers are very formulaic; it always starts with an intro, a build, and a climax, if you will. Then the fourth act is even more of a climax, where you think the song is supposed to be over, but it hits you in the face some more. So I pretty much always follow that structure. Day-to-day I think about the weirdest noises I heard, and mess with them. Like “Oh, my blender sounds weird, I’m going to record that and I’m going to tweak the hell out of it and create a piece around that.” That’s the fun thing about trailers. Most of them end up sounding pretty similar, because of that structure—so finding unique sounds is a key to making any trailer stand out. I once recorded my treadmill at different speeds, and used that as a riser in one of my pieces. It made for a nice texture.

How do you separate the commercial work that you do from the music you’re making for yourself? Do you have any separation there?

That’s a good question. To be honest, I haven’t done a whole lot just for me. But it’s something I’ve made it a point—in fact I’ve made a resolution—to do this year. Everything I’ve done up to this point has been for something—for a game or a film trailer, or co-writing for another producer. Or singing on another project as a studio vocalist. I need to do something for myself! And the closest I’ve come to that is a new score I’ve been working on for [the game developer] WayForward [Technologies]. They basically knew what I liked to do, and their product fit that perfectly. So in a sense they hired me to make my own album. It was what I would do if I was just going to do a project for myself.

What can you tell me about that project?
I can only say that they’re looking to announce it this year, it’s going to be really fun and upbeat, and I did like 39 tracks for it. It was a large project. But I can’t say what the game is yet.

So how did you wind up working on Hostile Takeover?
It wound up on my radar via Reddit, of all places. I posted a little self-promo marketing in the game development classifieds on Reddit. I specifically noted my specialties, which were fantasy, horror, and sci-fi. I think I said something about cyberpunk, too, because it’s this awesome blend of sci-fi and dystopia, and a lot of times it [has] this sort of retro-futuristic aesthetic that I really enjoy. So a really nice guy named Tyler messaged me, he was a solo dude working on this game in his spare time. So the project took a while, because he was working on it slowly, and we kind of worked on it together over the course of a year or two. He slowly gave me things to work on as he was working on the game. It was definitely in my wheelhouse. We both thought it made sense to give it an ‘80s-ish feel, but also sci-fi. An Altered Carbon / Stranger Things vibe.

You’ve done some writing online about women who make game music, and about the gender disparity in that field and in film. Do you think it’s getting better?
Only in my personal networks. I feel like more women are connecting on social media and promoting each others’ work, so that’s heartening. Every time I go to GDC it seems like there are more women showing up to the audio awards—I think it’s growing slowly but steadily.

Do you have any sense of why the gender gap is so large in game and film music?
It’s something I’ve thought a lot about. And film music is really bad. You think games are rough, it’s ridiculous in film. I think it’s three percent of Hollywood films [that] are scored by women. It’s absurd. Only a handful of women have ever been nominated for best score. I think interest is some of it, and the lack of encouragement, especially from people that young women can look up to. Not to say that you need the same gender to mentor you, but it does help for a young woman to know ladies who are doing it and kicking butt. I love when random ladies online message me and say ‘You’re a composer, that’s so great, I’m having trouble finding women who do this.’ It’s cool to see those people coming out of the woodwork.

What does success look like for you?
I would love to continue along the current trajectory, which is focused on games, film trailers and developing myself as a solo artist. That’s honestly been a lot of my business for the past six months: being a session vocalist. I’m loving every second of it. I just got back from Canada; I was shooting a video up there for a week with my buddy Moonrunner83. That was the most fun and exhausting thing I’ve ever done.

I always end the column asking if there’s an existing game you’d like to re-score. Not because the original soundtrack was bad, but because you want to try something new with it.
That’s hard! I think I’d want to take a crack at Far Cry 3: Blood Dragon. I love that soundtrack, and I think doing something kind of similar but having my own spin on the ’80s style cyberpunky kind of flavor would be really fun.