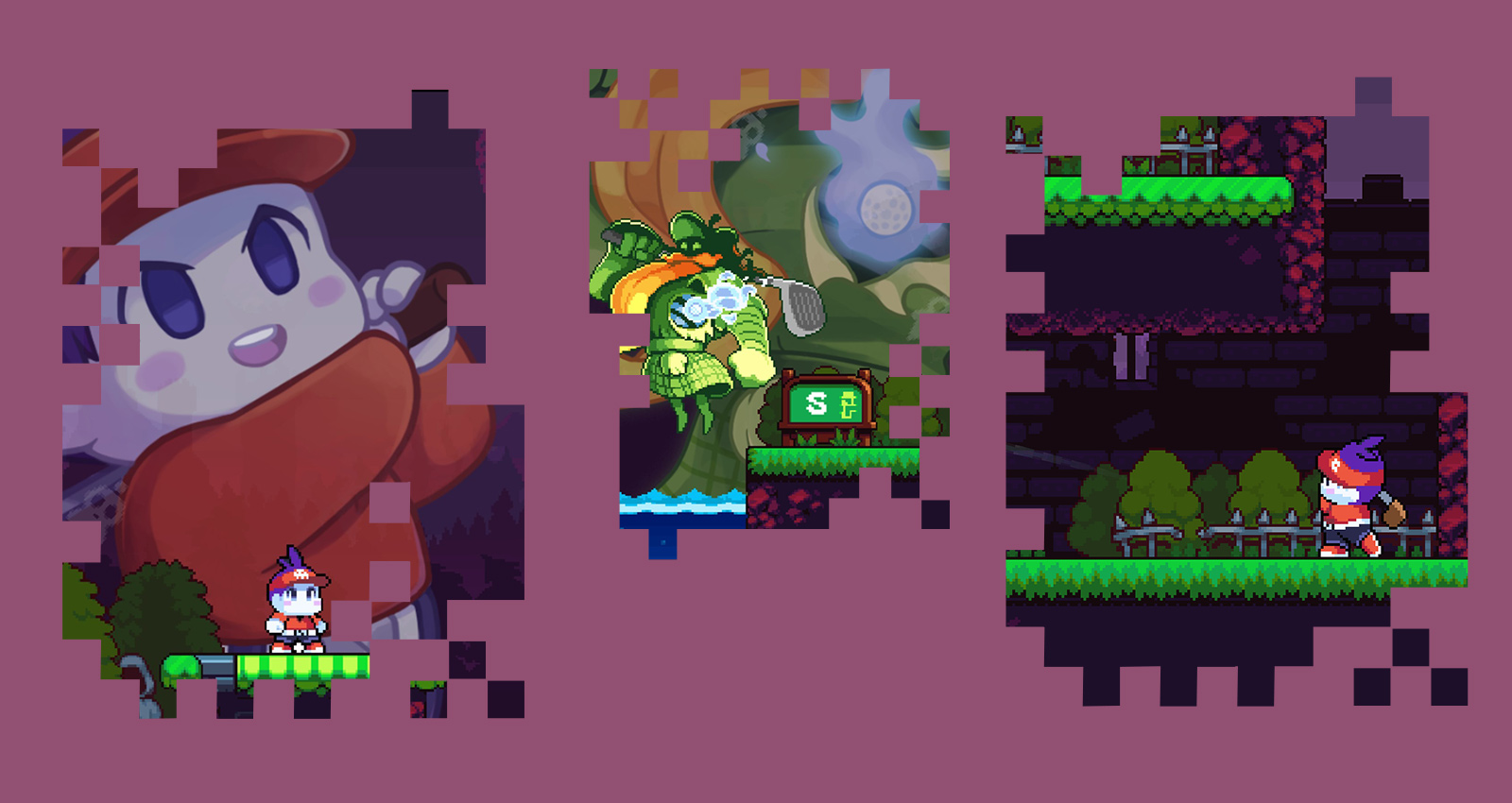 Mark Sparling’s path to video game music success was born out of crushing disappointment. Now 32 years old with an award-winning indie hit (A Short Hike) and a hyped new release (Cursed to Golf) under his belt, he’s living what he calls “a composer’s greatest dream.” But the path forward wasn’t always clear.

Sparling was in high school when he decided that he wanted to dedicate his life to making. A perfectionist by nature, he’d flaked on his childhood piano lessons—“They were a waste of time for everybody,” he remembers—but picked up guitar around age 12, impressed after seeing a friend play classical guitar. It would soon become an obsession. The quiet teen was drafted into half-serious metal bands in high school, but what he really wanted to do was study guitar at the highest level. At his music teacher’s urging, Sparling applied and was accepted into the prestigious (and nearby) Humber College. It turned out to be exactly what he was looking for.

“It was being thrown into the deep end,” he remembers. “It was a hardcore program. There was pressure to practice a lot, to transcribe all the time—to basically have very little social life or anything outside of music.” For Sparling, who describes himself as shy and introverted, “That was all I really wanted.”

At Humber, learning music meant learning jazz. “Jazz, at least for me, doesn’t really lend itself to perfection,” Sparling says. “You’re going to make mistakes, and a lot of it is turning those mistakes into your next jumping-off point.” Despite the discomfort that can come with improvisation and a deep anxiety over performing live, Sparling thrived at Humber. He spent his time listening to John Coltrane and Bill Evans, as well as contemporary guitarists like Kurt Rosenwinkel. He soon fell in love with jazz.

It was in his third year of college that Sparling began to develop tendinitis in his left hand. He played through it, chalking it up as a minor annoyance. But it gradually grew more debilitating. “I had this realization that I couldn’t practice as much guitar as would be required to pursue this as a career,” he says. “Even going to music lessons with some of the amazing teachers, I felt like I was letting them down.”

Video games had always been a part of Sparling’s life. He played Sonic 2 with his dad as a kid and fell in love with the music of Final Fantasy X in his early teens. When faced with stresses of college and the growing dread over his future in music, Sparling relaxed with rounds of Super Smash Brothers with his college roommate, or by going home to watch his brother play through Skyrim and Ni No Kuni. Sometime in his senior year at Humber, he realized—while kicking himself for never taking any music production courses in college—that there may be a future in game music.

Like everything he approaches, Sparling approached breaking into game music with a kind of systematic relentlessness. He listened to game soundtracks from the 1980s and ‘90s, both beloved and obscure, until he exhausted entire libraries from classic home consoles. He played all the indie games he could find from Toronto-area developers like Capy and Drinkbox, relying on “more extroverted” friends to occasionally make introductions. Crucially, he attended local game jams, where small teams built games from scratch over the course of two or three days. Sparling scored his first soundtrack at Toronto’s TO Jam in 2014, with a single-song contribution to the absurdist pixel-art battle titled Gentlemen, Drop Dead. The game, in which two mustachioed adversaries are dropped from an airplane for a mid-air duel, was right in his wheelhouse. “I know what ragtime sounds like,” he thought. “I can handle this.”

Game jams gave Sparling his first practical experience in the industry, but he still felt woefully behind his peers when it came to music production. So in the summer of 2016, inspired by the work ethic of digital artist Beeple, Sparling began writing, recording, and releasing one song per day. He’d continue the project for nearly four years. The time limitation, combined with the inherent limitations of the chiptune programs he used to record the songs, helped him grow as a songwriter as well as a producer. “It’s really easy in a [modern digital workstation] when a song isn’t feeling right, to just add horns, add strings, add 16 other things,” he says. With programs like Fami Tracker and LSDJ, though, “I can’t dress it up,” Sparling says. “I can’t hide. I only have three melodic channels and a noise channel.”

Within the first year, releasing a song a day earned Sparling Twitter retweets and invitations to soundtrack small projects. His “say ‘yes’ to everything” approach meant taking on far-flung projects from around the world that tested his stylistic range. In early 2019, he got a proposition that thrilled him: A Toronto-area developer named Adam Robinson-Yu, a friend-of-friends with whom Sparling had once collaborated at a game jam, needed music for his new project. He needed it within two or three months—an insanely fast turnaround time. Sparling, of course, had a lot of practice in working quickly.

The game, A Short Hike, was a pint-sized narrative adventure about Animal Crossing-esque characters making their way around a vacation island at a leisurely pace. Wistful without any cringey sentimentalism, adorable but not twee, it desperately needed music with both sweetness and subtlety. Sparling’s music—both his warmest and most understated work to date—would more than fit the bill. The main theme, “Beach Buds,” is lullaby-like and a little jazzy, led by an acoustic guitar that brings Sparling’s entire music career full circle. “Snow, Lots of Snow” is a twinkling and otherworldly piece with a real sense of mystery. “Somewhere In the Woods,” which originated as a melody Sparling reworked from one of his daily song projects, is a polyrhythmic romp with a clear-eyed piano lead that’s become his most popular song on streaming platforms. What’s more, the songs create a seamless musical map of A Short Hike’s landscape, shifting in tone as the player traverses the island.

Early reactions to the soundtrack, which Sparling says was composed using “a lot of intuition,” were positive, but neither Sparling or Robinson-Yu could have predicted that it would slowly grow into a full-blown cult classic, or that it would stockpile awards, including the prestigious Grand Prize (and the Audience Award) at 2020’s Independent Games Festival.

For Sparling, A Short Hike was the kind of success that could transform a passion into a full-blown career. “Everything I’m working on now, I can chalk up to A Short Hike.” That everything includes music for the Roblox game Adopt Me! and a forthcoming project that’s loosely inspired by the Studio Ghibli film Kiki’s Delivery Service (1989). Sparling’s latest release, though, is one with the makings of another slow-rolled indie hit.

As indie games go, Cursed to Golf could not be more different than A Short Hike. It’s a high-concept combination of its titular sport and the die-often genre dubbed Roguelikes, with precise pixel-art reminiscent of Ghosts and Goblins. As the player attempts to free themselves from a seemingly endless golf purgatory, they’re encouraged (and sometimes stressed out) by a funky, wobbly, chiptune-adjacent Mark Sparling score.

For a game that combines Castlevania and Mario Golf, “it was a cool puzzle of how-do-you-marry-these-two-genres,” Sparling says. His first stab at the marriage was heavy on distorted guitar, but “it was just going too hard.” He listened to music from older golf games like Neo Turf Masters, Mario Golf, and Pangya, and even watched clips of classic PGA tour coverage. In the end, though, intuition again ruled the day.

“It’s sort of getting back to my roots, it’s classic video game music,” Sparling says. But if Cursed to Golf nods to the soundboards of classic consoles like the Sega Genesis and Super Nintendo, it’s also layered and dramatic: the combination of breezy melody and teeth-grinding intensity that haunts tracks like “Spirits on the Slope” and “Grit on the Green” (the album’s tracklist employs alliteration aplenty) can put the player in an almost hypnotically competitive state. There are also moments of release: peaceful downtime tracks like the bossa nova/Scottish Highlands-themed “Caddy’s Shack,” and an end-of-game song (“RIP”) that’s so smoothly funky one almost looks forward to losing the game.

Cursed to Golf is at its most extreme in its high-energy boss-battle tracks, which salvage Sparling’s original conception of the game’s music by reworking level themes with chunky electric guitar and heavy metal-style percussion. “Scramble in the Sands” is equal parts cosmic and primal, recalling the high-octane themes of Sonic Adventure, albeit without losing the lo-fi thread that runs throughout the game’s tracks. It’s in these moments that one imagines Sparling as something of a video game madman, seeing just how disparate a palette he can get away with. Which makes sense, given his unique background in metal, jazz, and games.

There were a lot of detours that led to Mark Sparling making video game music, but he’s found his calling. “I spent the majority of my 20s just wanting to get…here, for lack of a better word,” he says. “So the last few years I’ve just been enjoying that, and not thinking too much about the future. I’m still figuring things out, discovering new things. I don’t see myself leaving it for anything.”