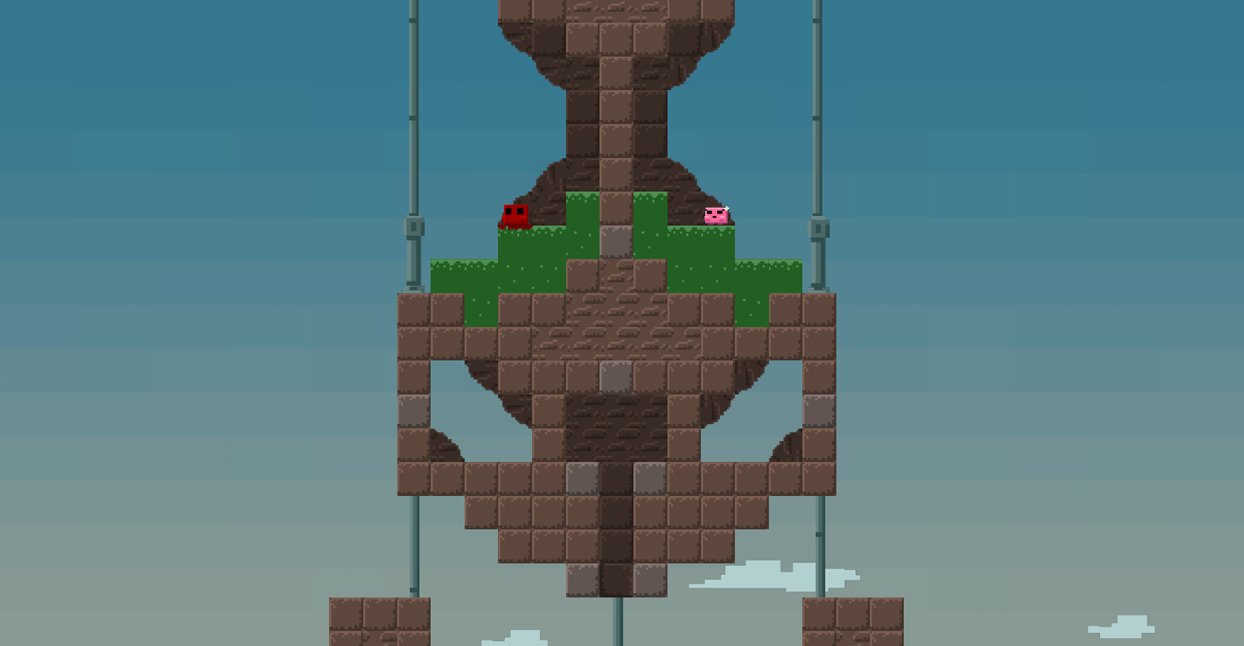 Danny Baranowsky’s game soundtracks are intense, bombastic, and most importantly—fun. The music he writes is consistently lighthearted, something that anyone who has had the pleasure of playing Crypt of the Necrodancer—which is built around Baranowsky’s compositions—knows well. The Seattle-based composer and musician, who is perhaps best known for scoring Super Meat Boy, has worked on a diverse set of games, including a number of mobile hits like Canabalt and Tapinator’s recent Rocky game. He has also collaborated with his friend, game music legend Grant Kirkhope (Banjo-Kazooie and Civilization: Beyond Earth), who he lovingly trolls at the end of this interview. Here Baranowsky discusses Cakewalk, the subtleties of loving film and game music, and the thin line between exhaustion and procrastination.

What came first for you as a passion: video games or music?

Video games. My first memory is watching my brother play Super Mario Bros. on a black and white TV.

Where did you grow up, and what effect did that have on your musical tastes?

I grew up in Mesa, Arizona, which was kind of a cultural black hole. All of my influences really came from video games and the internet.

What was your introduction to playing and recording music? Did you know you wanted to work on game music early on?

I messed around with Cakewalk on my mom’s computer in fifth grade, and transcribed ‘Good King Wenceslas’ from glockenspiel sheet music. I made a little techno remix version with terrible gunshot sounds and helicopter noises, and that was technically my first electronic music song. I didn’t really realize you could even work on game music for a living until about three months before I got my first paid gig.

The Super Meat Boy soundtrack was the first place a lot of people became familiar with your music, and it’s a very diverse collection, from guitar rock to 8bit-ish stuff to really tense and lush electronic compositions. Can you talk a little about the working process? The game is sort of postmodern and crazy—what were your inspirations for the music?

The original Meat Boy just used music that I had written and had laying around that the developer asked to use it. The first tracks for Super Meat Boy were remixes of those tracks, so a lot of the inspiration for the Super Meat Boy music was not the game itself, but just musical ideas I had had years before that had been reinvigorated and adapted to the rhythm and speed of the game. As far as inspirations, the aesthetic was always guided by a feeling of nostalgia and callback to all video game music I had ever heard, but mostly Mario, Mega Man, Contra, Rocket Knight Adventures, Sonic, etc.

Did that game open a lot of doors for you as a working musician?

Yea, having a soundtrack on an Xbox game internally validated what I was doing, and when the album sales kept coming, it helped me believe it was a sustainable career. I’m sure it got me on people’s radars, but with hindsight, I think the relationships I forged with people were probably much more important than one single game.

I thought Binding of Isaac’s music had some Danny Elfman vibes, and you worked on a short film called Parallax some years ago—do you often look to film composers for inspiration for game projects? Any movie soundtracks that stand out as special for you?

I initially wanted to be a film composer, but I painfully realized that, unless you are Danny Elfman, it’s not a very practical source of income. Since I’ve been writing music for games for a while, I’m definitely not as interested in film soundtracks because they’re static and they don’t score a potential set of events. It’s not that I dislike them, as there are countless amazing soundtracks that do wonderful musical things outside of the bounds of genre restrictions. Some of my favorite movie soundtracks are Gladiator, The Italian Job, The Nightmare Before Christmas, Star Trek: First Contact—it all feels kind of arbitrary, because I don’t really have a rubric for soundtracks and it’s so heavily influenced by whether or not you like the movie, which I imagine is how game soundtracks are, too. I have a hard time being a fan of any one composer, because they might be tasked with writing a kind of music that I just don’t like, so it’s different in that sense than liking a band or a musical group. Bands usually can maintain a certain aesthetic and explore it and direct it over the years but film and game composers have to work with what they’re given, and put their genre preferences to the side.

I think it’s pretty simple: remember that melody is king, prefer harmonic progressions that are complex without being overwrought, and don’t forget dynamics. For looping music, especially, layering is crucial—the player will hear the music so many times that there needs to be something new for them to hear each time.

Dynamics are something I think a lot of people forget about. Even with high energy music, you have to give the listener a balance between intensity and rebuilding. That’s not only to give the ears a break, but to give an emotional lull that oscillates at the same rhythm as the gameplay itself. I think one of the most important things about being a game composer is understanding the emotional content of gameplay, and figuring out how to write music that resonates with that content.

Music is a totally integral piece of the Crypt of the Necrodancer gameplay experience, so players are focused on the music and the rhythm in a really heightened way. How involved were you in the development of this game, and how did you feel about your songs really serving as a centerpiece to the game in this intense way? Was that exciting or terrifying?

It’s a rare pleasure in game music for the soundtrack to be the centerpiece of the game. Definitely more exciting than terrifying! I had been writing for long enough to feel like I knew what I was doing—and I like being the center of attention—so I really just went at it full speed ahead, and Ryan (Clark, developer of Necrodancer) just reeled me back when he needed to. We’ve got a really good working relationship at this point, where he knows when to calm me down and when to get out of my way. I came up with the Singing Shopkeeper, and I had continuing feedback on a lot of elements of the game. It’s still weird to say that I helped developed Necrodancer, but I guess it’s true! Based off of that experience, I’m doing actual game design with Ryan now for our next game. So I guess I did alright!

Has criticism or praise from fans ever altered the way you thought about your own music?

Absolutely. I think it’s impossible for any kind of artist these days to escape it. I’ve definitely read feedback that made me embarrassed of something that was poorly executed or half-assed on my part. In that sense, it was actually constructive, even if the tone was not actually constructive. I think I’m like most artists, where I’ll read a thousand positive comments and the one negative comment will be the only thing that I think about. I’ve never crossed over into being ashamed or disappointed in my music, but if you find yourself trying to convince yourself that they’re wrong instead of it just rolling off your back, I do think it’s important to consider that what they’re saying might have some weight.

Can you tell us about any forthcoming projects you’re involved with?

Necrodancer DLC is coming soon, and Necrodancer vinyl LPs should be out in the next couple of months from Ghost Ramp. Then there are secret mysterious games coming from Brace Yourself Games with my music. You may also be able to wear my face on your chest soon. I’m working with Ghost Ramp on merchandise, which will never not be fuckin’ weird to see my face and my name plastered on stickers and buttons and shit. But hey, this is the age of micro-celebrities!

Do you have any advice for would-be game music composers?

Probably the most common question I get, and the best answer has always been and probably will always be: get good, work hard, meet people, and hope for lightning to strike and be ready for it when it does.

Aside from that, get a contract, and don’t work with anyone who gives you grief for wanting one. If someone tries to hire you without a contract, just remember that they can Darth Vader that deal any time they want.

And work hard, but not too hard. I believe creativity needs time to breathe, and if you write music all the time, your shit is going to start sounding similar and there’s nothing that you can do to stop it. Obviously fiscal realities might make this a tricky one, but I firmly believe that you can do better work that will be more well-received if you aren’t cranking out tunes every day. I don’t agree with “write music every day.” Music comes from your emotional state of being and if you’re overworked and exhausted, that will come through. Procrastination is a real problem that should be addressed and controlled, but sometimes you genuinely can’t force it.

What’s an under-appreciated game soundtrack you’re in love with? Why do you love it?

Assassin’s Creed IV: Black Flag. It delivers on the swashbuckle-y, pirate-y premise with ties to the modern day meta-narrative, but never forgets to have fun when it needs to.

If you could go back and rework the soundtrack to any existing game, what game would you pick and why?

Banjo-Kazooie, because Grant Kirkhope is a hack and he couldn’t arrange his way out of a wet nappie. (I don’t even know what a nappie is, I think it’s a diaper. The point is Grant Kirkhope smells like a church sweater and has the reflexes of a suffocating tortoise.) Just kidding, I love Grant, he’s going to be a groomsman at my wedding—what was the question?

Oh yeah, in another universe, I would have liked a shot at Tetris Attack for Super Nintendo. I really appreciate the character-centric stage themes in a block-based puzzle game. Just seems like a challenge I’d like to take on. Grant still smells, though.