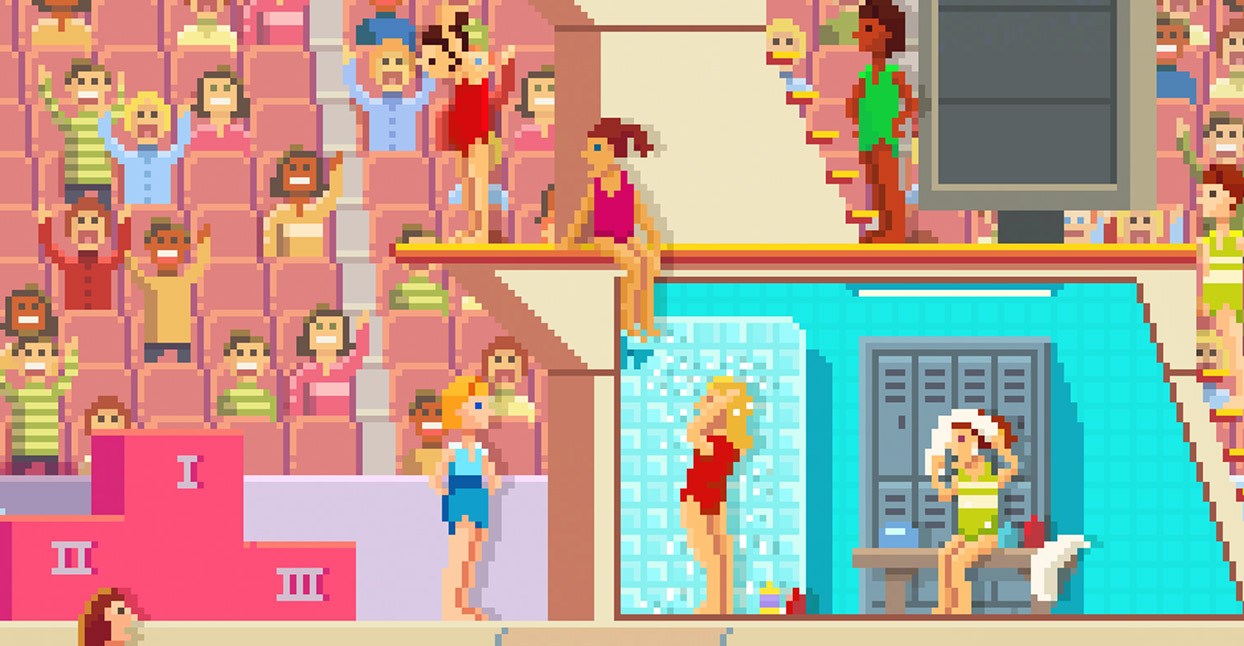 Ben Prunty began designing his own video games as a kid in Maine, at a time when that was kind of a weird thing to do. When he was a teenager, he built entire RPGs on his TI-83 graphing calculator. He dreamed of a career as a game developer, and when he wasn’t busy creating primitive games, he was dabbling in electronic music. Eventually, Prunty found a way to combine his two passions. Fifteen years ago, he moved to California to be closer to the game industry—not to become a designer, but to become a musician.

It wasn’t until 2012 that he got his break, with the meticulous space-fighter/resource management game Faster Than Light, which would become an indie hit—as would Prunty’s sprawling, orchestral-chiptune soundtrack. That game opened doors to new projects, cementing Prunty as a top-tier game musician. “It made my whole career,” the 36-year-old says. “If it weren’t for Faster Than Light, I’d probably have given up by now.”

We spoke to Prunty via email about ’90s electronica, his latest soundtrack, Photographs, and how his recent ADHD diagnosis has changed his life.

What came first for you: A love of video games or a love of music?

Definitely a love of games. As a kid and as a teenager, I was a voracious consumer of pretty much any kind of game I could find. I bought one of those 10-disc collections of shareware for $15 at Software Etc. that said ‘750 GAMES!!!’ on it, and tried every single one. I rented Super Nintendo games whenever I could. I’d play everything on game magazine demo discs every month. I would find old LCD games from the ’80s at flea markets and play those. I didn’t care how old or bad a game was; I had to see everything. I’ve only recently started to realize how hungry for games I was back then.

One of your earliest big projects—the Faster Than Light soundtrack—was a hit, and the music is now widely beloved. Can you talk a little about how you wound up working on that project?

I started making music around 1999 at age 16, and Faster Than Light came out in 2012. So while it was my first big hit, it wasn’t my first project by far. This is the main reason why the music was good: I had a lot of experience as a composer already.

By 2011, I had made music for many canceled games and small student projects. I was cold-emailing every game developer I could find, to no avail. I was telling literally everyone I knew that I was making music for games. One day a friend of mine said to me, ‘Hey, one of my college friends is making a cool space game. He’s looking for music, and I told him you were making music for games. Do you want to check it out?’ That game was Faster Than Light.

So there was an enormous amount of luck involved in my success. But I was also ready for it. In just a weekend, on short notice, I was able to put together a piece of music that fit the game really well. I never could have done that if I didn’t already have 12 years of music-making experience behind me.

Was there a difference in working for Faster Than Light’s developers, Subset, on their second game, Into the Breach?

Everything felt different. I was working in a genre and style that was mostly outside my comfort zone, and it took almost a year of experimental composing just to find it. So not only was I following up on Faster Than Light, I was doing so with a completely different musical take. It was the hardest project I’ve ever worked on. In the end it did well, and I’m really happy with how it came out. A lot of critics loved it, but didn’t know how to categorize the music—which to me means I succeeded in creating a new kind of genre. Regardless, it didn’t have nearly the same emotional reaction from fans as the FTL soundtrack did.

Now that you have a lot of projects coming your way, how do you decide what you want to work on? What factors play into that decision for you?

The very first thing I do is find learn about the developer. The most important thing is finding kind, creative, collaborative people to work with.

The next thing to look for is the developer’s work. Have they made interesting games already? Do they make quality work? Have they shown that they can finish projects?

Once all that is established, the decision comes down to the project itself. If it’s a space game, I tend to say ‘no,’ even if the team seems great. I got kind of pigeonholed as ‘The Space Game Music Guy’ for a couple of years after Faster Than Light, and so now I try to avoid that. And then I ask: Does it look like a cool, interesting game? Does it have a strong visual identity? And most importantly, could I actually make music for it? If a game’s style calls for a full jazz soundtrack, I’m not the guy for it.

I really hope to someday make music for a more emotionally-driven, story-based game. I want to work on something that has characters that players identify with and love. The kind of game that inspires loads of fan art and fan fiction. That’s the kind of musical-emotional challenge I want.

Tell me a little more about how you approached your latest game, Photographs?

Luca Redwood, the developer of Photographs, asked me to use my own Color Sky album as an inspiration. The game is divided into five standalone stories. I wanted each story to have a very different vibe, but still be in my style. So I didn’t try to emulate any specific genre: I just make music that comes straight from my own weird brain. Photographs is a great example of music that’s very close to what I would make in my own time: melancholy melodies, a strong sense of rhythm, using a mix of synthesizers and odd found instruments. It might be my best work.

I’ve seen you cite Danny Elfman as an influence in a few places online. Who else has been a career-long inspiration for you in your work?

I listened to a lot of bad German trance as a teenager—it was the mid ’90s—so that influenced me a lot, whether I like it or not. But the things that influenced me most directly were video game soundtracks and electronic artists from the era: Orbital, William Orbit, Aphex Twin, Underworld, and Daft Punk. I am also possibly the actual biggest fan of Star Salzman, an artist I discovered through the video game site OCRemix when I was in my 20s. His style has informed a lot of my work.

You’ve talked about living with ADHD and about how we should fight mental health stigma by talking more openly about it. What can you tell me about your own diagnosis, and about how ADHD affects your creative process?

I was diagnosed with ADHD only last year, but I’ve definitely had it my whole life. I did very poorly in school. I failed a lot of classes, got in trouble a lot for interrupting class, and ended up being put in the slow-paced classes. I actually mostly enjoyed school, I was just really bad at it.

At home, I was taking apart computers, learning to program, designing games, reading science books, and teaching myself music production. But because learning on my own wasn’t recognized academically, I totally believed I was just lazy and slow-witted. It never occurred to me, my parents, or my teachers that I might have some form of ADHD, so my failure in school was just seen as me not trying hard enough.

A few years ago I read Hannah Hart’s autobiography Buffering. In it, she described her own school experience and how it led to her ADHD diagnosis. Her school experience matched mine almost exactly. Curious, I read a book on ADHD that she recommended, Driven to Distraction by Edward Hallowell. The book spoke to my experience so comprehensively and re-contextualized my life so completely that I actually started crying while reading it at one point. So I talked to my doctor about it, took some neurological tests, tried a couple of different kinds of medication, found a psychiatrist, and now I’m learning to live with it and work around it. I take a low dosage of Adderall on workdays and it helps me tremendously.

I can normally only concentrate on something for about an hour at a time. But now that I take Adderall, and now that I understand my own brain better, I’ve been able to focus on things for hours at a time. This is honestly one of the greatest feelings I’ve ever experienced. To be able to get completely absorbed in something I love, without constantly having to think about other things, is a miracle. I’m incredibly grateful for the treatment I’ve received.

OK, last question: If you could re-score any game—not because the existing soundtrack sucks, but because you think the game would be a unique challenge or you have some original idea for it—what game would you pick and why?

It’s hard for me to get excited about or even wrap my head around the idea of writing for something that already has a soundtrack. That said, my current project is Subnautica Below Zero, a follow-up to a game that I did not work on, but that is one of my all-time favorites. So maybe I’m literally doing the thing you’re asking about? Nailed it!