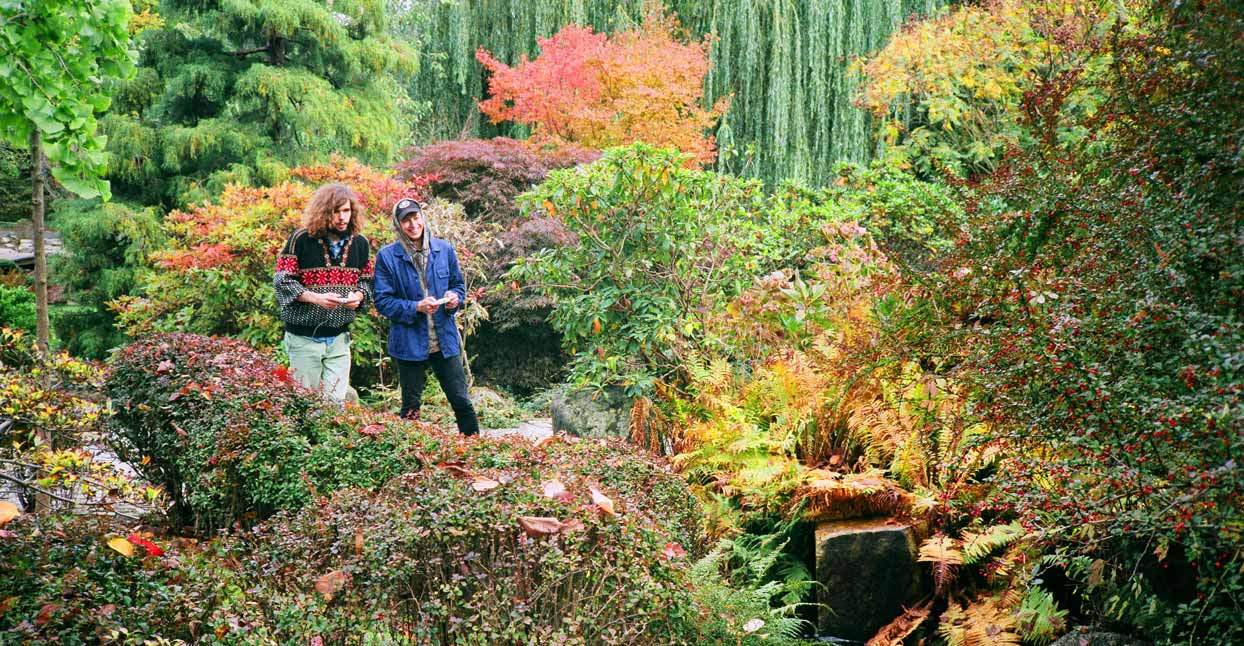 High Scores is generally a column about video game soundtracks and the artists who compose them. This month’s installment bends the rules a bit, with a duo who love video games so much that they dreamed up their own imaginary role playing game for the sole purpose of soundtracking it: Gaijin Blues. It’s the brainchild of Paweł Klimczak and Michał Szczepaniec, two Polish musicians who—after taking their own trips to Japan in 2016 and 2017—returned with bags upon bags of records, inspired to start a project of their own.

Klimczak, a DJ and producer who often tours and records under the name Naphta, met Szczepaniec (A.K.A. PlayStation Yoga) while mixing a pop album for the latter’s old band. They became quick collaborators and friends, but it wasn’t until their respective Japan trips that they started work on Gaijin Blues. “We were sitting down and listening to the records that we brought home, and we found some amazing sounds there,” Klimczak says. “We thought about recording a special DJ set, but instead we’ve channeled those inspirations into something completely different.”

Gaijin Blues is definitely different. Their 2017 debut EP layers sampled traditional Japanese instrumentation over hypnotic live drums and flute, using dance club beats as connective tissue. Song titles point to the duo’s unabashed love for games, especially Japanese role-playing games: “Cafe LeBlanc” references a chill spot in Persona 5; while “Guardia Castle” is so named for a dramatic Chrono Trigger locale. But with their new LP Gaijin Blues II—an album written for the imaginary game of the duo’s own invention—Klimczak and Szczepaniec dive into something that’s both more ambitious and more cohesive than their early work. These are complex, moving compositions focused on evoking a sense of grandeur. The liner notes, which walk the listener through the imagined RPG in detail—each song represents a new area or conflict, and lines like “use the drumstick sword” abound—only make the project more endearing. Bandcamp spoke to Klimczak (who is also a music and pop-culture journalist) in a series of emails.

You are two self-described nerds from Poland. Where did your obsessions with Japanese role-playing games start?

Since we were kids, we were fascinated by Japanese pop culture. Anime was first; Polish TV  was showing Dragon Ball, Captain Tsubasa, Sailor Moon and other basic stuff. But we had some brushes with manga as well. Then there were games: Michal through Nintendo handhelds, Pawel through Playstation and later on, Super Nintendo emulators. Our passion for JRPGs grew only stronger with modern titles like Persona 5.

And how did you come to love Japanese music?

We’re always looking for sounds, rhythms and melodies that will broaden our musical taste and knowledge. Japanese music—not only traditional music but disco, ambient, jazz, power metal, J-pop—has this amazing quality. It has technical proficiency and detail, and is usually really powerful, emotionally. Sometimes subdued and subtle; sometimes [it’s an] all-out glorious cheese-fest. We love it all.

You mention trips to Japan in your biographical information. What inspired those trips and what was the focus of them?

Michal was visiting Japan as a tourist, and Pawel was touring as a DJ. It’s funny, we both had the same focus when we were there: record stores and nerdy places like arcades and gaming shops. Obviously we had both wanted to go there for years, as it turned out, for the same reasons. We were both after very specific music: Michal was hunting for pop and disco, Pawel traditional and children’s music. Needless to say, some video games were brought home as well.

“Gaijin” means outsiders or non-Japanese. Do you feel like outsiders? And is there any stigma still attached to nerd/otaku culture in Poland?

A little bit, yeah. But since the nerd culture in general became mainstream, it’s much better. Even rappers are sporting anime t-shirts, jocks are running around in Star Wars merch, Dungeons & Dragons and Magic: the Gathering are breaking records. We were bullied for that shit in school. We’re grown men now, so nobody will beat us up for reading manga on a train. There are also a lot of people here who are really invested in Japanese culture, pop or traditional. It’s an endearing community, very diverse socially and age-wise, and their commitment is very honest and engaged.

What are some game soundtracks that have really inspired your music, either directly or indirectly?

Classic stuff: Chrono Trigger, Secret Of Mana, Final Fantasy (especially VI-IX), the Phantasy Star series. Yasunori Mitsuda’s work is especially close to our hearts: “Wind Scene” from Chrono Trigger might be one of our all-time favorite pieces of music. When it comes to melodies, Shoji Meguro’s work on Persona 5 was very influential on our approach to composing hooks or ear-wormy bits. And nobody builds an epic-yet-transcendental feel like Keiichi Okabe (Nier: Automata). But Gaijin Blues is more about the whole atmosphere of these games, [the] emotions they evoke, not just the music. For us, they’re like [a] cozy blanket that we can wrap around ourselves. Not to mention the impressive, wholesome, tragic or ecological stories they are bringing. We hope that Final Fantasy VII remake will rehabilitate some eco-terrorism. In the face of climate catastrophe, it’s just what we need.

On your first EP, you were paying tribute to games without playing game music, per se.

Our main goal with the EP was to blur the lines between samples and live instrumentation, to present the sounds we found on the records in a different context. The music came first; the concept of channeling our nerdery came after that. It was completely opposite with the Gaijin Blues II album, though.

So the concept of creating an imaginary game soundtrack came before the music of Gaijin Blues II?

We had some musical ideas, but the story came first and organized the way we were writing and recording the tracks. Knowing precisely what kind of emotions or atmosphere we wanted to create really streamlined the process. And then the details of the story were worked on at a later stage, when we assigned characters or events to particular melodies or sounds.

Who wrote the story behind the game, and was it directly inspired by any particular RPGs?

We worked on it together. There are some borrowed elements, nods, and references. It’s better to leave the hunt to the listeners! The ecological message is there for a reason. Music might be a lighthearted affair, but our real world is screwed. Thus the bittersweet ending: the last track on the album is a victory at a high price. Some people will survive, but the world as we know it will not.

It’s clear that this sound—big and propulsive and often dance-club friendly—wasn’t just inspired by games. Who (or what) else has influenced your sound?

Mostly a variety of sounds from the U.K., from funk to dubstep. Juke/footwork was a huge influence as well. We love modern club music and its possibilities, especially when it comes to shaping huge, impactful sounds and dramatic structures. The rhythm is a crucial thing as well; we are both huge fans of interesting grooves and left-field beats.

It sounds like you worked with samples on “Bahamut.” What’s your philosophy on sampling, and where did you find the vocal sounds that come to the surface here?

We used to start with a sample and build a track around it. We were trying to add enough live instrumentation to blur the line between the sample and a new recording. “Bahamut” samples traditional music, with the drums, synths, and guitar played by us. Now, we are trying to start with our own ideas, and use samples as a crutch—but yeah, nothing beats a good dig, and finding that golden loop!

“Leaving Schwarzwelt,” is the most chaotic, and perhaps the most videogame-y track on the album. It’s a very timed-escape / boss battle sort of music. What did you do to increase the tension and chaos here?

Drumsticks on the bongos! Live drums play a huge part in Gaijin Blues’s sound: we use congo and bongo drums, floor toms, hi-hats, rides, rainsticks, chimes… we love to layer them and weave them into our tracks. This way we can get more organic feeling and a sense of progression, even in more loop-oriented songs.

If you could re-score any game from any era, what would that game be and why?

Phoenix Wright: Ace Attorney! The existing music is perfect, that’s for sure. It builds the tension and atmosphere of the scenes. Masakazu Sugimori and Akemi Kimura did an outstanding job on that, it’s a shame that the music is not consistent throughout the whole trilogy. But modern production could pose an interesting challenge. It would be easy to overdo it, make it too epic. However, finding the right themes for the characters and dramatic scenes would be an amazing experience. Modern games apply these impressive, complex systems when it comes to triggering the music. Working on something so limiting could be very challenging and inspiring.