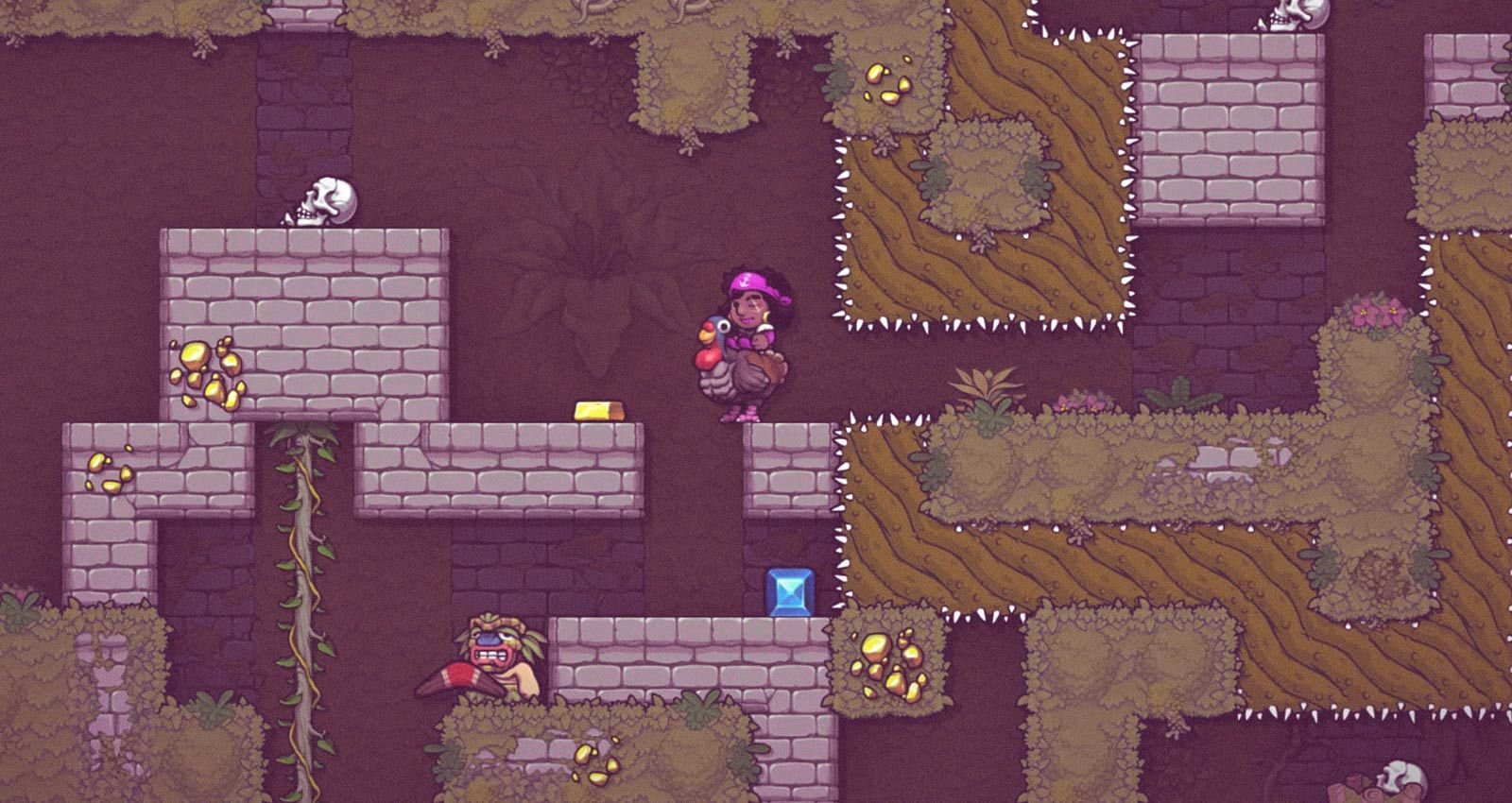 Norwegian composer Eirik Suhrke is probably best-known for his soundtrack to the brilliant 2012 action-platformer Spelunky, one in a small handful of critically lauded titles that reinvented two-dimensional platform gaming for a new generation. Suhrke’s Spelunky score, sometimes overshadowed by a game that reinvented the rules, served as a bridge between gaming worlds. Most of Spelunky’s melodic songs have pronounced, earworm melodies that sound a lot like blasts from gaming’s past. That instant familiarity is almost enough to distract from the fact that Suhrke is playing with everything from fidelity to time signatures, transforming catchy game themes into pocket-sized jazz odysseys.

Eight years—and many memorable soundtracks, including acclaimed mobile hits Ridiculous Fishing and Downwell—later, Suhrke’s second crack at Spelunky music has finally arrived. For the long-delayed Spelunky 2, though, Suhrke threw out his own formula for making tightly knit songs with an entirely new process: One that mirrors the game’s own procedural level generation. The result is a deeply hypnotic, globe-trotting collection of music that feels as ambitious and surprising as Spelunky 2 itself. It is one of the year’s best game soundtracks. We talked to Suhrke via telephone about black metal, self-criticism, and writing music that can write itself.

So were you a music kid or a video game kid?

I don’t know if I could choose one or the other. From a very early age I had a guitar and an NES.

What kind of music were you first enamored by?

Video game music was for sure an early influence, but also metal. Metallica was the first band that I was super into, even in preschool, from having an older brother who would essentially tell me what we liked. I was born in ’88, he was born in ’83, so a lot of my influences for music and movies are a little before my time.

Isn’t metal sort of a national pastime in Norway?

I suppose. Actually, black metal originated from exactly the part of Norway that I’m from, from my little part of the suburbs. Being a metalhead is definitely not out of the ordinary here. Although I personally listen to some really messed-up shit that is definitely not normal. I generally like metal to be really ugly-sounding and scary-sounding.

Were you consciously listening to the music in games as a kid? Did game music make you feel unsettled?

I was definitely conscious about it, because I remember trying to figure out melodies from games on piano, or humming game music. It was often sad tunes. I remember thinking about the music in Street Fighter 2. It’s a fighting game, but some of the music feels kind of sad. Especially in the Super Nintendo version, where some of the instruments are slightly out of tune. It gives it this strangely wistful vibe.

You are a self-taught musician. Did you have imposter syndrome at all, entering the commercial world of game music?

My work scaled up over a long time. I think my first released game was like 15 years ago, a small freeware thing. I went from indie games to bigger commercial ones. I don’t know if I have imposter syndrome, specifically, but I will admit that I’m not particularly satisfied with anything that I’ve done, including Spelunky 2. When I put it under the microscope, there’s a lot of stuff I feel like I could and should have done better.

Do you wish you could just let that go and be fully happy with your work?

I guess it’s a double-edge sword. I don’t think artists ever really should be completely satisfied. At that point, you’re done. It’s good to be a little critical. I think what it really comes down to is being able to distance yourself from your art: To not dislike yourself just because you’re not satisfied with a piece of music or whatever. I think I have gotten better at that. But I also truly feel like there’s really room for me to do something that I would be completely satisfied with. I think it’ll be something darker, more wistful, stranger. I’m really curious to explore that.

Is there a game soundtrack that got closer than Spelunky to representing your style?

The Downwell soundtrack is probably the closest to home. When I was first hired to do the game, Ojiro Fumoto, the lead developer, asked me for essentially Mega Man 2-style music. Something really bright and motivating. I essentially told him no. I was feeling really cocky at that point: I had just gotten word we were starting up Spelunky 2. If this guy didn’t want my dark chiptune stuff, he could go find someone else. But as soon as I sent him some music, he was super into it, and I think he was glad we went that route.

So there’s this cool opening sound in Spelunky 2 that is just this big, “Let There Be Light” sort of moment. How long did it take you to nail that sound down?

It was probably one of those things that took fifteen minutes and then I didn’t think much about it. That’s the weird thing about working on games, everything is just stuff that needs to get done. It’s only when the game is released that it becomes this monolithic thing, where it feels like it couldn’t have been any other way. But that same chord comes in in a few other places, so it became kind of a motif.

Can you give an example of how your procedural music works in Spelunky 2?

For the most part, it’s not really looking at what you’re doing in the game, it’s just generating music for you. It plays a chunk of music that could last five, ten or fifteen seconds, then at the end of that riff it segways to a different riff, and it can branch off. So it goes from part A to part B or C at random. From those it could go to a different set of third riffs. What you end up with is like a web of parts that connect in different ways.

It’s an incredibly complex process, compositionally, to make music that works like this. What’s different about it from how most other games do dynamic music is it doesn’t crossfade. The typical way of doing things is, you drop down underwater and the music crossfades into a marimba arrangement. In Spelunky 2, it always transitions from one riff to another riff at fixed points. So it doesn’t work for instant feedback.

I noticed, playing last night, that the pause screen adds a kind of dampening filter that changes the whole sound of the songs.

Yeah, the backgrounds blur out a little bit, so I felt like it made sense for the world to sound a little blurry. That’s the kind of stuff I obsess over: Using my tools to create immersion. When you enter a shop and hear shop music, I had them add a little subtle camera zoom. It compounds with the fact that the music changes, so now you feel like you’re in a space. It made that effect so much better. That’s the kind of stuff that really gets me going.

How much of your musical approach was about not tiring out players, and how much was aesthetic?

It’s both, but mostly it’s an aesthetic choice. I don’t think I’d do this for just any game. It felt like it would mirror the way the levels were put together. It took me a while to know for sure if it was working: I wrote some music with some variations, and it still felt linear. But once I had seven or eight parts slotted together, I noticed my head gave up on trying to keep track of it all, and that was a little victory for me.

Something really interesting to me is that I haven’t seen [musical implementation] mentioned in any reviews or anything. I actually think that’s really good. It means I managed to sneak this wildly complex thing right under people’s noses.

I ask everyone in the column the same final question: If you could soundtrack any video game in history, what would you choose and why?

I think the honest answer is that I wouldn’t want to touch anything. But there are series that I would have loved to work on: an Animal Crossing game, an Ape Escape game, a Goemon game. But I thought about it a bit, and the one I would like to do with different music is Doom (2016). I do want to say that the existing music is incredibly well put together and it fits the game really well. But I played Doom and Doom 2, especially, growing up. I loved exploring those worlds. The original Doom games, there’s something really punk about them. They’re ugly and garish in an appealing way. And the new Doom is squeaky clean in a way. So I would ditch the industrial electronic aspects of it, and I would love to have some really raw thrash metal or even early black metal / death metal stuff. Something very lo-fi and ugly. It’s not a good idea, business-wise, but for me as a really niche player, I want something really rough playing while I’m killing demons.