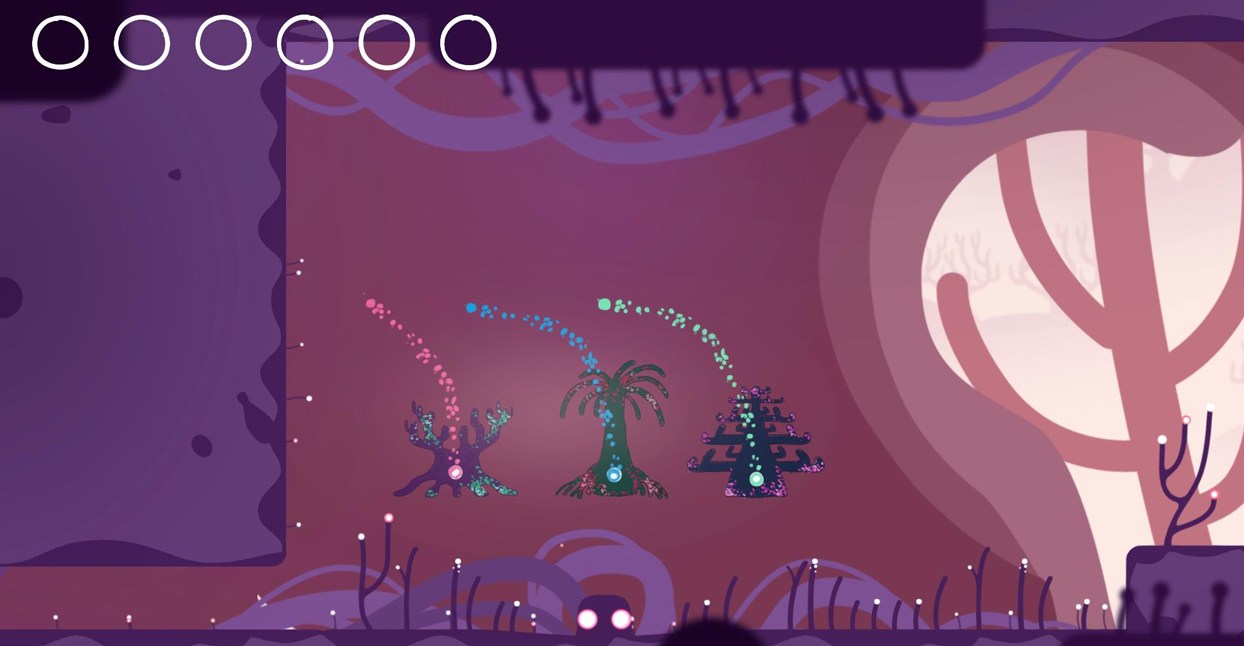 Semblance, the puzzle-platforming game, is all about feel: gelatinous physics mechanics, slowly-shifting color schemes, and beneath it all, interwoven threads of pastoral symbolism and sci-fi weirdness. Its unstated premise is abstract but familiar-feeling; a small-but-resourceful purple blob (that’s you!) must rid a space-forest of various neon-tinted invasive species. Being a good steward of cosmic nature proves a profoundly satisfying process. That’s due in no small part to the score, composed by 36-year-old Daniel Caleb Matthee (professionally known as Daniel Caleb), which plays an indispensable role in crafting these lasting impressions.

From the swells of tribal-sounding percussion on “Far From Home” to the bleak and culty rave-synths of “Ancient Heights,” the compositions play with ancient and futuristic sounds in a manner that might sound hokey on paper—but actually comes out sounding exactly the opposite. That may be a credit to the South African musician’s sprawling resume; he has played tenor sax in a swing band, produced award-winning South African electronic albums, and scores around four films (and dozens of TV and commercial projects) per year with his music production company, Pressure Cooker—and did we mention he holds degrees in history and psychology?

Semblance is Caleb’s first foray into game music, but he credits the music’s success to an old lesson he learned composing from films. “You have to say, ‘Let’s forget everything we learned at school and play these things in a way that would horrify our music teachers,’” he says. “That has led to some of our best work.” We caught up with Caleb via email from his home in Cape Town, South Africa, where he lives with his wife and daughter.

You’re a longtime gamer. What were some of the games you grew up with and loved, and what do you find yourself playing these days?

I became a gamer when my parents bought the family our first PC in 1991. It really blew my mind as a kid. Games from this era that I spent my life playing were Dune 2000, Rebel Assault, Mortal Kombat, Doom, and the like. I was particularly amazed and horrified by the atmosphere of Doom.

Games I’ve recently enjoyed are The Witcher: Wild Hunt, Doom (2016), and Grand Theft Auto V. And I’m always casually playing games like Rocket League and Left for Dead with friends scattered around the globe. I’m also a huge VR enthusiast. At night I often wake my family up knocking things over in my small man-cave, playing games like Lone Echo, Skyrim VR, Alien Isolation, and Subnautica.

Can you recall the first game (or games) where the music really grabbed you? What did you like about them?

I remember my friend playing me an Ace of Base song through his internal PC speaker. I have no idea how he did it, but we thought it was badass. For the first part of my youth, that was how I experienced any sound: through a PC speaker. Then the Soundblaster [sound chip] arrived. Star Wars: Rebel Assault was packaged with our family computer, and everything changed for me with the introduction of an actual sound card and speakers. I could hear the orchestra, the voices, the lazers. I was experiencing a game on a whole new level. My favorite music experience in a game, though, was hearing the Elder Scrolls III: Morrowind theme for the first time. I just sat there thinking, “This is possibly the greatest theme ever created.”

How did you break into film scoring?

The first film I did was seriously low budget. It was basically four dudes in one room wearing leotards. They had to constantly swap out characters and do scene transitions with cardboard boxes. None of us knew what we were doing, and it took us around two years. After that first film I met my business partner, James [Matthes]. We had a shared passion for music, and we started a music production company out of two small studios in his basement. It’s now 10 years later, and we’re fortunate enough to have two more musicians and three sound engineers working with us at Pressure Cooker. So I’ve been able to take a step back from film a bit to follow my dream of getting into audio and music for game development.

Semblance is your first game project. How did it come about?

I’ve wanted to get into game development since my childhood—but how can you get into game music if you’ve never done a game? I spent weeks lurking in game development forums. I would try find out which developer was doing what, and look at examples they were posting for feedback from other devs. There was one dev who posted a GIF that drew my attention: It was a little purple blob he had just designed a “dash” effect for. I really liked the animation, and decided to drop him a message. That’s how I met Ben [Myres], and later Cukia [Kimani] from Nyamakop, the studio behind Semblance. It was their first game, and I could see they had some seriously cool ideas. The game was early in development, which was perfect for me. There was a long road ahead—similar to my first film—and I was going to learn a hell of a lot working alongside these two super-talented developers.

Semblance’s art direction is so singular and strange that different music could very well have altered the experience greatly. How did you settle upon the the earthy, ambient feel of the material?

It could have gone in so many directions. I had a discussion with the devs before we started the process. They knew they wanted it to be ambient, with hints of Africa. That’s pretty much what I remember the root of the direction being. The rest was up to experimentation, and I was fortunate enough to have their backing throughout. Sometimes I would pick up tempo too much, and their feedback would be, “Hey, we’re not about to fight a boss here.” I learned my lesson, and had to experiment with how to keep things interesting without ever really rocking out. This is when I started to push it in a more otherworldly direction—using synths to keep things interesting for me.

Your percussion choices, in particular, are often very organic, layered and polyrhythmic.

The percussion took a lot of work. I must have gone through over a hundred little shakers to find a few that fit what I was going for. I would ask my brother to play a build of the game, and I’d sit in the background doing something else. It quickly became apparent that repetitive percussion with the wrong samples can become annoying real fast. This is when I switched to using a lot of synths for percussive beds. So it’s both a mix of samples and synths for percussion.

How much of the music was created digitally with samples, as opposed to live instruments?

The live instruments I recorded were violin and cello. I find that samples have come a long way in terms of conveying emotion, but having at least one live instrument always elevates the production in all aspects. I work the same way we work in film in this regard. When we record the session musician, we get all the pre-written parts down first. Then for the final few hours we just go crazy and experiment. Often this is where the magic appears. A lot of the weird cries and guttural otherworldly noises are from the violin or cello messing around with playing their instruments in non-traditional ways.

When you were first scoring this game, did you know it’d eventually be released as a  standalone soundtrack?

At first it didn’t cross my mind, I just put my head down in the excitement of my first game soundtrack. It wasn’t until about half way, when Cukia started dropping hints of a soundtrack, that I had a mild anxiety attack. I suddenly thought, “Oh hell, there has to be some sort of listening order to all of this?” To be honest I’m still anxious about the order of the tracks. Is it ever right?

If you could choose any existing video game to rescore—not because the existing music is bad, but because it excites you—what would you choose?

Oh wow, what a question…I’d like to rescore Skyrim with a Gregorian a capella group, who sing songs directly relating to each quest you’re on. And, I want to play it in VR.