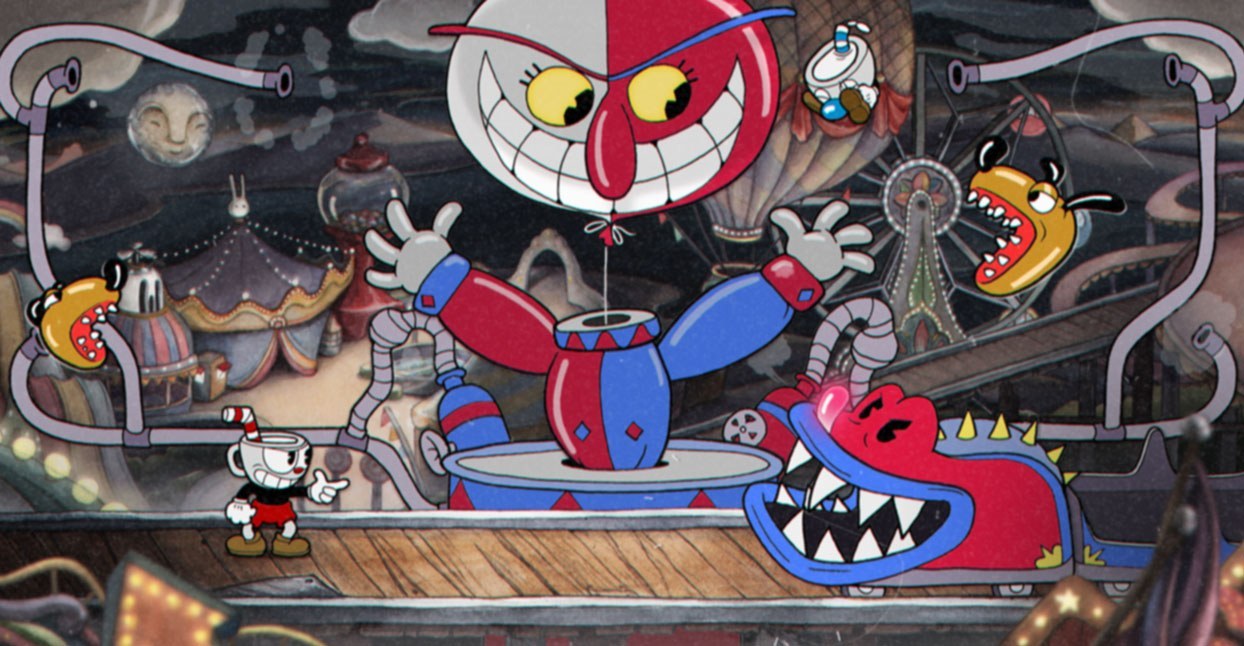 Cuphead, the video game, is a momentous achievement. Its creators hand-drew over 120,000 frames of animation the old-fashioned way—pencil drawings inked on a light board—before transferring them to digital form. The result is a stunning combination of two golden ages: fluid and beautiful early animation, and innovative but brutal home console gaming. But the visuals and gameplay weren’t the only massive undertakings required to create Cuphead. The game’s pitch-perfect soundtrack—which features everything from tender piano ballads to barbershop quartet tunes—is an accomplishment itself.

The backbone of Cuphead’s musical accompaniment comes from woozy big band numbers ripe with clattering percussion and appropriately cartoonish energy: some tunes bear the influence of Latin music (“Floral Fury”), others are inspired by early silent film (“Forest Follies”). All of them sound like products of the early part of the last century. The soundtrack, made with the help of over 40 musicians and running nearly three hours, is not only essential to Cuphead’s singular gameplay experience—it stands up well on its own. Toronto musician Kristofer Maddigan, a seasoned classical and jazz performer and composer, is the force behind the project. As he notes, it was originally pitched to him as a relatively modest undertaking.

This is, I take it, the first game you’ve ever made music for? Can you tell me a little about what stage the game was at when you first came on board, and how you got involved?

Yeah, this is the first game I’ve written music for. I was brought on board fairly early on, around late summer 2013. I’ve been friends with Chad and Jared Moldenhauer [the brains behind StudioMDHR] since around grade five. They came to me and said, ‘Hey, we’re making this very small game, eight to 10 bosses, max—do you want to write music?’ I promptly and eagerly said no thanks, that it was very outside of my realm of experience. But they persisted, and eventually I ended up writing a few midi mockups. Things snowballed from there.

Was composing for games something you’d seen in your future, or someting you actively pursued?

Not really. I’ve wanted to write for a long time, but I’m not someone who can just sit down and create—I really need specific projects to work on. I never envisioned myself writing early big band tunes, but it’s been as good an outlet as any to get the ball rolling. I feel much more prepared now to tackle any other projects that come up, similar or not.

You credit artists from Jelly Roll Morton to Wagner in explaining Cuphead‘s musical influences. What kind of research did you find yourself doing in putting this game together?

Were all of your influences from the world of music and vintage cartoons, or was it instructive at all to play other games and see how their soundtracks operated?

I watched very few vintage cartoons along the way, since Chad and Jared knew early on that they wanted a big band soundtrack, which is something that was not often used in old cartoons. Typically, the music had more of a ‘cartoony,’ orchestra kind of sound. All I really looked for in those old cartoons was how they approached the intro and title card sequences. I also actively avoided playing any games to see how their music functioned. We really approached things with more of a ‘let’s create a great overall vibe’ philosophy, as opposed to the more common approach of building layers that mirror fight progressions. I did find myself reading some books related to game soundtrack composing—for example, A Composer’s Guide to Game Music by Winifred Phillips, and the Koji Kondo 33 1/3 book—but we really wanted to approach this from a very different angle than typical game music composition.

You mention in the soundtrack credits that you had to learn to write and orchestrate ‘from scratch.’ Was that a recent development?

I literally had no idea what I was doing when I started, which ultimately, I think, is a good thing. I was flexible, and not bound to any ‘rules’ that they teach in school. It was literally just sitting down and taking one step at a time. Find an influence. Then ask, what style is the tune going to be? What are the chords? The structure? As I got better, I was able to rely more and more on my own creative instincts and confidence. My favorite tune, ‘Pyramid Peril,’ is like that. It’s one of the tunes that has a lot of ‘me’ in it, and less other composers—although it’s still heavily influenced by Duke Ellington in spots.

Finding a great teacher helped. I was very fortunate to connect with John Herberman who, aside from contracting the sessions, doing the conducting, and dealing with the business side of things, was a great mentor for me. I recommend to anyone getting started to try to find the best guidance you can.

Was there any cognitive dissonance when you thought about building a cutting-edge video game with musical influences that stretch so far back into the last century?

Not really, no. From a very early on I had a pretty clear idea in my mind that I didn’t want this to be a 21st-century composer writing 1930s-era music for a 1980s/’90s-style video game. I really wanted to approach this like I was a composer from some other parallel universe, where the jazz age was happening simultaneously with the golden age of video games. Kind of like, ‘What would video game music sound like if Duke Ellington or Benny Goodman were writing for that medium and not for the concert stage?’ I think one of the reasons people have reacted so positively to Cuphead is because there is this nostalgia for classic animation and early jazz, even if some folks haven’t been exposed to much of it in their lives. As time goes on, there are fewer artforms that have a really ‘analog’ kind of vibe about them, and I think when people experience that—even if they can’t put their finger on it—there’s something familiar and comforting about it, and it is very easy to appreciate the craftsmanship involved.

Where did you find the Barbershop Quartet? Can you talk a little about that experience?

I believe that Chad found the quartet, Shoptimus Prime. If you watch some of the early gameplay footage from some of the first playable demos, you can hear them singing during the title screen. Since they were already involved, it made sense to reach out to them to be involved in the final game. I had already written new title screen music, but it wasn’t particularly ‘barbershop-y,’ so I had to reverse-engineer it to make more stylistically accurate. They helped me locate a copy of the official Barbershop Arranging Manual printed by S.P.E.B.S.Q.S.A. (Society for the Preservation and Encouragement of Barbershop Quartet Singing in America, Inc.), which I believe is basically the bible of barbershop writing. It’s literally almost two inches thick! Barbershop actually seems like some sort of secret society—there’s very little information available online about composing for it! After writing and fixing up the title screen music, I thought it didn’t make sense to bring Shoptimus into the studio to record just one song—as well as some of the announcer lines. I really wanted to stretch myself and write something in a much more authentic barbershop vein.

There’s a song called ‘A Quick Break,’ and it’s incredibly charming, because it breaks down the fourth wall to address the player. Games never tell you to take a break from playing them, so it was kind of shocking to hear. Was it your idea to encourage players to take a breather? Or did it come from your own mental state, in the midst of composing dozens of songs?

The idea for ‘A Quick Break’ was actually suggested by Chad. The tune was always meant to be a little tongue-in-cheek, and I originally thought that it would be funny to have it as a bonus track after the end credits. My first few ideas—one saying ‘Sorry the game took so long and was delayed,’ the other suggesting that now you’re done you should try ‘expert’ mode—were rejected by Chad as ‘too meta.’ He’s the one who suggested writing something about taking a break. I don’t think I wrote it subconsciously for myself, although I suppose there could be some sort of deep existential paradox about spending weeks studying barbershop arranging to write a song related to being too overworked to write a nonessential bonus track…

Have you been approached by other game studios since Cuphead‘s release? Is soundtracking games something you’re interested in pursuing in the future?

I’ve had a few offers for other projects, no other game studios yet. To be honest, as a fairly busy freelance musician, I don’t really have enough time to add more composition work to my plate. I can’t really fathom the pace that some composers work under, having to complete a new TV episode every week, or getting the finished cut of a film and being told, ‘You have a month to score this.’ Cuphead took many hours every day for a number of years, but it was also not really a full-time project for me, so any other writing would need to be treated the same way. I would consider certain projects if they sounded very special, and I would absolutely work with MDHR again, since I know that we both work at the same pace: slow and deliberate.

But did you have any idea this project would take off the way it did?

I think by the time the 2015 E3 trailer hit, we knew that we were going to have, at the very least, likely a modest hit on our hands, but none of us expected the critical or commercial reaction that has happened since the game’s release. It’s very gratifying, to say the least.