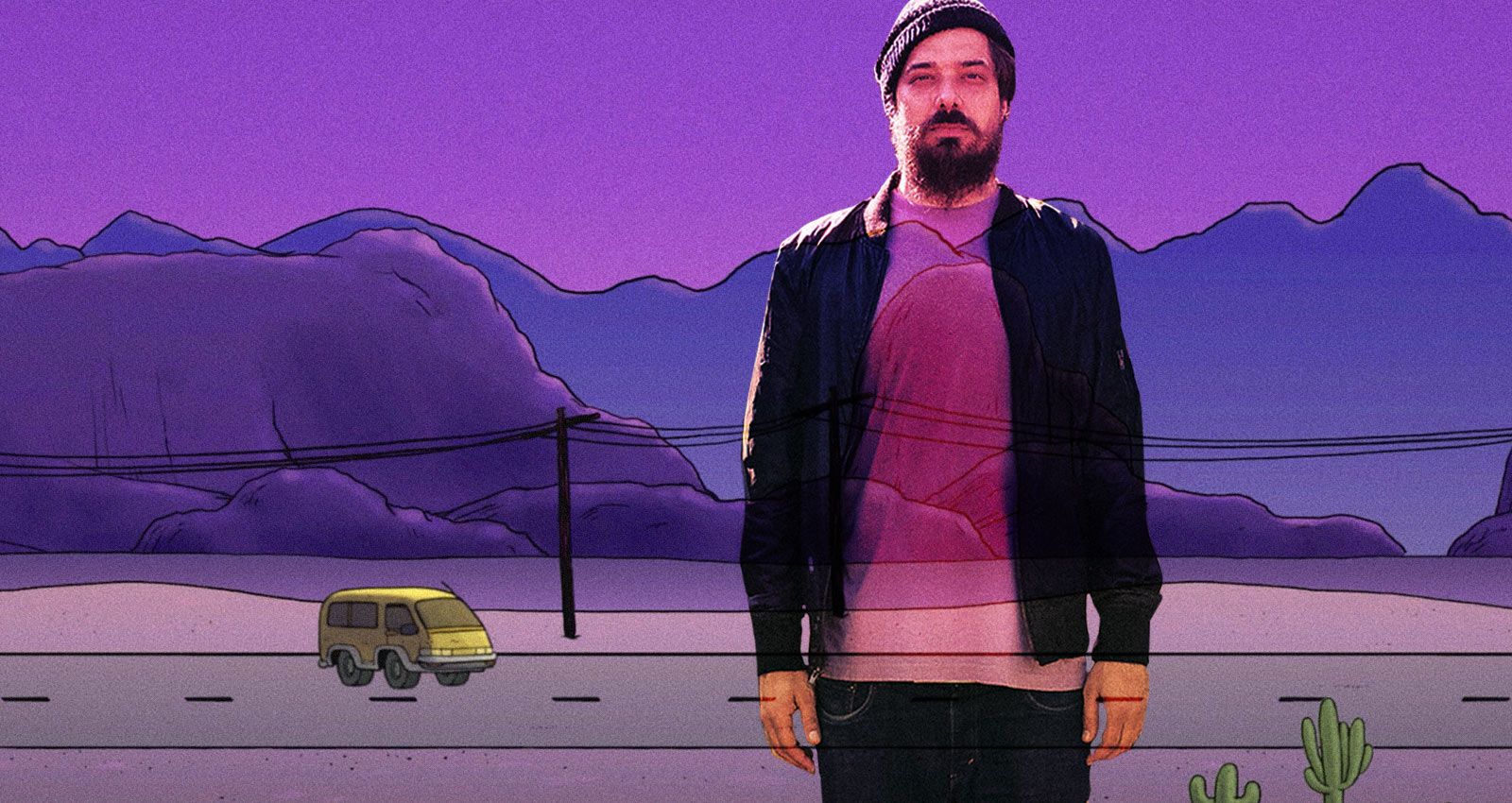 Last year, Bavitz provided original instrumental music for the over-the-top and psychedelic side-scrolling space-shooter, Freedom Finger. Though he didn’t craft the whole soundtrack (Freedom Finger features an impressive collection of previously released songs from acts like Ty Segall, Red Fang, and White Fence), Aesop Rock’s bombastic original beats sets the tone for the outlandish, hand-drawn antics of the game. Last month’s “Rhymesayers Update” brought Aesop out of the menu screens and into three brain-shredding new levels. He added lyrics to two Freedom Finger beats, and provided one new song for the occasion. The new songs provide a pitch-perfect aural accompaniment for the dizzying on-screen action, which includes killer peace signs and one giant murderous military brain (On “Play Dead,” Aesop raps “Warfare/ I don’t war fair/ I like rocket fuel in my morning air/ I like red buttons under iron fists/ And my stunt double’s like ‘I quit’”).

We couldn’t pass up the opportunity to talk to Aesop, via email, about staying productive, playing NBA Jam on tour, and video games that bring the whole family together.

The video for “Shrunk” was shot in Portland’s world-famous Ground Kontrol game bar. Have you spent a lot of time in arcades in your life?

Video games have kinda been around me since I can remember. I spent a lot of time visiting Pennsylvania, where my parents were from, as a kid. My mom’s cousin managed a Top Dog, which was an arcade and burger joint. So I have memories of him handing me a large cup of tokens when I would come in, and it felt like I could just play forever. Birthdays at Chuck E. Cheese were common. We had a Commodore 64 at home, and I remember playing games like Aztec, Archon, B.C.’s Quest for Tires, Karateka, stuff like that. Atari 2600 followed, and that just made it all even easier. I remember my older brother got some super high score on Barnstorming, and he sent a photo of the screen to the company…not sure what happened from there. We didn’t have an arcade in my hometown, but we had Street Fighter at the local pizza joint, Mr. Do at iHop, and you’d find the odd game out in the wild. You could find Centipede or Pole Position pretty easily. Still, home game systems were only getting cooler, and once Nintendo hit, it was a wrap. I do remember an arcade on my college campus, but that was later—like ’94 or ’95. I loved going down there and playing Killer Instinct.

You grew up with two brothers. Were there games you would get in physical fights over growing up?

It didn’t matter what game it was—the fight was always about who “called” first game, etc. I don’t remember fighting much about the actual games, because it was hard to argue points on a screen—just about whose turn it was, bullshit like that. But beyond the fighting, video games were just how we bonded in those days. I know it’s common for parents to frown on the idea of a child spending hours in front of a screen, but those games were what kept us together a lot of times. Especially as we all got older and found different interests—video games were the common ground. On 2600, I remember a lot of Pitfall, Haunted House, Superman, Defender, Missile Command, Zaxxon. Nintendo was Excitebike, all the Mario games, Zelda, Spyhunter, I mean we could do this forever. My brothers and I certainly fought over games, but I genuinely feel they brought a net positive to the household.

Did any specific video game music have an outsized impact on you?

I mean, going back now and listening to some of the music on those early games is nostalgic and fascinating, but at the time I don’t think I was picking it apart in that way. My young mind just wanted the full experience, and a lot of early video game music just blasted you with synth riffs: the only vibe was, “Action, right the fuck now!” It kept things exciting, but it was all just part of the game to me. I think maybe that changed with Nintendo—Zelda and Mario always had music that stuck in your head—every level had a mood change, and the music was a huge part of that. By the time you got to like Zelda on [Nintendo] 64—Ocarina of Time, best game ever—there were these compositions that felt huge and emotional, as well as musical puzzles within the game. Play the flute to open the magic door, etc. I loved that stuff.

Do you play a lot of games when you’re on tour, as well?

I’ve had successes and failures with gaming on tour over the years. Early, we used to pack game systems in our bags to play at hotels, but it always felt like a bit of a hassle. When the PSP came out, Twisted Metal was a great van game. Mr. Lif loved that shit. DS was a lot of Mario Kart. In more recent years, I’d have to say NBA Jam is the perfect game for a tour van. When I’m alone at home I prefer one-player adventure stuff with a campaign, etc. But that stuff does not work in a van. I never play sports games at home, but something like NBA Jam moves quickly, everyone gets a turn—it’s not too serious, everyone’s hooting and hollering, and the games are the perfect length.

Freedom Finger isn’t your first time appearing in a game; you did some voice acting on Rockstar’s The Warriors game, and you have appeared on three Tony Hawk’s Pro Skater games. Skating, games, and hip-hop being kind of a holy trinity for you, I wonder what it was like hearing your music in a game for the first time. Do you think that Tony Hawk series relationship brought a different audience to your music?

I need to mention that I was also a playable character in NBA 2K6 and 2K7, because that still makes me laugh. Having songs in the Tony Hawk games was completely amazing. You gotta understand that I started skating in the ’80s with the Bones Brigade videos, so Tony and that crew have been iconic figures in my life since 1986. Beyond that, those games were so good! At the time, they were so far beyond any other skate video games that had ever come out. We had Skate or Die, 720, California Games, T&C Surf Designs, and all that was cool. But the Tony Hawk games were legit as fuck when they dropped. Real tricks (obviously exaggerated, but based on real tricks, anyway), actual current pros, awesome level design. Seeing that amount of time and effort put into a game about skateboarding was not something I ever thought I’d see. I’m also gonna mention I fucking ruled at those games. Having my music in those games was such a trip. My music and skateboarding lives had never really merged before. I had been off my board for some years by the time the first game with my music came out, but I was just so psyched.

Still to this day, I get people coming up to me that discovered me through those games—which is crazy. The games I grew up on had wacky 8-bit synthesizer music, so having some kid learn about what I do through a video game about skateboarding is the best. Those guys at Neversoft also treated me super well, and I got to go to E3 and all that. I’m very grateful.

Travis Millard, one of the people behind Freedom Finger, is an old friend of yours. Can you tell me a little more about that relationship?

One day Travis and I were texting, and he told me this game he’d been working on was really close to being done. Travis drew the whole thing—sick. Furthermore, they’d licensed music from something like 40 bands—wow. So he basically said they were in need of some original beats, and asked if I’d like to help out—of course. Honestly, by the time I got on board, all of the hard work had been done. They just needed some music to flesh out some sections, and I was super flattered that he asked. Not only did the game look fantastic, but I got to be the only musician providing original pieces specifically meant for the game.

There aren’t a ton of games with convincingly hand-drawn graphics and a lot of personality, like this one. Sometimes I think too much style freaks gamers out! As an illustrator yourself, is that part of what drew you to the project?

It’s very generous of you to call me an illustrator! I like drawing, but I have a hard time identifying as a visual artist, because my music sort of picked up right after I graduated from school, and my path changed pretty rapidly in those years. I spent a lot of years not drawing at all, or just doodling here and there. But to be honest, I would do anything Travis asked me to do. The fact that it ended up being this insane game that he had poured years worth of work into was really just me lucking out.

But I do agree with what you’re saying—sometimes people just want what they’re used to regarding game graphics. Uniqueness can work against you. I remember when Ico came out on PS2—I was like uh… why isn’t this universally recognized as the best shit ever? Why doesn’t this happen more? It got some props, but I think it was just too different, graphically, for people to give it the recognition it really deserved. Freedom Finger looks fucking awesome. It’s weird, it plays incredibly well, and it’s got Travis’s unique hand all over it. It’s so good to see this kinda stuff out there. It’s not “video game art,” it’s a video game made by an artist.

You initially contributed a few instrumental tracks. I know you’ve done plenty of instrumental and production work before, but I wonder: When you make a beat you’re really happy with and you’re listening back to it, is it even possible to not start playing with rhymes and cadences? Is that something you can really turn off?

Well, when I’m in a phase where I’m really cranking on beats, at the end of the day there’s always stuff that just doesn’t get used. It’s not always because I don’t like it, or wouldn’t want to rap on it. Sometimes it just doesn’t happen. Maybe it sits around for too long and I lose the spark to write to it, or I just don’t have a place for it on the specific project I’m working on at the time, or it’s just unfinished and I’m in a different mood the next day. What Freedom Finger originally needed from me were beats that were only eight bars long—stuff they could loop on their end and make last as long as they want. That’s the perfect opportunity to go through my stuff and find some things I liked a lot, but never fleshed out; or dabble with some new ideas that I knew I wouldn’t have to build into a full song.

I ask this in every column: If you could recreate the soundtrack/score to any game in history—not because the current music is bad, but because you think you might have a new approach—what game would you choose, and what would you do with it?

Damn. My fave games already have perfect music—so to be clear, I’d probably be ruining it. Ocarina of Time, as mentioned, is probably my favorite game ever. I truly don’t have the skill or audacity for an undertaking like that. But for the sake of giving an answer, I would maybe go for the lo-fi version of that, and just drown out my lack of orchestral aptitude with a bunch of delay pedals and shit.