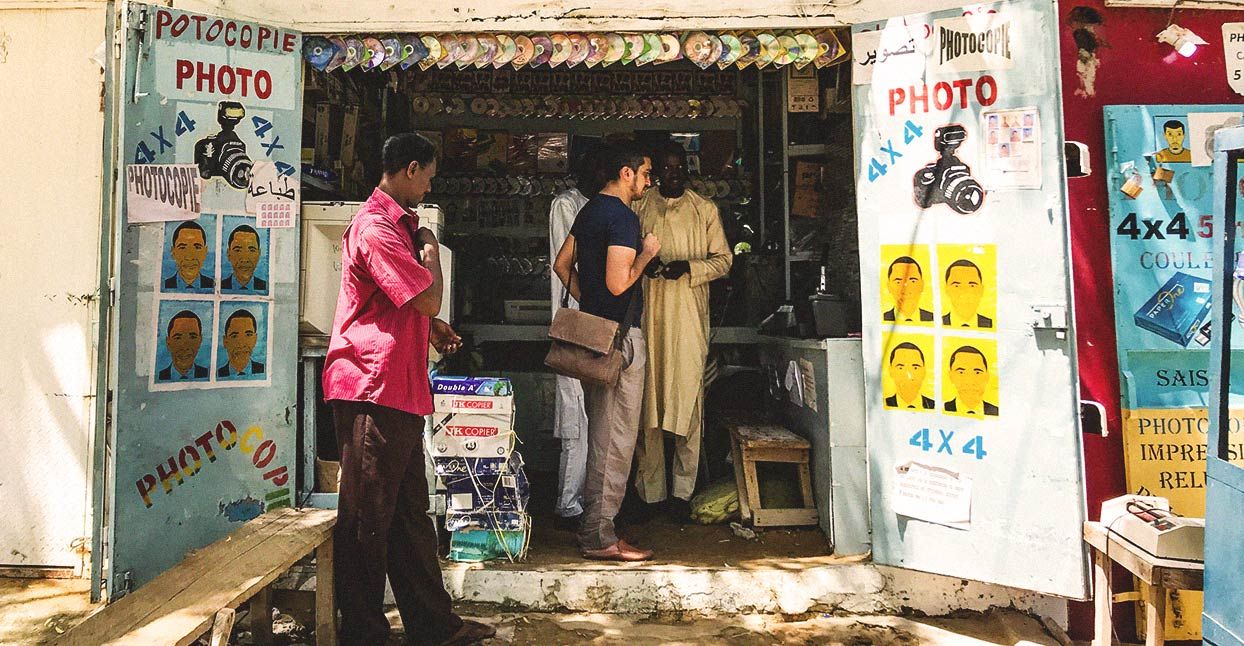 For the last three years, Ostinato Records has been reissuing lost classics of African music. Their journeys take them across the continent, tracking down the original artists via a network of tips and personal connections. Here, label founder Vik Sohonie brings us along for the journey, traveling to cassette shops and recording studios in search of rare gems.

Djibouti’s markets are absolute treasure troves of original cassettes from across the region—especially Somali cassettes, as almost half of Djibouti’s people are Somali. The majority of the Two Niles compilation used master sources we found in the market pictured here. The guy who owned this shop told me, “You’re taking away all our culture to somewhere else,” which really pushed us to start putting together all the recordings we’ve gathered for various projects and sending them back to the country of origin, to any archive that will take them.

Here I am organizing the thousands of cassettes in the Red Sea Archive at the Hargeisa Cultural Center in Hargeisa, Somaliland. These are the tapes we used to compile Sweet As Broken Dates. Not all of the cassettes had been organized or cataloged or identified by artist or style, so we did our best to arrange them in a way to find exactly what we were looking for.

An elderly guy who worked at the National Radio in Hargeisa heard about what we were doing and told us he had a collection of cassettes he kept in old boxes at his house. He had us over and allowed us to go through them. We didn’t have any audio equipment with us, so we just picked up a few tapes from artist names we recognized, a couple which will feature on future Somali projects.

That’s me, Ahmed Asyouti (our main man in Khartoum), and Abu Obaida Hassan, the famed (but thought dead) tambour player from the north of Sudan. We’re at his home on the rural outskirts of Khartoum, where he lives in very humble conditions, as the money he made during his heyday didn’t stay with him. The photo in the top right of this photo is the one we used as the cover of the album.

The photo at the bottom right was taken at the home of the son of Khojali Osman, whose song “Malo Law Safeetna Inta” is the fifth track on Two Niles. We’re explaining to him the licensing contract for his father’s song. This was a more sensitive meeting than most, given that his father was one of the singers killed in what is widely considered a political killing during the height of anti-music sentiment in 1990s Sudan.

This is a good example of Sudanese hospitality. We met almost all the artists at their homes and that involved a full spread of food, juice, and tea before we could get to business. Here, Samira Dunia, whose song “Galbi La Tahwa Tani” is Track 11 on Two Niles, prepares us some delicious coffee perfumed with oud after cooking us an Ethiopian meal.

Not too long ago, N’Djamena was filled with “studios” or music shops like this one. Chad never had a professional music industry. Chadian artists recorded everything live DIY, or in makeshift recording studios. They’d take the master tape to one of the bigger studios where they’d digitize it and sell it as MP3s. This kind of studio culture is common across African countries that never had any vinyl recordings. Studio Al Noujoum is one of the last studios with original cassettes and some masters.

This is the shop owner’s son. He knew his music and his artists. He helped us pick out what we were looking for and to identify songs.