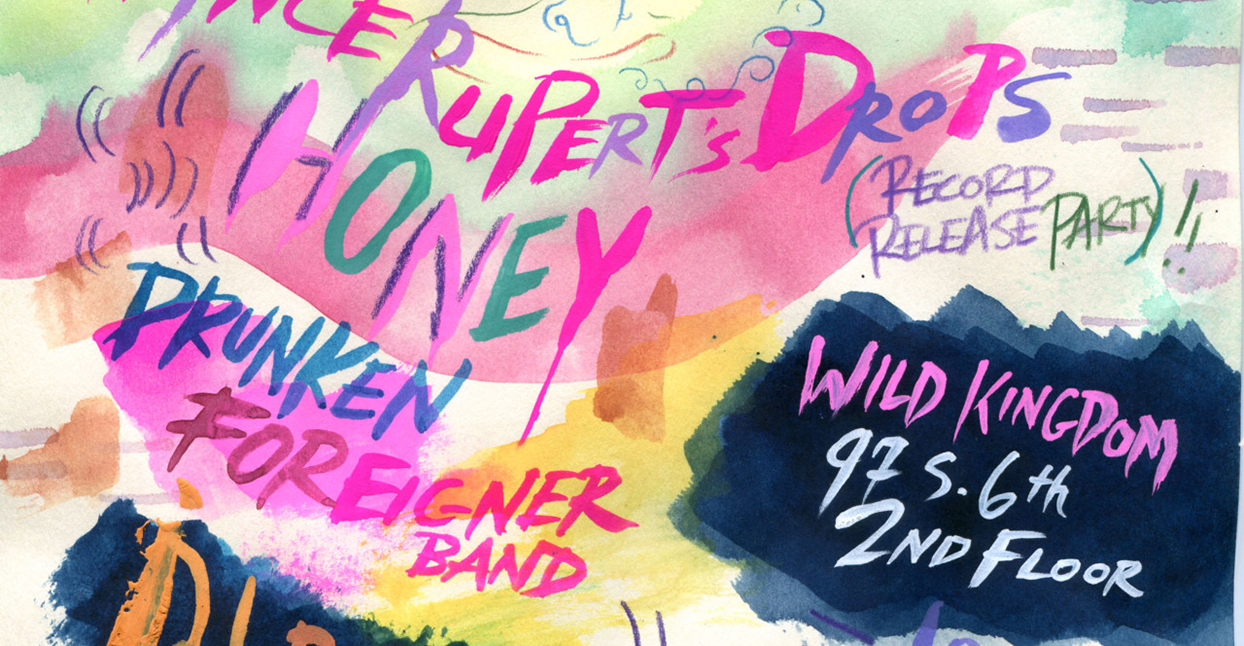 The joys, tedium, and indignities of being a working musician are well known to cartoonist Leslie Stein, accomplished guitarist and vocalist for Brooklyn-based psychedelic rock band Prince Rupert’s Drops. Though her comics are usually based on her own life, and are infused with her love of music (referencing Alex Chilton, LCD Soundsystem, Ringo Starr, The Band, Neil Young, Michael Hurley, and even the Osmonds), they rarely focus on her experiences as a musician. “I think art has always taken precedence over everything in my life,” Stein says. “I read about Hendrix falling asleep with his guitar in his bed; I fall asleep on the floor next to my drawing table sometimes. Not that I am comparing myself artistically to Hendrix, of course.”

In her long-running comic book series Eye of the Majestic Creature, Stein makes witty, moving observations about flaky friends, awkward family moments, absurd jobs, hangovers, and loneliness, with a unique voice and visual style. Stein describes the latest EOTMC collection, Time Clock, as, “the saddest in terms of content, but also the funniest. I always try to balance those two.” The EOTMC stories, drawn from her experiences growing up with a single mom in Evanston, Illinois and then moving to the city (San Francisco briefly, then New York), are somewhat fictionalized, starring an alter-ego named Larrybear, and dosed with magical realism: Larry’s best friend, Marshmallow, is an anthropomorphic acoustic guitar, and characters appear with animal heads and flower faces. Larry practices an invented art form called “sand counting,” which serves as a stand-in for drawing comics—or for any solitary, obsessive artistic pursuit. Stein’s exquisitely crafted art makes the parallel evident. “I like to get really into the detailed work and stippling—I actually find it relaxing. But I think some of the panels were getting a bit too dense.”

Stein discovered a much simpler illustration style a few years ago, when she spontaneously began drawing impressionistic, colorful memoir strips. This work continues to appear frequently on her Tumblr and weekly on Vice, and were collected by Fantagraphics in the 2015 hardcover Bright-Eyed at Midnight. “I think with the diary comics I figured out a way to convey more with less, and that’ll have an effect on EOTMC in the future. Halfway through Time Clock, I get rid of the detail completely and just use black and white.”

Creative stagnation is anathema to Stein. “In both art and music, I’m excited by the same things: the initial idea, and then building something with it. If a song or comic is done, it’s time to move on.” Lately, her musical interests have moved toward “more expressive experimental music and jazz. I find it more exciting than watching a band cover their own recordings. Also, I love painting this type of music and letting the way the instruments blend together and then pop out affect my heart and body and hands.”

Stein has also been soliciting suggestions on Facebook for abstract paintings, and songs to interpret. “It’s such a fun exercise for me, and seems to make other people happy too. And at the same time, I’m learning about different music and communicating with people about something we love. I think I am also trying to have fun, and obviously my work is incredibly emotional, so those blend the joy and the pain.” For Stein, her work, whether abstract or narrative, is increasingly about emotional connection: “I’ve gotten some mail from strangers that thank me for sharing [my experiences], and then they share with me. A couple have made me cry. So lately, more than ever, there’s also been a desire to help people by putting out honest and caring work.”

Stein’s latest comics project will be selecting from the short stories running weekly at Vice for a new collection. “I’m trying to creatively piece together those comics and past ones I’ve made for them to make a nice collection, where the different stories feel connected,” she says. “I’m approaching it the way I would a song: ‘OK, I have Part A and Part B; what can I do to connect them and enhance them?’ It’s pushing me to further evaluate the meaning and themes that connect these little expressions.”