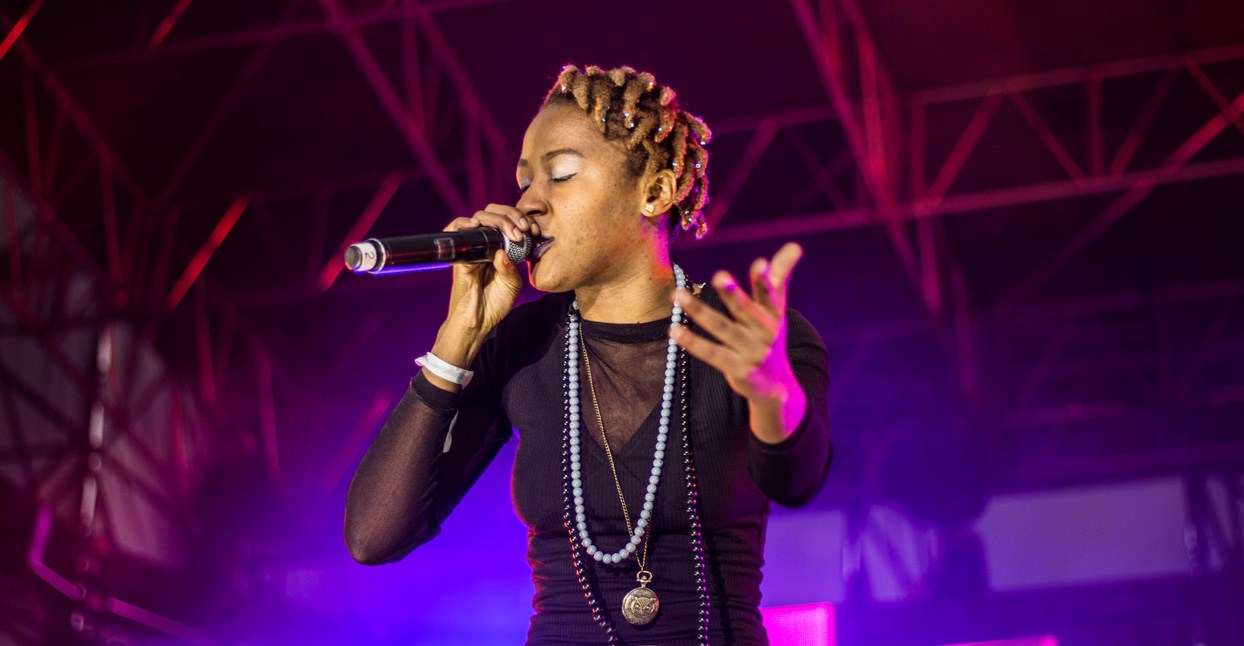 South African rapper Yugen Blakrok was in Berlin, Germany with her producer and DJ, Kanif The JhatMaster, when she got an email from Top Dawg Entertainment asking her to jump on a track. “I didn’t know what it was for, or who would be on it,” she recalled while preparing to record a verse for her upcoming sophomore album. “It was a ‘Hey, we came across your work, it’s good stuff’—you know, that kind of thing.”

Blakrok recorded the verse for TDE, which was included on a song called “Opps” featuring Vince Staples, while she was still on tour. Then, when she got back to South Africa, Blakrok got an email from TDE saying the track would be used on the Black Panther soundtrack. “For me, it was really hard to believe—but also not, because you put your work out there for it to be found,” Blakrok says. “So when it happened, it was mind-blowing that it would lead to that.”

Blakrok’s inclusion on the soundtrack is a game-changing moment for contemporary South African music. Though the rapper has a niche fanbase there, South African hip-hop is still a narrow field, so anyone not on mainstream radio or TV usually has a tough time getting noticed. Despite the recent notoriety, Blakrok isn’t in it for the fame. “I’m not an advertising promotional machine,” she says. “I’m an independent artist, pushing a certain lifestyle that may not be conducive to what is being pushed on TV. We’ve submitted tracks and videos to South African stations and international ones, and got a solid no. ‘No, this is not what we are looking for, for our channel.’ Not based on quality, it just doesn’t fit with what they’re trying to push at the moment.”

In South Africa, almost every mainstream rapper has an endorsement deal with an alcohol brand. In turn, the music tends to promote materialism and hedonistic behavior. Blakrok hopes to shift the conversation. “Not to say my music’s not for getting down or for having a good time—it is,” she says. “Mine is just saying there’s more than one way to have a good time, more than one way to turn up. There are many people who are in tune with this kind of vibration, and they want to see it in mainstream media. What are the forces that are stopping it? It’s not that we are all one-dimensional. So it gives you a lot to think about.”

Blakrok’s debut album—2013’s Return of the Astro-Goth—is the antithesis of mainstream rap in South Africa. Her lyrics are packed with similes and metaphors that reference astronomy, astrology, and ancient knowledge. “It’s a connect-the-dots kind of game with me,” she says. “I love puzzles, I love putting things together. I enjoy the research part of my job. I’m a curious person.  I think that will translate in everything that I do—even the style of writing. Even the movies and books I love. There’s something for you to figure out as the listener, clues to a story that you already know, you’re just being urged to remember it; fill in the blanks for yourself.”

This subversive approach to rapping finds a fitting canvas in the beats over which Blakrok rhymes. Kanif’s compositions are greatly inspired by 1990s boom-bap, yet he builds upon the foundation by wrapping foggy basslines and warped synths around dusty, lo-fi drums. “I’m into sounds,” Kanif says of his beats. “I love recording sounds, and putting them into the music. And I like manipulating sound. I will make a breakbeat, and put it in the cupboard, and cover it in a pillow, mic it up, and record that back into the computer, tweak that and just see what happens. Air affects music. That’s why the most beautiful instruments are acoustic—between you and that instrument there’s air. So whenever it’s just digital, and there’s cables, it’s in the machine, it’s singularity, and it doesn’t work.”

Kanif and Blakrok may be one of the most potent rapper-producer duos in South African hip-hop, and based on Kanif’s recollection, the collaboration seemed destined. “I met her and our energies gelled,” Kanif says. “Then she came through, she played me a track, and I could feel the hip-hop aura. But then I went to a live show, and her voice filled that whole room. Something magical just happened. It happens with only a few MCs.” Blakrok recalls being nervous when she first recorded with Kanif, for whom she’s always had plenty of respect. He helped the rapper improve her improve her technical skills. “He taught me breath control,” Blakrok says. “It took us about a year to vibe lyrically and beat-wise.”

In the mid-2000s, during what might be South African hip-hop’s golden age, Blakrok moved to Johannesburg from her hometown of Grahamstown in the Eastern Cape province, where she started out as a rapper. While still in the Eastern Cape, she used to host a hip-hop session (consisting of open mics and performances) and made an appearance on the Hiphocalypse mixtape in 2004 that reached other corners of the country through Hype—Africa’s biggest hip-hop print magazine, which was like a bible for hip-hop heads at the time. “Then, cats like Ootz Tha Afronaut, Dplanet, and Nyambz did remixes of the tracks,” she says. “So from there, I slowly moved to Joburg, and met some cats who had moved here, too.”

Yet despite the success she’s achieved doing things her way, being a woman who raps still presents a certain challenge. “There’s a lot of meeting with people wanting to manage me—like, ‘Dude, you have a great voice, but why don’t you try be more sexy?’” Blakrok says. “This is coming from women as well in the industry. We can talk about women in hip-hop, we can talk about how we are treated in society—hip-hop is gonna be a reflection of that either way, it’s just showing us everyday things.” Nonetheless, her talent and drive persists; Blakrok’s music has traveled beyond the country and the continent.

Blakrok’s new album will be released in 2018. “I’m hoping mid-year,” she says. “It’s bound to be really phat. We will be traveling to Europe, and hopefully the States.” She’s going into her album with great momentum: her verse on “Opps” was considered a show-stealer by the likes of Billboard and Rolling Stone. After the appearance, a number of artists reached out to Blakrok to collaborate, which is a welcomed challenge, but the new media attention has been tough to navigate. “I’ve never had a problem with being an unknown artist,” she says. “I was focused on being an artist and I will continue to do that and not get caught up in being a socialite.”

As she prepares to hit the booth and record those verses for the new album, Blakrok takes another moment to reflect upon her journey. “Things are finally happening,” she says, “all the stuff that we’ve always wanted.”