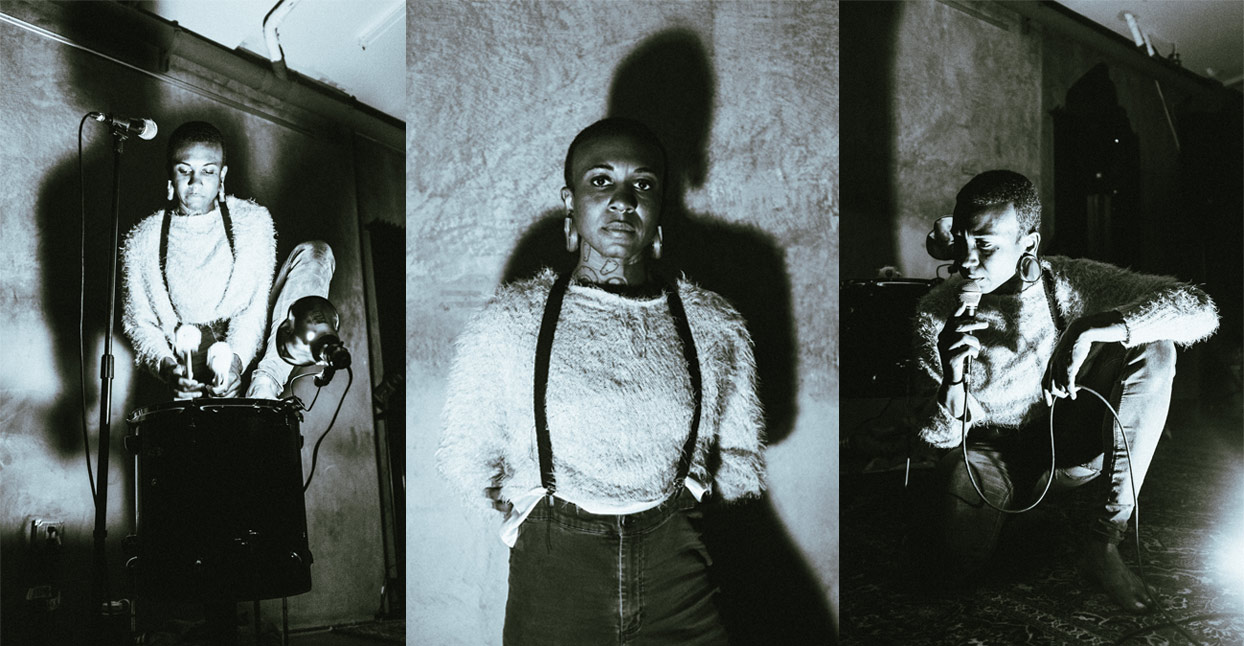 Wizard Apprentice, aka Tieraney Carter, is a structural minimalist, but a micro-genre maximalist. From the witchy, organ-drenched dirges on 2013’s Rash of Feathers, to the wiry bedroom electro-pop of her 2015 album Keep It In, Keep It Out, her stylistic reach is wide. And despite both subtle and monumental stylistic changes along the way, her music has maintained consistent thematic elements—specifically, transforming trauma into dust, and imagining a world where personal turmoil is parted to make room for real joy.

On her latest EP Dig A Pit, which has an epic feel despite its brief length, Carter stitches emotional lyrics over a framework of sparse drones. Recent efforts, like “I Am Invisible,” have employed pop harmonies and other elements of traditional songwriting; on Dig A Pit, Carter is comfortably unsettled, moving from wistful vocals on songs like “Betrayal Internalized” to a low, sludgy bellow on “Exorcism,” laying her slowed and distorted vocals over a creeping, lo-fi trap beat. “I attribute [the sonic differences] to the intuitive process of making music,” Carter says. “I don’t know anything about music theory, so the sound is impacted by how I feel, what instruments I’m using. There’s a sparseness. When I was writing, I had a two-week residency to create songs, animations, scripts—that all affected the process.”

Her earlier albums were composed during snatches of time between shifts at work, or while she was on the bus, or walking to the store. Dig A Pit, which was created following the end of an emotionally abusive relationship, required more intense and prolonged focus. On the title track, she sings, “Be dead to me,” a direct reflection of her coping methods. “There is no contact [with the abusive person], encouraging complete disengagement,” she explains. “There’s no checking their social media, wondering if they’re getting better. Disconnecting has been an important part of the process to heal.”

That separation, Carter finds, isn’t easy, but her music has helped her move forward. Living in Oakland, Carter is part of a burgeoning experimental scene of queer artists of color, who are engaged in consciously creating empowering spaces for marginalized people to perform. The Universe is Lit and Brown Noise festivals, among others, nurture a community that provides artists like Carter a platform. Still, Carter says, “My experience of abuse happened in social justice spaces. There were no tools for dealing with this, and that created a feeling of disillusionment.”

It’s on the song “Desire to Learn” where this sentiment is most deeply felt. On that track, Carter croons with deceptive delicateness, “I didn’t know they could hate themselves so much / Intellectually I remember the desire to learn, the desire to love / Replaced by venomous vengeance,” over an industrial techno beat accentuated with chromatic, Blade Runner-esque synth stabs. It’s a personal statement that feels universal and political. “I’ve been somebody who says the personal is political,” she says. “But it’s my primary intention to figure out how to represent my personal experience, informed by ethical and political understanding of how emotions are treated in this society.”

Being this intuitive and open hasn’t always been easy for Carter. Wizard Apprentice live shows feature a visual component, where a psychedelic, Max Headroom-like avatar of Carter is projected behind the real version who is standing at the mic, programmed beats piping in through the sound system. ”The avatar character is there to help build rapport with the audience,” she says. “So I focus on singing and emotional responses. Playing live is a whole other space to figure out how to navigate. The recorded work can be perfect, but self-consciously I worry about my show-self not matching my social media avatar.”

Wizard Apprentice’s attempt to broach the duality of the projected self and the actual self creates a bit of a mystical aura, despite the fact that it’s intended to erase the gulf between audience and performer. “The way I’m read as introverted, dark skin, androgynous—in a way where I’m stone-faced—people think I’m bored or intimidating. A lot of my music-making practice comes out of a need to show more vulnerable aspects of myself, to be seen.” On the emotionally immediate, stylistically daring Dig A Pit, Carter asks us to see from multiple perspectives—not just the musician and her avatar, but to turn inward, as she has, as we reflect on and seek healing ourselves.