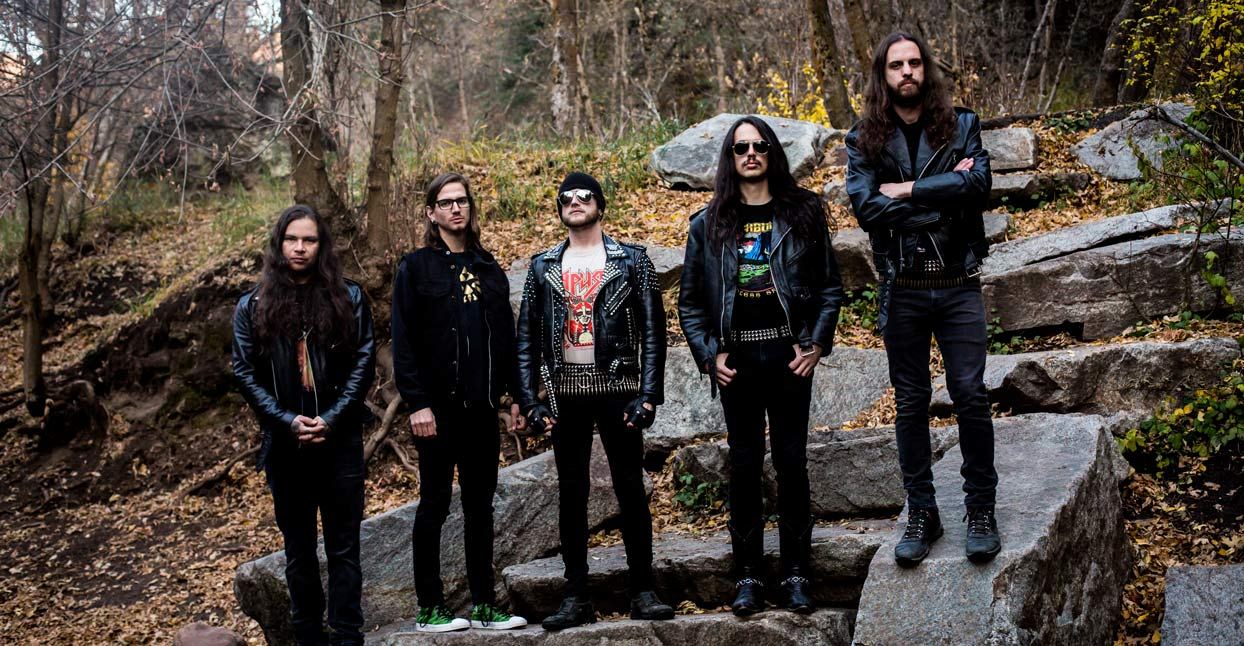 These days, heavy metal comes in all shapes, sizes, and subgenres. As trends have come and gone, as the form has splintered and hybridized—becoming faster, angrier and less comprehensible—the old customs have been kept alive by a cadre of true believers: The classic distorted guitar riff, the soaring melodic vocal, the fantasy-based lyrics, the occasional galloping bass line. Alternately known as traditional heavy metal, epic heavy metal, or even power metal, its origins can be traced back to storied swashbucklers like Rainbow, Iron Maiden, and Dio. Some groups—like famed New York loincloth enthusiasts Manowar—have taken this style to ridiculous and/or awesome new heights by strictly writing songs about swords, battles, and the glory of heavy metal itself. And they are not alone. Since the late 1970s, this concept has fueled a veritable legion of heavy metal warriors from around the globe—bands with names like Thor, Omen, Manilla Road, Grand Magus, and Heavy Load…the list goes on. They are the keepers of the flame, the guardians of the grand tradition.

Enter Visigoth: Five young men from Salt Lake City who are both apt pupils and expert purveyors of the form. The song titles on the band’s second and latest album, Conqueror’s Oath, say it all: “Steel and Silver,” “Warrior Queen,” “Hammerforged,” “Blades In The Night.” Laid thick with medieval bombast, baroque melodies, and singer Jake Rogers’s rich stentorian tenor, Visigoth’s triumphant sound is rooted firmly in the metal of the 1980s, but “retro” is not the preferred nomenclature. Traditional heavy metal, please.

“To me, ‘retro’ is more of a fashion-oriented term, whereas maybe the word ‘traditional’ is a more ethos-driven term,” Rogers observes. “I don’t think ‘retro’ works, because we don’t sound like an old band. We have more forward-thinking elements from more recent bands. For example, the vocal layering on this album is very much inspired by Twisted Tower Dire or even Blind Guardian, which are not retro bands at all.”

With these references, Rogers quickly catches himself slipping down the infinite rabbit hole of heavy metal nerdom and laughs, “I probably have more opinions about this than you need to hear, but that’s my general approach to that ‘retro’ concept.”

Still, Rogers and his bandmates—guitarists Jamison Palmer and Lee Campana, bassist Matt Brotherton, and drummer Mikey T—weren’t even alive when many of the bands that influenced them were at their peak. “Most of us are in our 20s, so it’s been a lot of digging backwards,” the singer acknowledges. “But that’s what metal is—it’s in love with the past. The more you hear old albums and how the genre has developed, the more you understand bands that are doing stuff now.”

Rogers cites elder statesmen like Cirith Ungol, Manilla Road, and Britain’s Pagan Altar—all of whom fancy a bit of swords ‘n’ sorcery in their metallic epics—as key influences. Hence, the lyrics he writes for Visigoth are very much in tune with those of the old masters: Hoisting chalices, storming castles, wielding blades, etc. “With this kind of music, it doesn’t feel right to be singing about how sad you are about a relationship or something,” Rogers ventures. “Those things aren’t as triumphant. That said, fantasy lyrics can be used as a vehicle for saying more personal things in the subtext. You can just read it as a story and enjoy the swords and sorcery and knights and wizards and days of high adventure. It can just be an escape. But you if you wanna read it more personally, you can.”

What’s the subtext of Conqueror’s Oath, then? “It’s the promise we make to ourselves to conquer the adversity that life throws at us and to pursue our goals no matter how rough the road gets,” Rogers explains. “I wrote a lot of these songs during a tough period in my personal life. The specifics don’t matter, but it’s this reminder that you can conquer these things if you find your inner strength.”

Clearly, Visigoth’s strength lies in writing heavy metal thoroughly informed by the genre’s past. But even an encyclopedic knowledge of the timeless classics will only get you so far. “The history is so cool,” Rogers enthuses. “But you can’t fake awesome songs.”