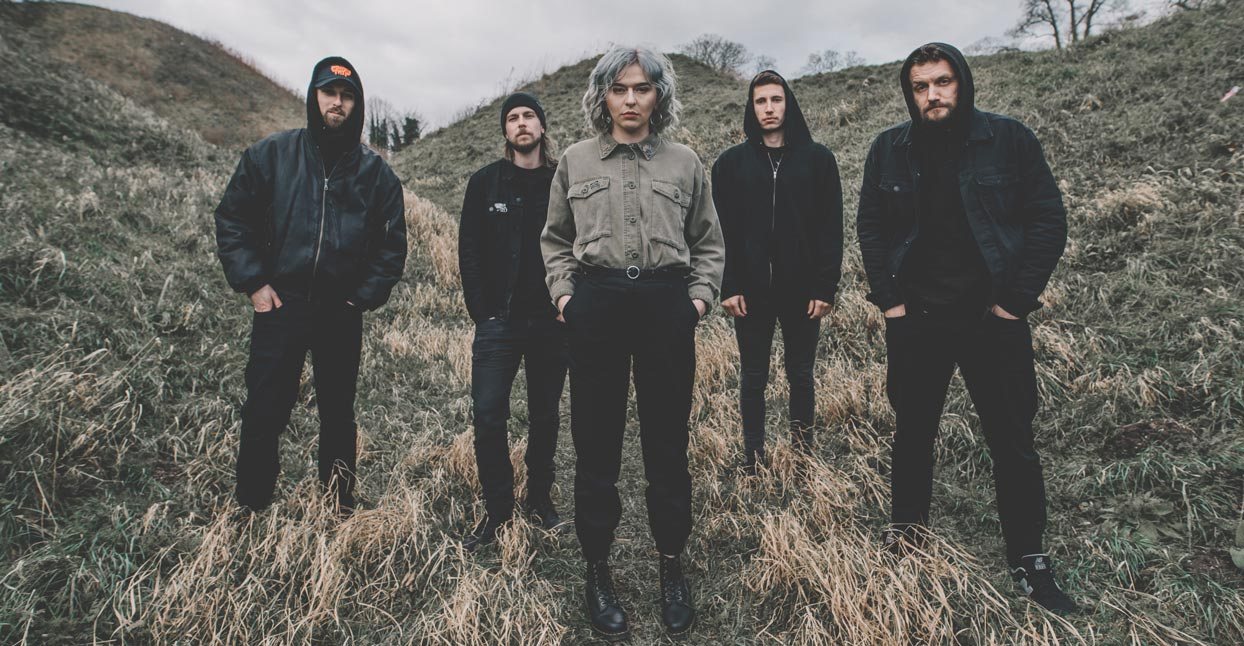 Narcissistic abuse. Forced surrogacy. Revenge fantasies. These are just a few of the topics Larissa Stupar addresses in her role as vocalist for U.K. death metal outfit Venom Prison. Over a blistering squall of guitars and drums, Stupar screeches, roars, and spits gut-wrenching vitriol against the largely male forces oppressing women around the globe. But make no mistake: Her stance is inclusive.

“I identify as a feminist, but I think feminism is not just for women,” she says.

Stupar is speaking with us from her flat in Leeds, where she recently moved after living in Wales with the rest of Venom Prison. She’s been residing in the U.K. for four years now; she was born in Russia and spent much of her life in Germany, where she was politically active with animal rights and Antifa groups. “In Germany, I personally think things are more fucked up when it comes to racism and active neo-Nazis, so it was kind of necessary for us to be active and go to marches and protests,” she says. “It doesn’t happen as much in the U.K., but we’re looking to work with some women’s rights groups.”

Stupar’s position at the front of a death metal band is an interesting one; death metal has a long and colorful history of lyrics that describe horrific violence against women. But Venom Prison’s aim is more pointed than merely demonstrating that a woman is perfectly capable of tearing it up onstage with the dudes—or even that the genre needs more women as a counterbalance to its misogynistic history. Stupar details scenarios in which the attacker becomes the victim. “My lyrics are less violent than Cannibal Corpse lyrics,” she points out. “But I don’t think people like to see me turning the tables.”

“Turning the tables” is the perfect way to describe the content of Venom Prison’s 2016 full-length debut, Animus. The cover art, done in fine neoclassical style by Israeli artist Eliran Kantor, depicts a male figure bleeding from the groin and being force-fed his own genitals by a group of stoic-looking women. (Despite its content, the painting is tastefully done; you don’t see the wound or the genitals.) The image ties in with the Animus track “Perpetrator Emasculation,” which is about a woman exacting poetic revenge on a rapist. “It was an angry record,” Stupar concedes, “but I’d say Samsara is even angrier.”

Samsara is the band’s second and latest album. The cover image—also by Kantor—depicts a woman being restrained (or supported—it’s a bit ambiguous) as eggs crawling with spiders pour from her womb. It’s a direct reference to leadoff track “Matriphagy”—which Stupar says is “about a spider that’s being consumed by its own offspring”—and “Uterine Industrialisation,” a song about forced surrogacy. “When we toured America last year, we listened to a podcast about commercial surrogacy in India,” she explains. “I wasn’t aware of that before, and it was really horrifying to hear about. Just the idea of exploiting vulnerable women who live in poverty and exploiting young families that can’t have children of their own… I couldn’t let the thought go for a while. I knew I had to write a song about it.”

Throughout Samsara, Stupar takes on issues like violence against the LGBTQ community (“Megillus & Leaena”), Brexit and electoral politics (“Asura’s Realm”), and narcissistic abuse (“Sadistic Rituals”). “When I was 17, I was in a relationship with a narcissist, and I didn’t realize it until the very end,” she explains. “I just felt really drained because that type of person likes to idolize, devalue, and discard. The song is basically my experience of being in love with a narcissist.”

Because her songs often point an accusatory finger at straight men, Stupar has to—absolutely unsurprisingly—become a prime target for Internet trolls and women-haters worldwide. “We’ve been quite outspoken lyrically about certain things,” she says with a laugh. “We’re definitely not the only band that does that, but I don’t think people like it—especially in extreme metal, death metal, and grindcore, where misogynistic lyrics are very common and nobody’s really questioned that before. We might be turning the tables, but if you look at it from the perspective of [the songs] just being about humans, it doesn’t really make any difference.”